After careful thought as to how to triage the issue behind the spectacular 100% failure of the run of 50 production boards (the ones which looked like the PCBs had been cut with a chainsaw), it turns out that Mike completely ignored that plan, and paid from his own pocket for higher quality single-panel PCBs.

By not doing what I had asked, it saved him money, but was also a risk on his part if these new PCBs turned out not to be functional. As it is Mike’s money (he offered to pay all costs for the failed PCBs), I did not want to say anything. However, if the boards did not work, we would end up with further delays and yet more investigation needing to be carried out. So, those 20 test PCBs were successfully completed a couple of weeks ago, and that just left testing to find out if they actually worked.

As I am now in a different country, with no lab equipment, it would have been pretty pointless to send me the PCBs for test, in Europe, only to find that they are not even recognised via USB as an MTP device for FEL booting using allwinner-tools fel-boot.

When I was in Taiwan, the shipping was neither costly, problematic, nor long (SF Express: three days, compared to four to six weeks start to finish for Europe). So, as to prevent delay, I asked Mike to first plug them into the secondhand laptop that my friend Adam kindly handed to him in Shenzhen, a year ago. The idea being that the boards showing up in lsusb is at the very least indicative that:

It’s such a simple thing to do and has a very high bang-per-buck, diagnosis-wise. 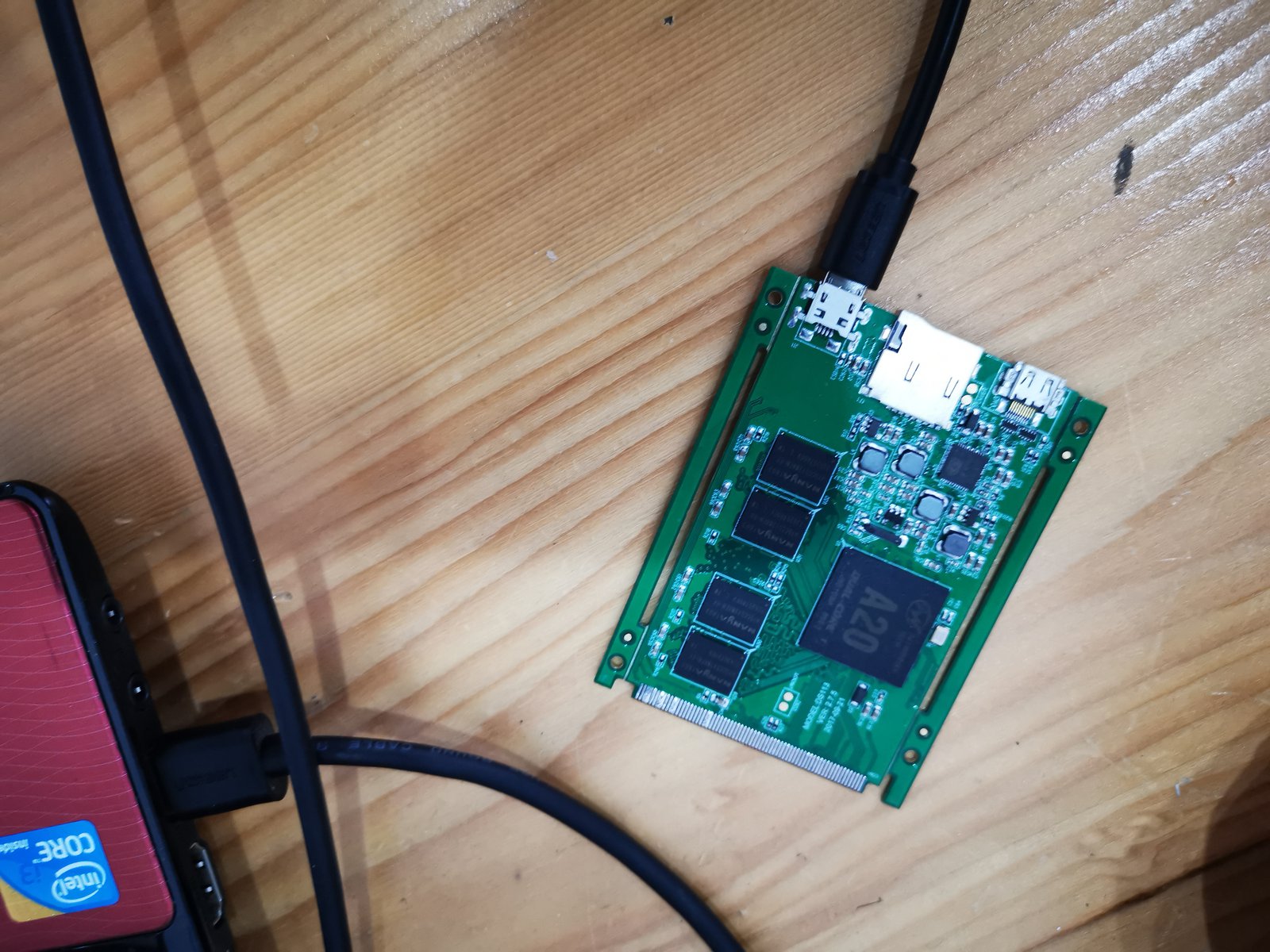 Mike therefore had to find the time to test the boards, having also a business trip in another city to attend to, he returned Monday. At 3:20 AM UK time I got an email from him with images above and below. He had the EOMA68-A20 card plugged into the laptop, had managed to run xterm, but had first typed isusb (i for igloo) and then 1susb (number one, not l), but not lsusb our actual desired command. 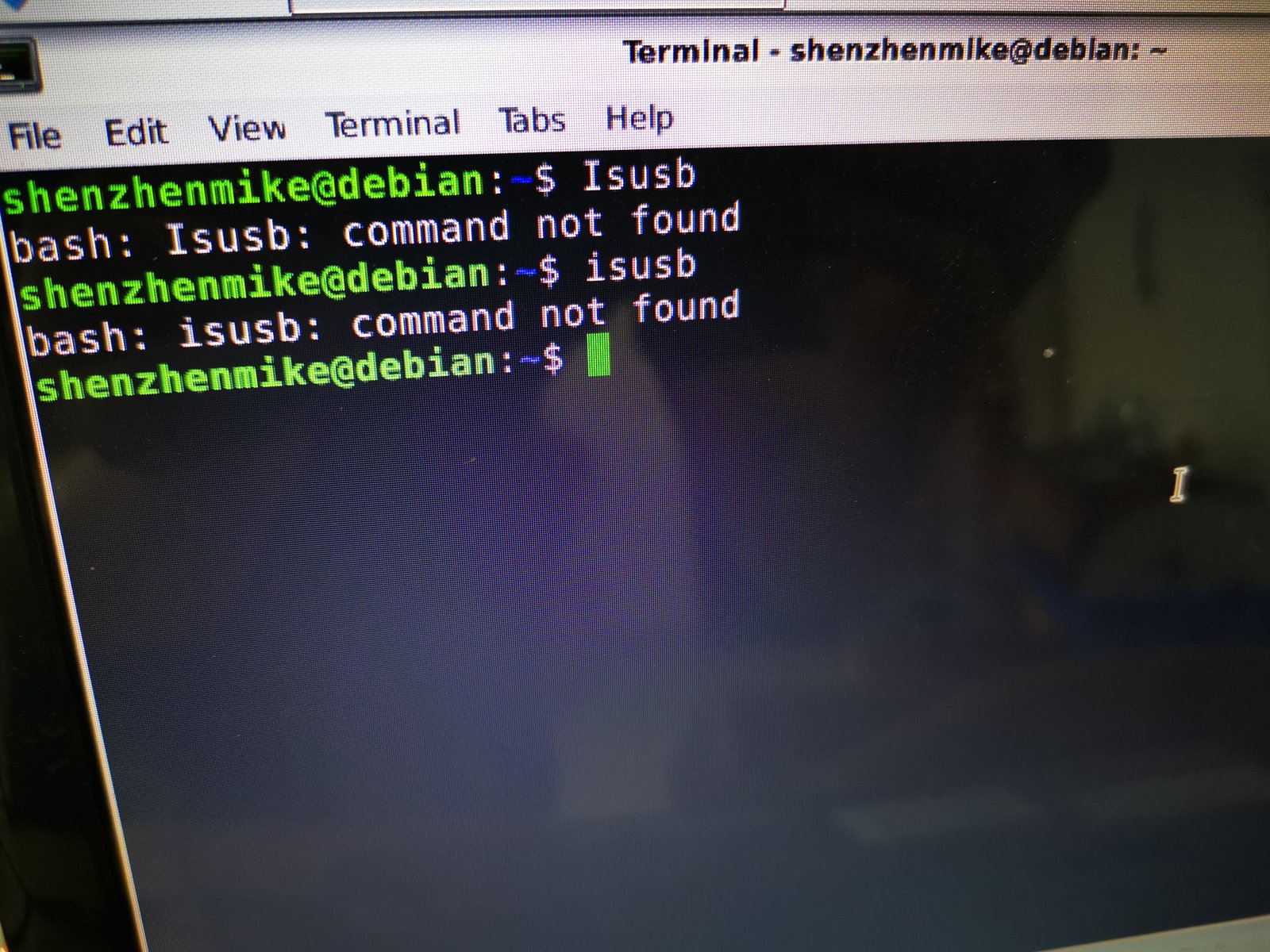 Variable-width fonts have a hell of a lot to answer for when it comes to commands. I know of very few people who can tell at a glance the difference between l, I, and 1. Yes those are all different - here they are again in a fixed-width font: l, I, and 1.

With Mike being active and in front of the machine 10,000 miles away, despite it being 3:25 AM, I scrambled to get a remote login over the VPN and backup ssh tunnel that I had set up on the laptop. It worked! (I always find this amazing, that it is possible to connect to inexpensive machines in a completely different country and do useful work).

And, right there in /var/log/syslog was evidence the card he’d plugged in had been detected on USB. Communicating asynchronously by email, we tried a second one and that worked too.

Hurrah. We have two working Cards, which used the exact same components from the production stock as were used before. That means it was either something that the new manager did, or, more likely, it was the chainsaw massacre. I suspect that the chainsaw cutting resulted in a short between two layers as the distance to the edge and copper had to be made very small (12 mil which is around 0.5 mm). The 24 MHz crystal, for example, is literally right on the edge of the PCB, with only a tiny amount of ground via protection.

Having passed these initial tests, it’s now worthwhile for Mike’s engineers to solder on the PCMCIA connector (you can see it missing from the photo), checking for solder bridges, and then sending the completed board to me here in the UK by FedEx, not DHL despite that being easier for Mike since FedEx does not have a presence in Shenzhen and instead use third-party agents. Still, FedEx is the better choice because they deliver and then invoice you a week later for customs duty. DHL will delay delivery until you have paid, often forcing you to go collect from the nearest depot, which could be 50 miles away. With the insanity gripping people at the moment, the less hassle the better. Ergo, FedEx.

The next phase, after I confirm that HDMI, SD/MMC, USB, and VGA are operational, will be to arrange a mini production run. We learned our lesson: it will be likely that we will do a QTY 100 production run, then, if that goes well, ramp up to the remaining 900.

One thing at a time. As as reminder to everyone who continues to ask, "when will this ship?" the answer is, as always, when all of the unknown and unknowable issues between now and shipping have been solved. Only when we have everything solved and have successfully gone through at least one shipping cycle can we give any kind of stable prediction for a given delivery. This is just how it goes, and your patience is so genuinely appreciated.