HDMI Review and Thank You

The pre-production EOMA68-A20 HDMI Revision 2.7.5 review is nearly complete and the capacitors replaced; Thank you to everyone who’s helped with funding.

Zowee this has been a massive bit of work. I had no idea that high-frequency layout was so complex just to analyse, let alone lay out. Future boards will be designed with this fact in mind, although the small space considerations still make it quite challenging.

Above is an image of just the Layer 6 (underside) tracks. Note how the separation from Ground (GND) is clean and precise? That’s because I discovered a really nice feature of the proprietary PCB program’s "Design Rules" that I had never used before: "Conditional Rules." Normally, clearances are set as absolute: there’s no arguing, all clearance to GND is 5 mil, all clearance to a component is 10 mil and so on. Yes there are priorities but nothing like the level of sophistication of "Conditional Rules." With this, I was able to say "For all HDMI tracks, only GND shall keep away by 15 mil," overriding the default for GND clearance to everything else. This is extremely powerful and is the primary reason why the 100 ohms impedance can be quickly and cleanly done… for the tracks.

The "Vertical" clearance has however had to be done manually: no known PCB design program in existence is capable of defining vertical clearance, so all the "holes" around the HDMI differential pairs have been done by hand, according to Richard’s guidance. We’ll have one last shot at it, one final check (this time of the gerber files) and that’s it, we’re done.

That just leaves the insane price hikes caused by Apple customers’ insatiable demand for iPhones. All 0.01, 0.1, 1.0, 10 and 100 µF capacitors have gone mental — a five-to-ten times price hike. The solution has been to replace 20 large 10 µF 0805 capacitors with 40 smaller 4.7 µF 0603 capacitors, all in pairs. Yes, really, it significantly lowers the cost of the board. 0.1 µF capacitors…. honestly I don’t think there’s going to be room to double-up: there’s something mad like 40 of those already and I don’t believe it’s going to be practical to replace those with eighty capacitors of the same size.

Below you can see (yellow outlines) the pairs of 4.7 µF 0603 capacitors that have all been replaced. All of these are for making sure that the power lines are stable (3.3 V, 5.0 V, DDR3 power, CPU power, 2.5 V power, RTC power - it’s a huge list). You need two capacitors on the input side, and two capacitors on the output side. It gets pretty comprehensive! The thing is, this will actually hugely stabilise the power rails because two capacitors can handle much higher current than just the one, so overall it’s been a big improvement. 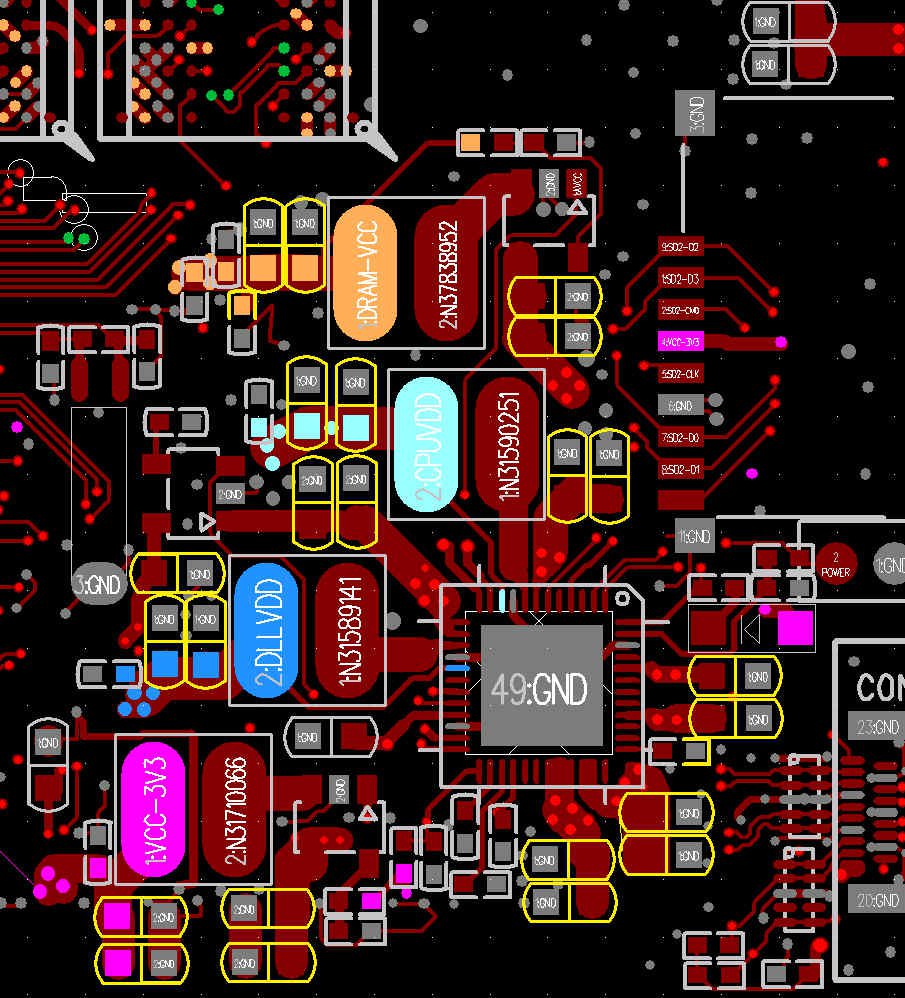 I want to get the 2.7.5 board done and out the door, it will run into Chinese New Year soon: if the PCB can be done in the next seven days, it should be manufactured and assembled pretty quickly, possibly even before February 14th. If, however, it’s left a couple more weeks it will actually be better to wait until after February 14th. We’ve had problems before with boards being done under time pressure: not doing that again.

I have to say I am deeply grateful to everyone who contacted me with ideas, suggestions, and loans. These included:

There are a few more, extremely good ideas for which I am really grateful. I will link the bitcoin address and LiberaPay account on the rhombus tech website when I can. All and any help appreciated: it all helps accelerate the plans that are underway.

One private message in particular stood out and I found particularly touching and inspiring, so received permission to share it with you:

You asked in a recent EOMA68 update if anyone had ideas about financial support. I’d like to encourage you to adopt a very simple approach, and simply request support. This could be through a crowdfunding effort such as gofundme or through an ongoing mechanism such as Patreon (I recall there’s a Free Software application in the works, but I don’t remember what it is or whether it’s ready for use). I would certainly contribute, although I alone probably wouldn’t be able to contribute enough to be sufficient. But if there are others like me…

I consider you to be an agent for Free Software and Hardware development and would like you to be able to make your contributions to a Free Software society. And a more environmentally-friendly society. I contribute to certain Free Software projects for applications and OS’s that I’m already using. I’m not buying a product; I’m supporting development. I would apply the same concept to you.

You might think that this is "cheating," that people implicitly paid for your personal upkeep by supporting the project, and so asking for personal support is some sort of double-dipping. I would posit that most project supporters didn’t click the button thinking, "I’m paying Luke to do the work developing this," but rather primarily thought, "I’m paying for materials and use of expensive industrial processes." But you need to eat! You could easily get a job with an electronics or software corporation, and then where would we be? Would the community prefer that you were spending only Saturday afternoons working on the project, or working on it full-time? I believe we in the Free Software world really have to get out of the habit of thinking that the useful work gets done gratis.

Here is a stark reminder of what happens when people forget about Software Libre Developers:

There are more, including examples (Luc Verhaegen is one of the most well-known) where corporations are actually actively working to destroy their reputation and undermine their work.

About 10 years ago I realised the concept of patronage, which was hugely and widely recognised up until Victorian times, at the height of the Industrial Revolution, was absolutely critical to sustaining the momentum of development and learning. Businessmen keenly recognised that if they were to make money, they needed to fund creative people to push the boundaries of science… either for its own sake to benefit society as a whole (they were rich enough so they could do that), or to invent something that they could potentially financially exploit: it doesn’t actually matter which.

Up until crowdfunding became mainstream, that habit was entirely broken around the Thatcher and Reagan era, and the momentum is now building towards steam-rolling basic common sense and human dignity. There are however signs even amongst the Software Libre Community that key people such as Joey Hess are incredibly valuable to support, just as the anonymous person above describes. You are probably reading this right now either at a job that pays your bills, or you are at home with your family and will be going back to work at a job that you know pays your bills. This is incredibly important as without you doing that job, simply put, the "wheels of the world would not turn."

Yet it leaves you and hundreds of thousands of people like you - personally - unable to focus on goals that both require 100% mental focus and would, if there were people working on them, make a huge improvement in the quality of people’s lives and also turn around the unethical runaway train-wreck that technology is rapidly becoming and make it the much more positive and beneficial ethical tool that we’d like technology to be.

People such as myself who come up with amazing ideas that would normally be funded by VC investment cannot apply for standard VC funding because it conflicts directly with our ethical values which are not up for negotiation. Yet at the same time, we cannot get jobs like you have without essentially abandoning those ideas completely.

So. That anonymous advice was very good. I will keep it simple. Help support my work. Here are the ways you can reach me: