The first book in a series of illustrated novels created by author/illustrator Cameron Scott Davis who set out to create, "The kid's book I wanted to read as a kid."

Getting close! Overcame a major hurdle in the manufacturing of the book last week. I have a 3 page foldout that needed to land at a certain page number in order for it to glue into the correct place between signatures (book lingo!). Point being, we came up with a solution that required me to complete only 2 extra pages of material to fill the void. Hooray!

This attached image is an exclusive first look for Crowdsupply backers only. That is I won’t be posting it to facebook or twitter etc. anytime soon. 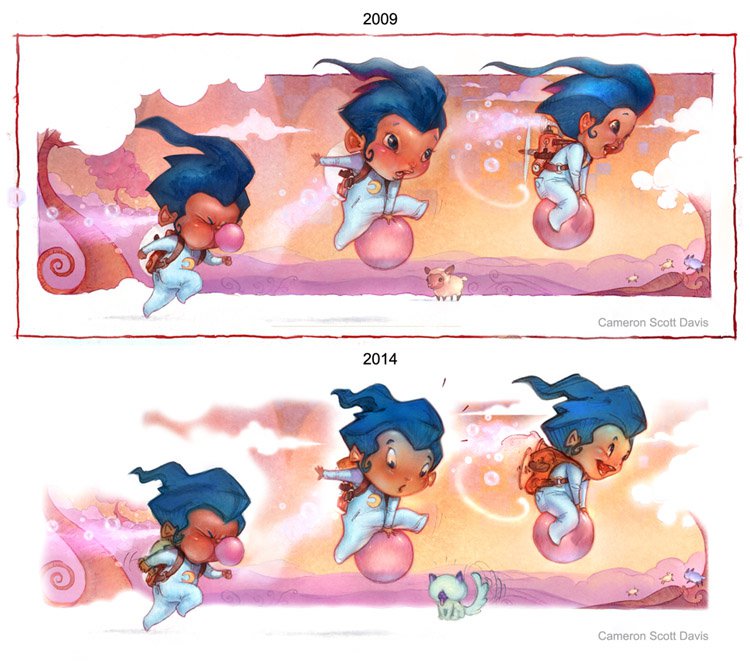 In the process of wrapping things up for this first printing I found an old image (from 2009) that was a style test of sorts. At that time I had yet to sit down and actually design the character of Finnegan (who you will be introduced to in book 1) and I was toying with the tone, process, and how much detail to go into for the look of the Sleepwalker series. I hadn’t even yet written the pillowpuppy Nimby character into the story seen in the background, so originally it was a lamb. Perhaps the 2014 image of Finnegan jumping onto his floaty gumball feels more mainstream but my original concept of “illustrated children’s book naivete” felt a bit awkward and distracting for this particular illustration and the design had changed so drastically that things needed to be redone in many cases.