Our Campaign Is Now Live on Crowd Supply!

It’s been a year in coming, but at last: you can back Sensor Watch on Crowd Supply and get one of your own! Sensor Watch is a board swap for the classic Casio F-91W wristwatch. It replaces the standard quartz movement with a brainy ARM Cortex M0+ microcontroller, the Microchip SAM L22, and a flexible accessory port for adding different kinds of sensors to the watch. With its extremely low power draw and classic LCD display, Sensor Watch lets you wear a hackable technology platform all year long (estimated) without recharging or replacing a battery.

You can use Sensor Watch to display information from one of its built-in watch faces, like the clock, sunrise/sunset, or beat-time display, and switch between these modes with ease. But the power of Sensor Watch comes from you: with its simple C-based API for building watch faces, you can code any watch face that you want to wear on your wrist. Do you have an interest in astronomy? You can make a watch face that predicts satellite passes. Astrology? A watch face that tells you when Mercury is in retrograde! You can even design your own sensor boards to add additional hardware-level functionality to the watch; if you want the watch to act as a compass, you could add a magnetometer right inside the watch case. 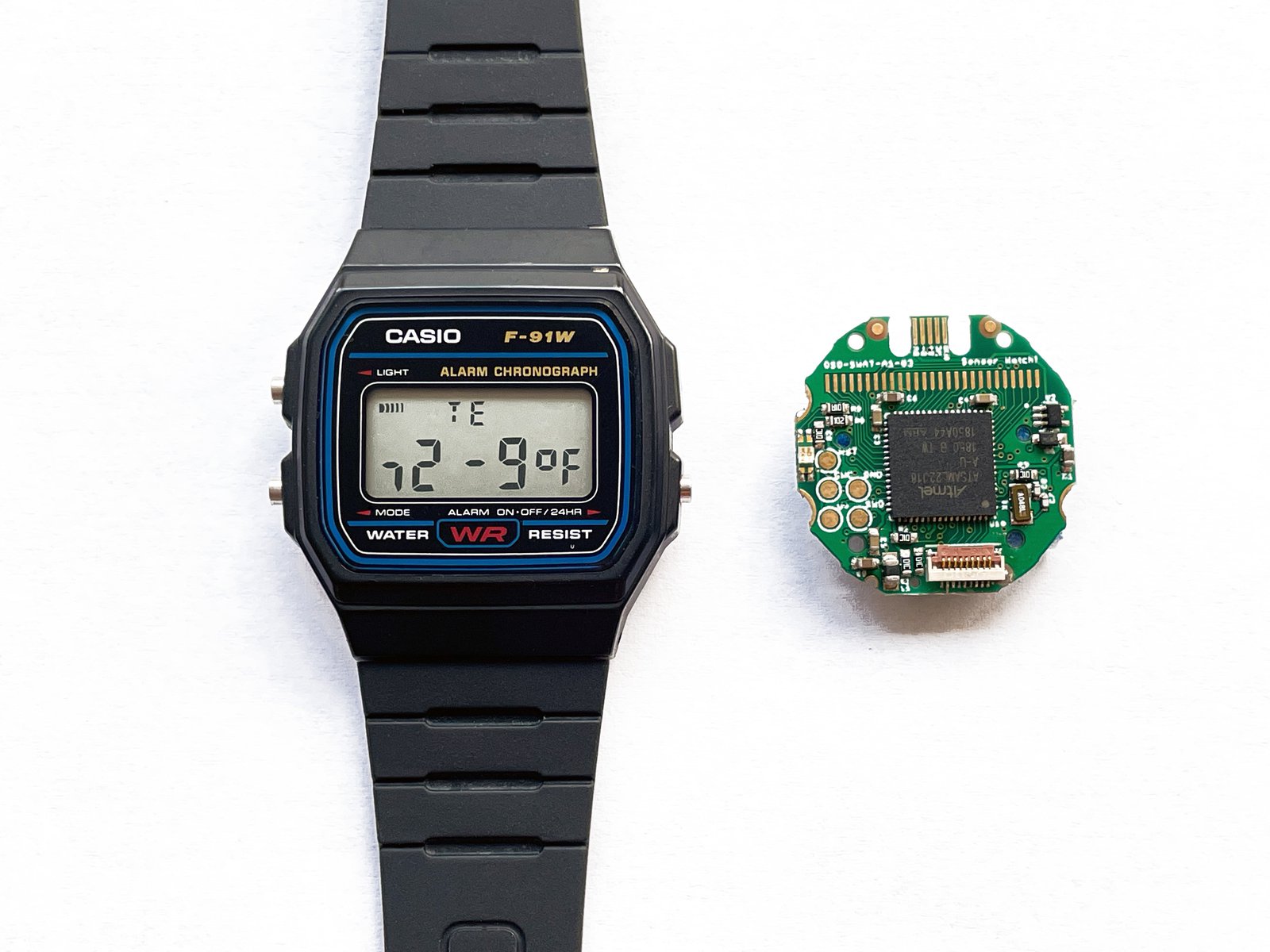 We’ve been working with Crowd Supply to figure out the best way to bring Sensor Watch into the world, and we’re thrilled to share that, at launch, Sensor Watch will come with a free temperature-sensor accessory board! This board uses a precision-thermistor voltage divider to measure the ambient temperature. Strap the watch to your bike’s handlebars to measure the temperature on a ride, or toss it outside your tent on a back-country camping trip. Sensor Watch includes both a real-time temperature display and a logging mode that stores 36 hours of temperature data for later review.

When our campaign goes live, it will include 100 "Limited Edition" Sensor Watch boards. Though we’re offering them for the same price, these boards are unlike the rest of our production units. For one thing, they’re blue instead of green. But that’s not all! The LED in the Limited Edition glows red, blue, and pink rather than the red, green, and yellow of the Standard Edition. That’s pretty cool. But you know what’s even cooler? We already built them. These boards are from a small run made during the depths of the 2021 supply-chain crisis (read: when I couldn’t get my hands on a red/green LED to save my life). Once they’re gone, they’re gone.

Come Have a Look!

Sensor Watch has been a passion project of mine for some time now, and I’m thrilled to be making this hardware available to you all. Over the next few weeks, I will be sharing additional Sensor Watch use cases and diving into how it all works, which will include tips on designing your own watch faces and sharing them with other members of the Sensor Watch community! But for now, I’ll invite you to take a look at all that Sensor Watch has to offer and consider backing our project!