It is time to give a sign of life to keep communication up and to let everybody know about the current progress. As explained in the previous update, these weeks I am mainly just waiting for suppliers to get the stuff I ordered to me. Once I have everything, I can pack, and then I am ready to ship. That "waiting" is the main reason I haven’t had anything major to report recently, but that doesn’t mean that nothing has been done. Only, instead of spamming you with 2-sentence updates about "hey I’ve got another shipment", I decided to collect all the small things together in an update that has a worthy length. So, what do I have? The first independent video review of the μArt, documentation updates, shipment status, and lot’s of pictures of things nobody really cares about.

First of all, Mick from MickMake has taken a look at the μArt. I sent him a unit from the 10 sample pieces I have, in the hope that he’ll let us know what he thinks. In the bag I sent him, there was a finished μArt, a cable kit, and a printed copy of the datasheet and schematics. I’ll let him tell you the rest himself (starts at 12:54 into the video):

Speaking of the datasheet, I have updated it for the new hardware and I now consider it final. No further updates to it are planned (but changes of course will happen should they be deemed necessary). There are also new documents on the website, like the conformity declarations for Europe and the US, and the complete lab test report that I’ve promised you last time. The latter is in Hungarian, sorry for that, but if you’d understand the contents of an English report, you’ll understand this one too. The graphs, the images, the tables of applied standards and equipment used, are all the same after all and so to say language-agnostic, and there’s not much else in-between. There is also a tiny "Usage Notes" brochure, very minimalistic and to-the-point, which will be included in a printed form with every package I ship out. You can download all the above documents, and more, from the μArt’s micro-site.

So when will I ship out? The current ship date (which has remained for many weeks) has been Dec. 29, that is, by the end of this year. While there’s no change in that yet, I have to admit things are cutting it really close, mostly because there has been a delay with the PCBs. They were all already manufactured (the complete batch!) when it was discovered that the manufacturer didn’t use the right materials for my CTI requirements. Thankfully they weren’t assembled yet so I’ve still got all the components, meaning there’s no problem with stock or supplies. Still, the re-manufacturing of the PCBs translated to an unforeseen delay of three weeks, which makes it uncertain whether or not they will still get assembled this year. I don’t have a definitive answer from the assembler yet, so until further notice, the current shipping date still holds.

Similarly, the F-F cables (those are the split ones) are three weeks late. One of those weeks was due to a payment complication, but all that was sorted out long ago. The other two weeks… I am not so sure, I guess the manufacturer is just really busy at the end of the year? Anyway, I am pretty positive I will get these cables in the next two weeks, which is plenty ok.

So, the electronics and one of the cables are still missing. Anything else? Nope. Everything else is here. With. Me. And in quantities.

The enclosures are a real beauty. The modification was worth it as the labels are now crystal clear. 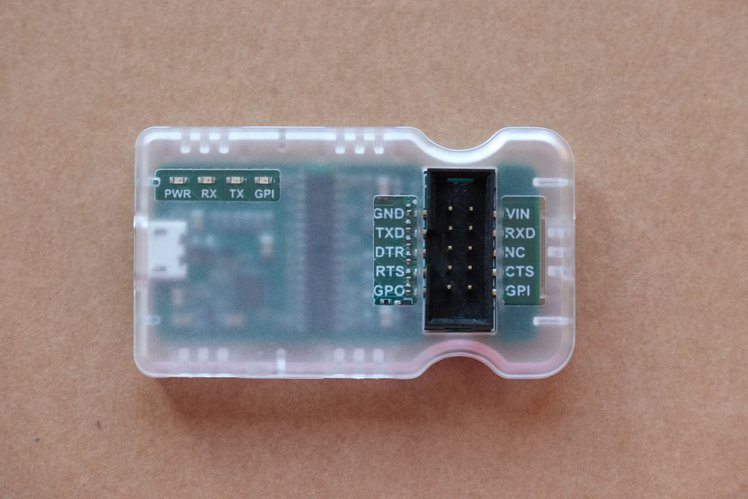 And I’ve got three boxes of them like the one below. 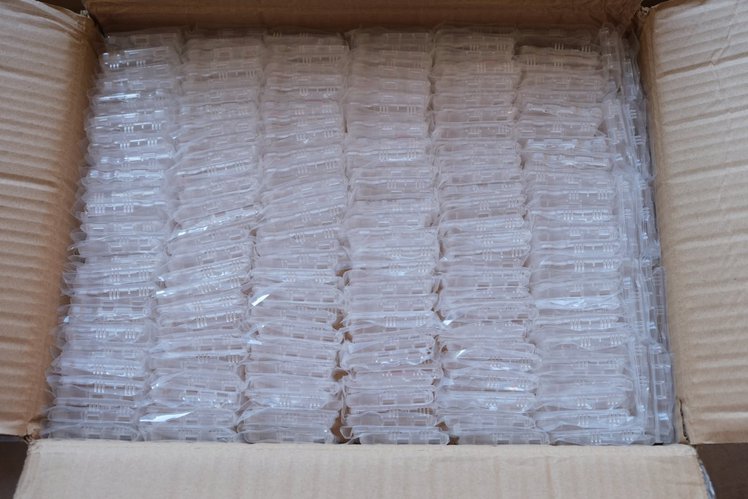 Of course the other two parts of the cable kit, the USB and the F-M cables, are here too. 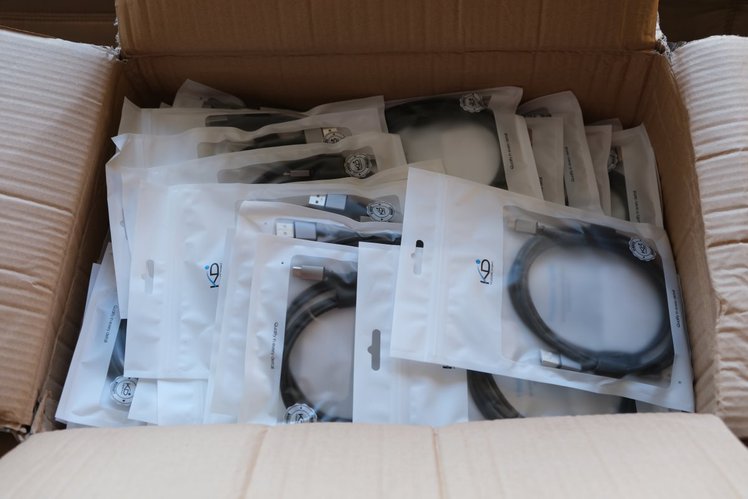 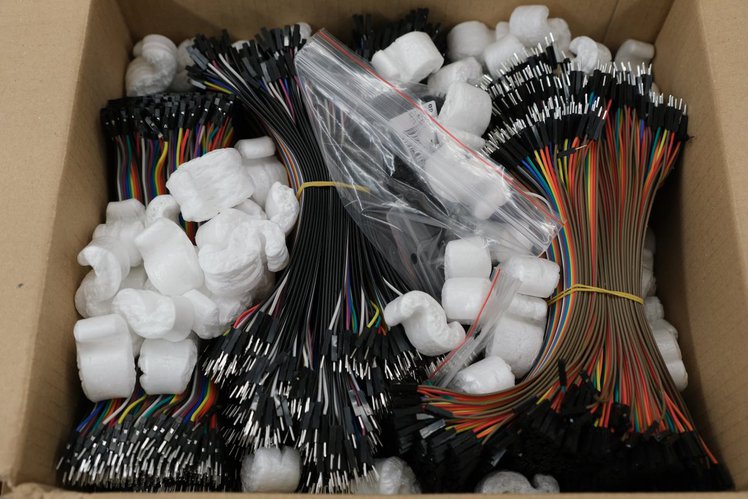 I’ve also got most materials for packaging, like the anti-static bags or the desiccants. The tiny brochures I told you about a few paragraphs earlier is at the printer right now. 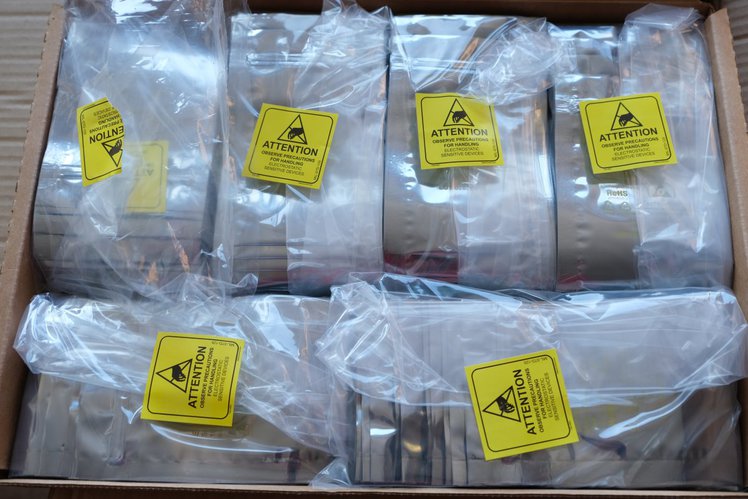 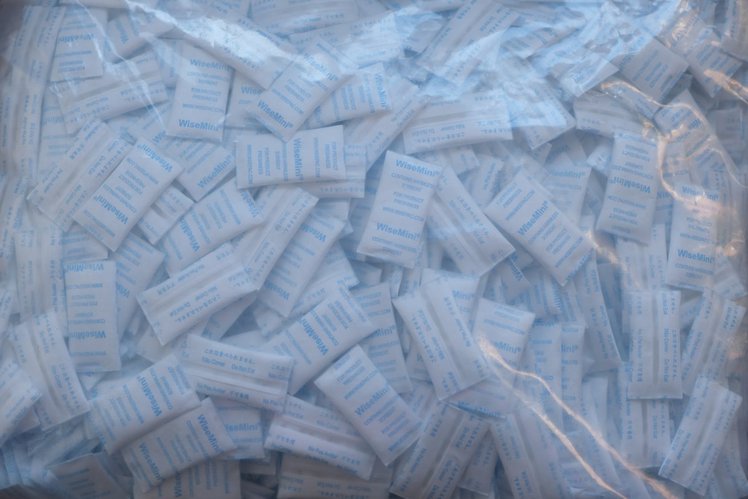 Heck, I’ve even bought the addressing labels for the packages I’m going to ship. 1800 pieces are ought to be enough, right? I got them for a good price during Black Friday XD 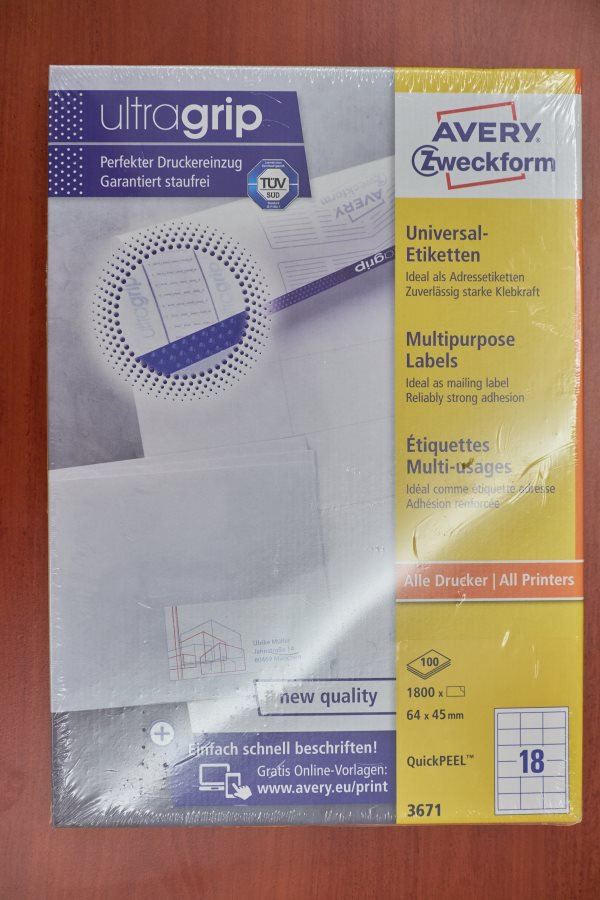 Well, that’s it for now, you know everything. Hopefully the next time I sign in will be to inform you that even the electronics and split-cables have arrived, and that I’m beginning to pack them for shipping. Wish me good luck, I wish you too. Until next time!