Raptor Engineering is pleased to announce that Talos™ is back and better than ever! Raptor Computing Systems is bringing the all-new POWER9-based Talos™ II to market at a very affordable price point, with first shipments occuring this year near the official launch of the POWER9 processor line. As before, Raptor Engineering is the driving force behind the design, and we treat security and owner control just as seriously now as we did before with Talos™ I. 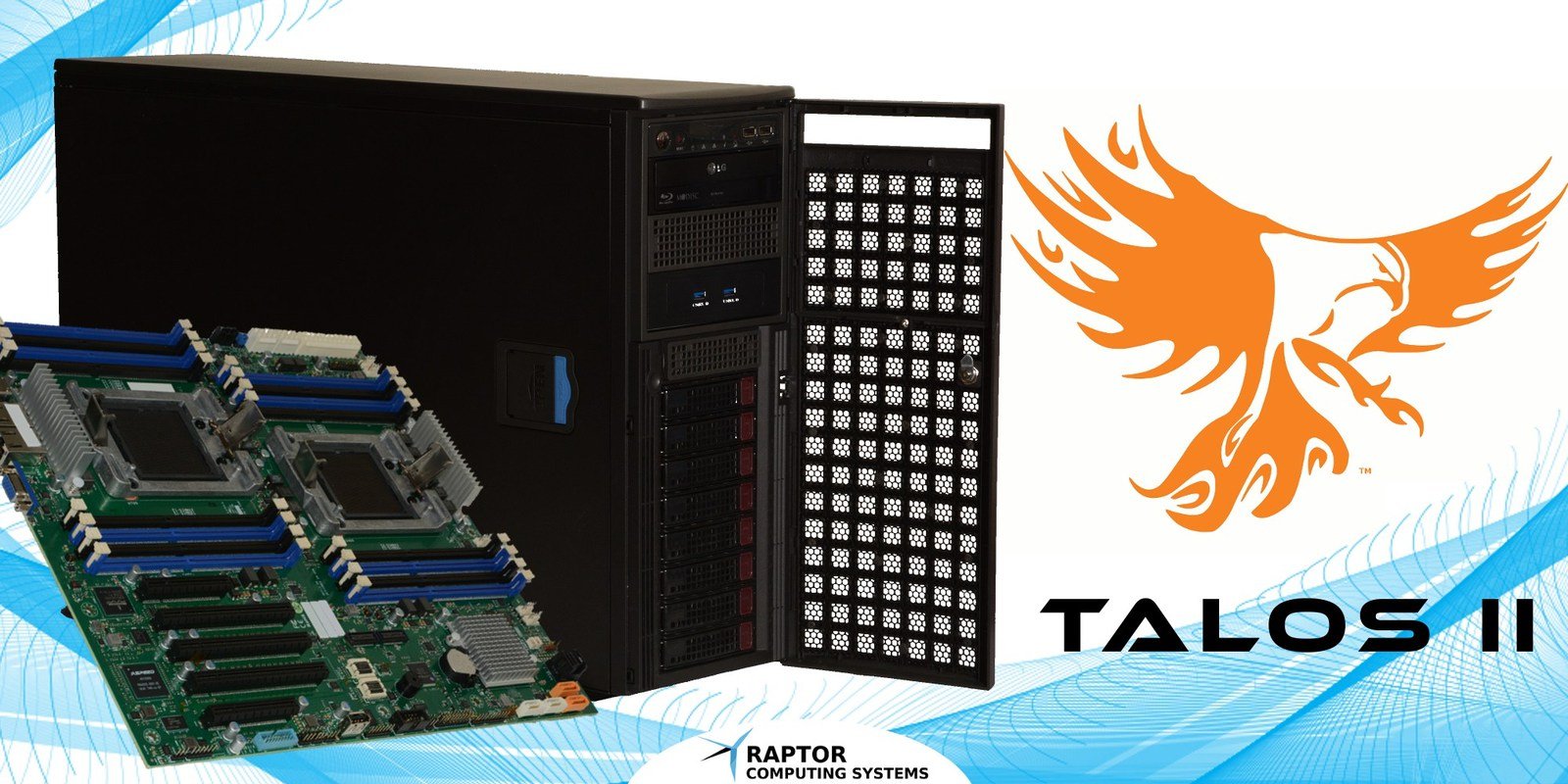 What is Talos™ II?

Talos™ II is a logical extension of the original Talos™ I concept, adjusted to fit the current market. It retains the same committment to owner control and security as Talos™ I, while bringing brand-new state of the art technologies such as PCIe 4.0, CAPI 2.0, and DDR4 to the table. Best of all, thanks to improvements in the POWER9 CPU, not only is Talos™ II less expensive but it also consumes less power while increasing speed over POWER8! Each of the Talos™ II 4-core CPUs is rated at only a 90W TDP, lower than comparable AMD server COU offerings.

Talos™ II being offered in a variety of configurations, from the bare mainboard and related parts all the way up to fully assembled, certified workstations and enterprise-class rack mount systems.

Although we have Talos™ II hardware in our labs, IBM has not yet released the POWER9 CPU to the general public. The POWER9 launch is scheduled for Q4 this year; Raptor Computing Systems intends to make Talos™ II available to everyone shortly after POWER9 launch via their pre-order model. This model allows them to manage supply of the Talos™ II systems for Q4 shipment, and they intend to transition to a more standard ordering model once the POWER9 processor has reached general availablility (GA). Orders placed after their pre-order cutoff will not ship until 2018, and you would be missing out on the benefits of early market access to the POWER9 processor, so we strongly recommend that you place your pre-order as quickly as possible!

Where can I learn more about Talos™ II and why OpenPOWER is vital to libre software?

Raptor Computing Systems has put together an FAQ page that addresses many of these questions. In addition, there is a public interview discussing Talos™ II and the rationale behind it available here. In a nutshell, from the proven ME exploits including, according to some researchers, the NSA itself deeming the ME a security risk, to AMD’s entire lineup now shipping with the PSP forcibly enabled on all CPUs from Ryzen to EPYC and Threadripper, to the increasingly closed and locked down nature of x86, we feel the time is right more than ever for the Talos™ II systems to come to market. For those not requiring the use of proprietary sofware, Talos™ II is an easy switch thanks to IBM’s efforts to build a next-generation boot firmware far exceeding the capabilities of other platforms such as ARM. In fact, if you already use libre software, you probably won’t even know you’re using a Talos™ II versus an x86 workstation except by the massively increased performance and cutting-edge security — it’s that easy to maintain and develop for!

I want one! How can I pre-order?

Simply visit the Talos II product page at Raptor Computing Systems, select the product(s) you want, and follow the instructions. Pre-orders placed by the middle of September will ship this year. Credit cards and bitcoin are accepted, and business customers are welcome to submit a request for quote for quantity purchasing.

Thank you all for your interest in Talos™ I, and we hope that you are as excited as we are about the all-new Talos™ II!