We have been making some hard decisions about what we produce and send out to you (backers) for the last two weeks. Some of the design changes are outlined in the update below.

We have had a few revisions with the SAMD51 since the last update and are now happy that it is up to the standard we wanted. There were a few problems regarding which pins we were using for different functions, but they have now been resolved with the latest revision.

In addition to the SAMD51 support, we are still backwards compatible with the SAMD21 we were using in the past. We have included pads on the board to make it possible to switch between these two different processors - which is very cool. We don’t think any other CircuitPython board is able to support multiple processor editions with the same PCB.

We removed the USART connector from the design. The reason for this is two fold; it created a huge double-up of pins on the Radio Control Channel (RCC) pins and we wanted to support more sensors.

Quick Note: You are still able to use the RCC pins as a USART interface - it is just not on a separate connector.

We are recommending that if you want to connect a serial UART sensor to the board that you use the GPS connector. This connector still retains it’s UART functionality.

To support more sensors we have teamed up with the electronics distributor SeeedStudio and added a GROVE connector. Read on more more information. 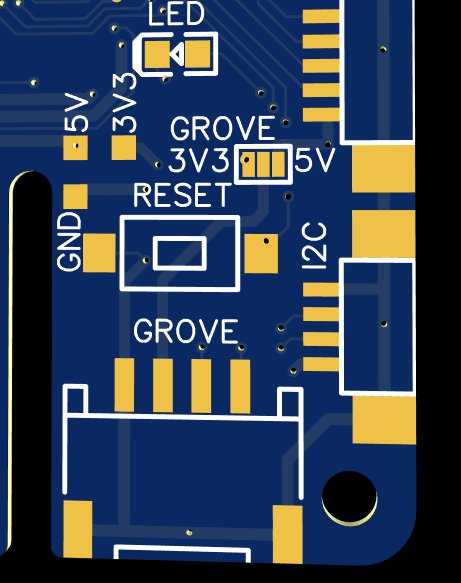 Grove is a modular, standardized connector prototyping system. Grove takes a building block approach to assembling electronics. Compared to the jumper or solder based system, it is easier to connect, experiment and build and simplifies the learning system, but not to the point where it becomes dumbed down. Some of the other prototype systems out there takes the level down to building blocks. Good stuff to be learned that way, but the Grove system allows you to build real systems. It requires some learning and expertise to hook things up.

Why change to GROVE?

The GROVE system is made up of standard sizes. There are hundreds of different sensors and components available from SeeedStudio that are part of the GROVE system. They range from education applications to autonomous vehicles and beyond into AI.

We have always been education focused with our projects, so it was a logical step to add on a connector that was able to connect the Robo HAT MM1 with many many other sensors.

To our knowledge, this will be the first CircuitPython-compatible board using the GROVE system. So you will not only have access to hundreds of new sensors, but be backed up and have access to the thousands of CircuitPython Libraries maintained by the Adafruit community that interface with them!

It’s a win for everyone!

What if I want to connect something else to GROVE?

Sure! We are not stopping you. The connector has the following pin out:

We are looking into providing the cables to do this but need to discuss with SeeedStudio.

We have now finalized the board design with all the features we want to ship out to you (backers). The next step is to test this final revision of the board and fix any left-over defects (if any). We are also testing that all the software we promised will work when you receive the board.

We expect there to be a small delay in the delivery to backers. We are trying to get all boards delivered in the first half of September now instead of the originally planned August 22nd. The reasons for this change are the following:

Thank you for following along with the project. We look forward to updating you again soon.