Fully funded after only two days into the campaign — absolutely amazing! :) Very thrilled with all the support, thank you very much to all backers!

Now let’s see how far we can take this momentum, with another 44 days to go in the campaign. I’m not very adept at the social media game, so if anyone would like to make some noise about this on Facebook, Reddit, or some other place, that would be very much appreciated.

I’ve received some interesting questions and comments already, which I’d like to share for the benefit of other backers.

Several questions were about using the LiFePO4wered/Pi+ powered from a solar panel.

What’s special is that the LiFePO4wered/Pi+ can also be powered directly from solar panels that do not include any conditioning, since it features a Maximum Power Point charger on-board! This opens up your choice of solar panels to a much broader market. You just need to make sure that the open circuit voltage of the panel you use does not go above 20 V. Also, to maximize efficiency, you can add a resistor to customize the Maximum Power Point of the charger to that of your panel. Your panel specification will likely provide a value for Vmpp, use the formula at the top of page 17 in the LiFePO4wered/Pi+ Product Brief to calculate the value of the MPP resistor and then use a standard value that’s close.

The best solar efficiency can be obtained either by using a USB output solar panel with conditioning that includes MPPT and a battery, or by using a bare panel without conditioning and letting the LiFePO4wered/Pi+ take care of MPPT by adding the MPP resistor. A 5 V USB output panel without a battery is limited in what it can do to keep the panel at its maximum power point and will be less efficient, especially in non-ideal light.

Below is an example of a demo system charged by a 6 W panel from Voltaic Systems: 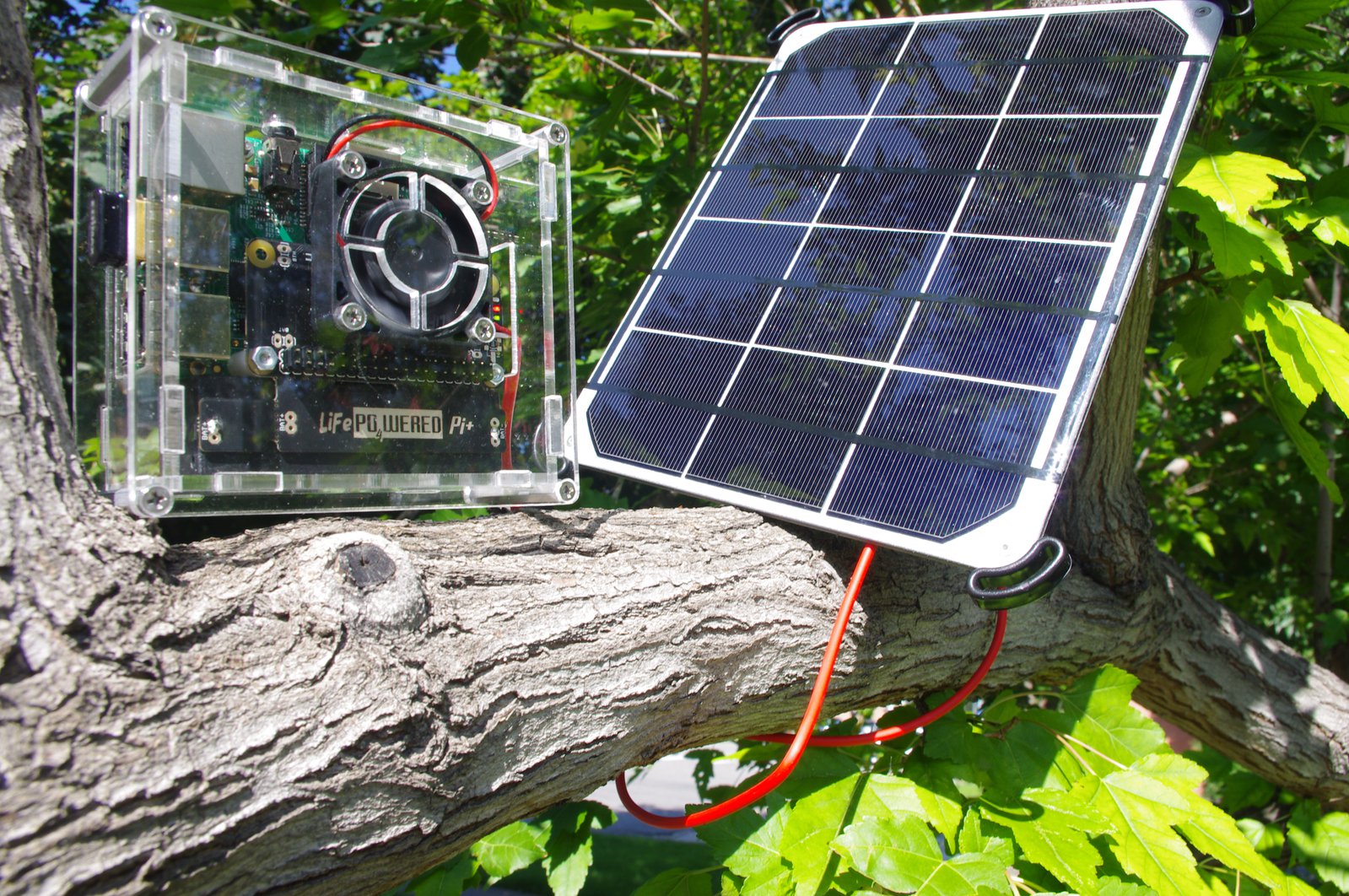 Someone else helpfully pointed out that the official 7" touch screen takes over the I2C bus when connected. As mentioned in its documentation:

NB: With the display connected to the GPIO I2C pins, the GPU will assume control of the respective I2C bus. The host operating system should not access this I2C bus, as simultaneous use of the bus by both the GPU and Linux will result in sporadic crashes.

It’s really unfortunate that the display does this. The LiFePO4wered/Pi+ itself is a good I2C bus citizen, only claiming the bus while it’s actually communicating and leaving it available for other applications for the rest of the time. Since it’s a bus, it’s supposed to support this sharing between applications. Since the touch screen claims the I2C bus all for itself, the LiFePO4wered/Pi+ will likely not work correctly with it.

Another commenter mentioned that "many of the other Raspberry Pi power supplies of this nature have a brief brownout when shifting from USB to battery power that causes a reset of the Raspberry Pi" and wondered whether the LiFePO4wered/Pi+ would "support no-dropout transitioning from USB powered to battery powered and vice versa."

The answer is yes, this is a true UPS solution and there are no transients or brown-outs when external power is applied or removed! In fact, I would be ashamed to call it a UPS if it could not provide this very basic functionality.

In the LiFePO4wered/Pi+ design, there’s a single power path with smart current sharing between input, battery, and load, and no switching occurs when external power is applied or removed, so no switching artifacts or brownouts occur.

Another question was about larger batteries. The LiFePO4wered/Pi+ was designed with larger battery usage in mind. The on-board battery can be removed (the battery holder part of the PCB can even be snapped off along the perforations) and a larger battery connected to the BAT through-hole pads. Just make sure it’s a 1S 3.2 V LiFePO4 cell; other lithium-ion cells are not supported. And make sure the "1.5A" solder jumper is bridged to enable the highest charge current.

Here’s a sample of a solar powered test system with a custom LiFePO4 pack made from six APR18650M1A cells: 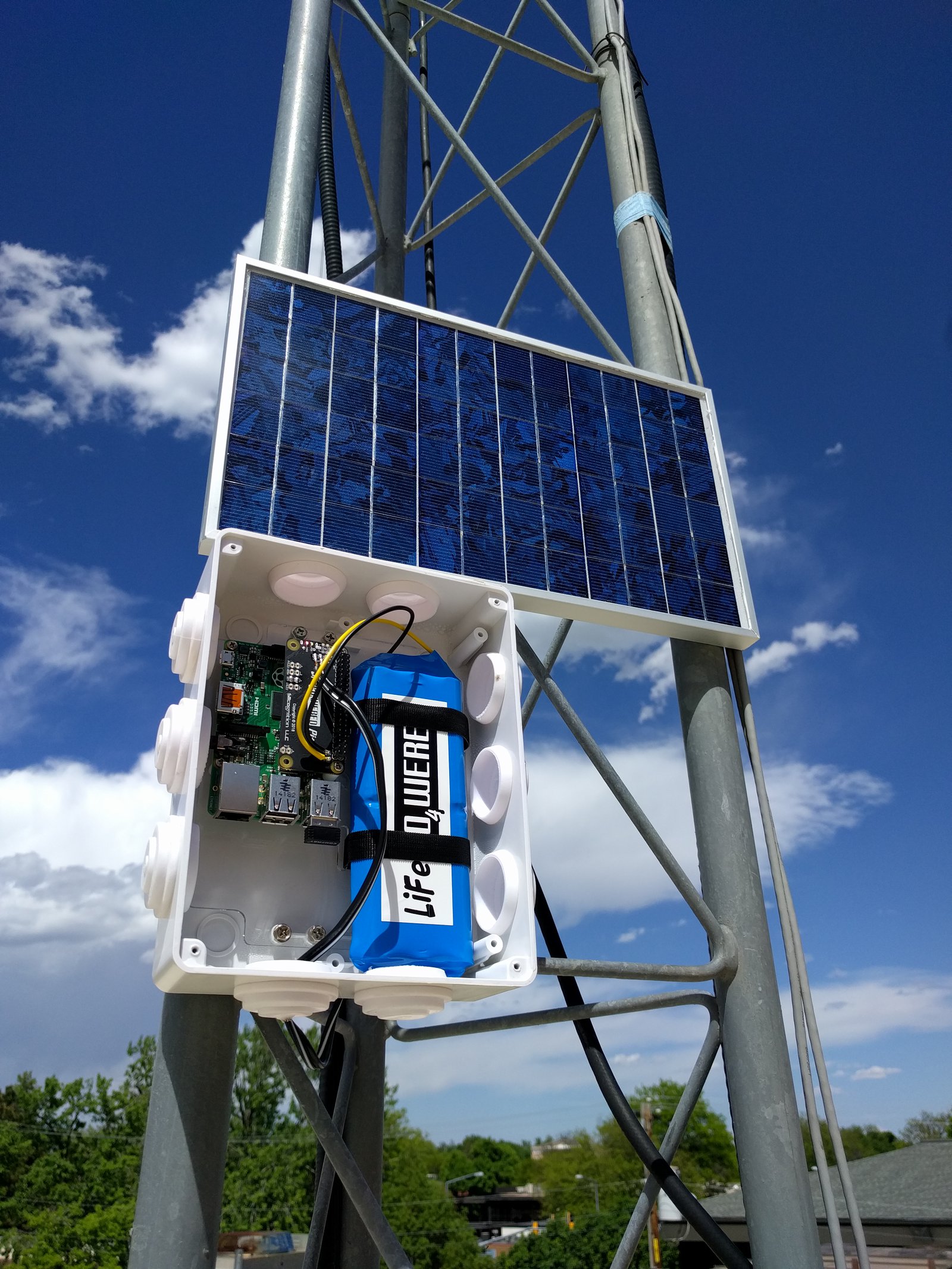