Team Kosagi has just returned from China where we were, among other things, checking up on Novena case production and making sure quality was up to snuff. 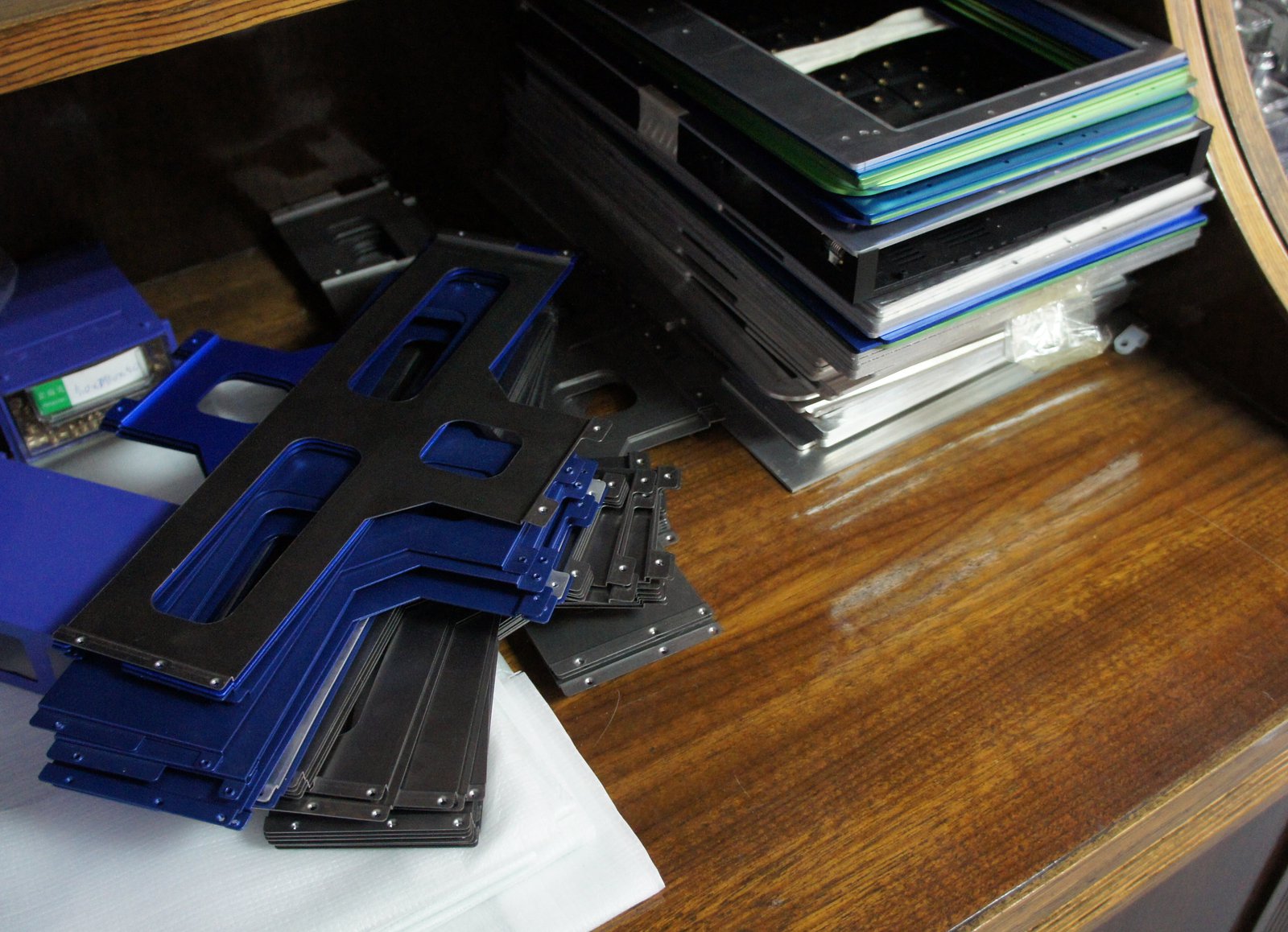 A stack of trial material

Above is just one illustration of why, as a general rule, it’s not economical to do the production of laptops on the scale of a few hundred units. This is a stack of scrap material from various trial runs we’ve been through, iterating on the LCD bezel and holder.

In the background, you can see a stack of LCD bezels. The stack includes material used to trial CNC tolerances (in the end, we had to laser-cut the bezel outline to achieve the required tolerance), process capability development (the first ones weren’t cut on a 5-axis mill and thus had no internal bevel), as well as some anodization color targeting samples.

In the foreground, you can see a stack of LCD retainer brackets. These went through several iterations of metal thickness, alloy, and slight design variations until we managed to solve most of the problems. At some point the engineer in us has to step aside, stop pushing for perfection, and ship the product. We have promises to keep, and miles to go before we sleep, and miles to go before we sleep (apologies to Robert Frost).

This pile is just one of many piles of scrap, each one representing an appreciable fraction of total production volume. This is just one of the many reasons why the Novena laptop is not targeted at the low-end market.

On the bright side, all this effort and iteration seems to be on the verge of paying off. We’re happy to report that our initial trial of about a dozen desktop units went as well as we could have hoped. Based on feedback from early customers, we’ve made a couple of subtle tweaks in the design and pack-out procedures.

After shipping the trial desktop units, we waited about two weeks for user feedback — at which point we took a deep breath, and punched the button on "mass" production (for values of "mass" approaching a few hundred units). We couldn’t afford to wait any longer, as we were rapidly closing in on the Chinese New Year holiday; our China facilities will be dark, cold, and silent by February 10th.

So, as humble as it may be, behold the Novena case production line: 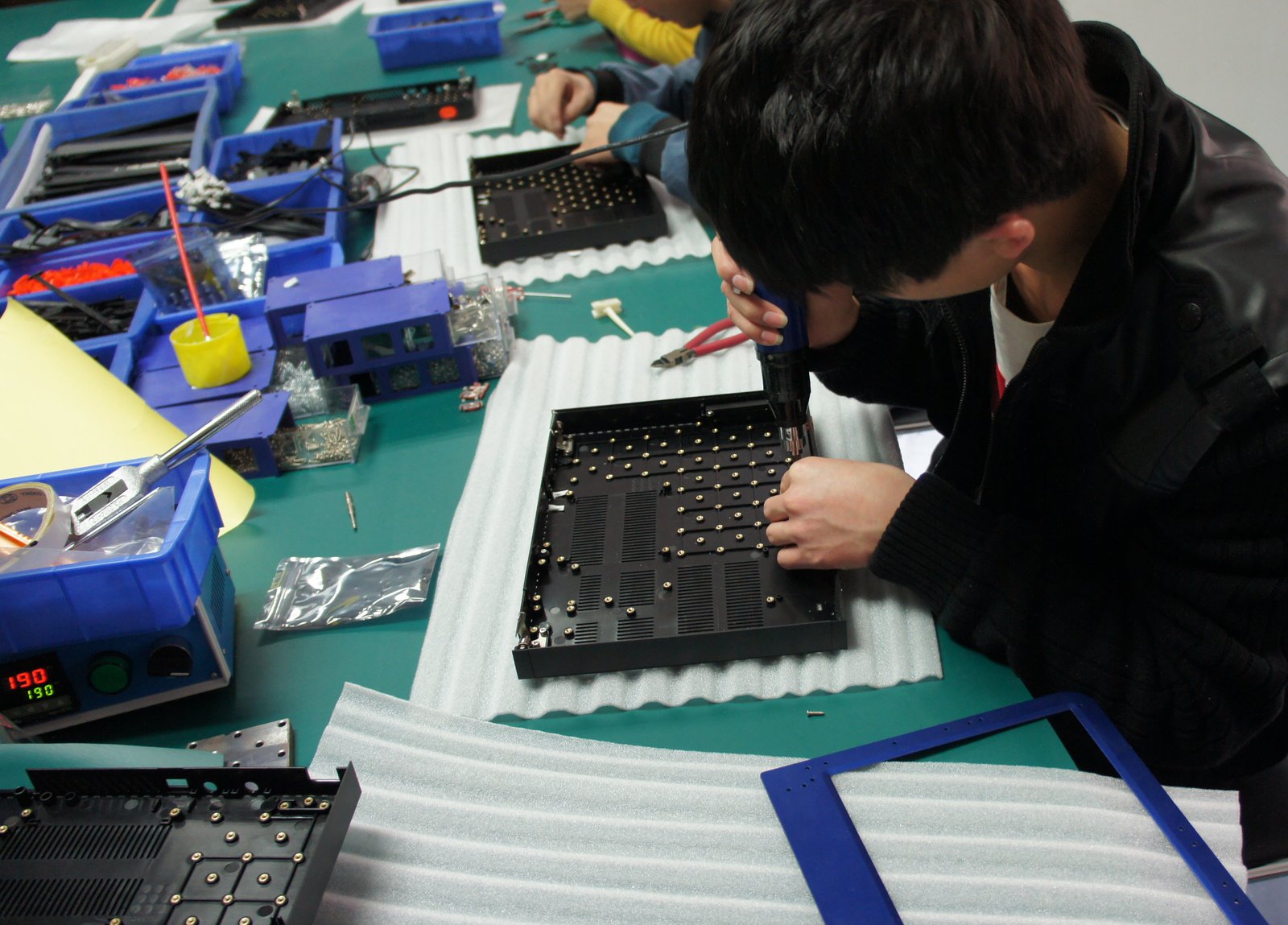 The Peek array uses largely thermoset nuts; only the most critical nuts are directly inserted at the point of injection molding, due to cost reasons. In order to achieve a consistent insertion quality, we use a steel jig to align the nuts to the array, and a temperature-controlled press to insert the nuts. 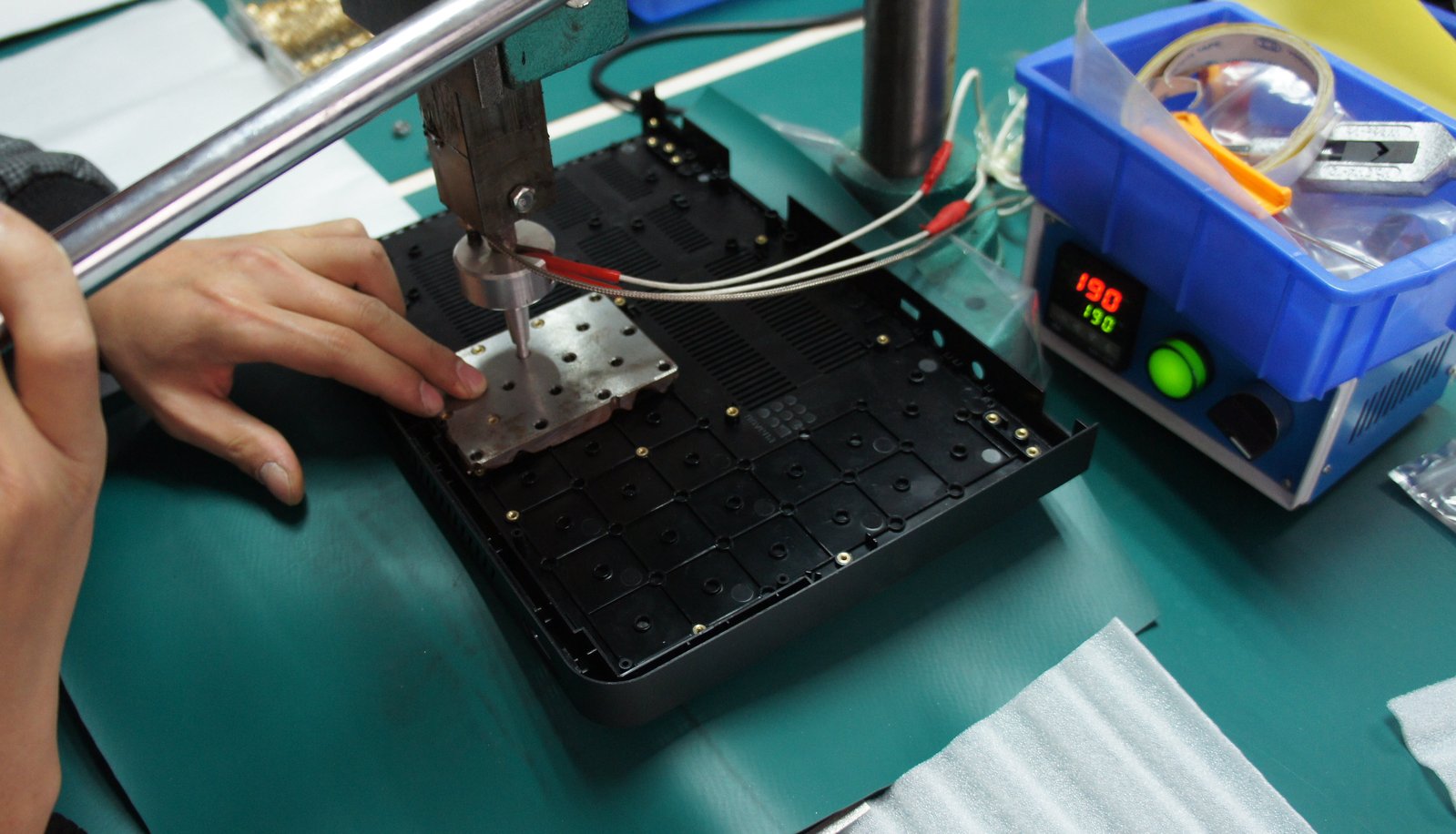 Putting nuts into the Peek array

We also thought it would also be interesting to show a mold juxtaposed with its respective plastic part. Below are the buttons on the front panel of the Novena case, ready for assembly:

These buttons are still on the "runner", which you can see more clearly in the steel tooling used to mold the buttons:

The buttons are molded four at a time, with a runner of plastic connecting them all to a common sprue used to force the molten plastic into the cavity. The sprue is cut off, leaving just a pair of buttons on a partial runner. This pair is then mounted into a jig, where the buttons are first painted a silvery white, and then orange. The silvery white coating is required to reflect more of the light and improve the contrast of the backlit lighting effect. The painted buttons are then mounted in another jig, and the icons are laser-etched out of the painted surface of the buttons. There’s a lot of work that goes into the manufacture of even the simplest, smallest parts.

With production in full swing, the cases are slated to be delivered for integration with the finished mainboards in our US facility during the 2nd week of February. Barring any customs issues, we hope to be shipping all the remaining desktop backer units to Crowd Supply by the end of February or the beginning of March.

We’re also going to be shipping our first /laptop/ backer units to Crowd Supply next week. Again, we’re starting with just a few units. Since the case and shipping method have already been trialled, we won’t wait as long for recipients to report their feedback. Rather, this exercise is meant to confirm that air courier services will accept the UN38.3 shipping certificates for our custom lithium-ion batteries. Once all the desktop units are completed with production, we’ll immediately ramp on laptop production, hopefully in early to mid-March.

Last but not least, we haven’t forgotten about the Heirloom backers. bunnie will be traveling to Portland at the end of March, where he’ll work side by side with Kurt Mottweiler to finalize and integrate the Heirloom units.

It’s been a long, hard road, and we thank all the backers for their continued patience. Production is steadily moving forward, albeit a little slower than we had hoped.