If you’ve moved, now is the time to update your address through your account, or contact Crowd Supply support.

The factory has finished production, and we’re now working through the details of getting the units from the factory to your doorstep. This is where Crowd Supply earns their keep, and it hasn’t been an easy lift for them. That being said, it looks like we’ve cleared some of the final hurdles to get the first batch of units to their distribution center, so hopefully backers will be receiving units “soon”, where the value of soon depends on how much congestion we have in the “last-mile” shipping and logistics channels.

Once the inventory arrives at Crowd Supply’s distribution center, shipping to backers will begin shortly after. If a backer needs to update their shipping address, they can do so through their account, or contact Crowd Supply Support..

Backers will receive an email with a tracking number when their order ships. Order status is also always available to view within one’s Crowd Supply account.

With production wrapped up, we’ve been able to turn our focus toward improving the operating system itself.

The first thing you should do is update your firmware with a “factory reset” script once you receive your device.

Substantial, security API-breaking changes have been introduced since the snapshot that was given to the factory back in October. When I say “API-breaking”, I mean that core routines that deal with encryption keys had bug fixes that will invalidate any existing root keys (you put the keys in there, not the factory, so this is why it’s important to do the update before you key your device).

With units arriving at backer’s doorsteps soon, we will be much more cautious before introducing any new API-breaking changes. However, to set expectations, we are still pre-1.0 and I expect that with greater community review, we will find bugs that are both important to fix and will have no way to fix them other than with an API-breaking change.

While we are pleased that Xous has reached an “MVP” level, it is still just a kernel. If you were to compare it to Linux, it’s like a compact Linux embedded installation with a single Busybox process that has about 1/20th of the commands implemented.

However, Xous is not Linux, nor does it aim to be (after all, Linux already exists, and anyone is welcome to port it to Precursor!). Xous is closer to a BIOS in terms of functionality and role: it is a framework meant to prop up tightly integrated single-point applications, providing a layer of essential system services and abstractions that are primarily accessed via code API calls and not a command line environment.

Because Xous doesn’t really fit into any pre-defined category, I suspect we’ll be hammering on this point quite a bit as developers get their hands on it. The more code we roll into Xous, the bigger the attack surface; it will be a delicate balance between “all the features” and “all the security”.

Xous 0.9.6 is one of the few releases we do where you will see substantial cosmetic differences in the UX. Here is what Xous used to look like:

And here is the latest version: 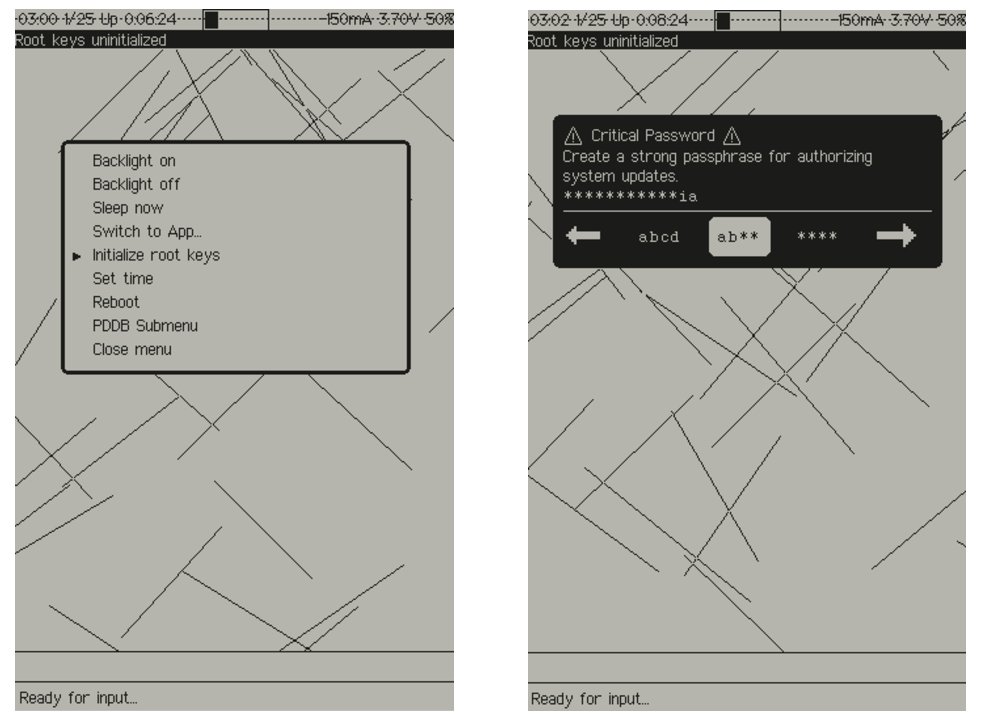 Aside from the obvious change of smaller font options, here’s a list of things that have been introduced since Xous 0.9.5:

The introduction of modular applications is probably of most consequence to new users, because it gives a framework for managing which applications are in your Xous build. It will also allow us to integrate new contributions to the Xous ecosystem without growing the disk image for all users – individual users can choose, a la carte, which applications they want inside their disk image by specifying it in the build command line. Read more about how this works at our wiki!