All mechanical parts are ready, waiting for certification

TL;DR: All of the keyboard molds are finalized, and the plastic parts for the pilot run are ready. The PCBs of the pilot run are also ready, and waiting to be assembled. We’re waiting for TÜV to certify our design, and then the PCBs will get assembled. The printing factory is nearly ready with the UHK and palm rest boxes. We need about one and half month to start delivering batch 1. Please see the end of this update starting from the “The state of the pilot run” section to see why.

We’ve been tweaking the molds for seemingly forever. This process is usually extremely time-consuming and involves numerous iterations, especially for high quality plastic parts like the cases of the UHK. Thankfully, we’ve arrived at the end of this journey by manufacturing the top case parts, which were the only missing parts. 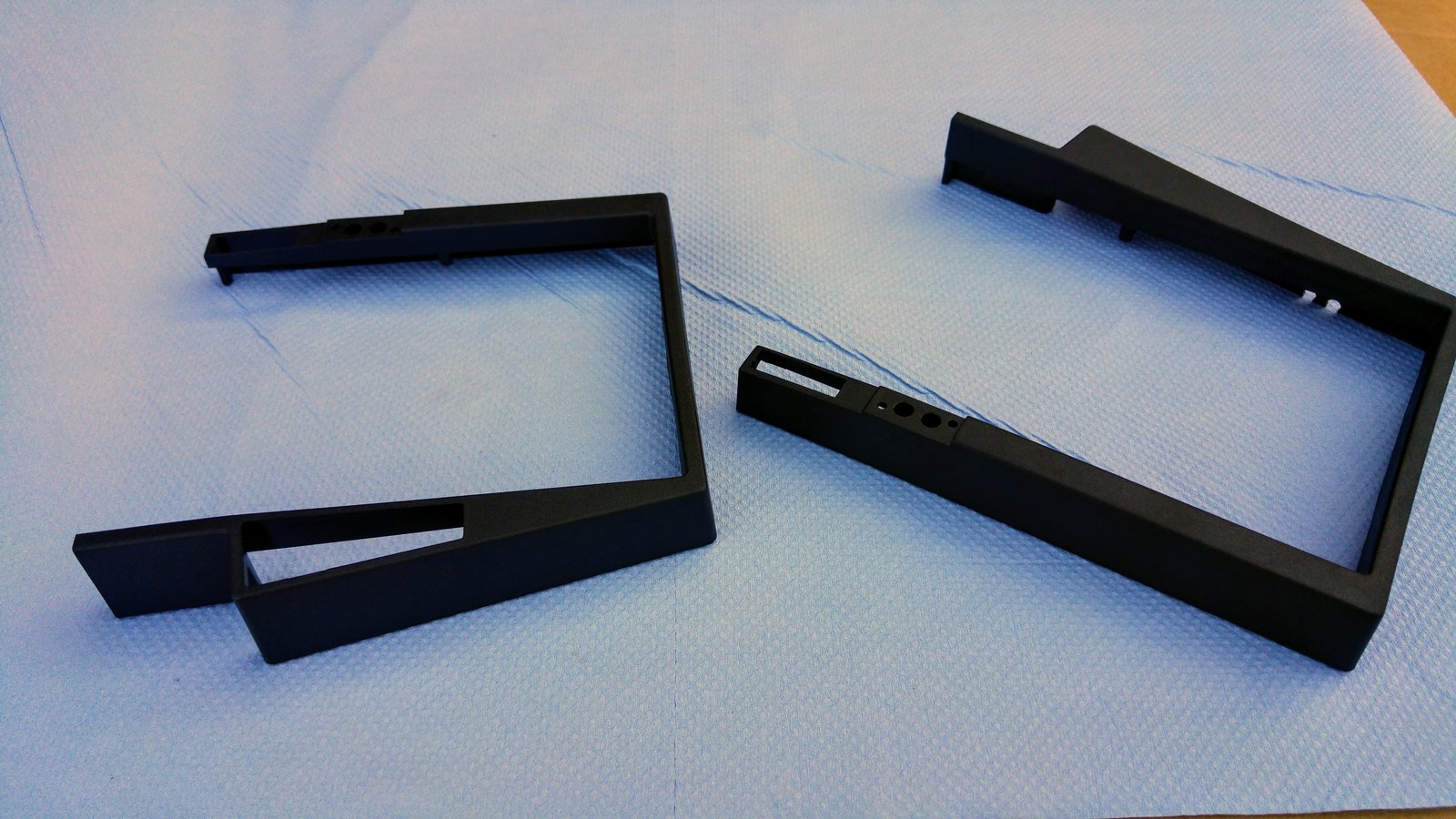 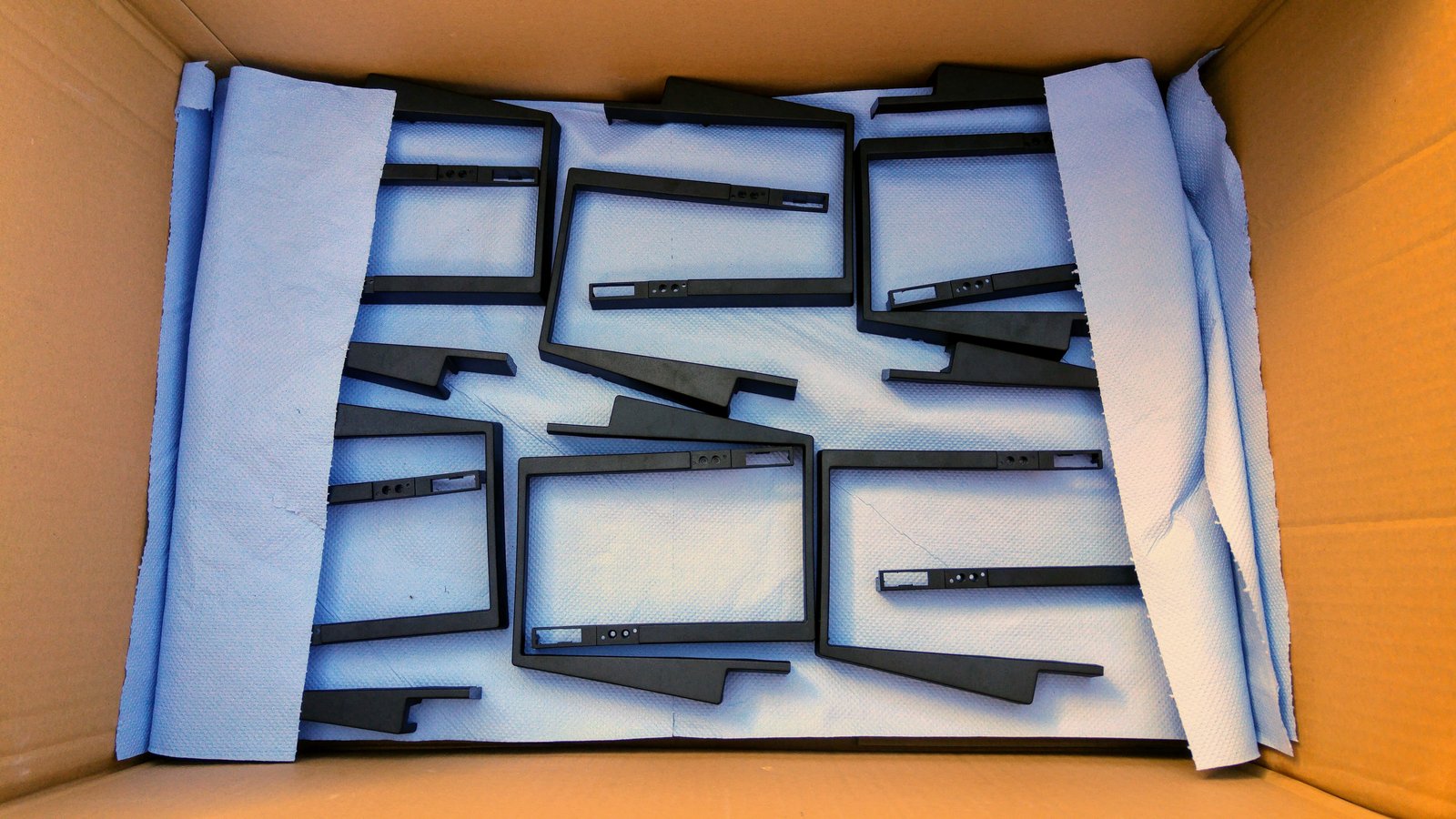 Of all the mechanical parts, only the baseplates of the palm rest are left undone. We weren’t completely satisfied with the coating of the latest samples we got, so we asked for new ones featuring three different kinds of powder coating. 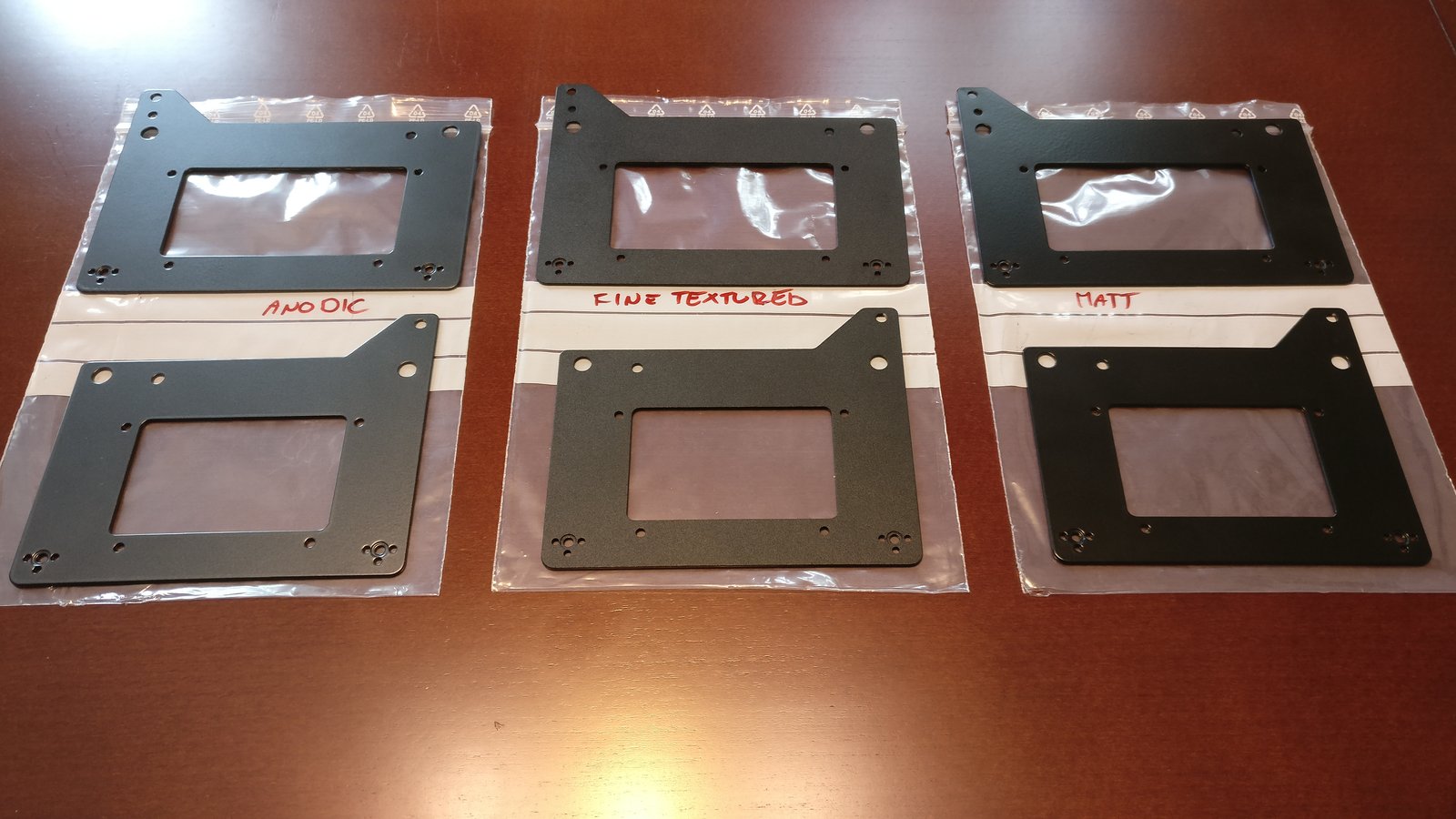 We agreed that the middle, fine textured sample is the one to go with, as it most closely resembles the texture of the UHK case. The base plates of the pilot run are being laser-cut and they’ll be powder coated in a couple of days.

The 50 PCBs of the pilot run are ready, and waiting to be assembled. 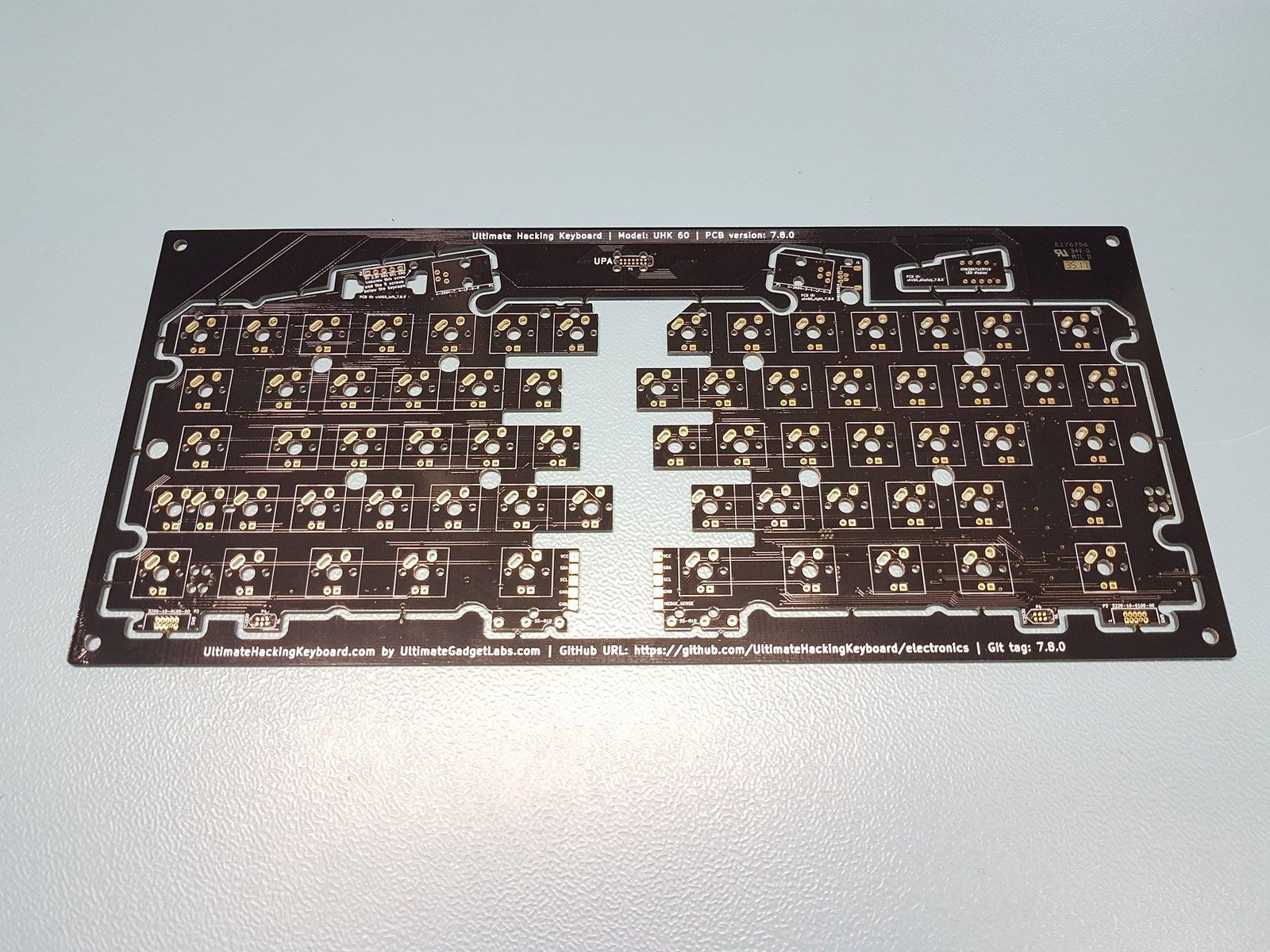 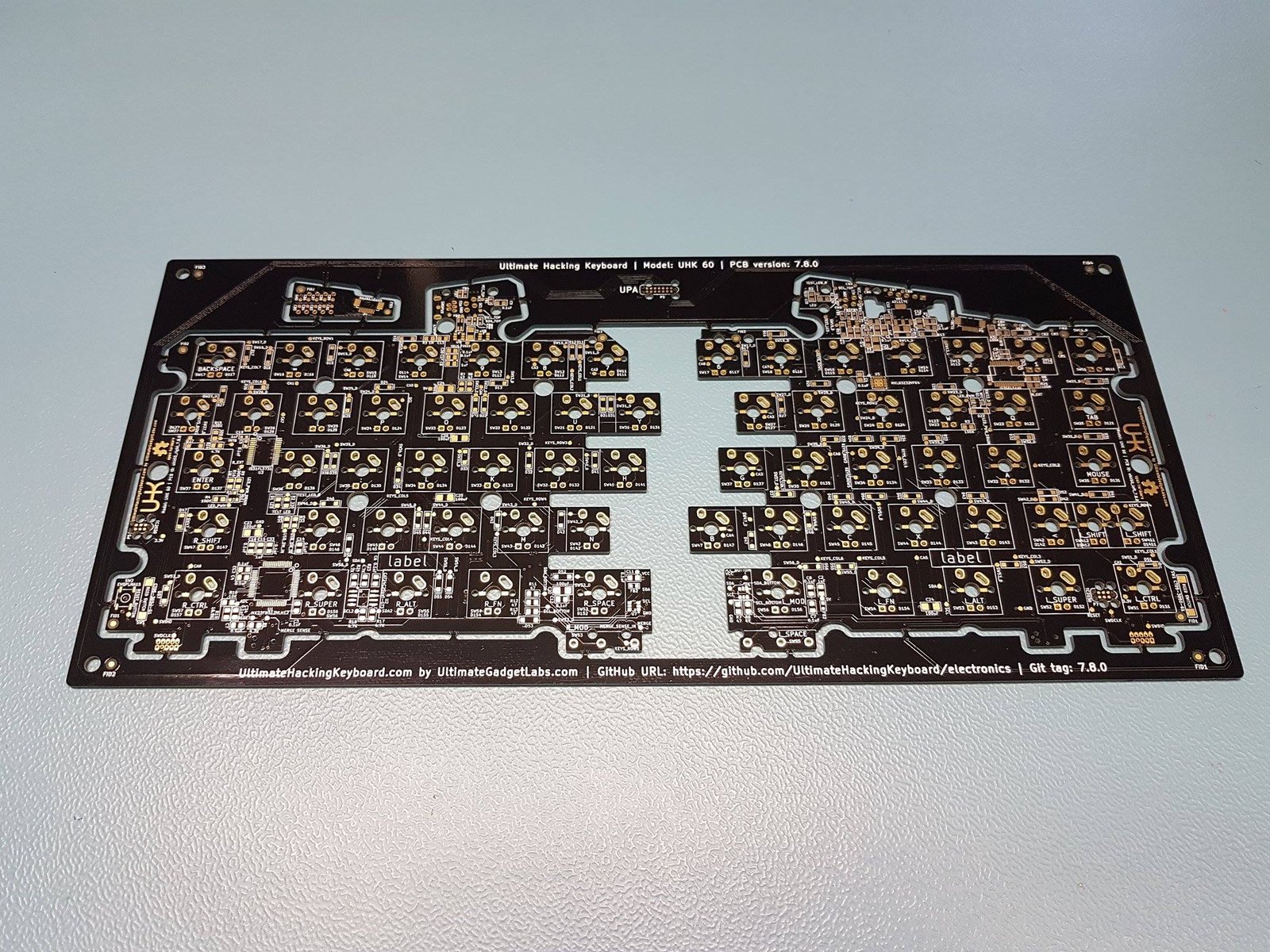 Board assembly will start as soon as we receive the FCC and CE certifications from TÜV. Actually, the UHK may already be certified, we just haven’t heard of it because our contact person at TÜV recently quit. Now his boss is our new contact who is very busy, but nevertheless, he promised to get in touch with TÜV Netherlands and sort things out by the end of the week.

We’ve been in the printing factory lately, watching as the sheets of the UHK packaging as they get printed. I didn’t expect anything fancy and boy, was I wrong! The Heilderberg Printmaster printing press which was used to print the UHK packaging is a monumental machine and it was quite a sight. 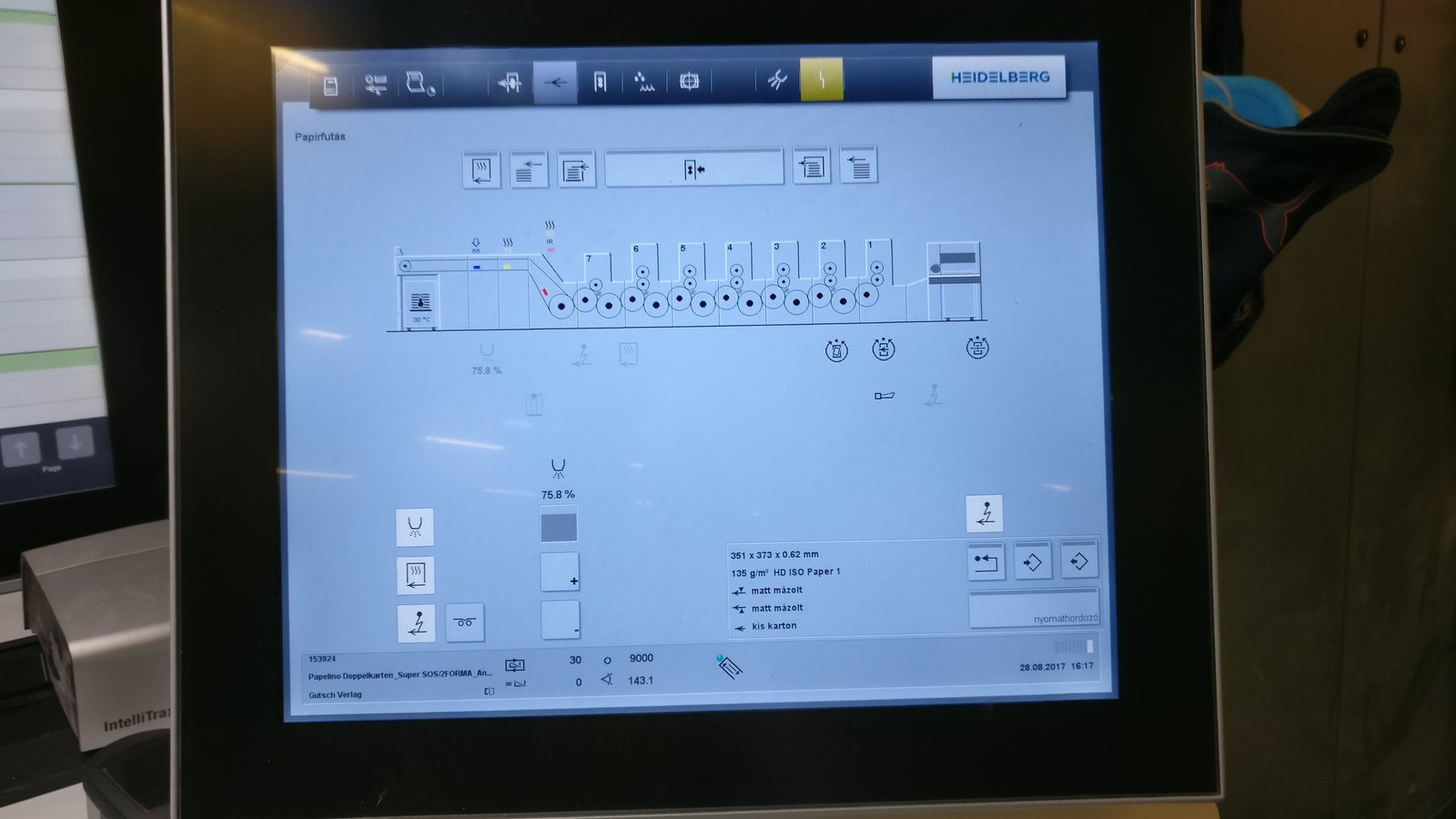 The inside of the beast shown on its control panel

Packaging is not the meat of the product, but we do believe that it creates an impact, and we don’t like to leave any stone unturned, so we’ve put quite an effort into designing it. Hopefully it’ll show when you unbox your UHK and palm rest.

The state of the pilot run

Once the above issues are resolved, assembling the pilot run UHKs will happen in a matter of days, and production speed will ramp up rapidly as we gain more experience regarding the assembly process.

The remaining 1,950 UHKs of batch 1 will follow quickly after receiving some feedback from pilot run recipients.

Given that the pilot run has yet to be sent out, then we have to gather some feedback from the pilot run recipients, and then assemble the next batch of PCBs, we have to push the current delivery date by one and half months, at which point the delivery of the remaining items of batch 1 should start. This brings me to the following point…

Some words about delays

Some of you are growing impatient due to the number of delays that have been introduced over the lifetime of the project. This is understandable, and we couldn’t be more eager to ship sooner. I’d like to elaborate a bit on why it’s taking so long to deliver.

You could see several bullet points in the above section, each involving at least one supplier of ours. We have dozens of such suppliers all around the world (mostly in Hungary, and some in Serbia, China, and Taiwan), and each of them was chosen from numerous suppliers.

For example, I contacted about 30 suppliers for the LED display alone, then chose one, and then exchanged about 200-300 emails with them, got a couple of samples, dealt with customs quite a bit, and all this resulted in the current LED display. And this is a single supplier!

András and I are running this show, two guys from Hungary. I work more than 300 hours a month solely on the UHK, and András is doing his fair share too. The only reason we don’t work more is because we can’t without flat-out burning out. We could add more workforce and experts to the project, resulting in faster progress, but they’d cost a lot of money and we have no room financially as custom tooling and starting and maintaining a supply chain and manufacturing capability is awfully expensive.

Speaking of finances, we’re extremely conservative. Full disclosure: I earn \$2 per hour, and András earns \$0 while working on the UHK mostly and in his own company part time. The vast majority of the money we spend is on manufacturing and R&D. We realize it’s your money and trust that you gave us to make this project a reality and we’re doing everything within our power to make this a success.

We could simply go to an OEM in China or Taiwan and use their resources to fix many of the issues we’ve encountered, but we’ve made a conscious decision to manufacture the UHK in our home country. The reason being that this way we can directly oversee manufacturing and QA without camping all the time in Shenzhen, and we can be more nimble in the long run, after going through the initial formidable hurdles of starting up all this.

I should also add that the UHK is not exactly an average keyboard, and not just a split keyboard, but a split, modular keyboard that is extendable with add-ons, which is something that, according to my knowledge, nobody has ever done before. The overall complexity of the project is quite staggering from a mechanical, firmware, electronics, and software standpoint compared to an average keyboard. In a couple of aspects, it’s the most complex keyboard ever made.

It’s also worth mentioning that we’re unwilling to make quality compromises, which also adds to the delays. Among many things, this has made the molds especially time consuming to make and refine.

When we announce a delay, it’s not because we were intentionally keeping quiet about it previously. It’s rather because of some unforeseen issue, like a critical supplier underperforming, a design issue that we couldn’t foresee, a supply chain issue, or virtually anything else we couldn’t think of previously. Very often we have to deal with these as we encounter them, and we always try to do our best. The road will eventually smooth out, but only after hitting every bump imaginable.

So, this is the long and the short of the situation. We’re really pushing it hard guys, and want to make this the best keyboard humanly possible. Let’s get there together, even if it takes longer than anticipated!