Happy New Year, everybody! This is the most recent installment of UHKzine - your authentic, monthly news source on all things UHK. In this update, there’s good news (production is moving along nicely), bad news (we need to delay delivery by two months to April 2017 in order to fix electrical noise so the UHK can pass FCC and CE certification), and more good news (we’re already vetting some great candidates to fix our PCB design in order to reduce the electrical noise).

We visited our PCBA contract manufacturer to prepare for mass production. They wanted to assemble five boards, so that we can get a good grip on the process, create jigs, and optimize for manufacturing as much as possible.

First, we figured out how to solder the switches and plates to the board in the most productive manner. 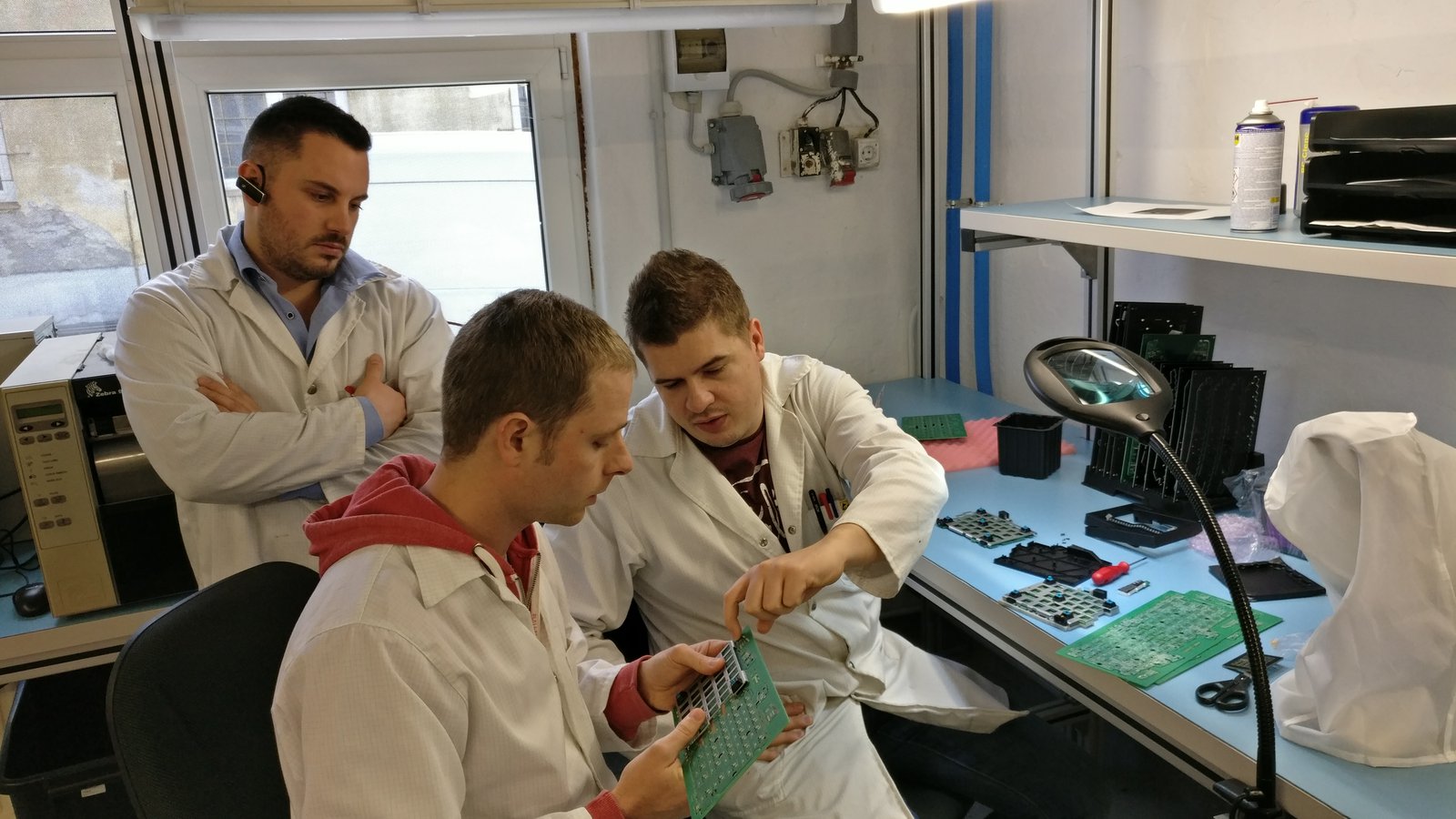 After discussing the surface mount part, we talked about through hole assembly. The panels will go into the following jig. 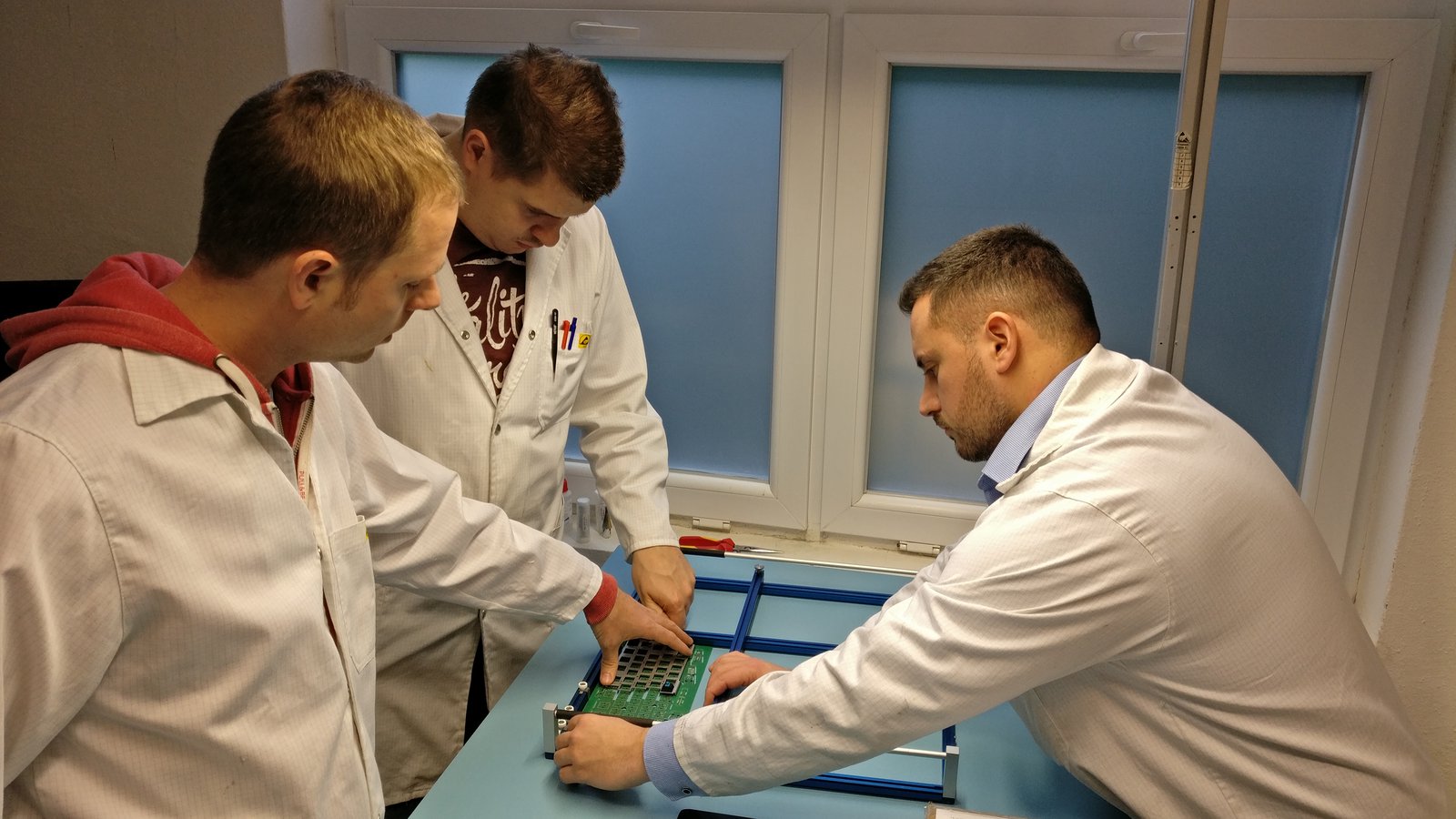 And the jig will go into the selective wave soldering machine, soldering the leads of through-hole components, mostly the keyswitches. 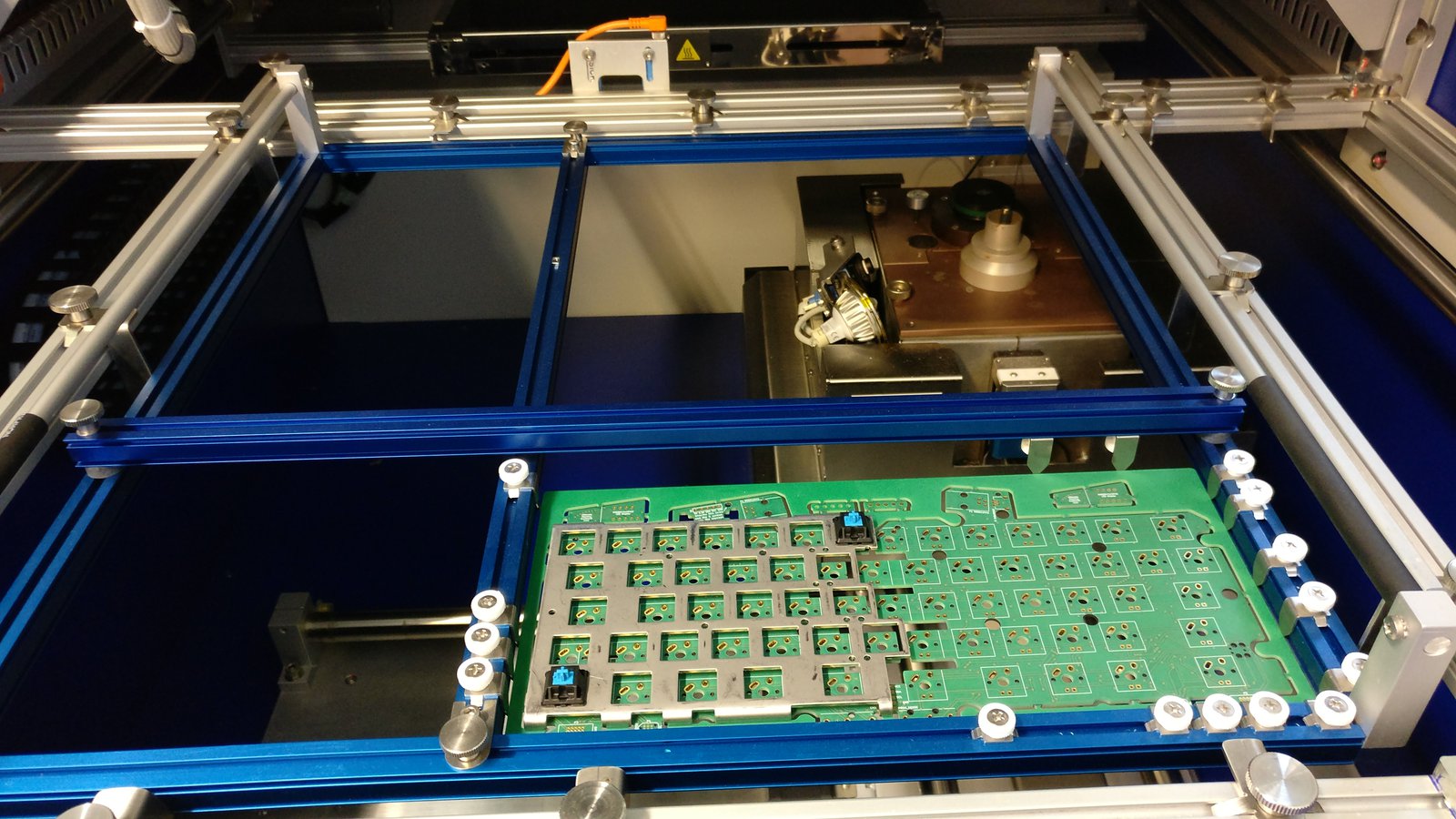 Some time after the meeting, they sent us a couple of pictures of the assembly process. 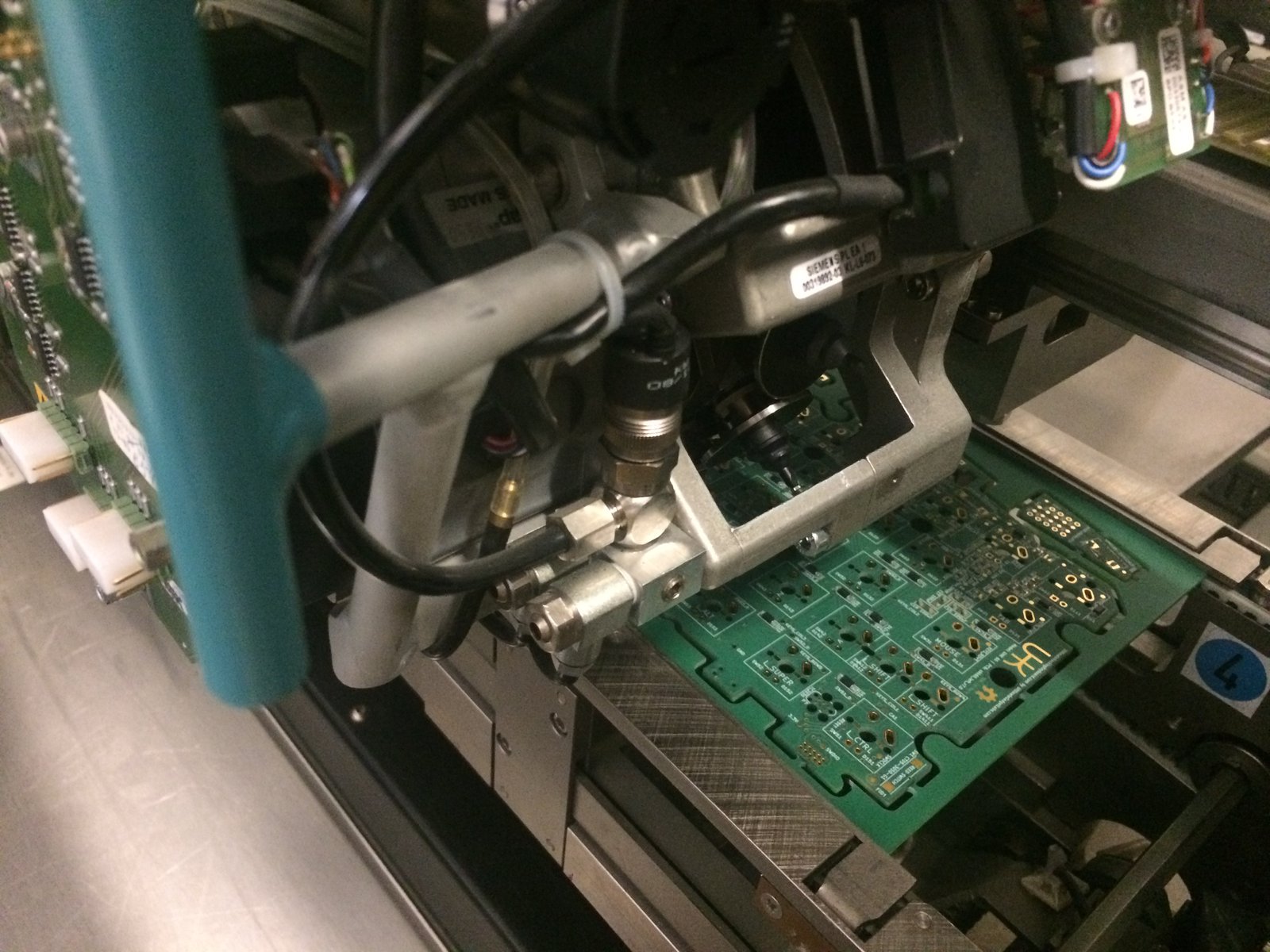 UHK panel in the pick and place machine 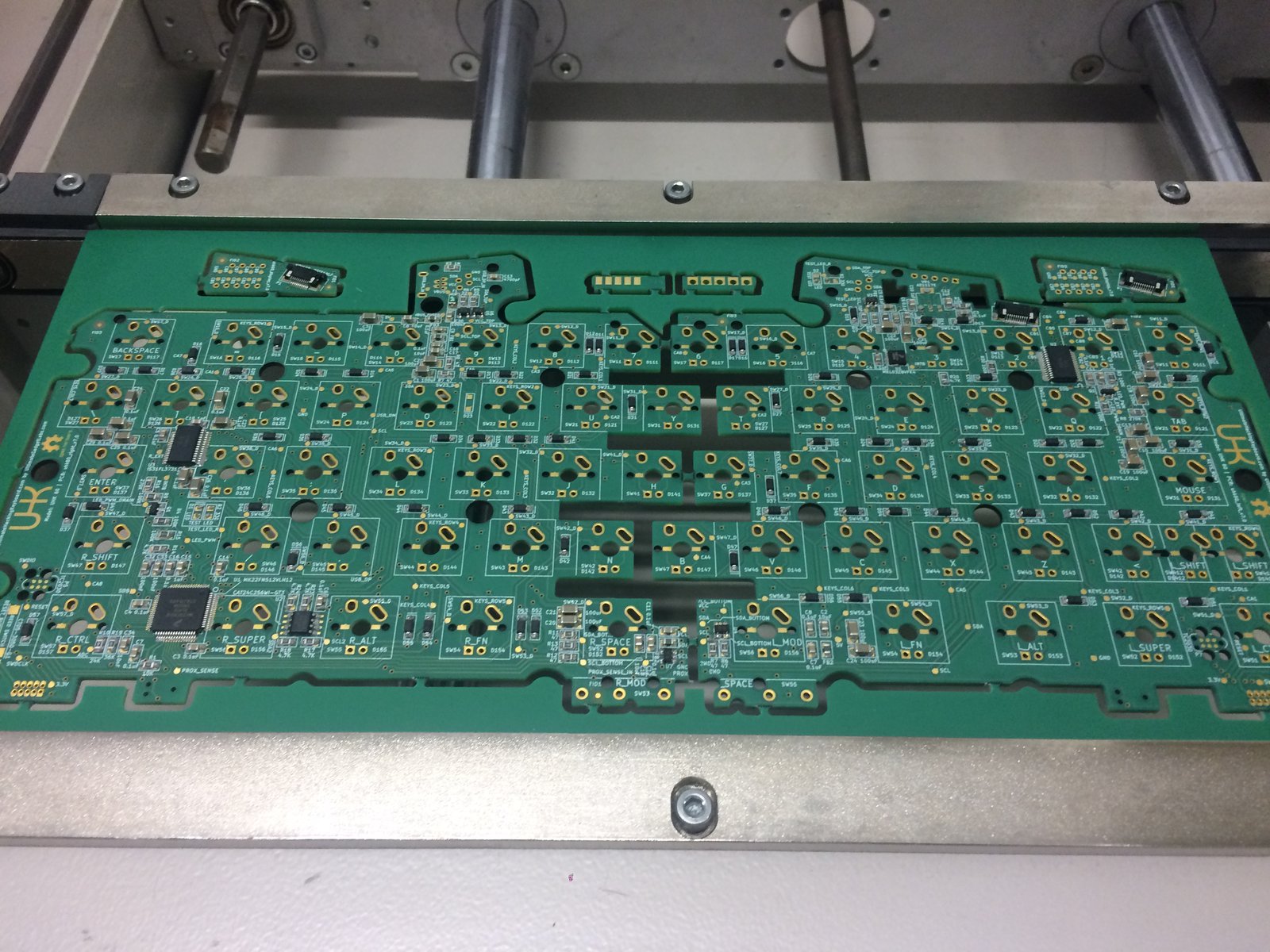 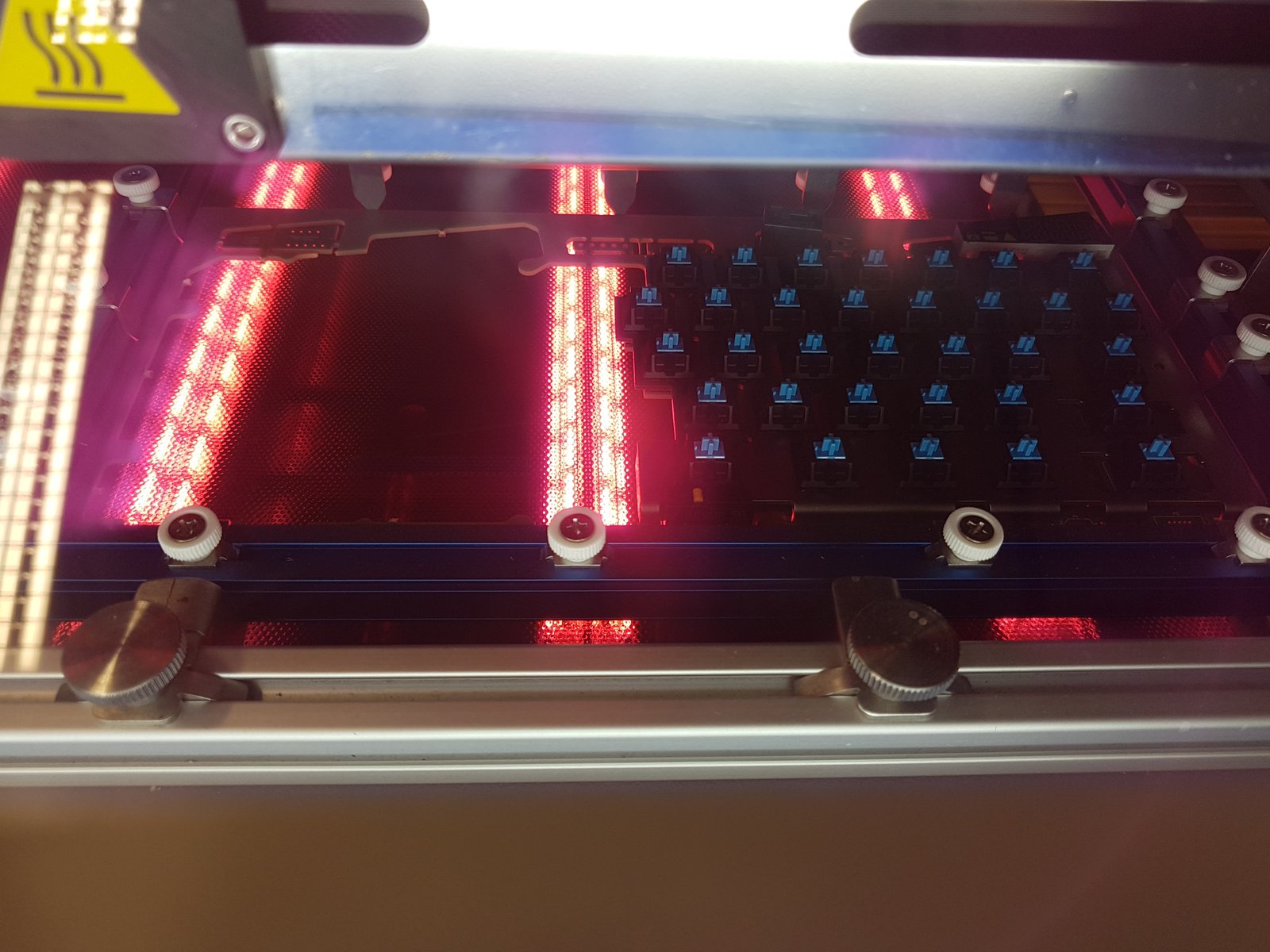 After finishing with the first sample batch, our contractor has followed up with some suggestions to further improve the PCB design for manufacturing. These were very minor improvements. Things are looking good in this department.

We’ve got a couple of new case and plate samples from our contractor. 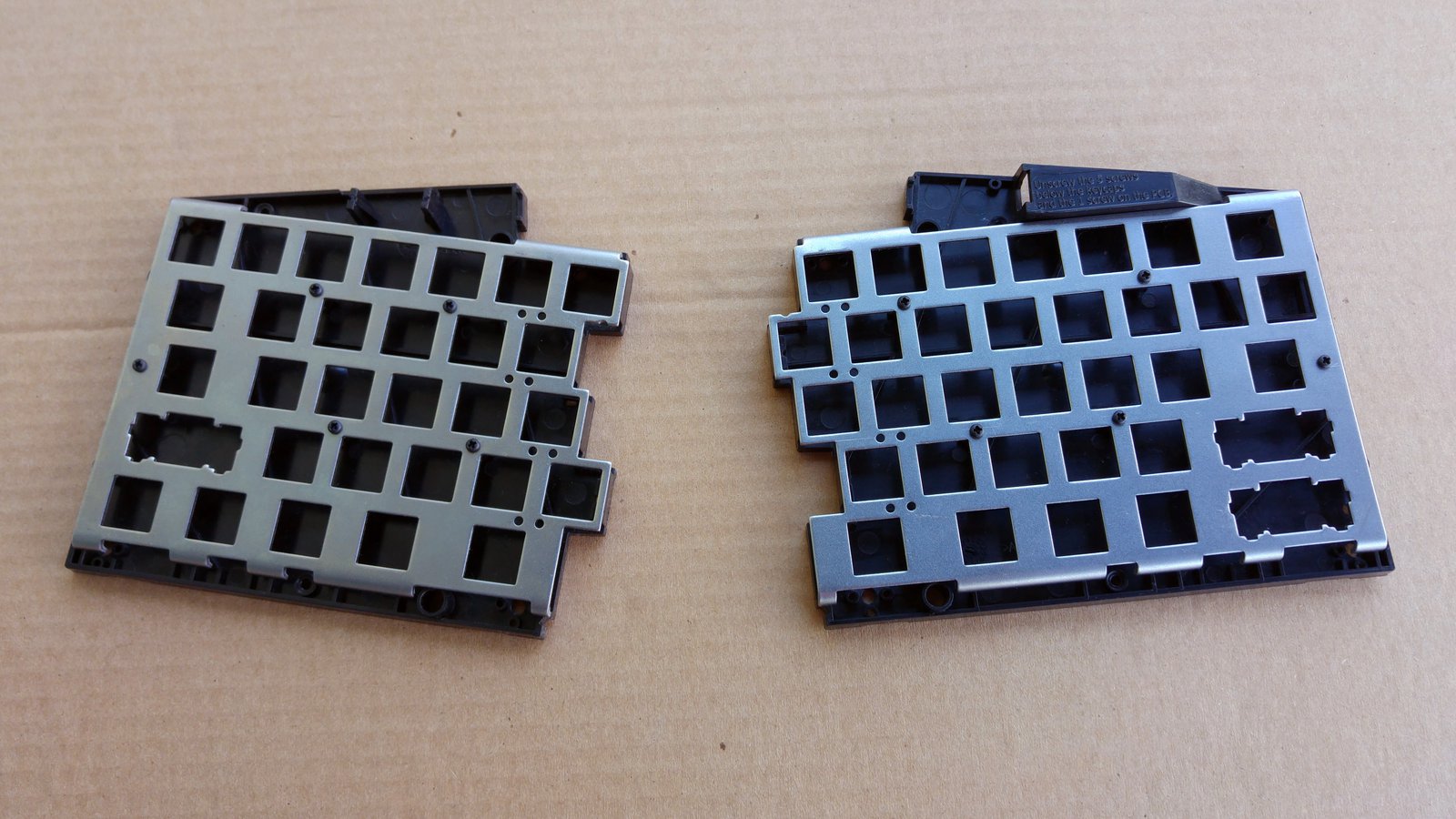 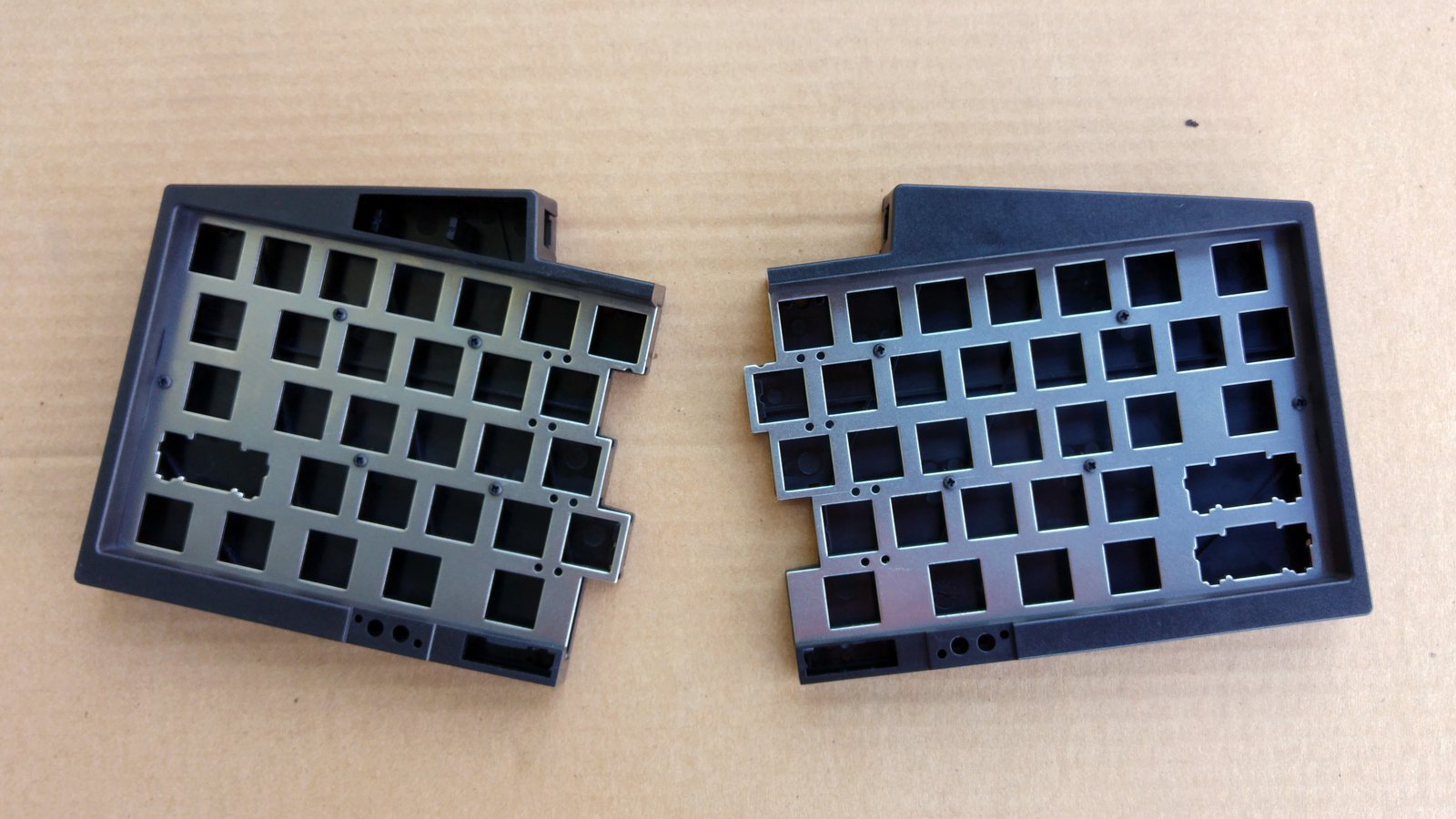 The new plates are extremely accurate and fully ready for production. The cases are close to perfect, but still have some sink marks. 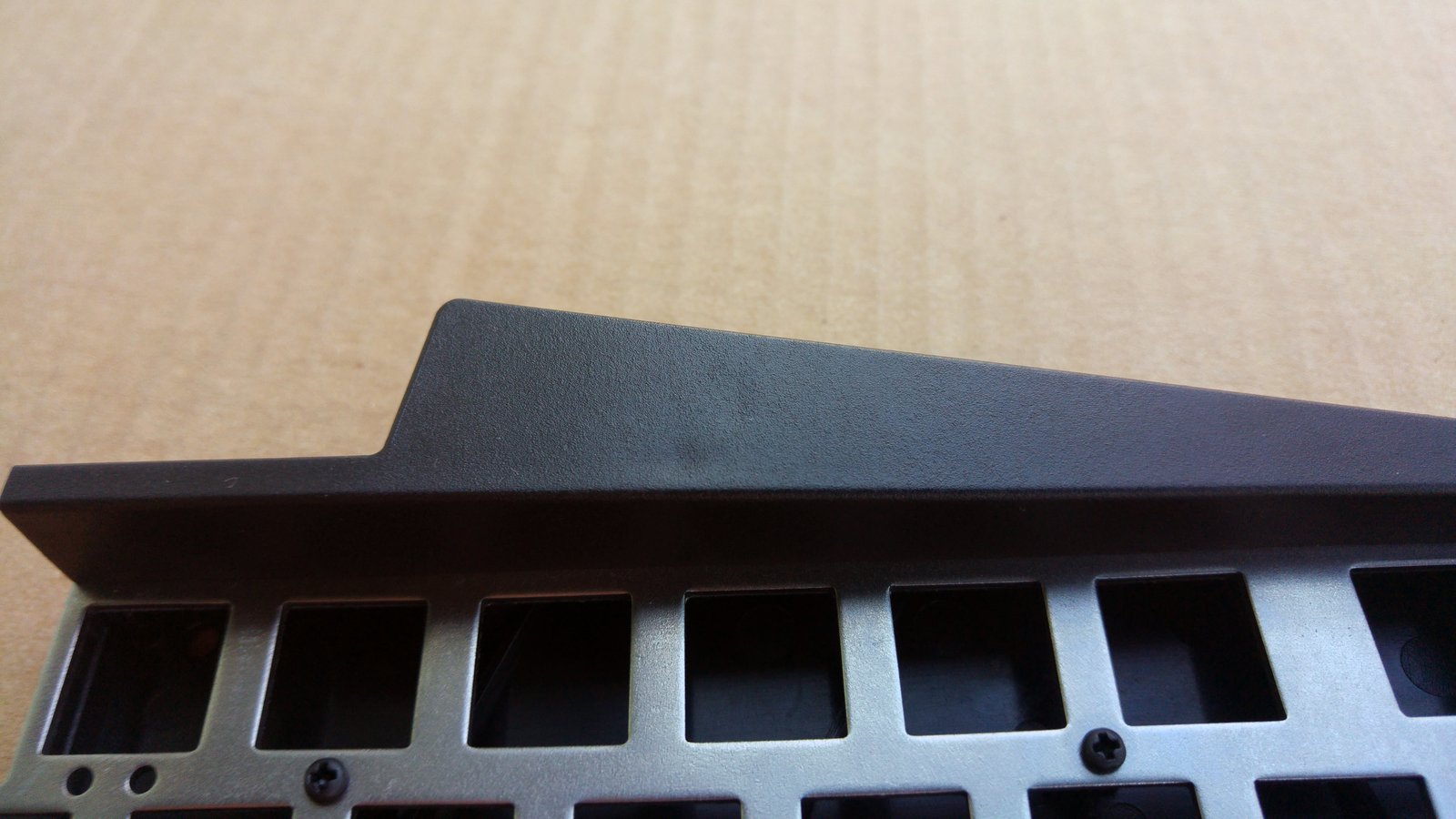 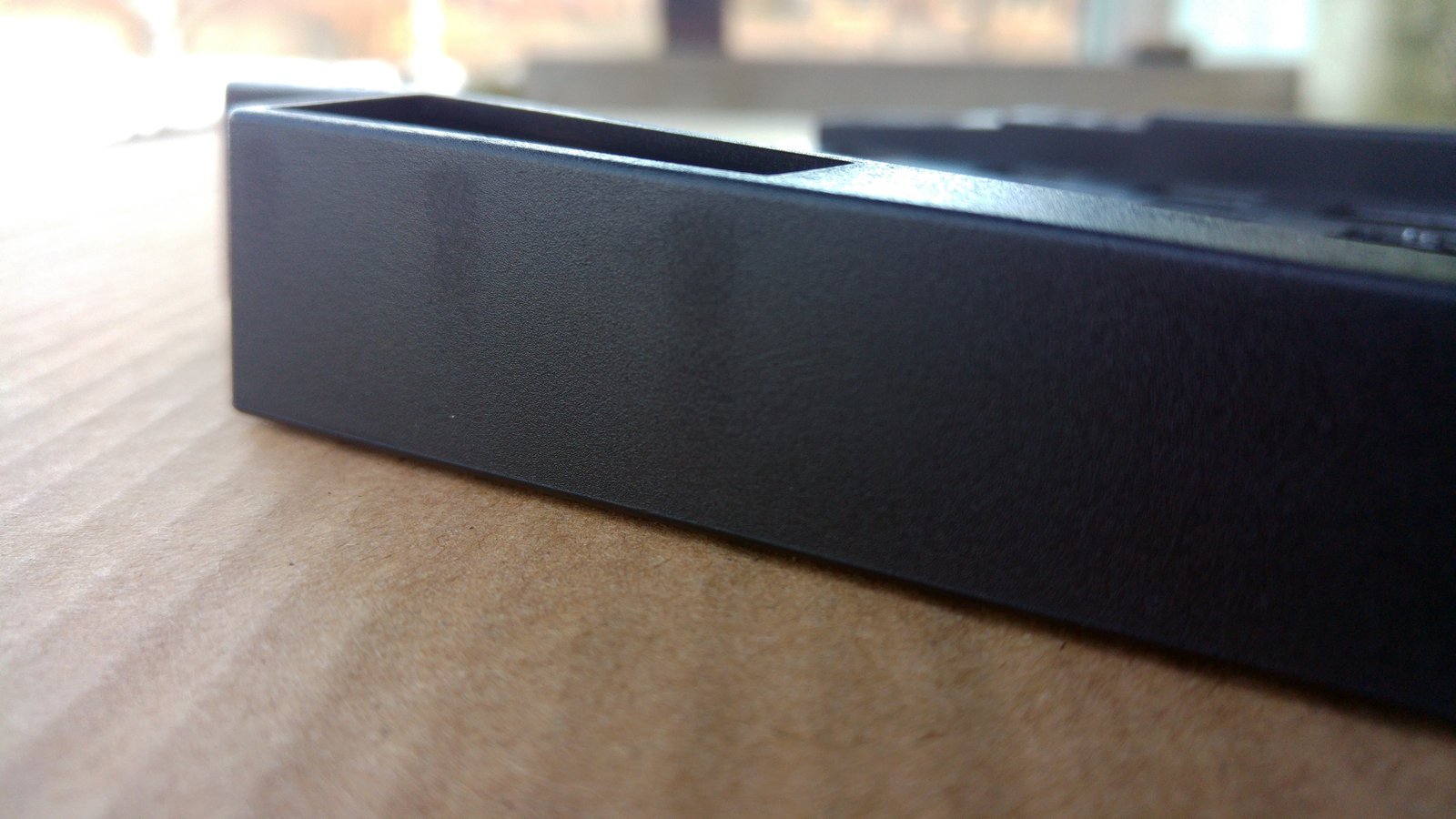 We’re about to use the mold with a more capable injection molding machine, which may make these sink marks disappear. If not, we’ll modify the mold further.

Parts Are Flowing In

We’re in the process of ordering every part from all around the world. Some recent ones: 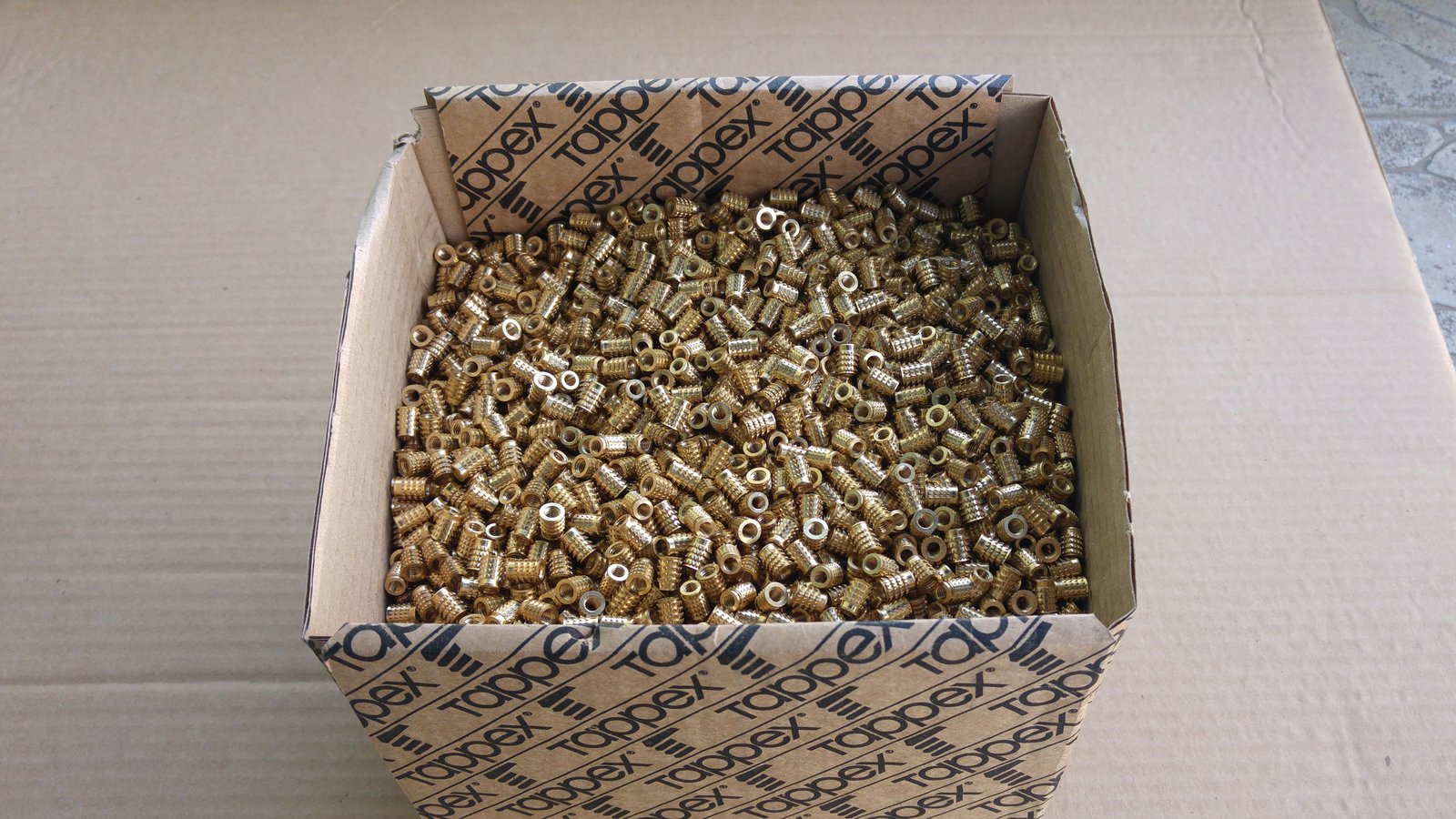 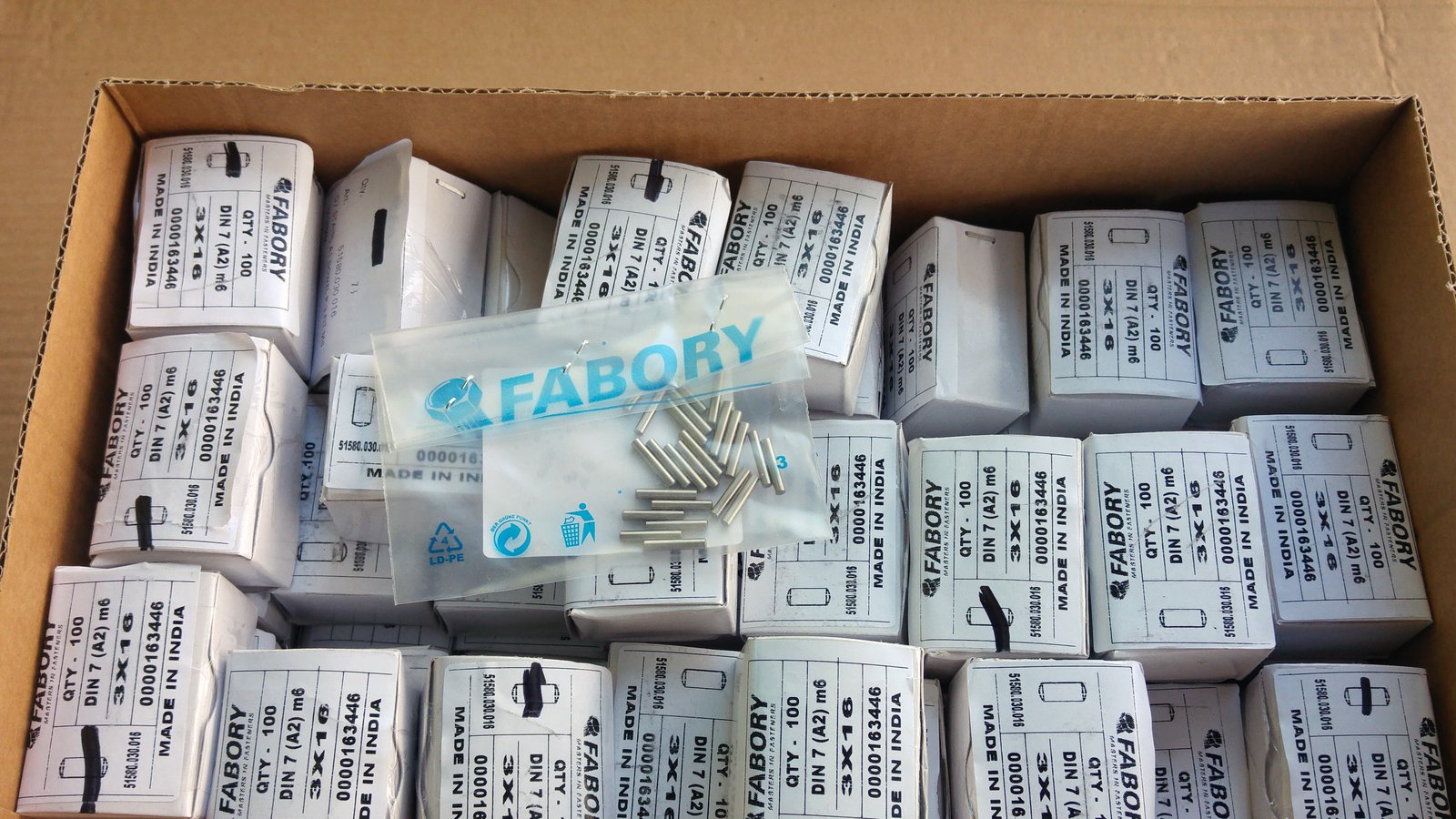 Dowel pins for the male guides 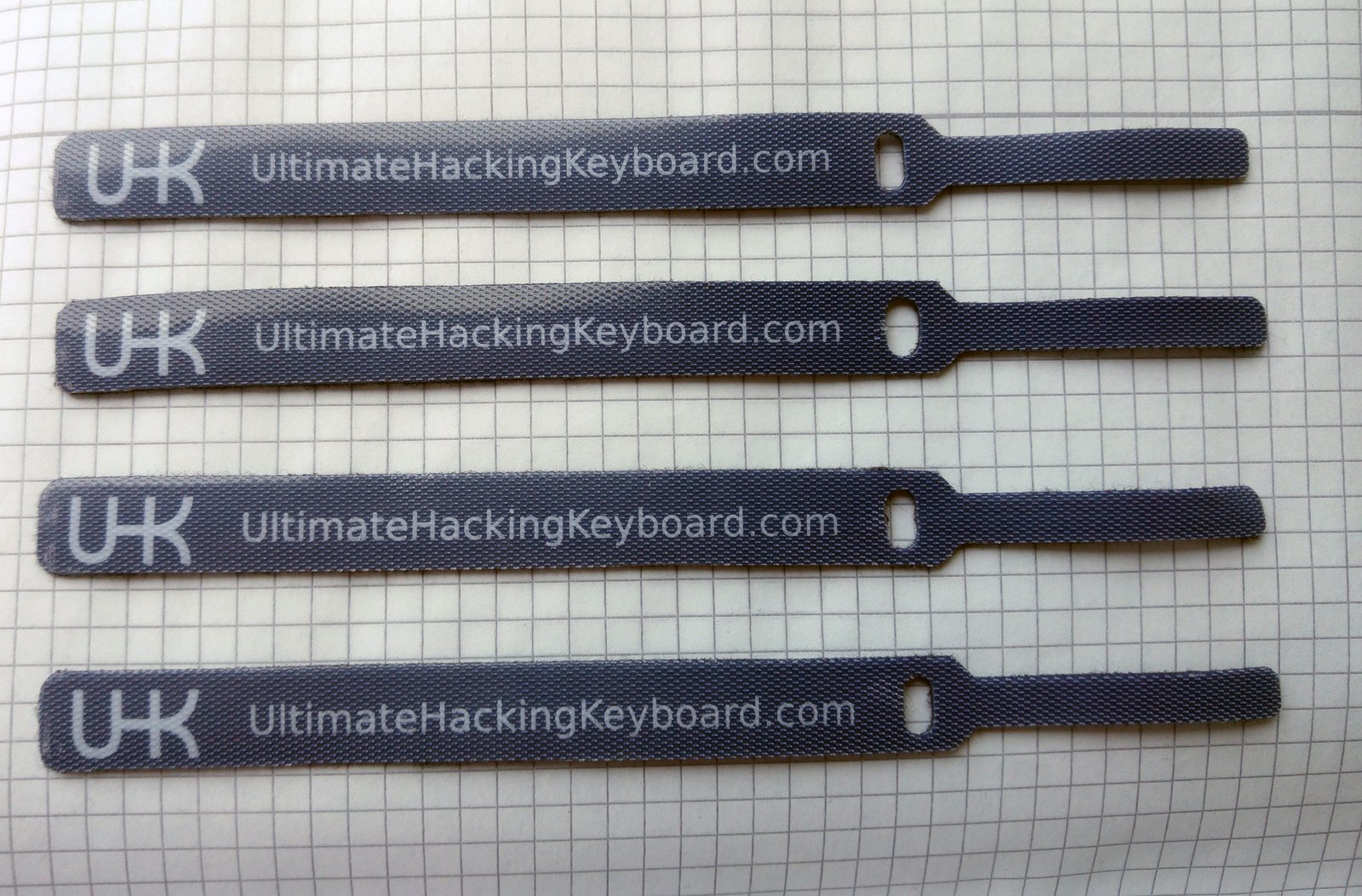 We’ll be keeping you posted on the new items as they arrive.

The splitting / merging of the keyboard halves is a central part of the UHK user experience. This experience is very much dependent on the force the magnets exert. Although we have an intuitive feeling regarding the optimal amount force, being engineers, we want to be able to measure it, and make sure that it’s consistent across the keyboard halves, and across a keyboard half and add-on module. This has justified having a force gauge. 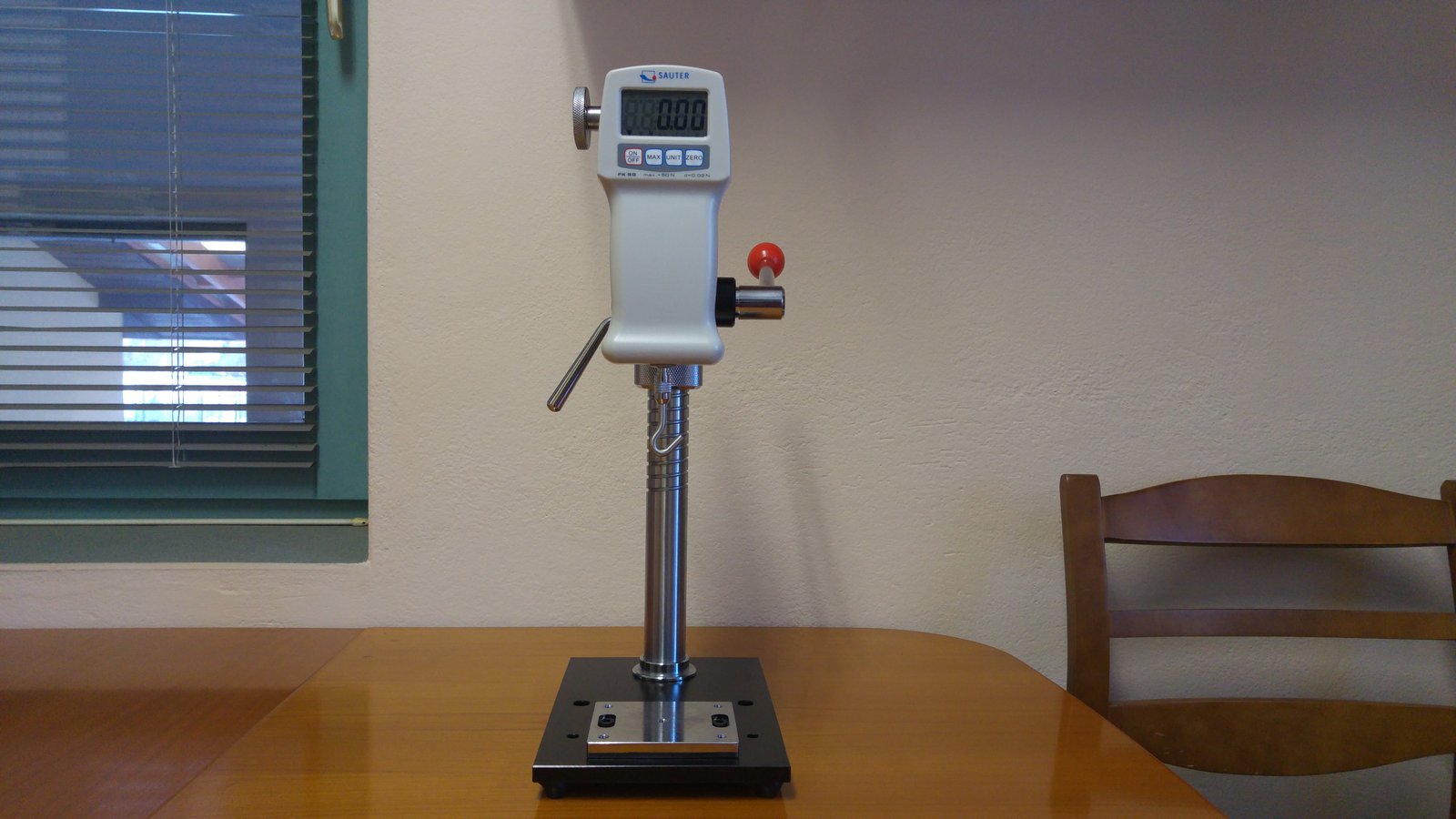 The measurements will give us a good idea about the strength of the magnets and how to choose the material of the magnets’ counterparts. We’re only a couple of days away from starting the production of the counterparts, and ordering the magnets.

EMC stands for electromagnetic compatibility, and such tests basically make sure that electronic devices do not interfere with each other. Because, believe it or not, people expect their phones to work when the microwave is on. You get the idea.

The UHK is no microwave, but in order to be allowed to be sold worldwide, we have to stick FCC and CE logos onto its back. And in order to be entitled to use these logos, the UHK must pass standard EMC tests.

This made us visit the EMC lab of T-Network to measure the electromagnetic emission of the latest UHK prototype. T-Network is a logical first step because their measurements are fairly affordable unlike the final measurements and certification at TÜV which is an order of magnitude more expensive. We better get this right because if not, we’ll have to pay big bucks to TÜV upon every subsequent try.

After walking into their building, making a few turns, and finding the right door of the long corridor, it wasn’t hard to notice that we arrived to the right place. 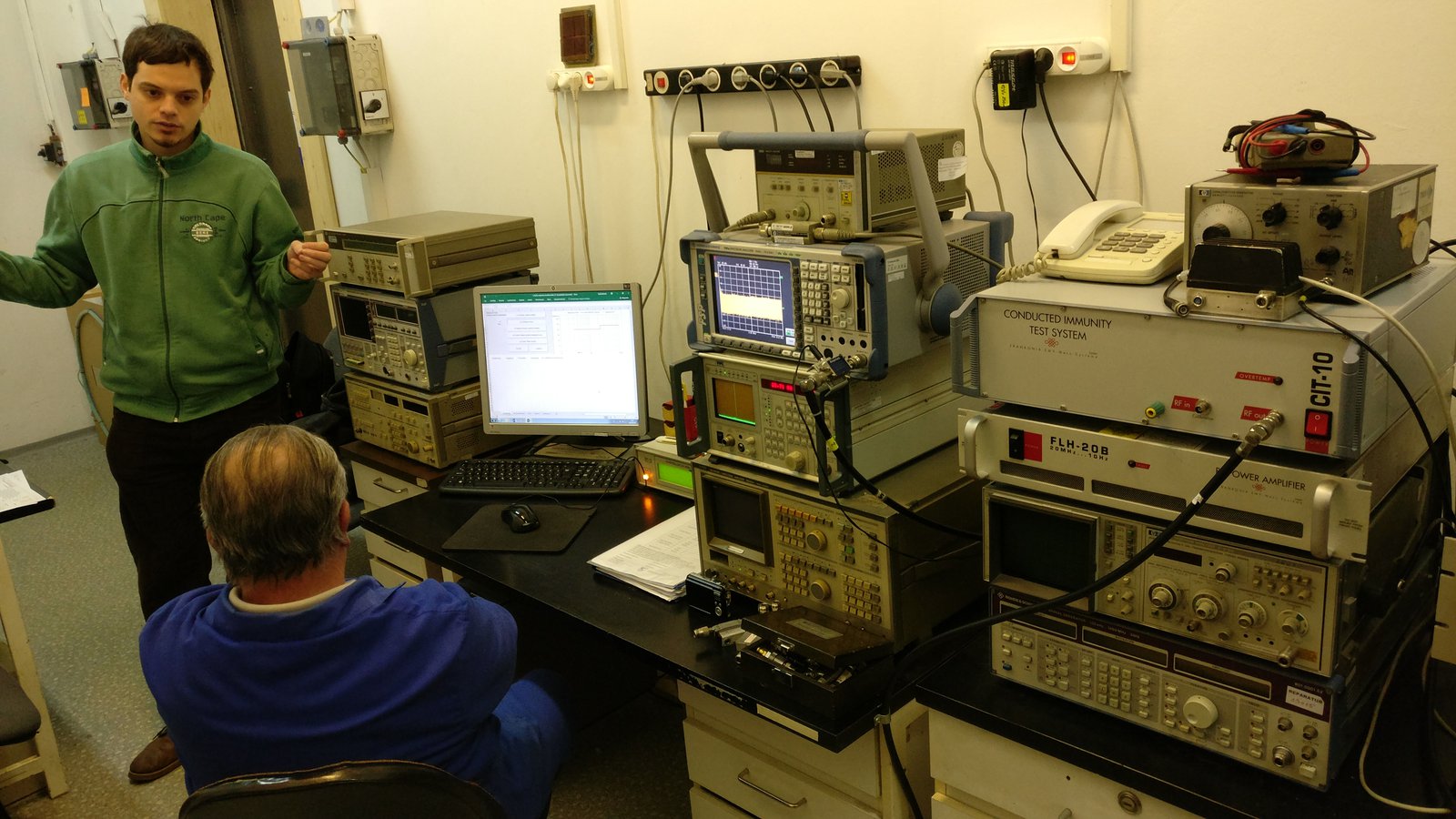 When opening the inner door of the lab, the SAR, or semianechoic room gets revealed. This is where the actual measurements take place. 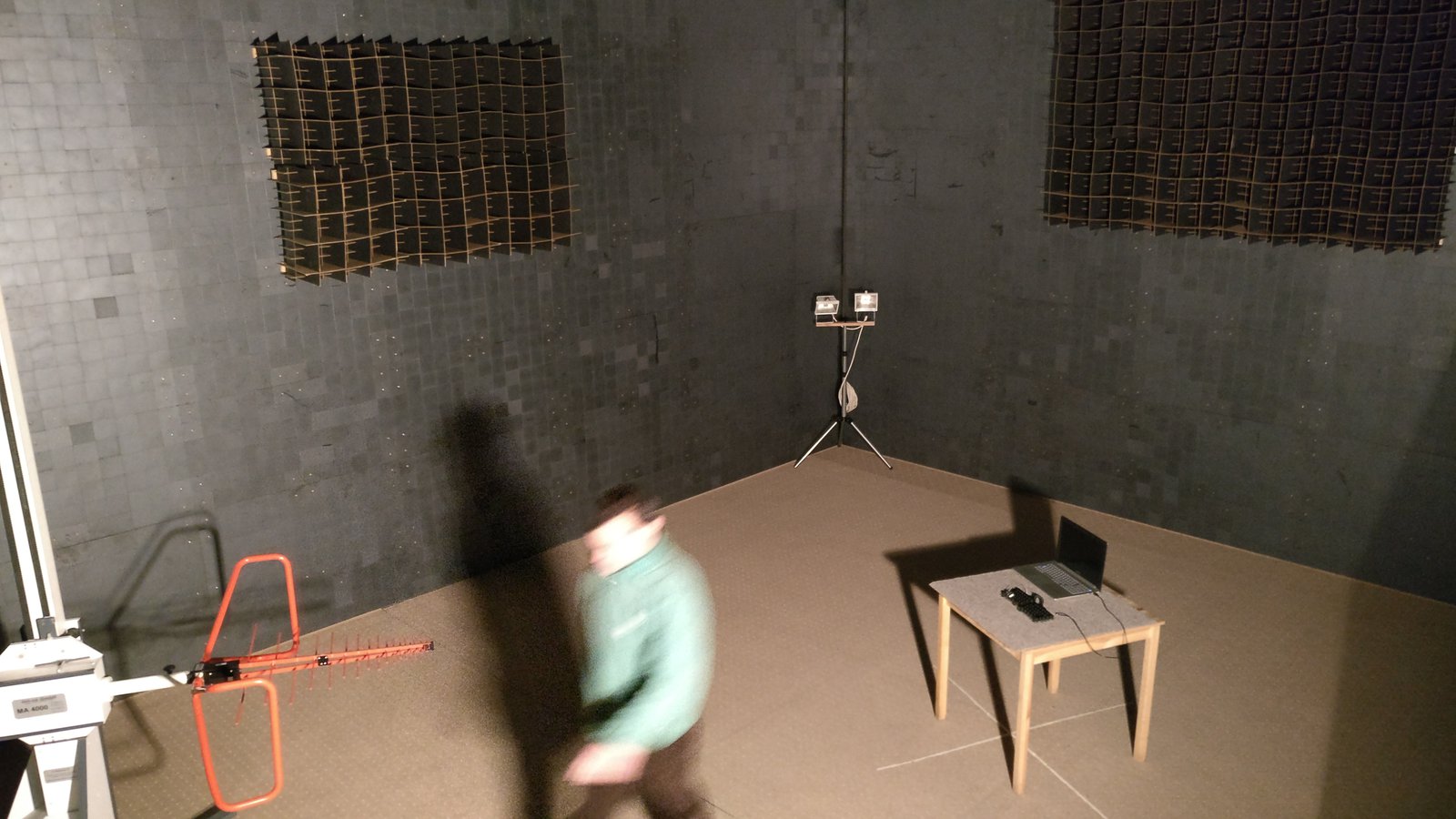 In this setup, the UHK is plugged into a laptop and sits on a table, measured by the scary bigass antenna in the corner. Let’s take a closer look at it. 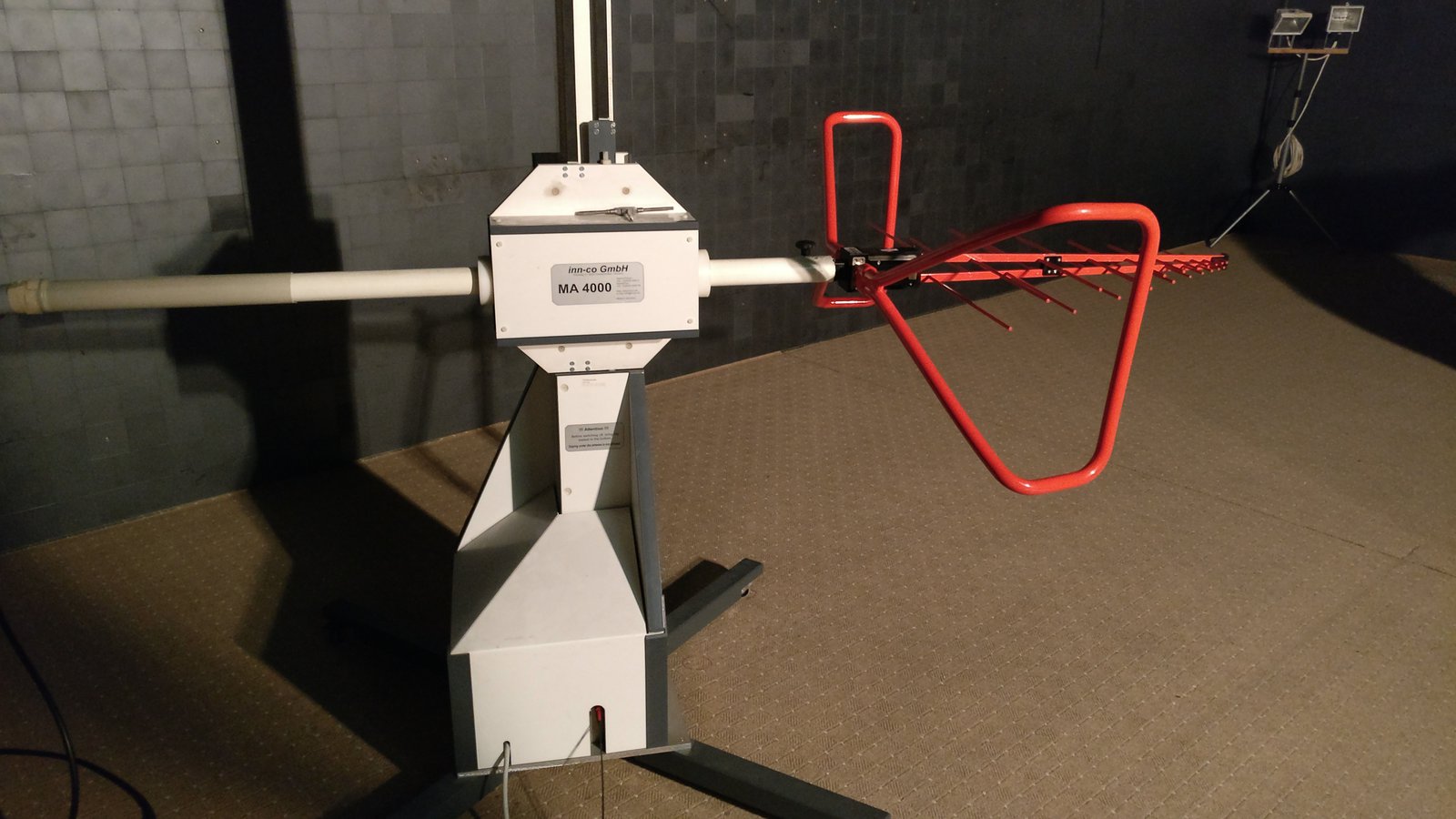 On this image, the antenna is oriented horizontally, and it stands in its lowest position, but it can rise way, way up. 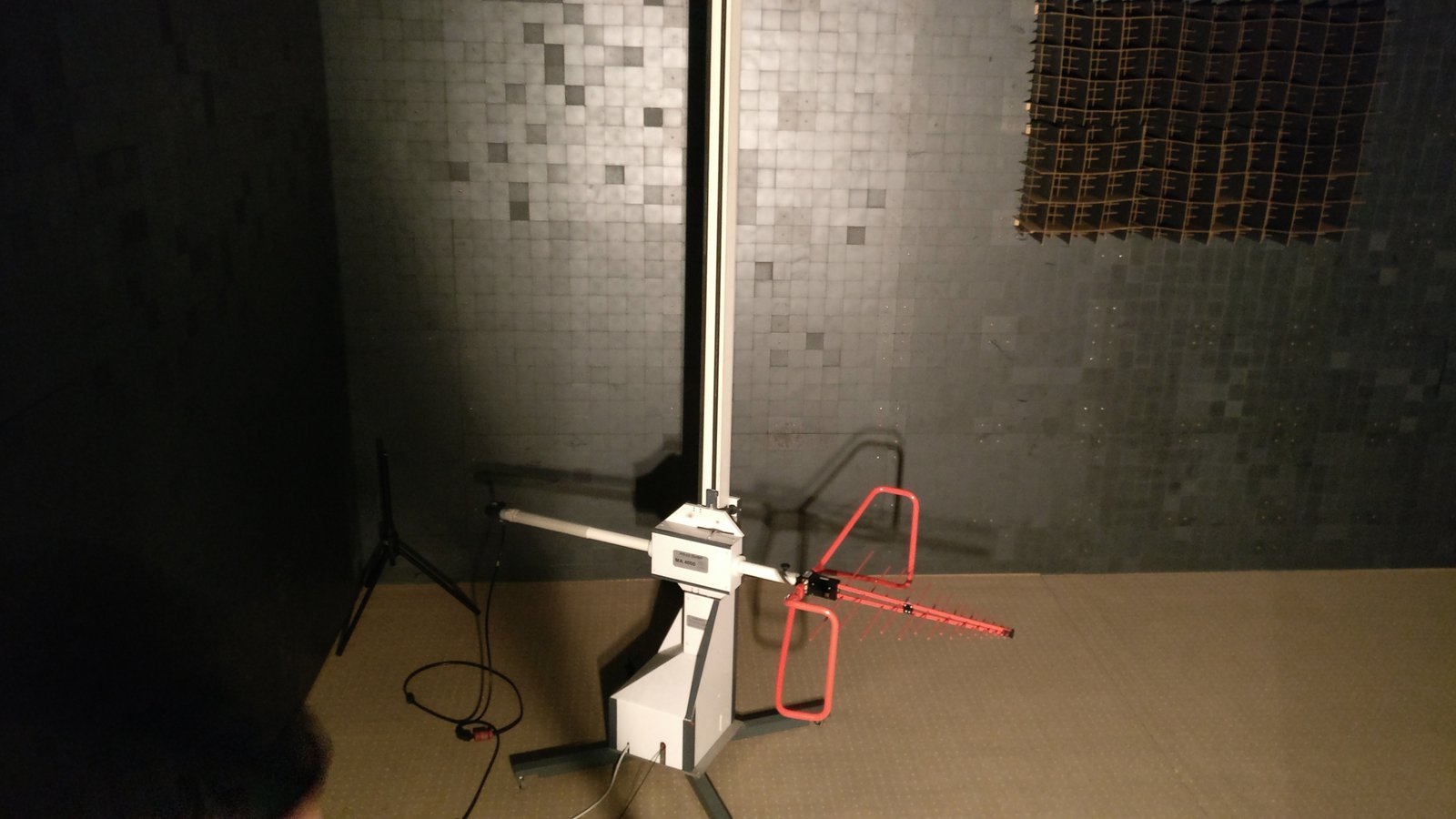 During a measurement session, the antenna rises 4 meters upwards, then rotates its head vertically, and also does measurements that way. The result of the measurement is a graph. 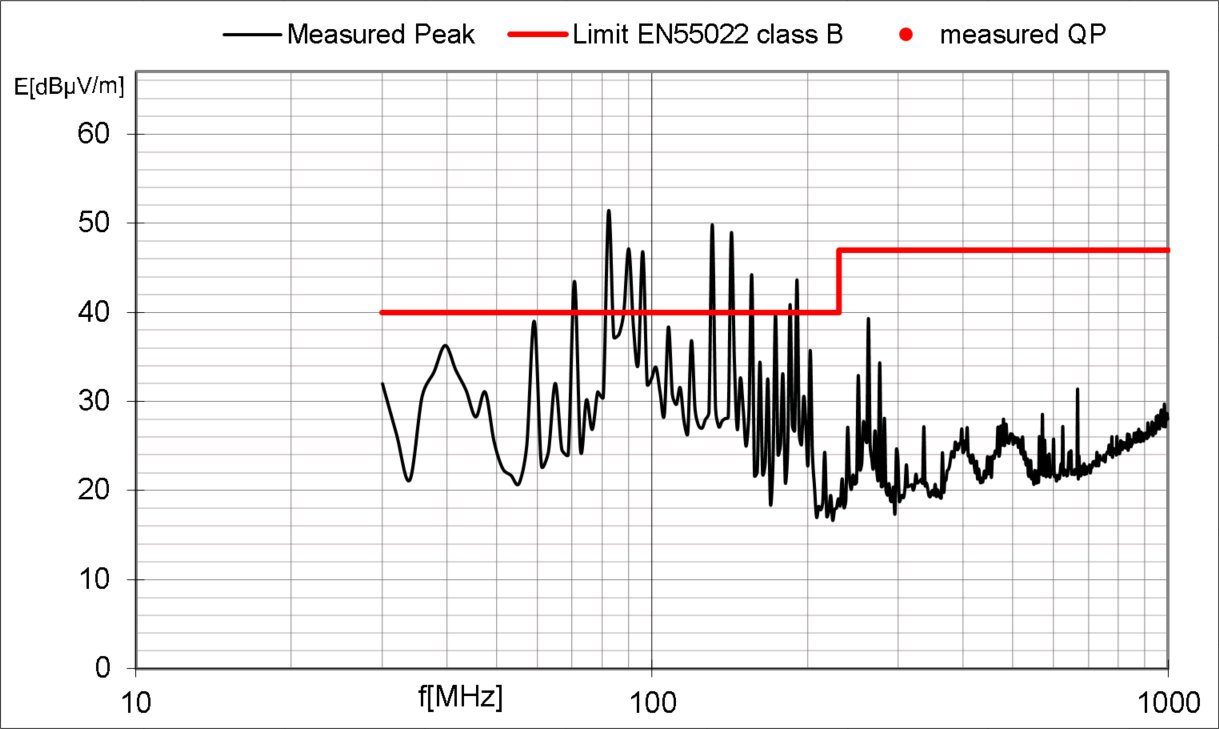 The goal is to stay below the red line which we only achieved once out of 15 measurements: when the UHK was powered from a USB power bank, and hence it only received power and USB communication was inactive. 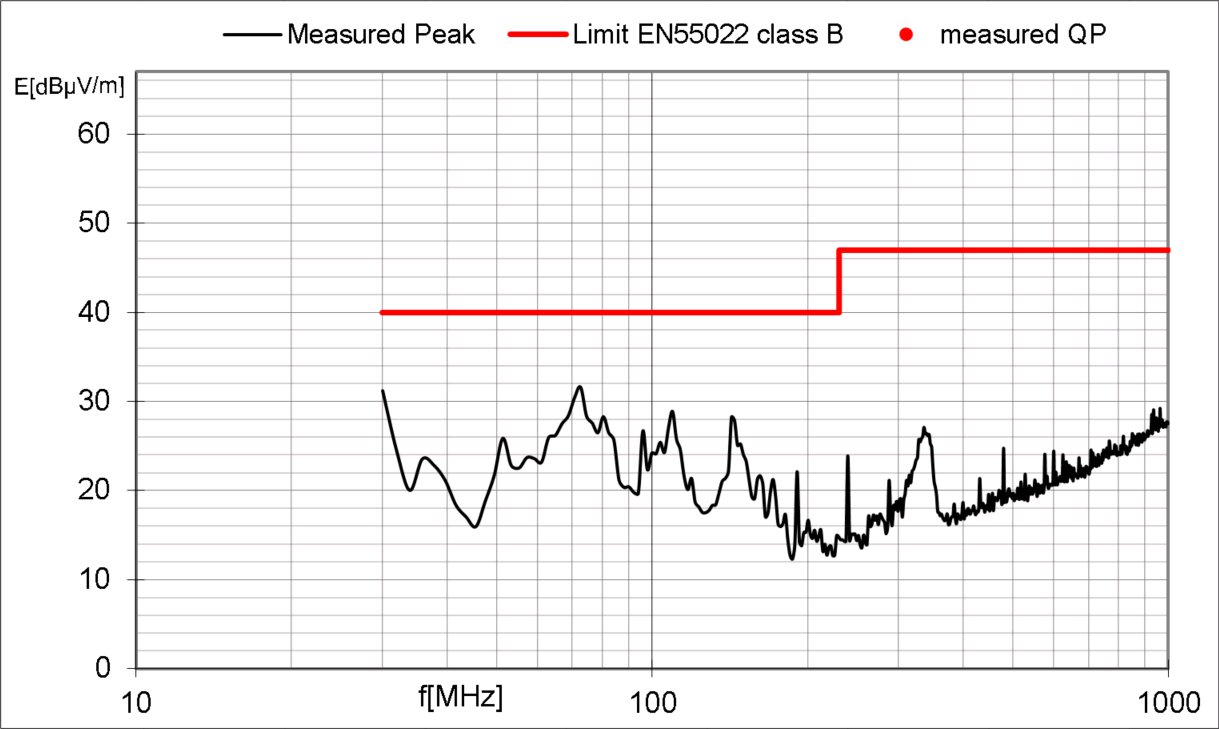 So according to the measurements, we have a good reason to believe that the USB circuitry of the PCB is not routed optimally. Even though I couldn’t foresee this, it’s not all that surprising because I routed the PCB using some external help, and I’m not an electrical engineer.

I’ve been told that failing the first test is pretty usual, and we shouldn’t be overly worried. In any case, it’s apparent that the time has come for me to resign as a self-taught PCB designer, and hand over the redesign of the PCB to a professional. As a matter of fact, I may have already found the right person. More on him in the next update.

As a last word of this section, I’d like to sincerely thank Robi for helping so much in the lab. His help was critical to figure out the exact problem.

Free and Open Source software is known for attracting numerous contributions, and we’ve been fortunate enough to receive our fair share. Which brings me to Gergely, who is the king of the hill when it comes to keyboard firmwares. 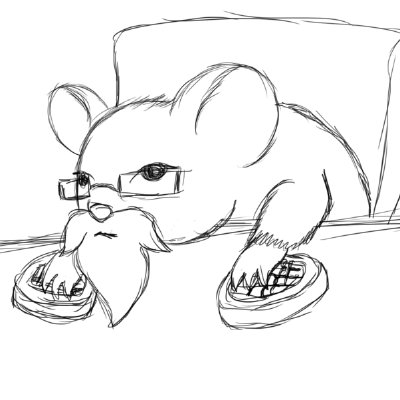 My name is Gergely Nagy (or algernon, for those who don’t speak Hungarian), and I’m a jack-of-all-trades kind of free software zealot. I first came across the UHK in late 2014 when I was looking for a new keyboard. Since that time, I ended up contributing to QMK (the firmware that powers my current keyboard), KeyboardioFirmware (which will power my next keyboard), and I couldn’t help but contribute to UHK’s firmware too, which will power my mother’s next keyboard. I may have developed a thing for keyboard firmware, much to my wife’s regret. My current focus is parsing the config sent by Agent, and teaching the firmware to apply that at run-time. …and whatever else I can find the time for.

To this day, Gergely has been working on three entirely different keyboard firmwares, which unquestionably makes him one of the most knowledgeable contributors we can ever wish for. He’s been hard at work with the UHK firmware, and ended up implementing loads of features, including mouse keys and, most importantly, a significant chunk of the configuration parser. And it looks like he still hasn’t had enough!

Our deepest gratitude, and a UHK with all the bells and whistles goes to Gergely!

At the same time, Jozsi was working on Agent, making it able to transfer the selected layer to the UHK via USB. Seeing the configuration getting effortlessly updated in a blink of an eye via USB is magical. It’s very nice that all of our hard work pays off.

We keep making rapid progress and most things proceed according to our schedule, but not everything. The EMC issue is something we couldn’t foresee, and the PCB redesign will affect our delivery schedule.

According to the above, we are moving the release schedule of the UHK and palm rest to the end of April. We wish we could do it sooner, but as a startup, we are destined to go through these hoops, and learn things the hard way. After releasing the first UHK model, creating further products is going to be so much easier!

As always, we will be keeping you updated on a monthly basis in our newsletter/blog, and on a weekly basis on social media. Should you have any questions, you’re always welcome to reach us.