TL;DR: We’ve released a new Agent version after a long time without changes. We’ve made a functional key cluster module, and made progress with the trackpoint module.

It’s been a whopping ten months since we released the latest Agent version. We’ve actually been working on Agent since the latest release quite consistently, but weren’t able to publish a release due to the lack of a valid Windows Authenticode certificate. Long story short, we finally have a certificate, and recently released new Agent versions.

Feel free to check out the changelog on the GitHub Agent releases page. We’ve mostly fixed and polished a number of issues. A particularly useful feature is a dedicated Mac pointer speed preset which you should try out if the UHK mouse pointer movement feels slow on your Mac.

We’ve also implemented the fanciest UHK feature to this day: Agent shows whether the UHK is split or merged, and displays whether the left half is connected. Obligatory demo follows:

Admittedly, this is pretty useless in itself, but it’ll actually be useful in the future. The same mechanism will be used to show the modules. Imagine connecting your modules, seeing them show up, and be able to configure them with a click of a button. And talking about modules…

(UHKs are not backlit yet. We’ll release a backlight upgrade kit at some point, and future UHK hardware versions will be backlit.)

You probably noticed the little thingie at the bottom of the key cluster module. 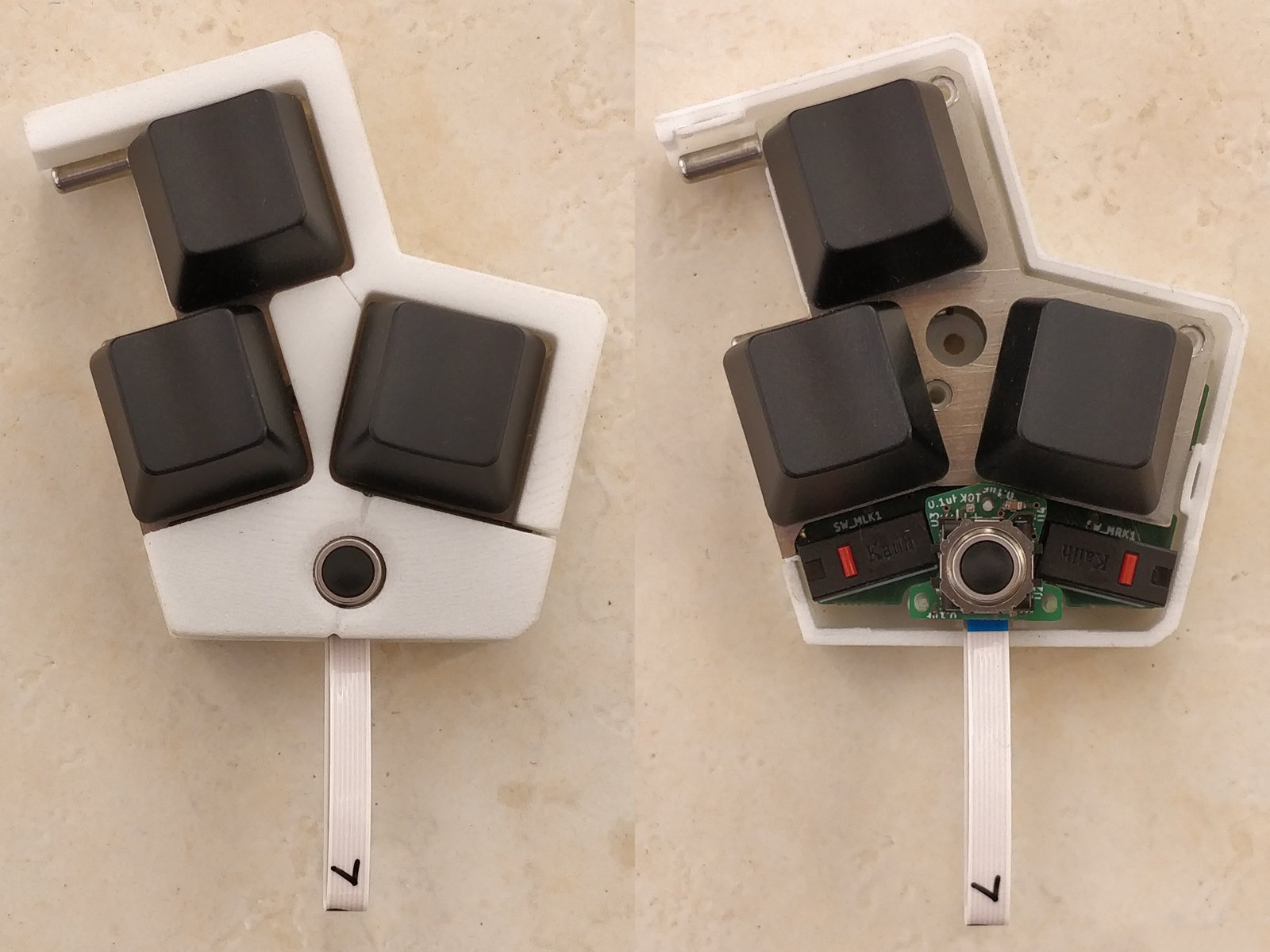 As you can see, it’s an FFC cable. Our current FFC cable manufacturer couldn’t make a cable of merely 13 mm length, so we used a much longer off-the-shelf cable for the time being. I actually doubt whether an FFC cable of such short length can be made, but an FPC (flexible printed circuit) can surely be made. But we’ll probably end up using a rigid-flex board as the best solution.

Apart from the above slight change, there’s another issue. I noticed that the responsiveness of the trackball is lacking compared to the previous prototype. The new, smaller hall-effect sensors are probably not sufficiently sensitive to pick up all the magnetic state changes of the mini trackball. 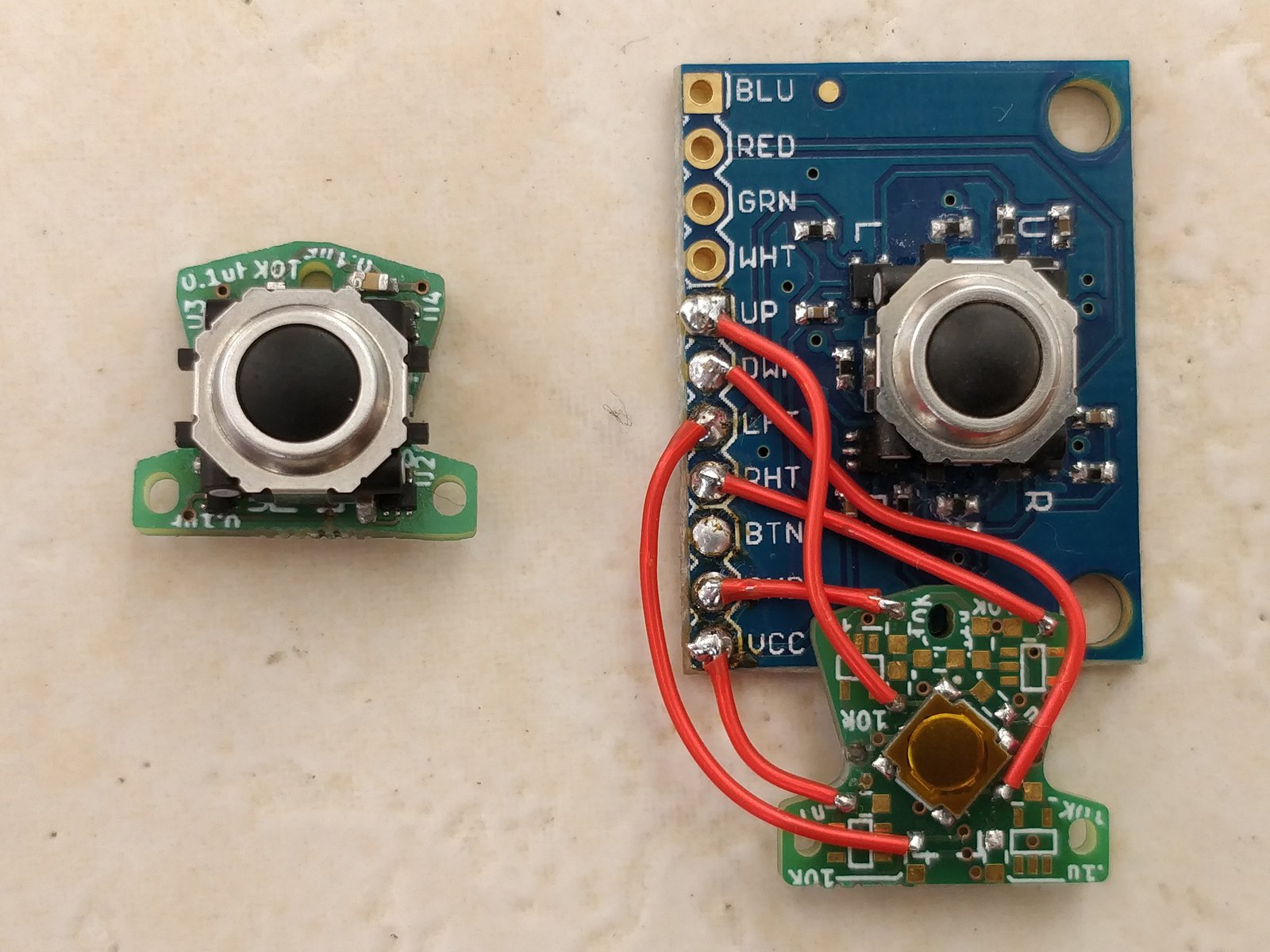 I think we’ll revert to the previous hall-effect sensor, and try to pack them tighter to be able to fit them on the board.

We’ve made progress regarding the interconnection of the top and bottom trackpoint boards. There isn’t enough space for an FFC connector on the top trackpoint board which contains the actual trackball sensor, so the cable needs to be directly soldered to it. I designed an FPC for this purpose, and we plan to use hot bar soldering to affix it to the top board. 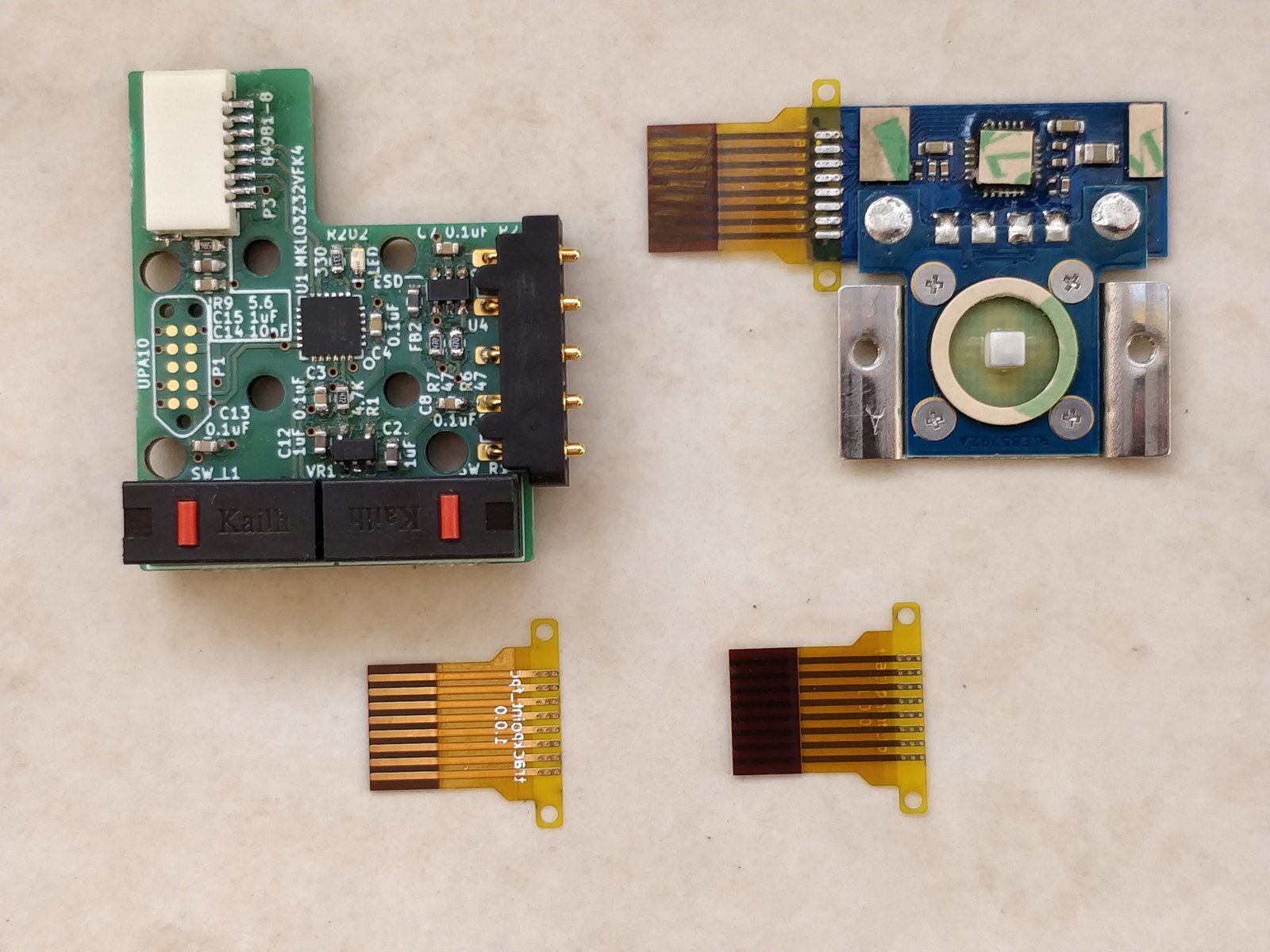 I used a soldering iron for prototyping purposes. So far, so good! 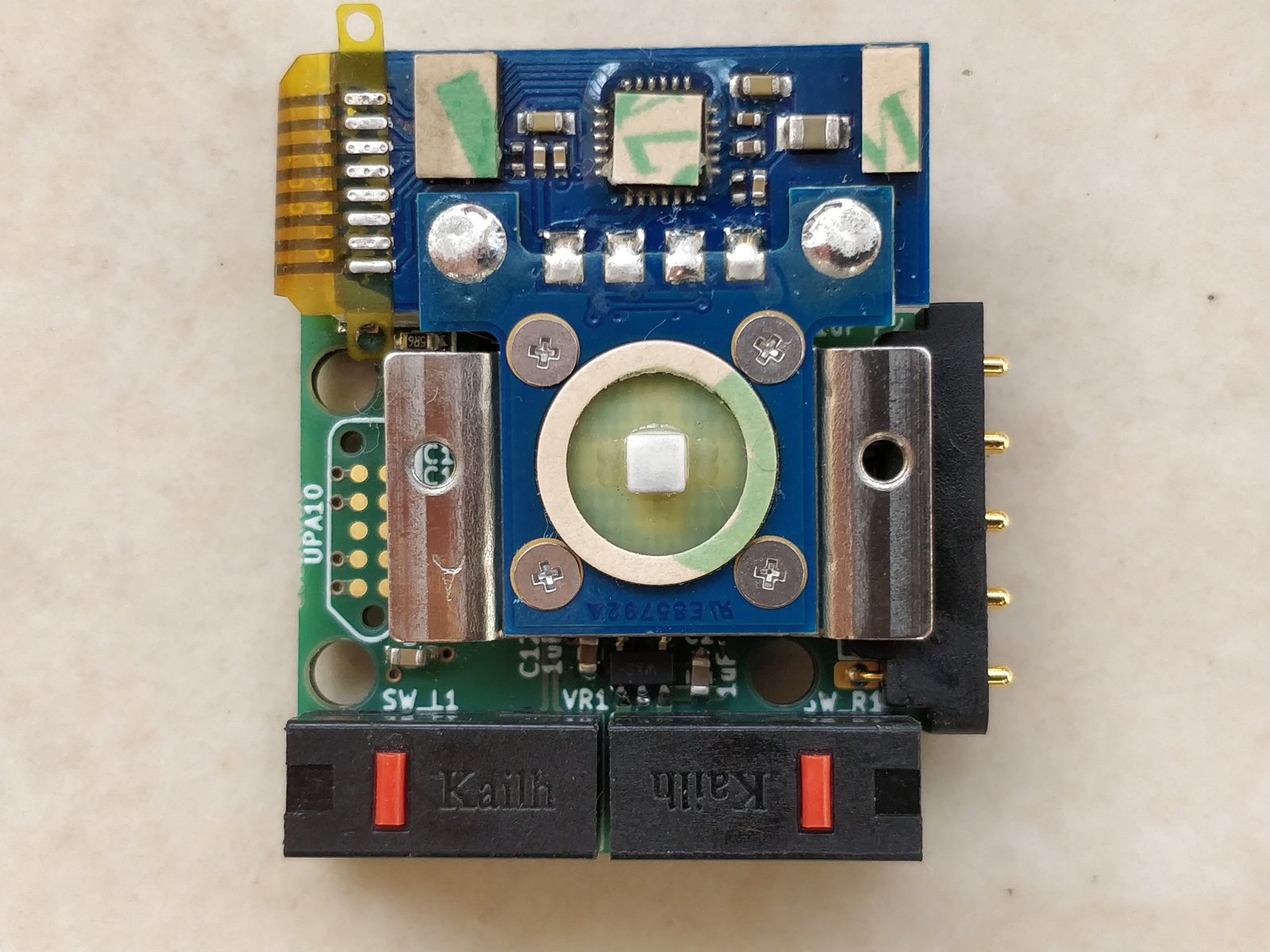 This module should work well, and I’m excited to write firmware for it, and for the rest of the modules.

ShopzadaPH has made an awesome unboxing video of the UHK which you’re welcome to watch:

You guys keep sending your awesome tweets, and we’re always eager to read and feature them! If you got your UHK, please share your love! 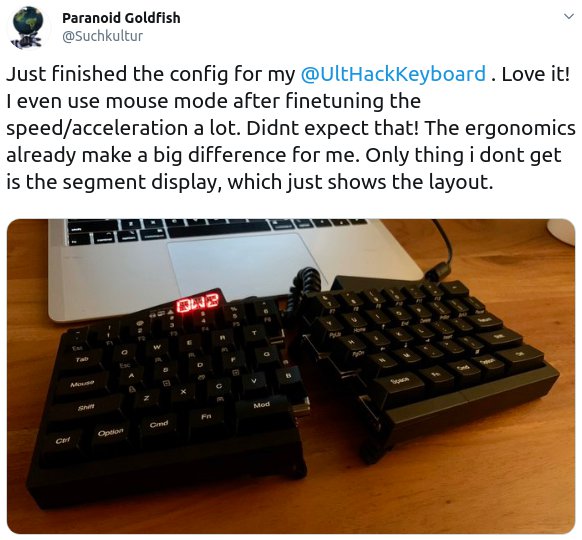 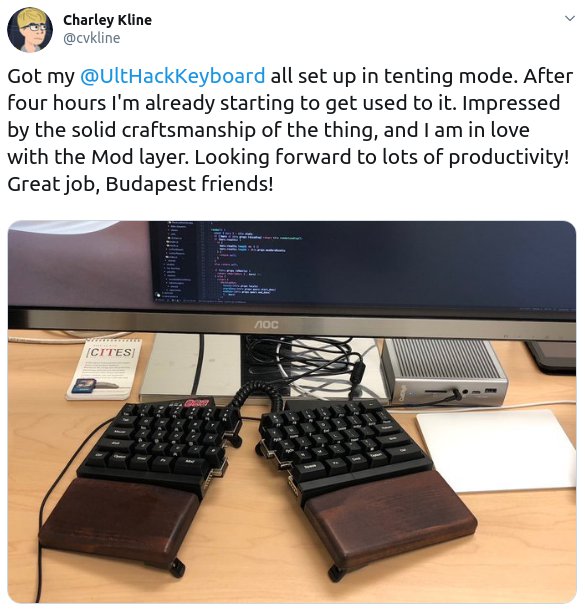 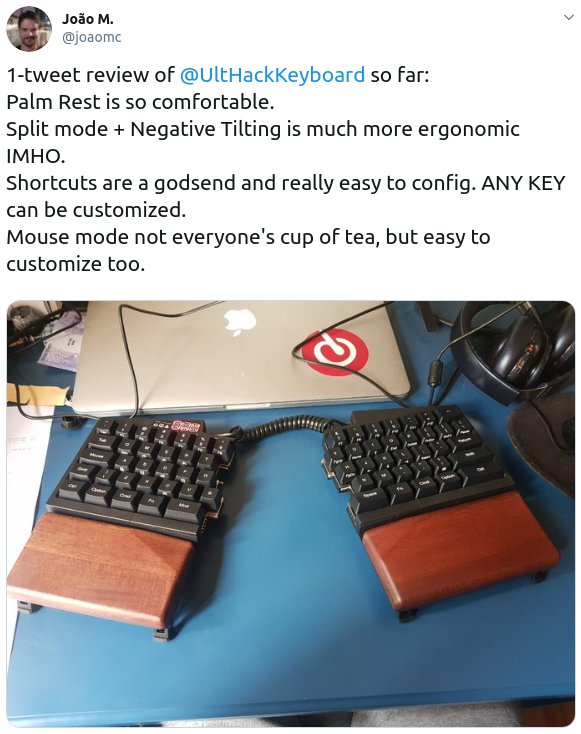 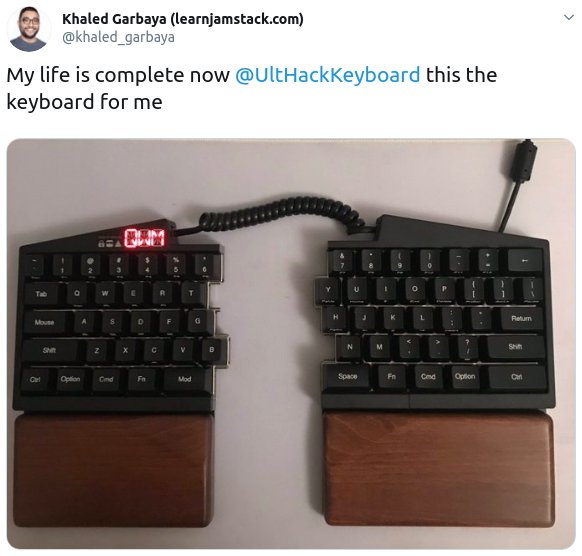 We’ll be keeping you updated on all things UHK, and are looking forward to talking to you on 2019-11-11.