Shipping is about to resume

TL;DR: Delivery temporarily stopped due to the shortage of packaging material which should resume around February 20. We expect to ship every non-module preorder by the end of March. Regarding the ETA of your order, please check out the delivery status page, including its FAQ section.

Hi there, and welcome to our monthly status update! Let’s get right to it!

Since our previous monthly update, we’ve built plenty of UHKs, but we couldn’t ship most of them due to a temporary shortage of packaging boxes.

It’s taken more time for the printing factory to get up to speed after new year, and they expect to deliver the packaging boxes to us on February 20. We’ll make quick progress once the boxes arrive, and expect to deliver every non-module preorder by the end of March.

We didn’t simply ask for another batch of packaging material to be honest. We redesigned the boxes because they weren’t sufficiently robust. The new boxes are not only fancy, but more robust (and more expensive).

I added a news section to the top of the delivery status page which you’re welcome to check any time. This way, you can keep informed about delivery status the easiest way possible.

In our previous monthly update, we told you that the we’ll exhibit at DeveloperWeek in the Bay Area on February 21-22. Unfortunately, we won’t be able to make it.

The reason is that I fired our marketing contractor because I found his work ethics to be extremely poor. Without him, we can’t staff our booth, so I ended up cancelling the event. Admittedly, this timing is unfortunate, but I only regret having him so long. Of course, no personal data was compromised during or after his time with us.

With the event cancelled, we won’t be able to give away the free passes offered in our previous monthly update. That, I regret. I’m sorry about this, but now that we have cancelled the event, we can’t do anything. I’ll email all of you who asked for free passes shortly after publishing this update.

As far as the project is considered, I think not attending to DeveloperWeek is actually a good thing. We should fully focus on the delivery of preorders at this point. We’ll have plenty of time to do expos later.

Robi has implemented the kboot bootloader protocol natively in Agent. Previously, Agent used the external blhost command line utility which was unreliable. This will make firmware updates more reliable which is very important because the modules will require a new firmware version flashed to your UHKs. We have yet to release a new Agent version that contains this improvement.

In the meantime, András advanced the mechanical design of the key cluster module, so it’s closer to the final design to be mass produced.

As stated in earlier updates, we can’t fully focus on the modules yet. Only after shipping every non-module preorder and transitioning to on-demand manufacturing will be able to make heavier progress regarding the modules.

Mikko Ahlroth wrote a very nice UHK review on his blog. I love reviews like his which go into details and capture many facets of the UHK.

In the meantime, Brett Terpstra has been exploring the wonderful world of custom keycap sets. He pimped up his UHK, and wrote a blog post titled The addictive hobby of customizing mechanical keyboards. 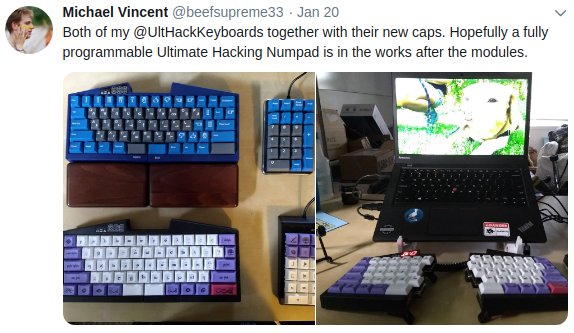 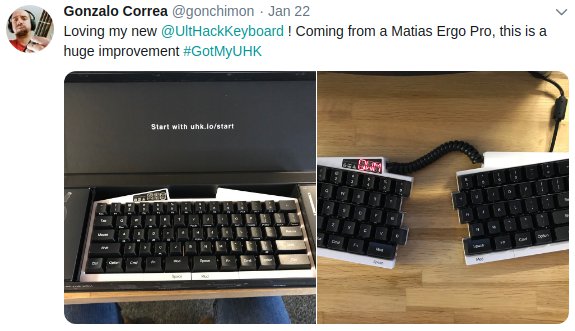