Updated delivery schedule and a bonus

We’re looking for an electronics engineer!

Another month has passed, and so it’s time for our monthly status update! This one will contain a bad bit of news, a good bit of news, and lots of news bites on our progress.

Over the last few months, a lot of you have been giving positive feedback on our progress and appreciated the detailed updates. According to our Crowd Supply campaign page, the goods are expected to ship at the end of September.

We’re trying our best to deliver on time, busting our ass day by day, usually even on weekends, and still, it’s quite apparent that we can’t meet this deadline even if we bend over backwards. So the delivery schedule needs to be revised::

Please let us explain the reasons.

Our April delay that was caused by our previous bank (which we abandoned forever) has definitely contributed to this one, as it caused a lot of overhead, and we could only pay to our mold making contractor in a delayed manner.

Another reason is design delays. We have just finished the design of the feet and the palm rest. Getting the design right has definitely taken longer than expected and now the molds of the feet are about to be made. As a rule of thumb, we rather take the time to get the design right than to rush things and end up with a mediocre product.

We’re running things in parallel as aggressively as we can to hit our updated schedule. For example, a mold of our special keycaps just got ready in Taiwan, the mold of the case and the cutting tool is being created in Serbia, and our contractor for the LED display has just started to work on their mold.

We’re very sorry for this delay. We understand that you can’t wait to put the UHK under your hands and waiting sucks. We’re asking for your patience and to remedy the situation a bit we’d like to offer something, which is an…

There are plenty of ways to make a palm rest and we have considered various designs over time. One of the candidates involved a beautiful anodized base plate milled from solid aluminium. 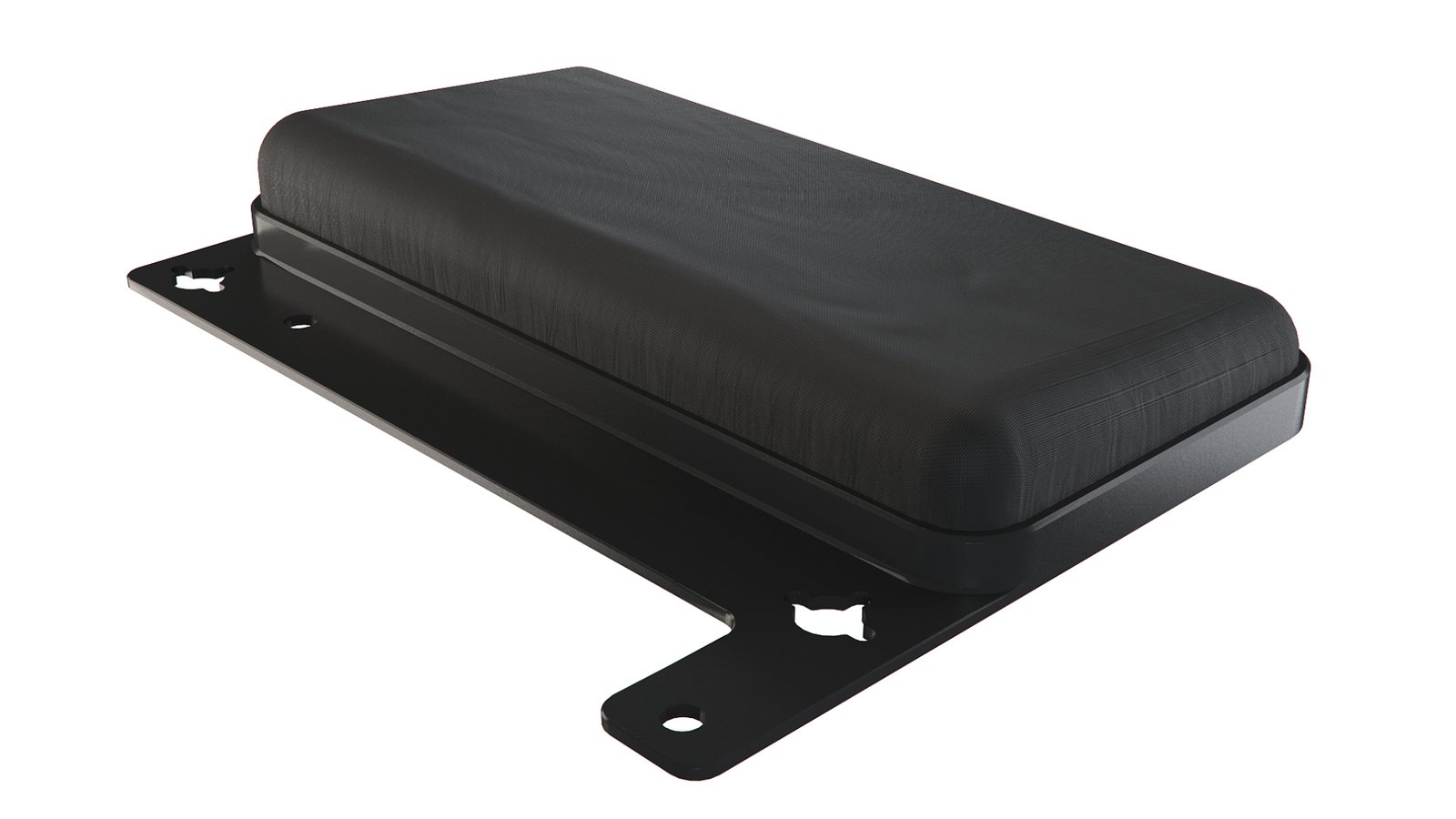 Of course they come in pairs. This is the left one.

The remaining molds are also in the works, and in our true style, we’ll be posting more pictures as they get made.

I’m happy to let you know that recently, our keycap supplier got the molds ready for these keycaps and sent us a couple of samples: 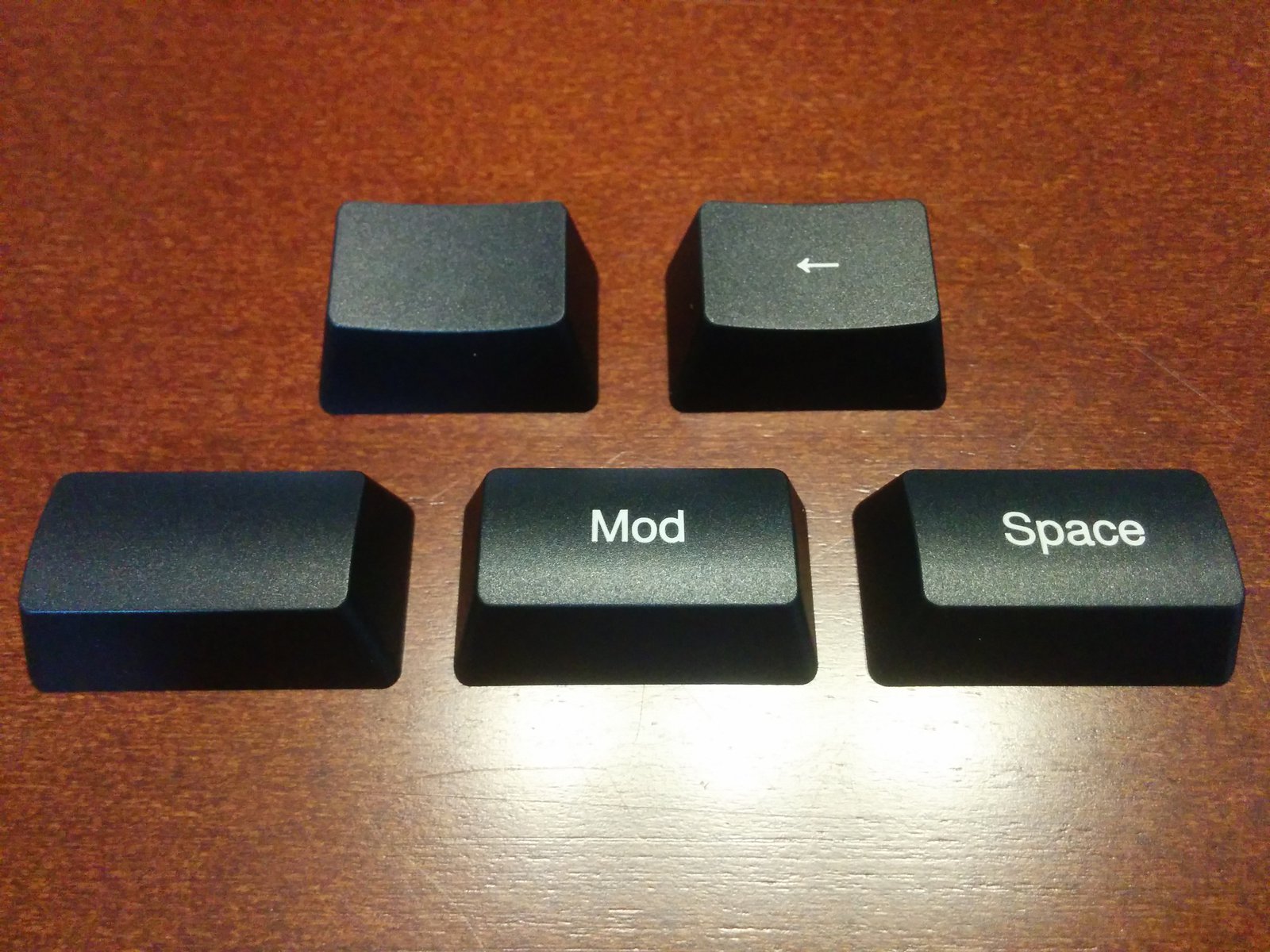 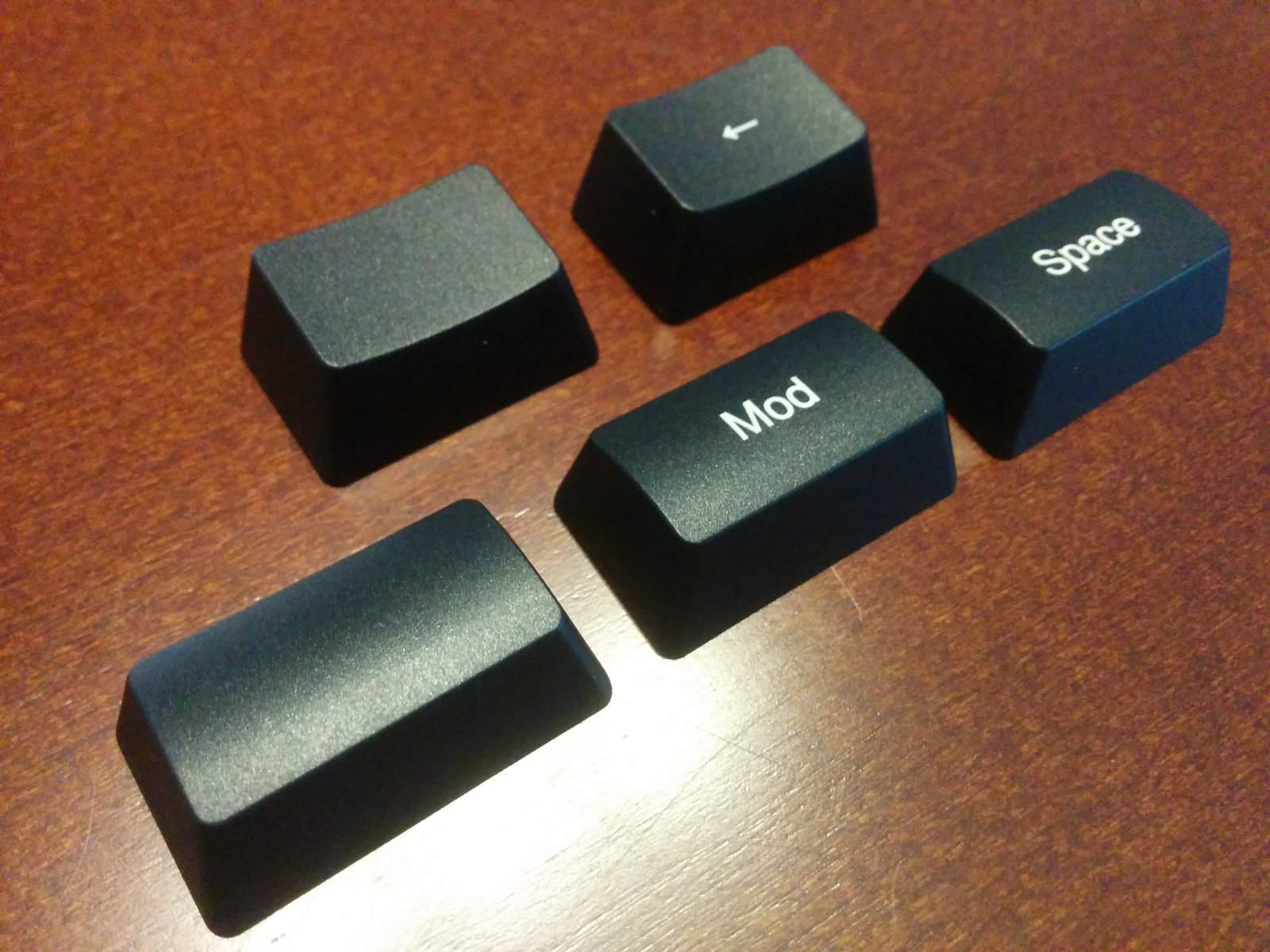 These custom keycaps are impeccable and totally consistent with the rest, just as expected. They put a smile on our faces because custom parts like these are major milestones for the project. The state of the add-on modules Not much has been said about the add-on modules recently, so it’s time to share some information on them. We’ve actually made a couple of videos of them in action, so that you can get an idea how the modules feel and behave.

Please note that the plastic case and electronics of the modules are not ready yet. So far, the key components have been chosen so we show you the guts of the modules directly connected to the PC.

If you are curious about the exact ICs that we use inside of the UHK, or in the add-on modules then you’re welcome to delve into our datasheets repository.

As for the number of buttons of the right-handed modules we’re not exactly sure yet but we’re aiming for two buttons per module.

Let’s see what we have!

The trackball module features an ADNS-3530 optical sensor which is remarkably tiny and communicates over SPI. This demo board translates SPI to USB but we’ll use a KL03P24M48SF0 microcontroller to translate SPI to I2C which is spoken by the UHK.

The trackpoint module features a sensor of an unknown part number (our OEM signed an NDA with the manufacturer so we don’t know) but it’s remarkably similar to the now defunct SK8702 trackpoint module which features the SK7102 controller. Our OEM only provided an incomplete datasheet to us, which is not a major problem because the module speaks PS/2.

We’ll use the FlexIO capability of the KL03P24M48SF0 microcontroller to implement a protocol translator which will translate from PS/2 to the I2C protocol of the UHK.

This is an Azoteq ProxSense TPS43 touchpad driven by the Azoteq IQS572 capacitive controller. The touchpad is connected via the Azoteq CT 210 configuration tool to the PC.

Being an I2C device, the controller will directly connect to the UHK. We’ll have to design a custom-sized touchpad, however, featuring the IQS572. Luckily, Azoteq provided a design guide for that.

It’s not a coincidence that I mentioned the name of Azoteq a fair number of times above. Back in the day I blogged that we’re looking for a suitable part, then they contacted to us and provided the most awesome support ever!

The key cluster module features a couple of keys and buttons which are simple to scan by the microcontroller. The tiny trackball is a Blackberry trackball which uses hall effect sensor along the 4 axis. We haven’t yet hooked up the Blackberry trackball to control the mouse pointer but you can find plenty of videos on YouTube of its various applications. I recommend watching Sparkfun’s video of their trackballer breakout board which explains it in detail.

A while ago, we reached out to you looking for a firmware developer. We’ve gotten quite a few excellent applications and please let me take the opportunity to thank every one of the applicants for contacting us.

Without further ado, let me introduce you our firmware developer, Santiago González Fabián from the sunny city of Madrid. 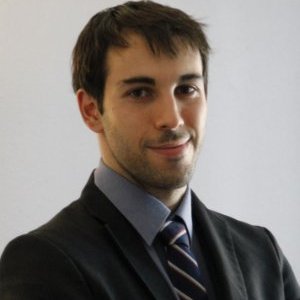 My name is Santiago González and I’ve been playing with electronics and computers since I can remember, but I discovered the amazing world of embedded systems in the Electronics Engineering Bachelor where I felt in love with 8051 and ASM code. I’ve programmed 8 bit and 32 bit MCUs in C and Assembly mainly, and my focus the last 4 years has been the Cortex M world, working at Freescale and NXP as Field Application Engineer trying to solve all kind of issues with Embedded Systems all over Spain, from Automotive to Industrial equipments, from 8 Kb Flash devices toggling LEDs to 2 MB Cortex M7 doing Ethernet, Motor Control and RTOS scheduling at the same time.

Embedded systems are my job and my hobby (Although I also climb mountains in the weekend) so in my free time I look for new challenges in several places (Stack Exchange, HackADay, Electronic Forums…) and that’s how I met László and UHK, in my weekly check of NXP Community. After having a look into the project and the open source philosophy behind it, I decided I would love to help if possible. Now the UHK PCBs have arrived to Spain, so I can begin the Bootloaders development :). I cannot wait to start coding! 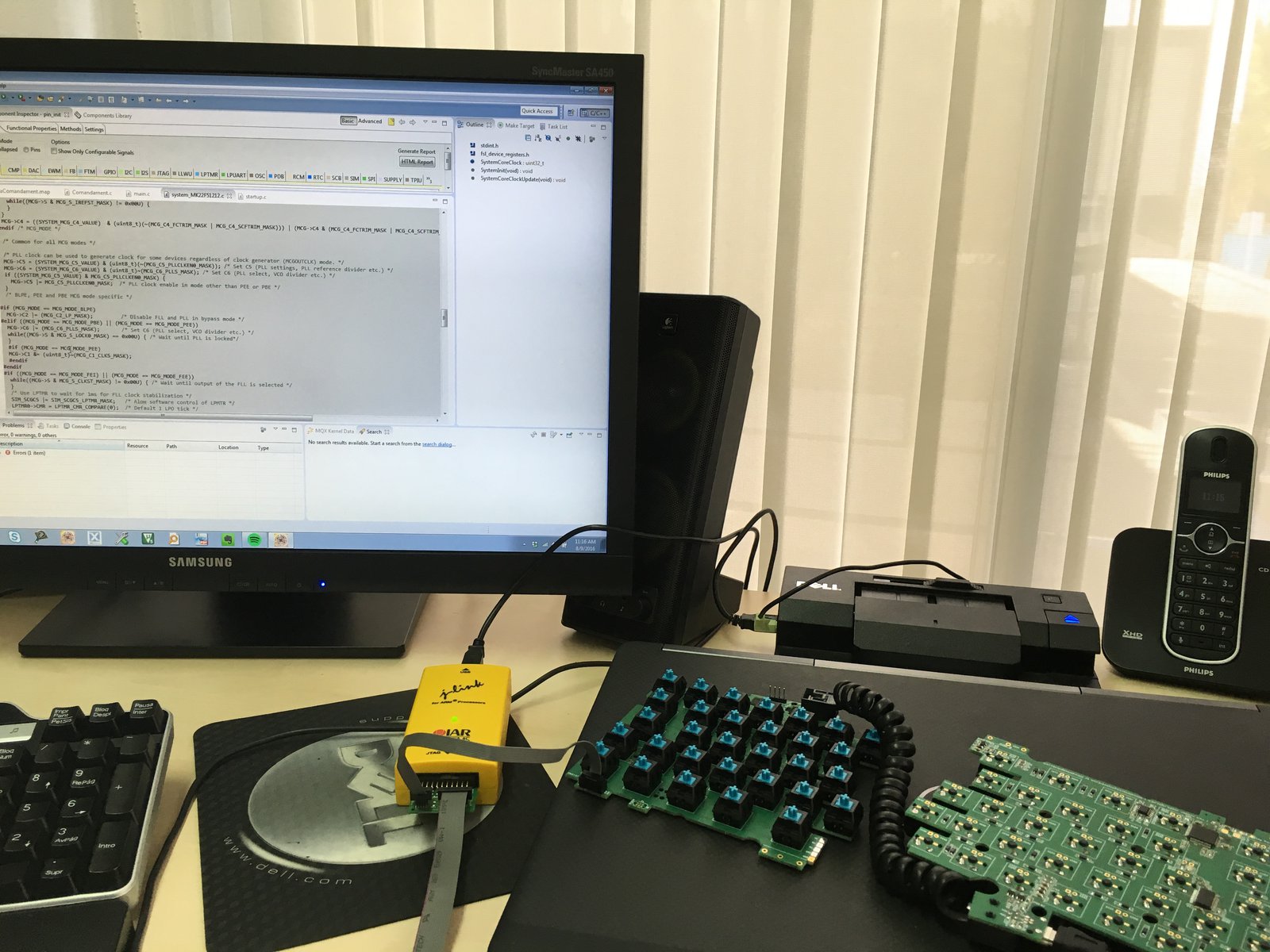 Since first getting in touch with Santiago, I’ve exchanged almost a hundred emails with him about deep technical stuff. It’s apparent to me that he’s highly knowledgeable, a truly excellent communicator, and his enthusiasm clearly shows. We couldn’t ever wish for more than that.

The bootloaders of the UHK are a lot more complex than those of regular keyboards. This is because the design is highly modular, composed of separate keyboard halves and add-on modules, each running separate firmware images. So naturally, we want to enable you to upgrade the firmware of every module over USB with a click of a button.

KBOOT 2 already supports the above scenario, but a fair amount of customization has to be done by somebody who really knows what he’s doing.

Apart from implementing the bootloaders, Santiago will be working on parts of the firmware that require deep knowledge of the Kinetis platform, like the FlexIO based PS2 to I2C protocol translator of the trackball add-on, and such.