TL;DR: The Hall of Fame, mysterious blinking lights, our upcoming AMA session (next Wednesday at 11 AM Pacific), and a viral bonus challenge for two skulls!

Seeing all of your tweet-sized programs brought us much joy. You played a buzzer, animated WS2812 matrices, and…well, we’re impressed!

Your names now appear in The Skull’s Hall of Fame. The race to the top begins! (We’re still figuring out the details but we’ll share them with you soon.)

On Monday night, under the light of the Beaver moon, we descended into the Catacombs of Paris as midnight approached. We forgot to bring a flashlight, but we had a few white LEDs and a battery-powered soldering iron, so we swapped out the eyeballs on one of our Skull boards and used it to light our path into the Land of the Dead, where we scoured the dank corridors of the underground ossuary for some good ol’ fashioned bones.

After sorting through endless piles of archæic skeletal remains, we eventually found this lovely specimen: 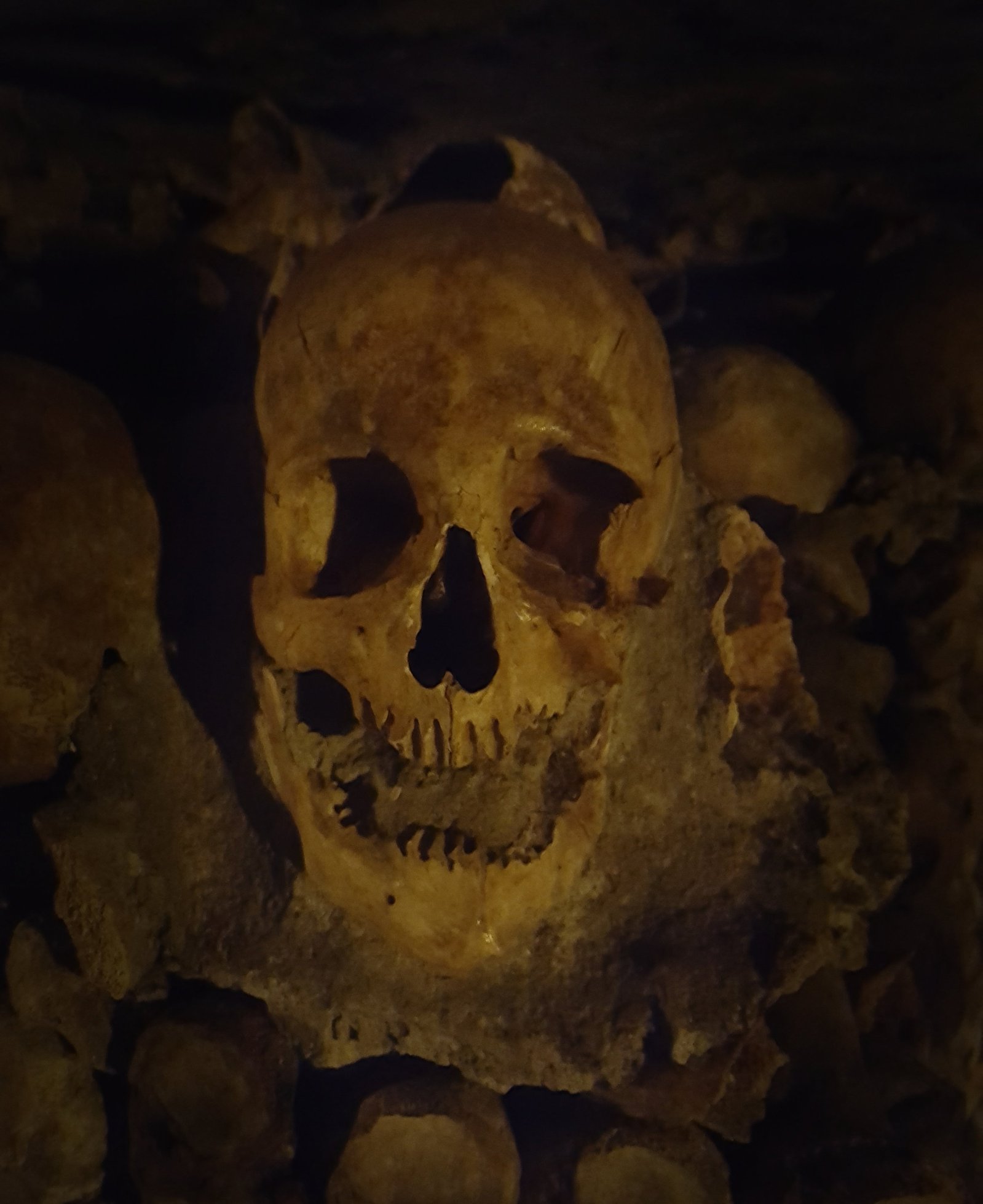 Do you recognize him? That’s Vanquished Roger! Meeting him face to face was a real treat (even though he’s still a bit sulky after his humiliating defeat at the hands of Victorious Jack).

At any rate, we wired our mysterious EEG device up to Roger’s timeworn cranium, fed the output into one of our Skull boards that was not in use as a DIY lantern…and her eyes began to blink!

But what was she saying!? Can you help us to figure it out? Hit us up on Twitter (or email uri+skull at wokwi dot com), and maybe your name will end up in the Hall of Fame as well!

We received a letter from Crowd Supply’s legal team in which they threatened to "sue [us] out of existence" unless we agreed to host an Ask Me Anything (AMA) session on their Discord channel. So that’s what we’re going to do. Please join us next Wednesday at 11 AM Pacific Time!

And rest assured, we’ve already figured out how to get back at those jerks. Don’t tell them, but we’re planning to encode our most sensitive answers using a state-of-the-art substitution cipher. Good luck stealing our secrets now, Crowd Supply! (For the rest of you, see the paragraph below. If you manage to decipher that, you’ll have the key you need to decode our AMA responses as well.)

And finally, some good news for y’all! We’re working on a special bonus challenge called "The Virus." If you want to try it out, you’ll need two or more Skulls, so plan accordingly. Fair warning, though: it’s going be more even challenging than the three riddles that already exist, so it’s definitely not for the faint of heart.