Happy 2019! We wish you all a healthy and successful year full of new experiances and new things to learn!

In this update we talk about Piotr’s visit to 35C3 and the overwhelming interest in open source FPGA at the event. An amazing display that our friend @vifino built, as well as great videos by MickMake and Alex Glow featuring the iCEBreaker.

Piotr will be back at 1BitSquared HQ in about a week. We will then start working full steam ahead to begin production of the iCEBreakers as soon as possible. We still have a week and a half left of the campaign so make sure to spread the word! :D

Now to the verbose update. ;)

35C3 in Leipzig, Germany is now over, it was an incredible success! Thanks to our collaboration with Symbiotic EDA, we ran 9 WTFpga workshops over the four days of the event. Thank you to everyone who attended the workshops and we are very sorry that we could not accomodate everyone who wanted to take part. 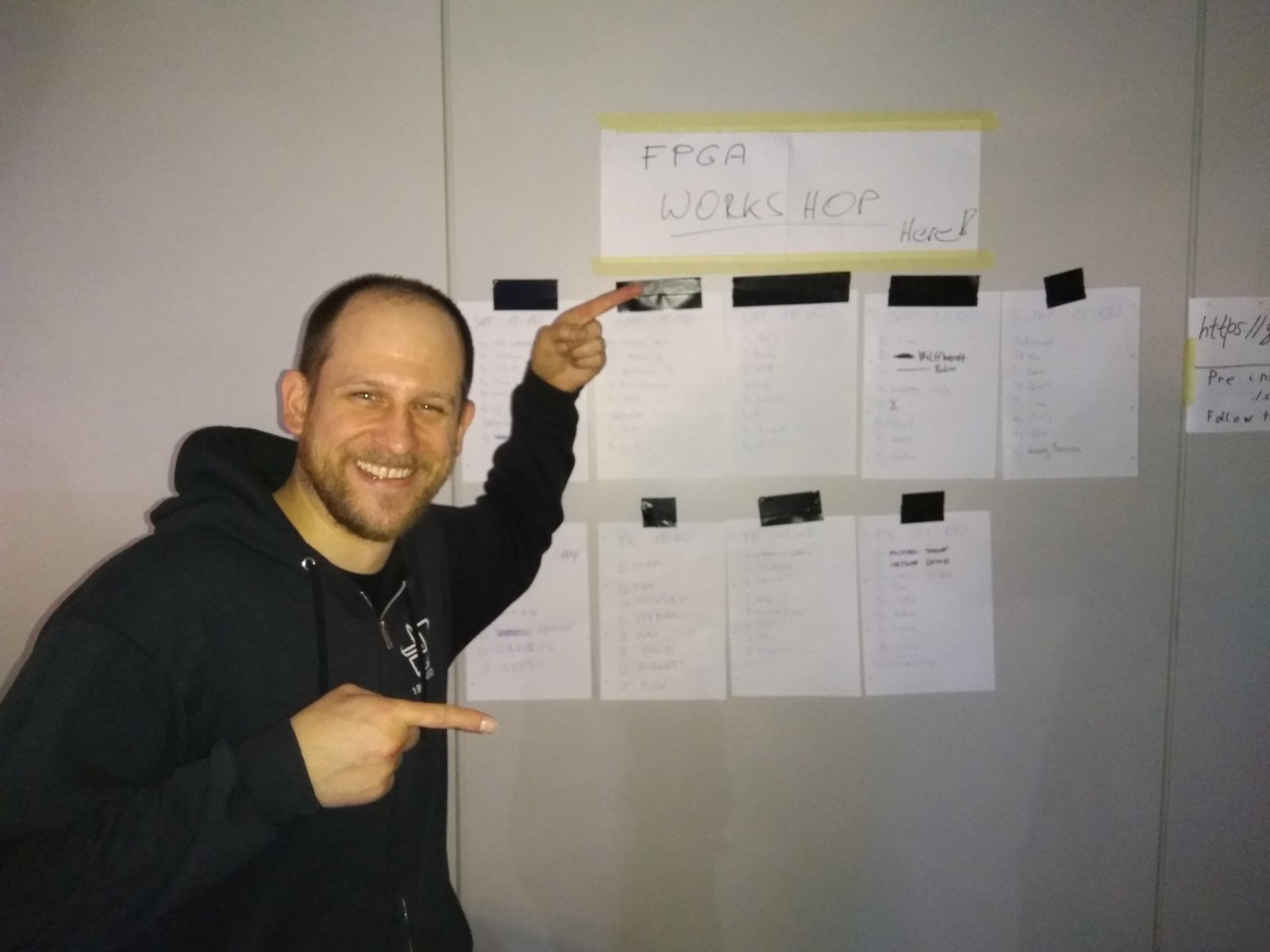 Lot's of workshop slots, all full

We are overwhelmed with the incredible interest in open source FPGA tools, the iCEBreaker, the workshop and FPGA in general. Piotr spent most of the event at the openfpga assembly running the workshops with Clifford Wolf and Dave Shah. In between and during the workshops there was a continuing stream of people with questions about the FPGA tools, the hardware supported by them and the best ways to get started. If you have these types of questions the best places to ask are the ##openfpga and #yosys IRC channel on the freenode network as well as the iCEBreaker gitter channel. We are happy to answer your questions and get you into the fold. :) 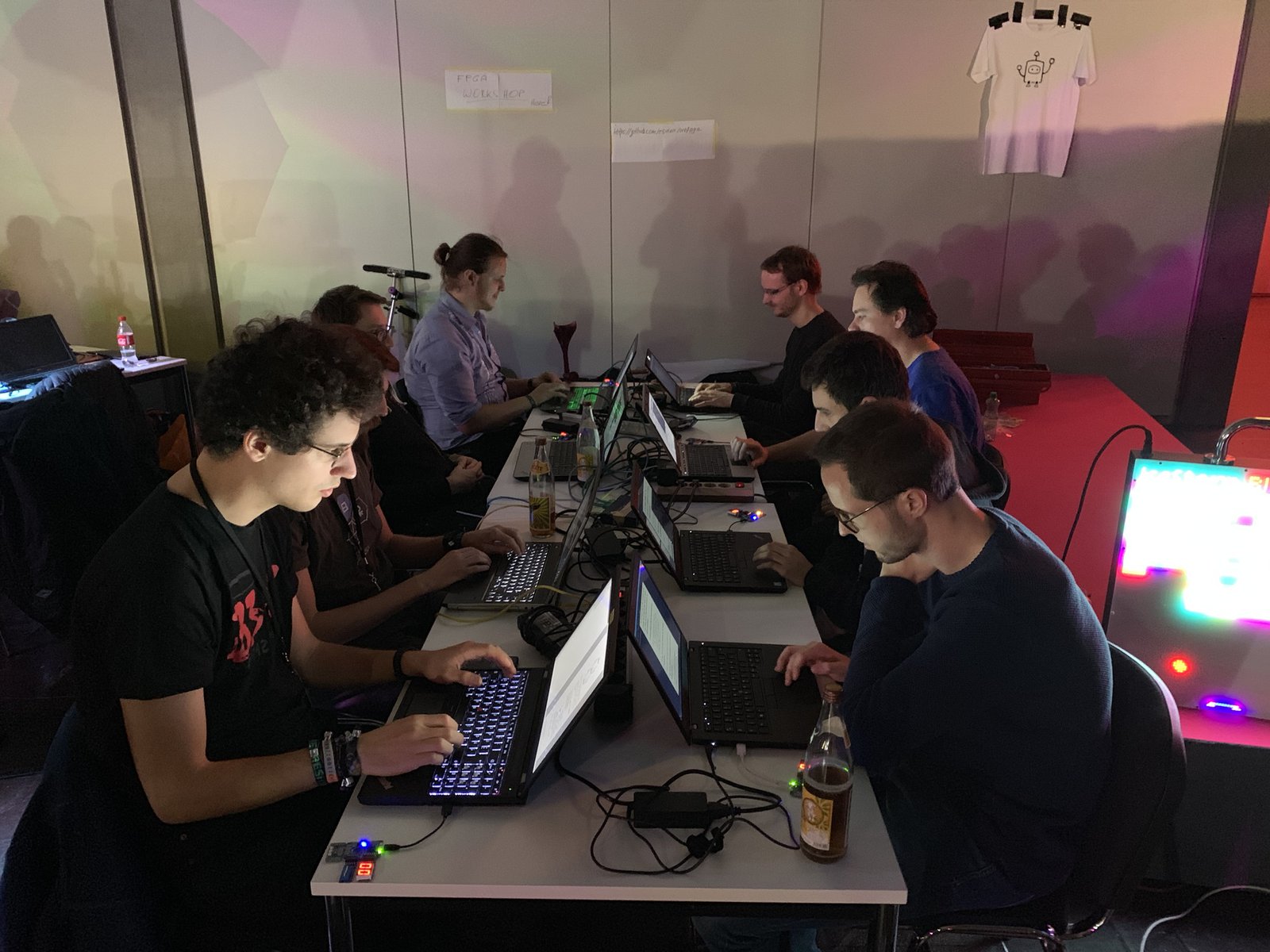 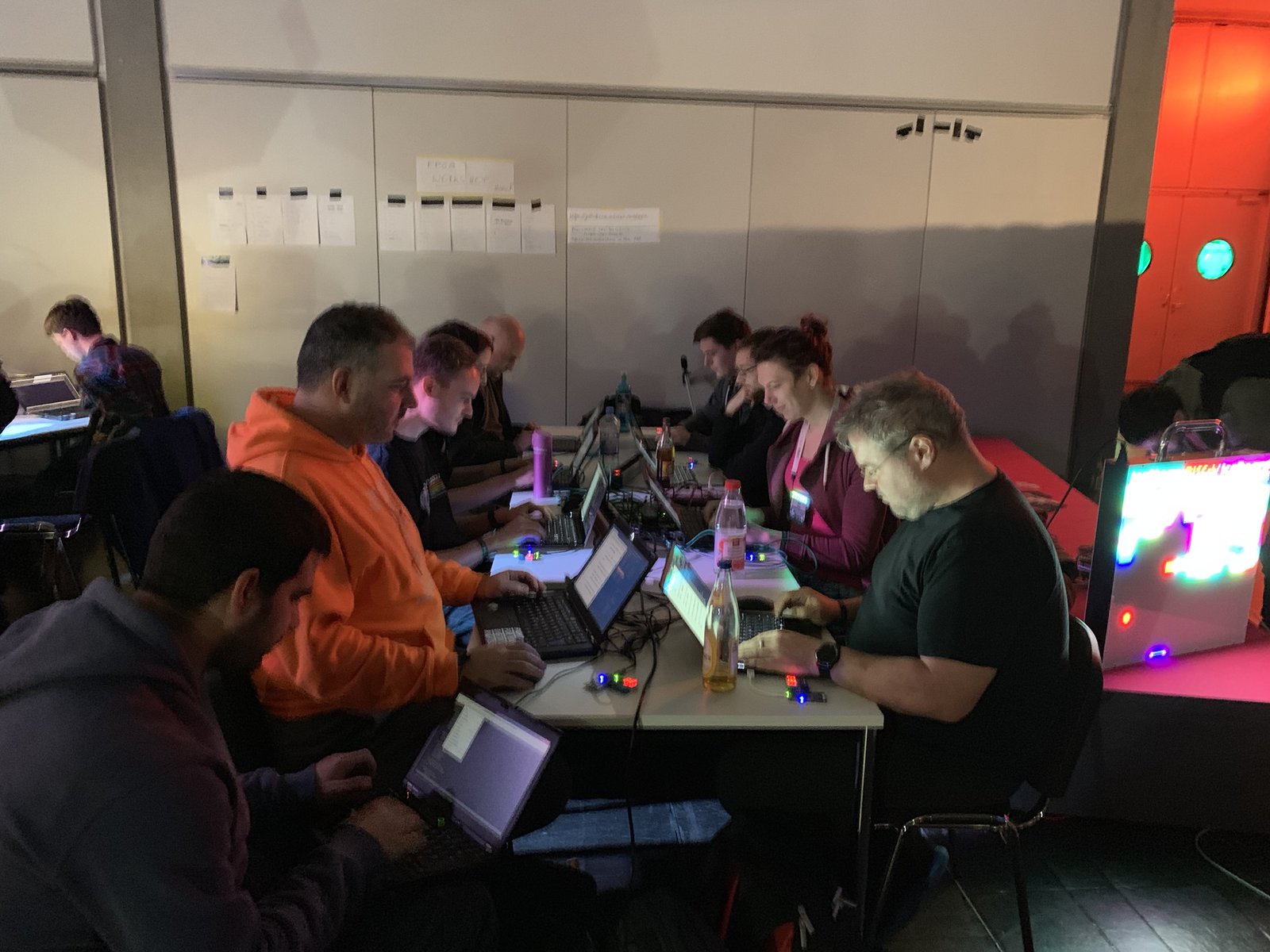 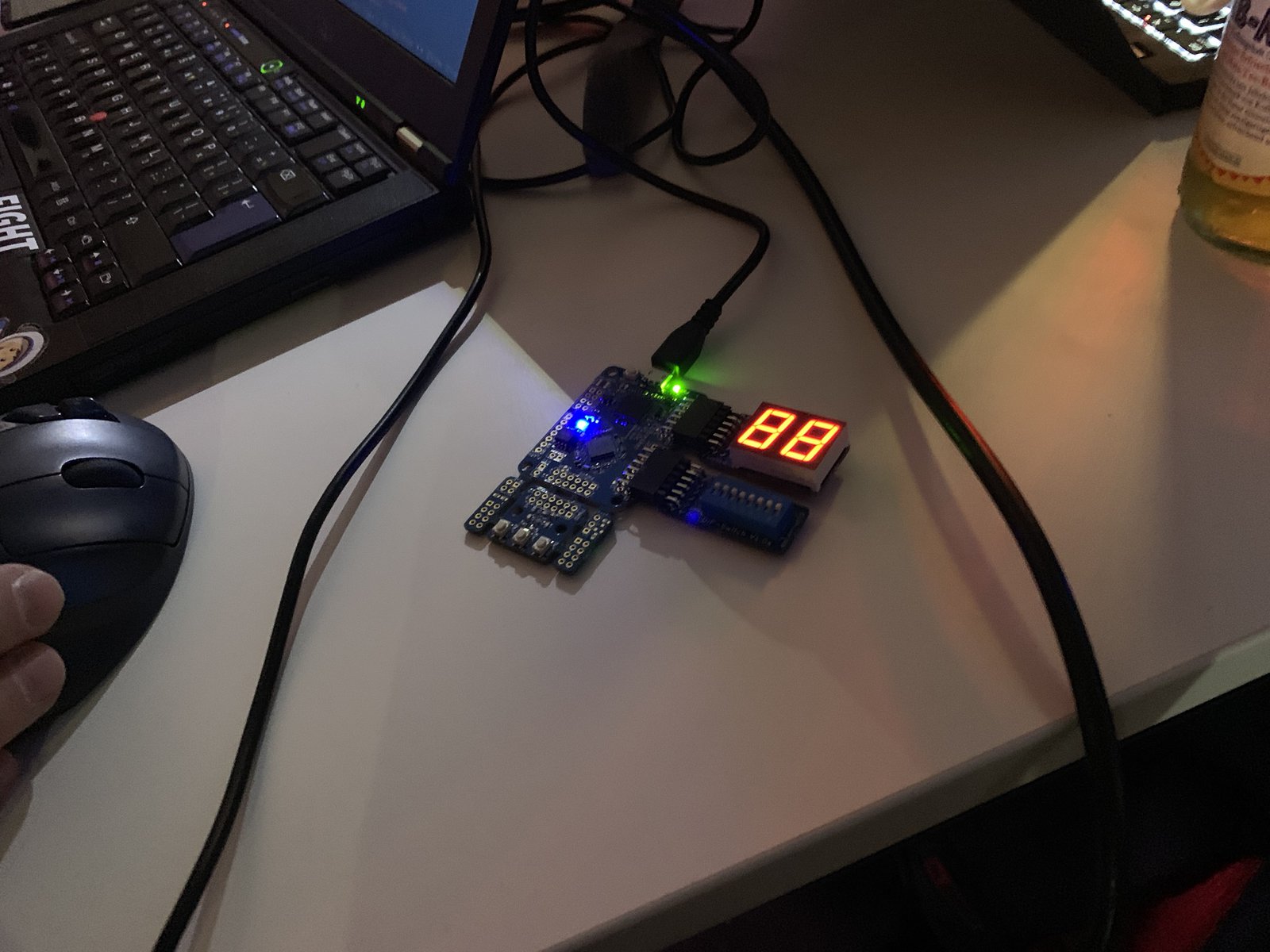 As you might know Piotr brought some of the pre-production iCEBreakers to the Congress. Similarly to the campaign we are overwhelmed with the amount of people that decided to get an iCEBreaker and want to use it to take their first steps into the world of digital logic design. Not a single iCEBreaker Piotr brought with him is coming back to the 1BitSquared HQ. Thanks to all the additional eyes looking at the board we found a minor mistake on the iCEBreaker V1.0c. The optional RGB LED footprint has the red and blue LED connections swapped.

This is a very small mistake on the board that we will fix in revision V1.0d. Unfortunately we already have the boards for the early bird backers so those of you who backed that tier will be getting the board with a small note describing the issue. But if you are an early bird backer and you would rather wait for V1.0c please drop us an email and we will send you the V1.0d as soon as we have them.

Now that the congress is over, Piotr is going back to visit with his family for another few days and he will be back at the office the second week of January. We will then put our full attention into starting production of the iCEBreakers and hopefully getting all of the rewards out to you in double time! :) 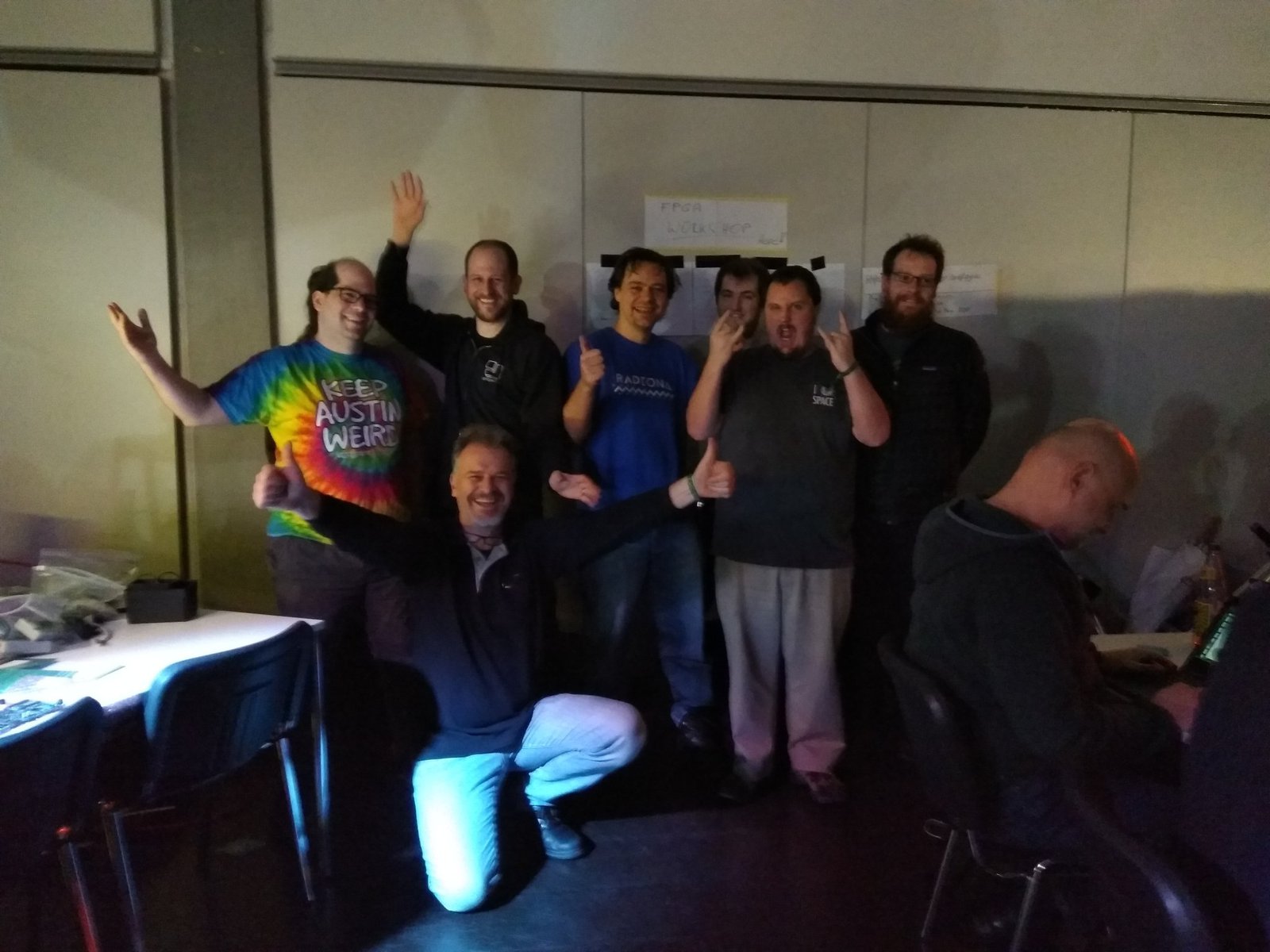 As you know the iCEBreaker can drive LED panel displays. One of the implementations by TNT allows for video playback on them. Piotr brought his 6 panel display, that was used during 35C3 to play back the live stream from one of the lecture halls. 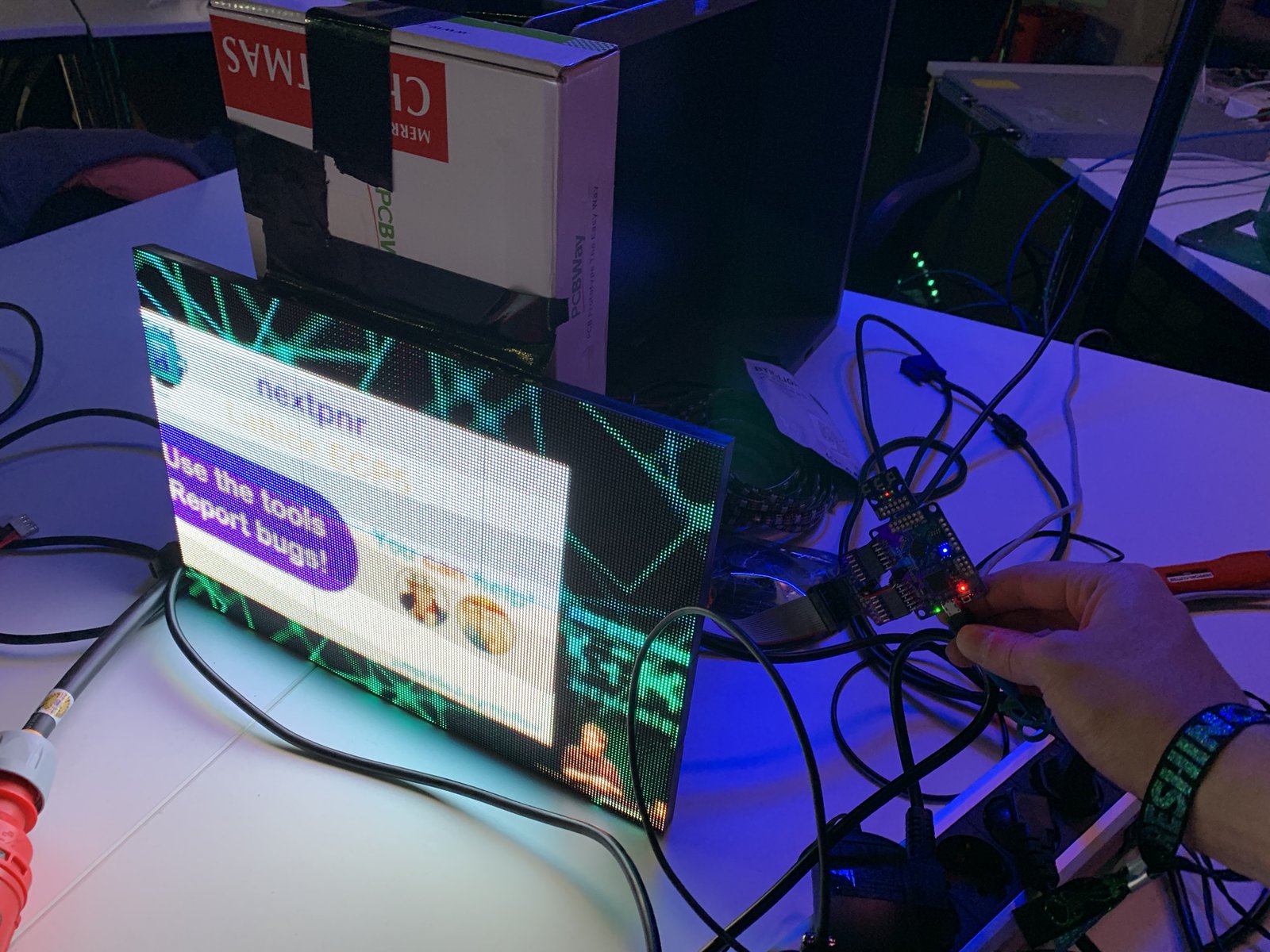 That is cool and all but not as cool as the huge display that vifino brought. It uses larger pitch LED panels, and more of them! It results in a 256x128 display. As vifino did not get his own driver board assembled on time Piotr was able to help him out with an iCEBreaker and LED panel driver Pmod. Vifino with TNT then brought up the display resulting in a mesmerizing show, playing demos contributed by a large group of people. The shinyblink sled animation collection is really pretty and pixel perfect. It is hard to describe how pretty it is, I hope you will have a chance to see it at some future event, maybe vifino will bring it to Chaos Camp, or you can build your own. ;)

Just before the congress MickMake received his iCEBreaker care package. He spent some time playing with it and was able to display video on the LED panel we sent him. You should check out his review as it is very entertaining. The video also includes some scary storm aftermath too, we are very happy that Mick and his family are safe and the storm only resulted in some material damage. Be safe Mick, and thank you for taking the time to play with the iCEBreaker! :)

While Piotr was at the 35C3, our friend Alex Glow from hacksterio received her iCEBreaker care package. She recorded a very entertaining video stream unboxing for the iCEBreaker. I hope you will have fun with the iCEBreaker Alex! Thank you for taking the time and we love your sticker wall on the side of your shelf in your workspace. ;)

That’s it for now

That is all for this update. We still have another week and a half of the campaign, so if you can, please spread the word.

We hope you all had an enjoyable holiday season and we wish you a very happy, healthy and successful 2019!