We have moved our project chat from Gitter to Discord. Join us! We know this might not work for everyone. Fortunately we still have our Discourse forum.

We are making good progress in production. Last month we manufactured enough iCEBreakers to fulfill the non LED panel tiers and all the needed LED panel driver Pmods to fulfill the rest of the campaign as well as a big portion of the 12-bit DVI Pmods. 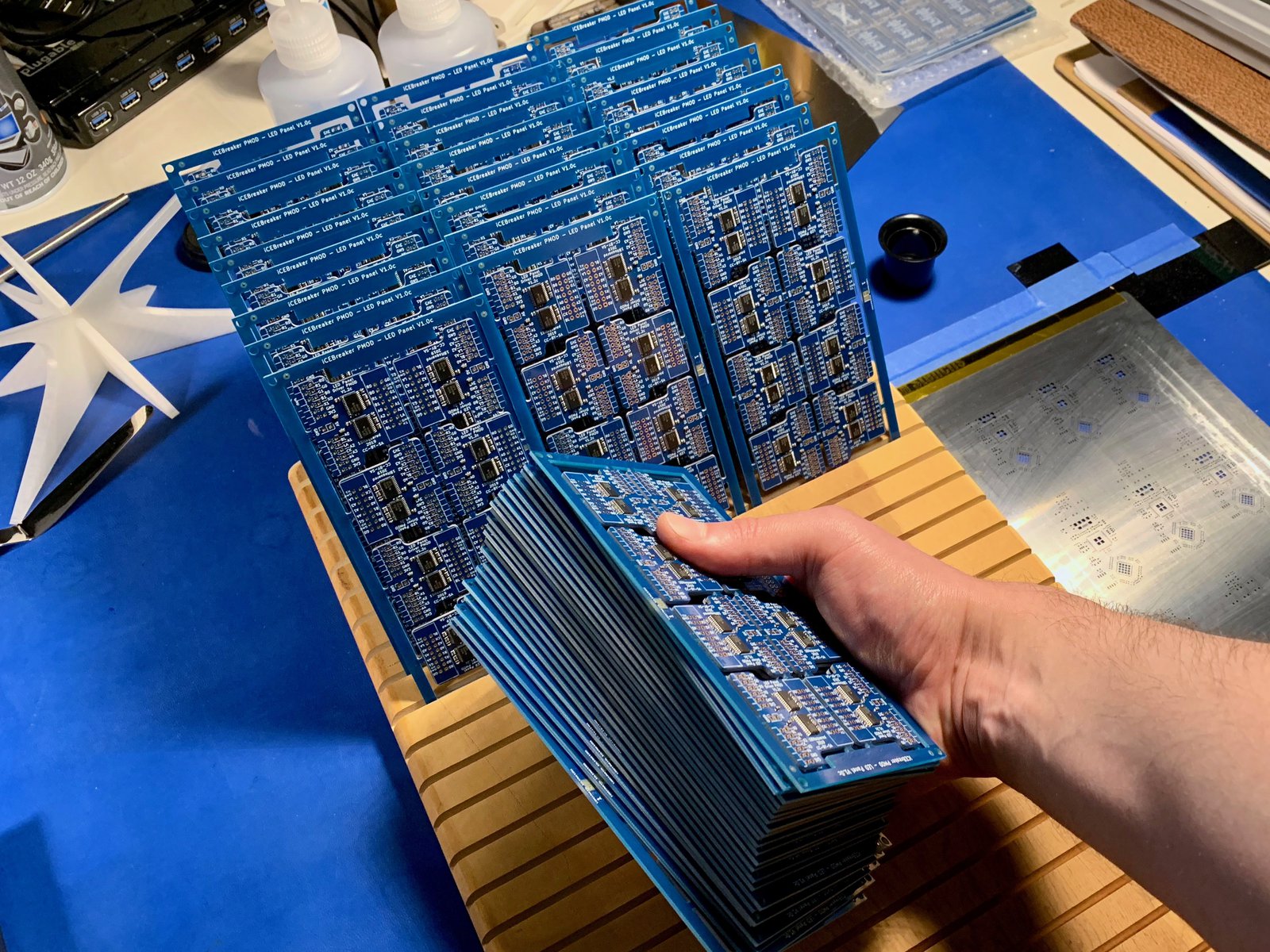 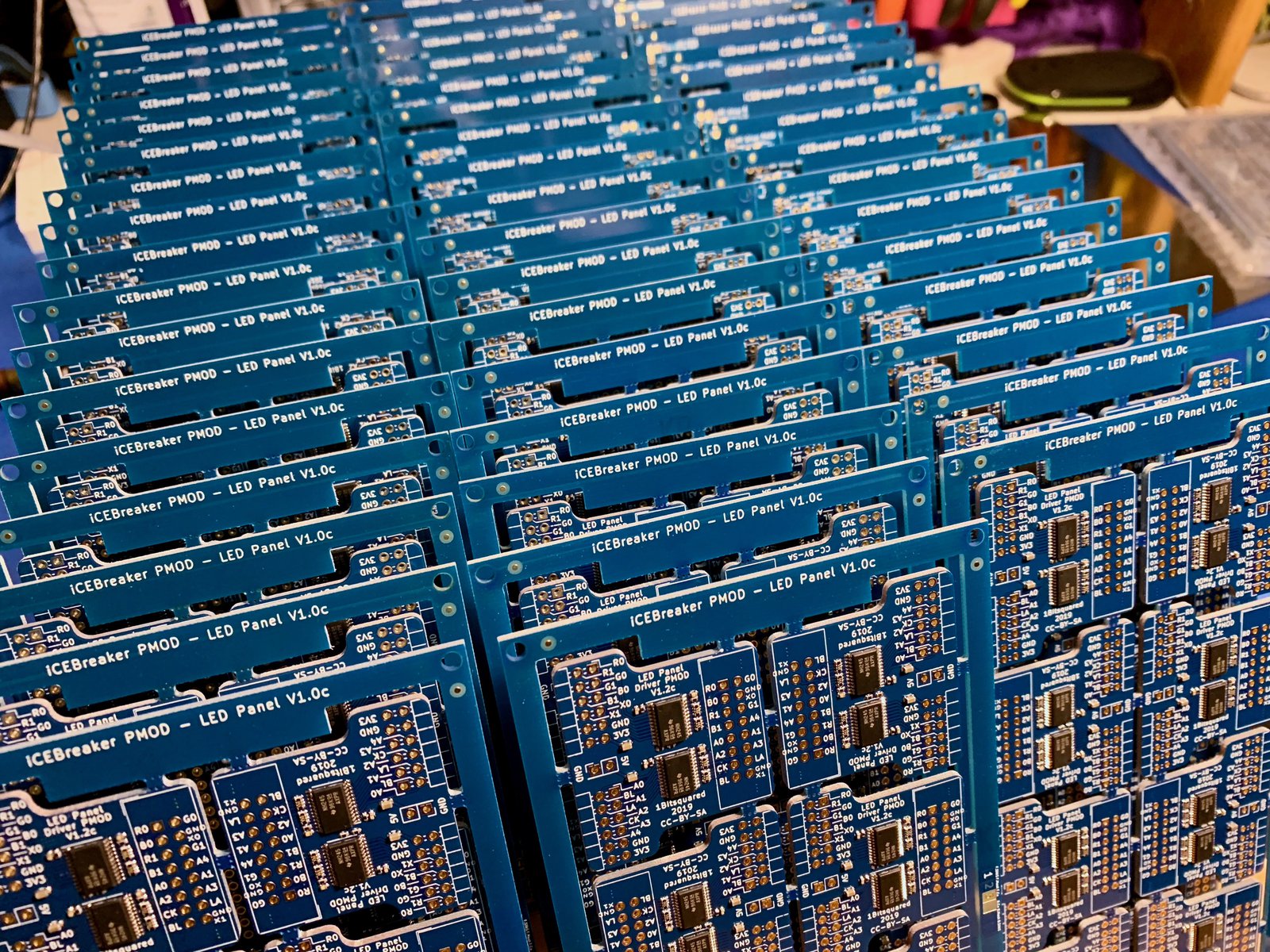 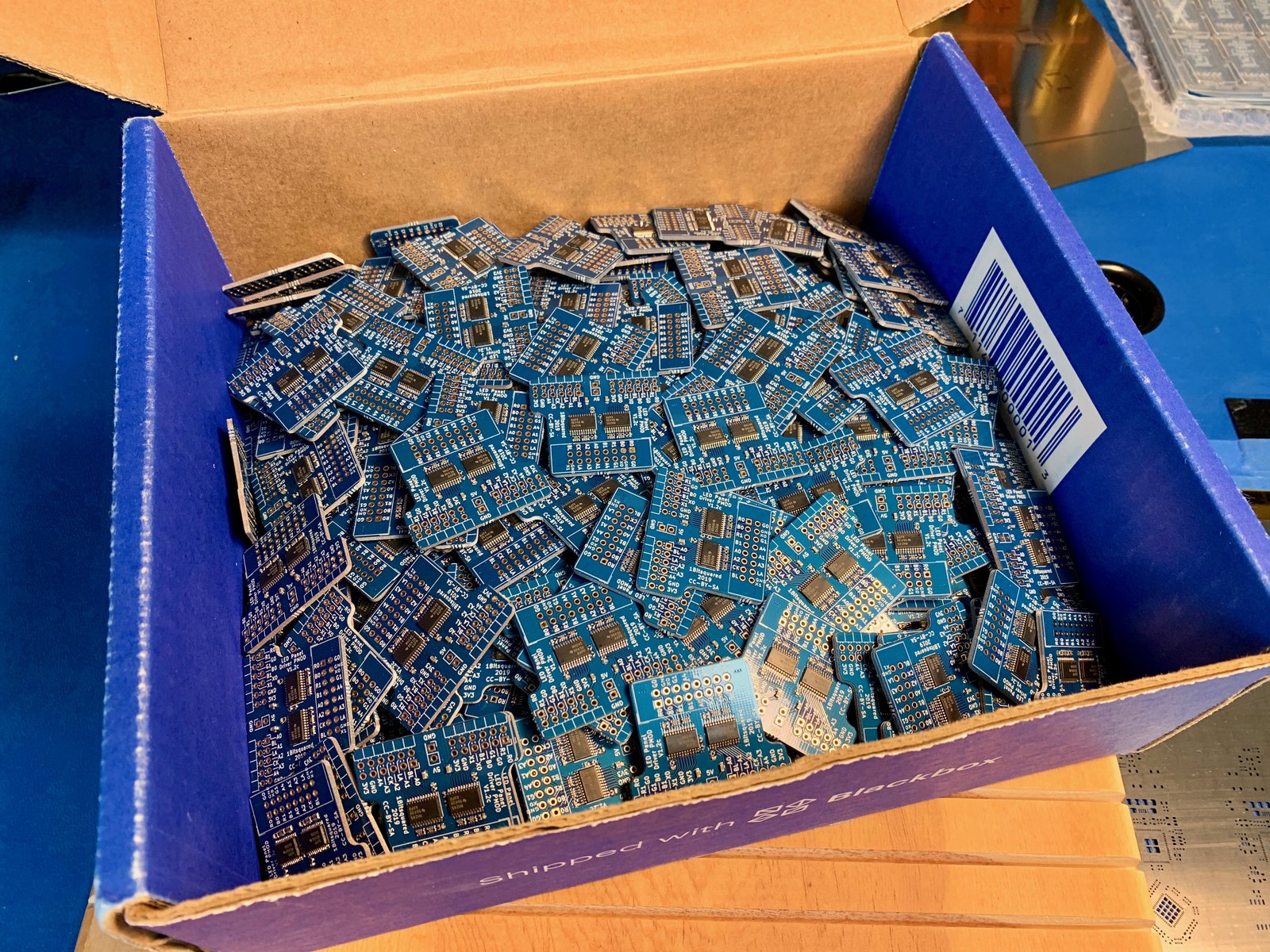 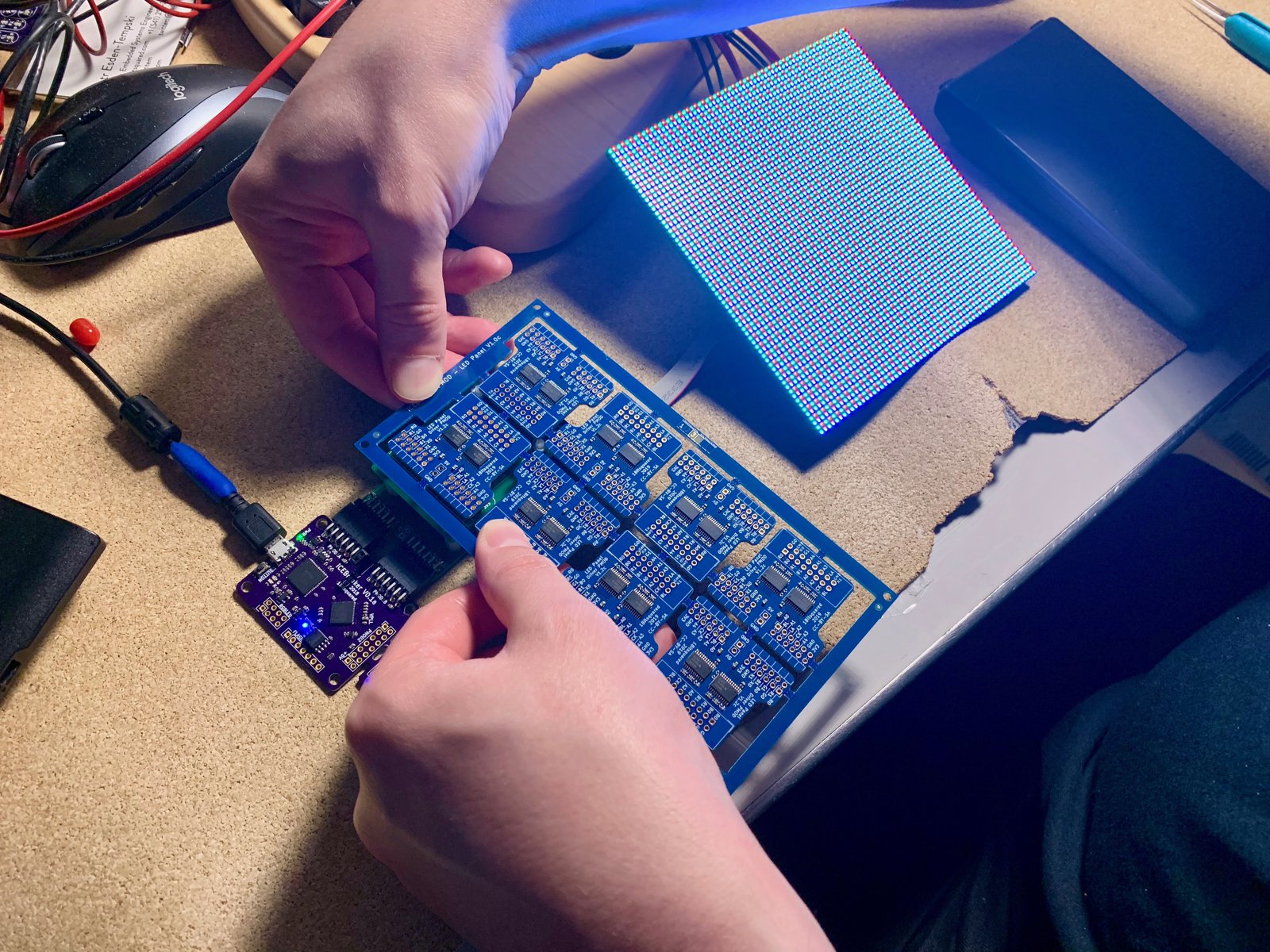 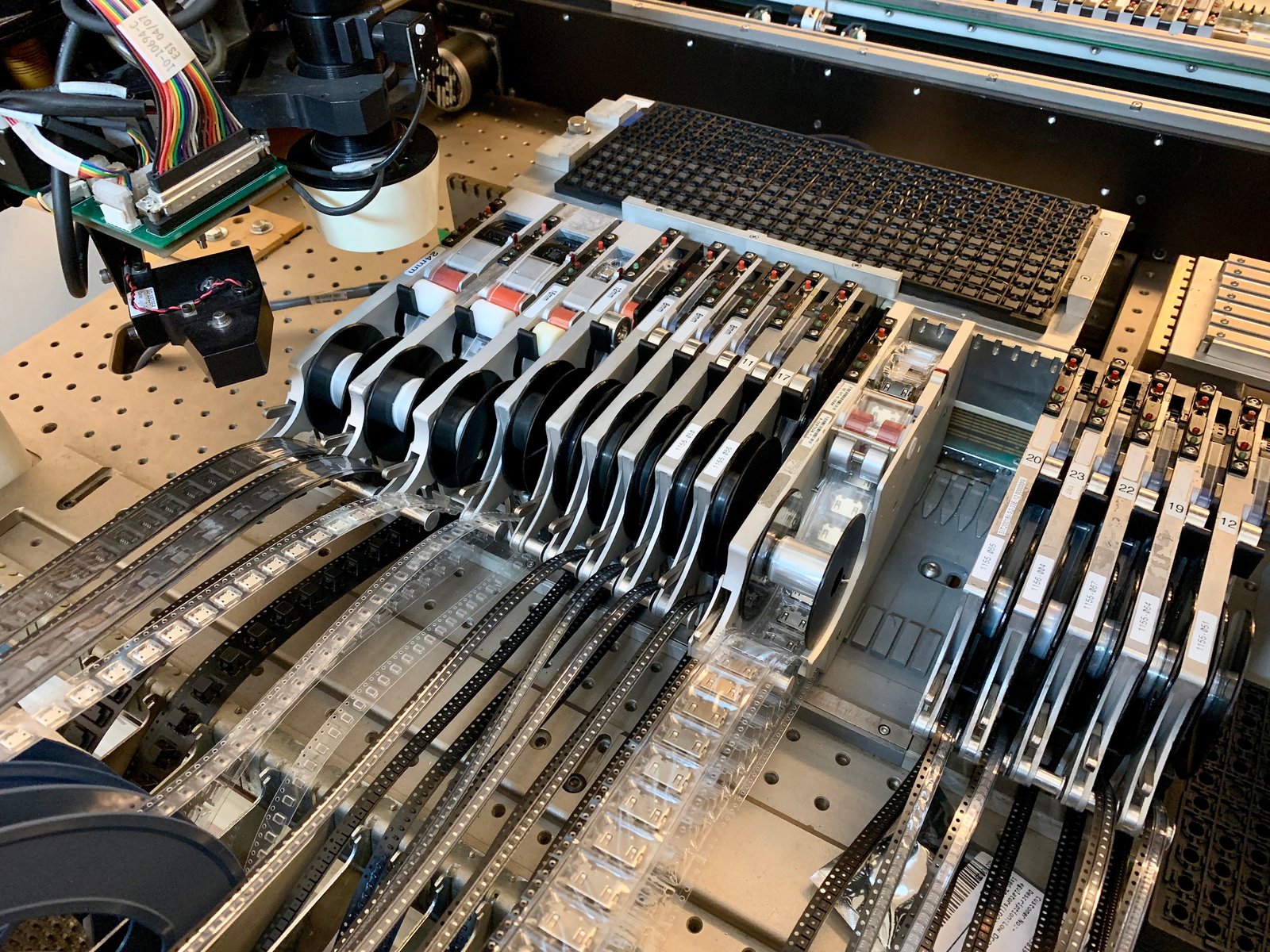 We have finally received the LED panels from China. We were pretty excited to see them delivered, and anxious to see if the manufacturer did everything we asked for. 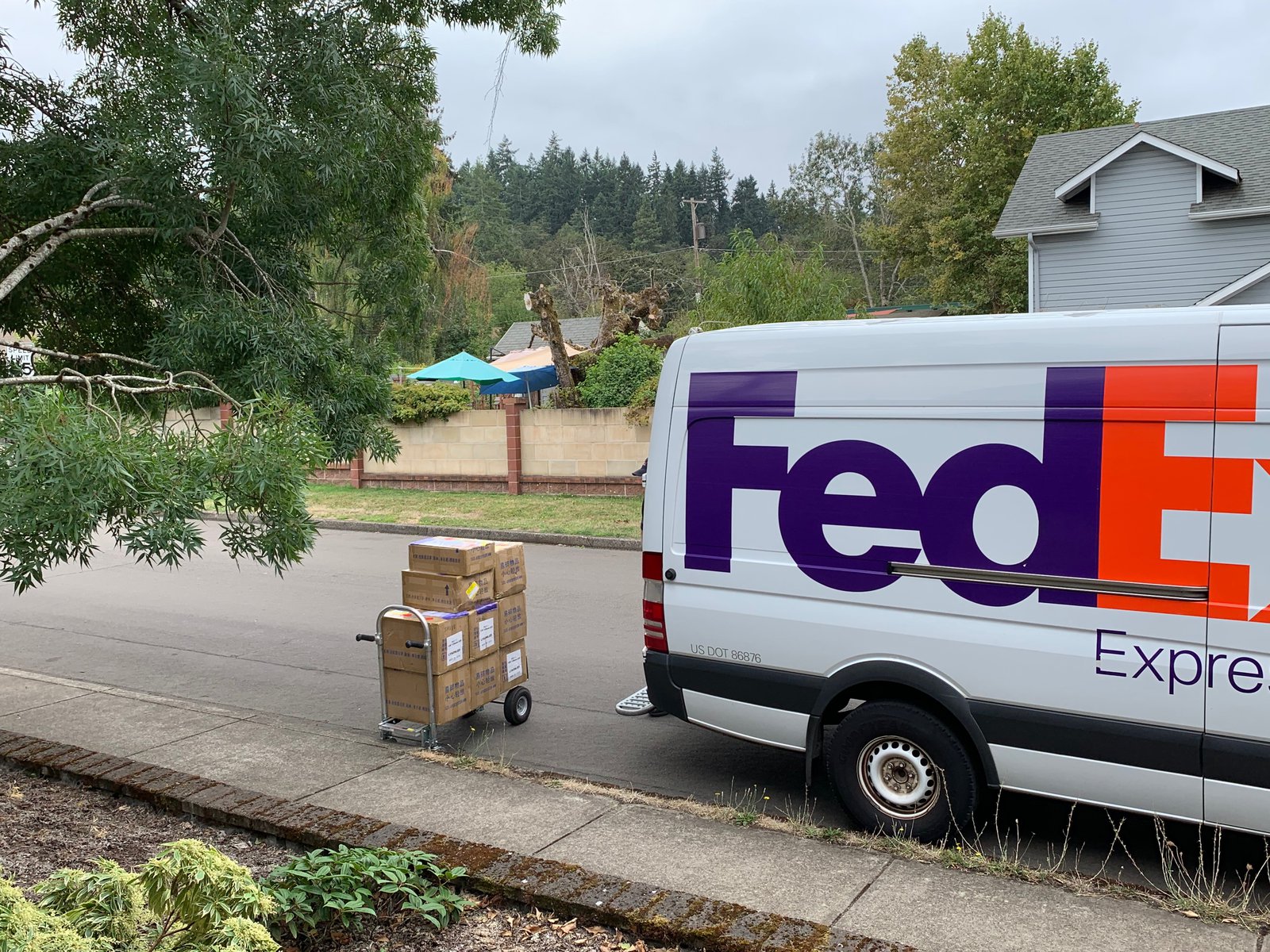 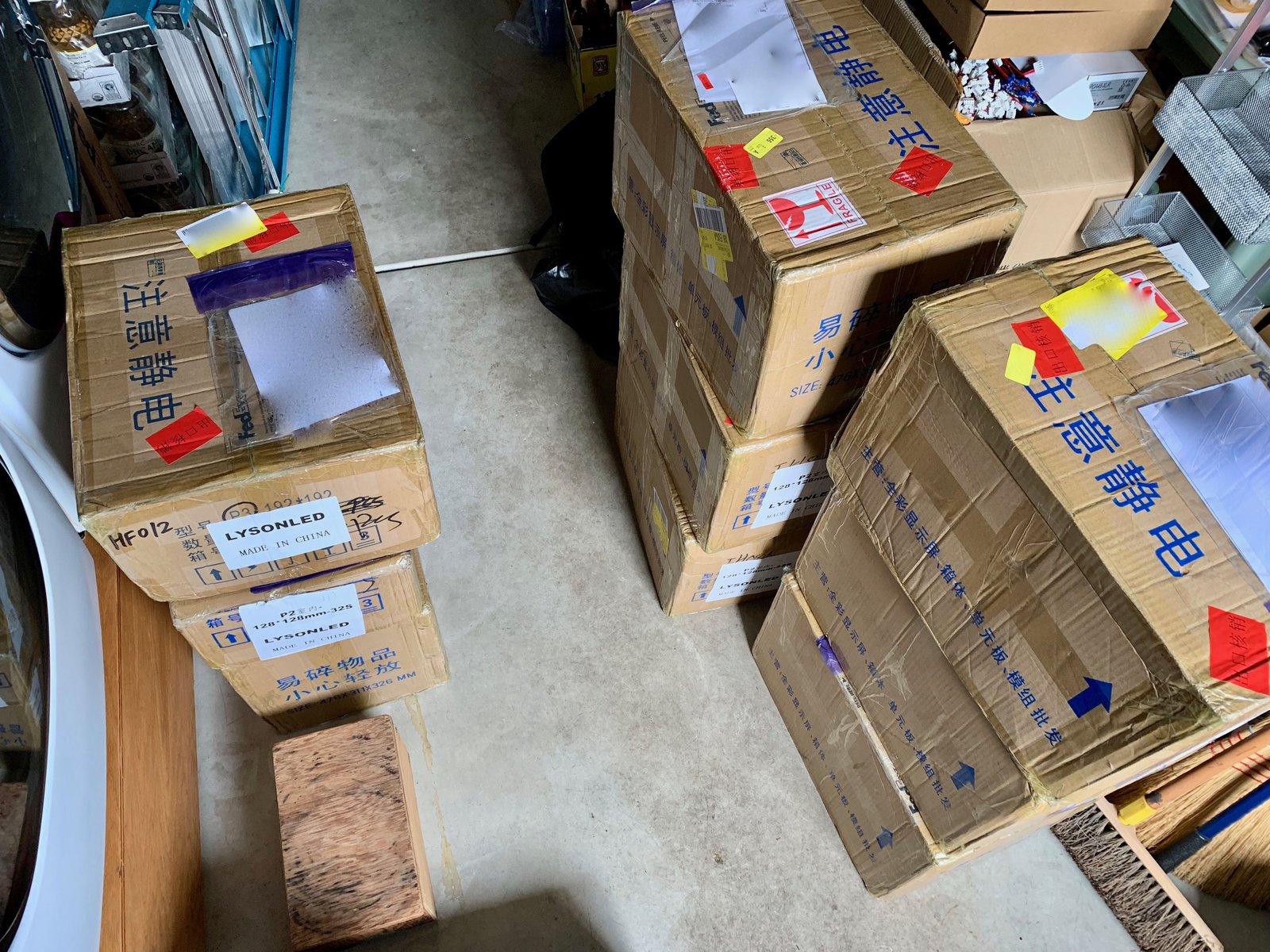 We have not tested all of the LED panels yet, but so far the ones we have tested seem to be working fine. There were some panels with minor issues that could be fixed quickly with some hot air and/or a soldering iron. As we have not tested all of the panels yet, we don’t know what the yield percentage will be and how much rework we will still have to do to the batch. 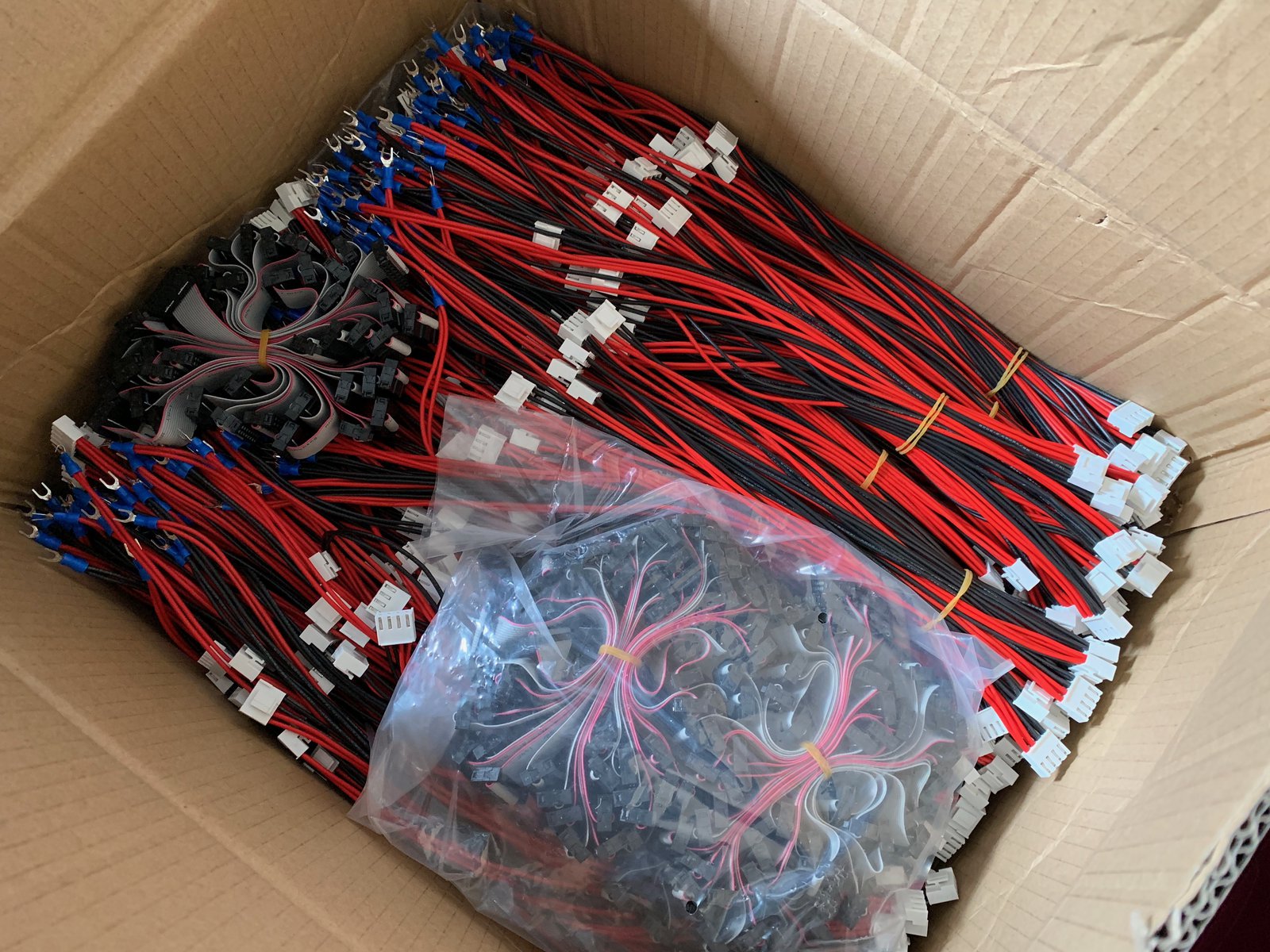 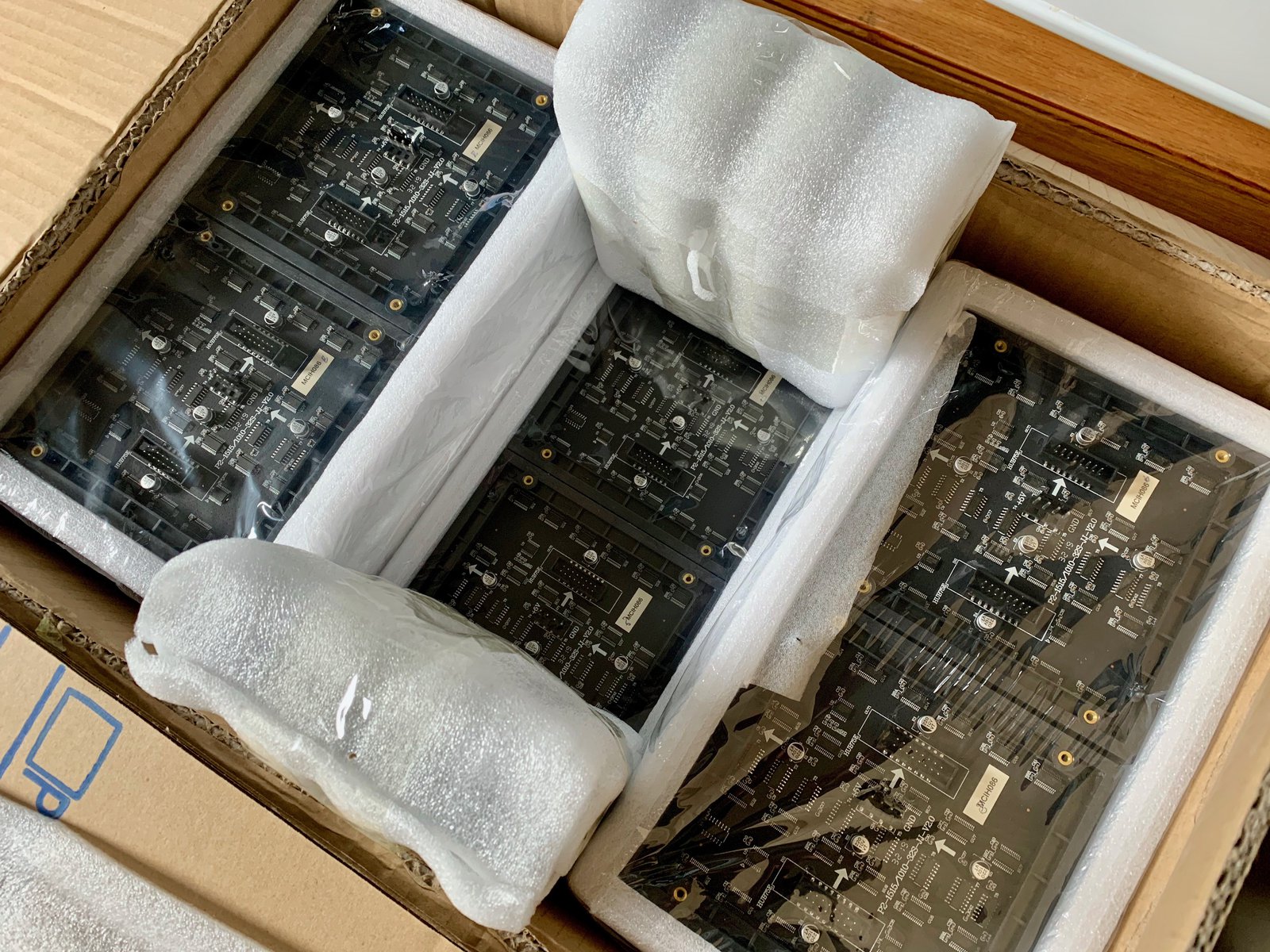 You might say, “did they not test the panels? Why are there any units in there that need rework?”. We have not found a way to keep the manufacturer accountable. When we asked them to make sure that all the panels they send us will be functional, they replied that “no-one in the industry would agree to such terms”. Considering the price of the panels and the fact that we did not want to keep delaying the LED panel shipment, we had to agree and just accept the fact that some of the panels will have issues, and that we’ll just have to fix them ourselves. 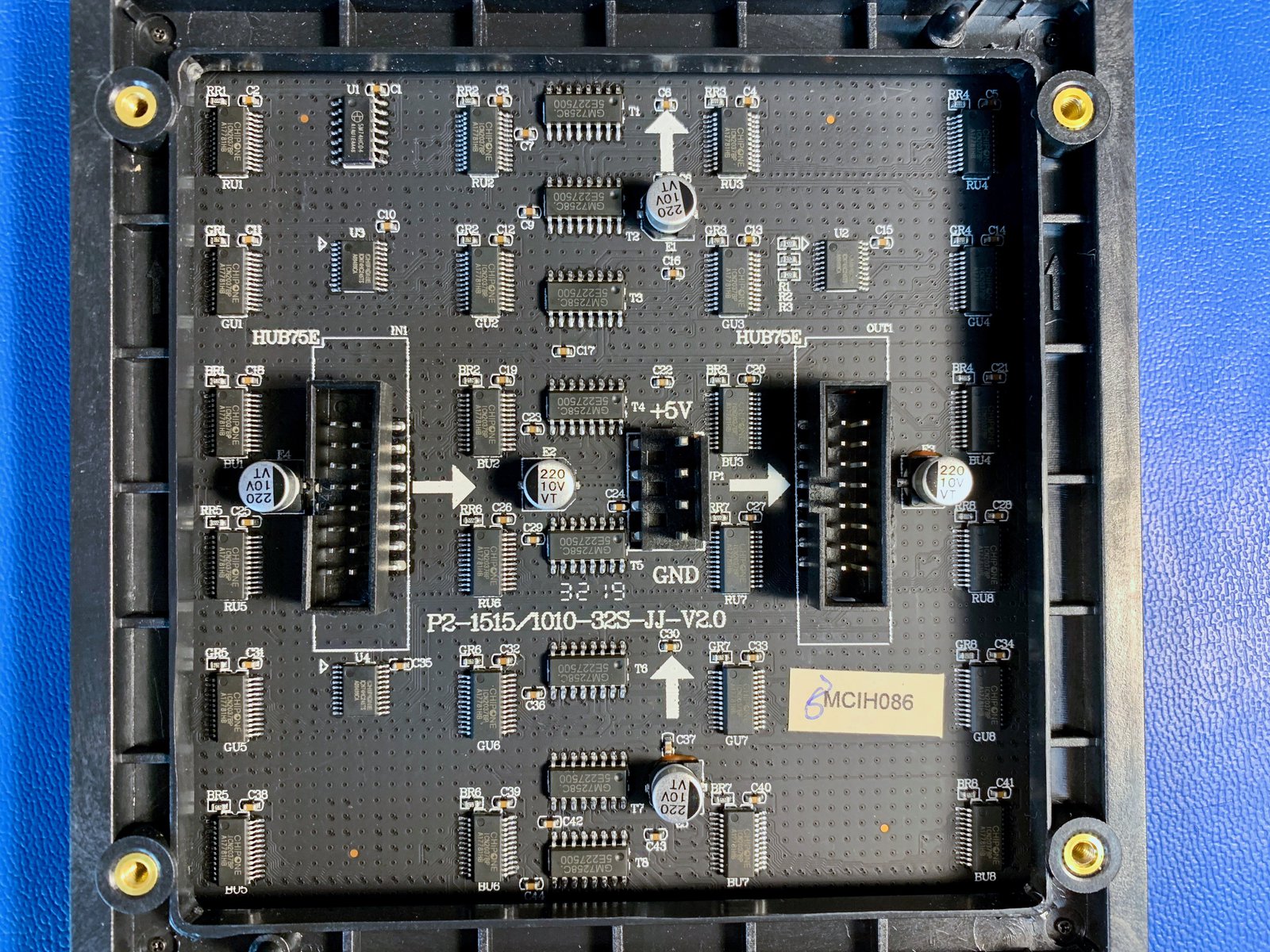 As a side-note, but I think it is important to point out: we were expecting that the LED panel shipment would be hit by the trade war tariffs and unfortunately we were correct. Soon after we received the LED panels, we got a bill for a 25% duty tax resulting in a $2,545.54 bill. Just in case anyone around you still believes that the tariffs are paid for by China, assure them that it is not the case, and it does affect people and small US businesses. I hope this information is useful to some of you. We will have to absorb that tariff payment this time, but for future campaigns and store sales we will have to take the cost into account and increase our prices accordingly. And as you might imagine, there is no reasonable alternative source for LED panels outside of China. 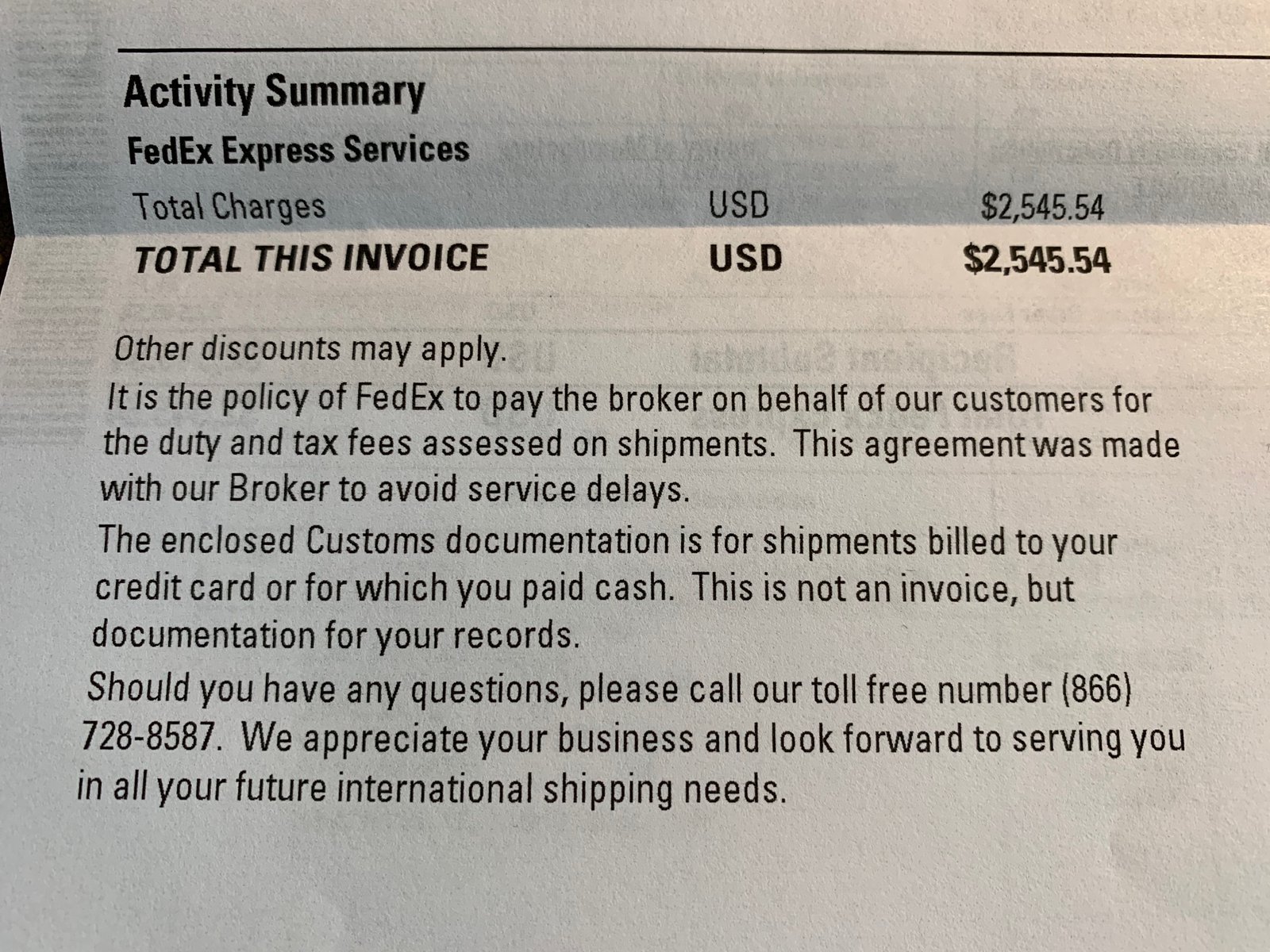 Campaign fulfillment is moving forward as we get more parts assembled. As we said already a few times in our updates, we were held up by the LED panels. So now that they are here, we are fulfilling your rewards as fast as we can make and test the remaining hardware.

Here are some pictures of hardware piles and envelopes for your entertainment. 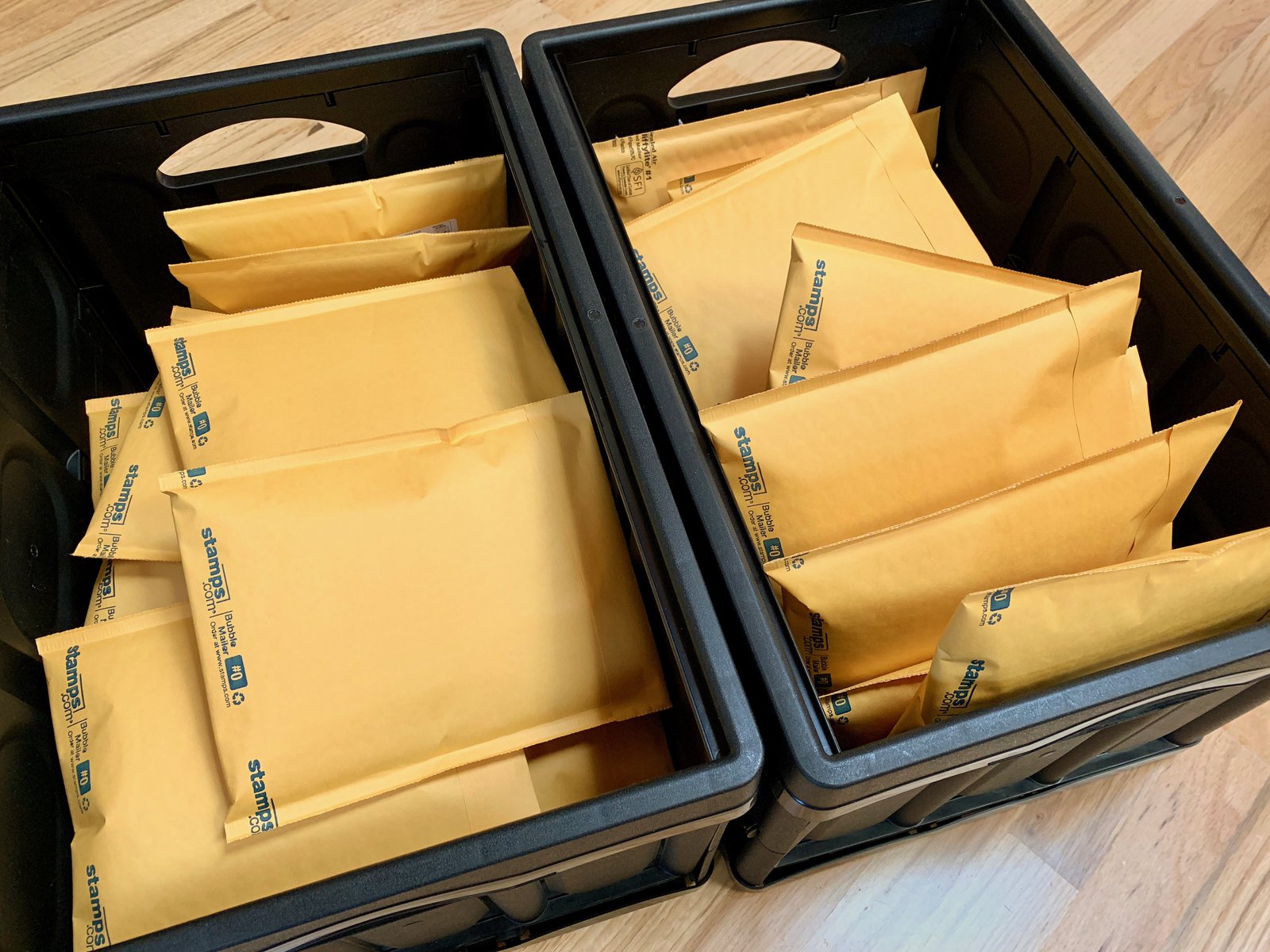 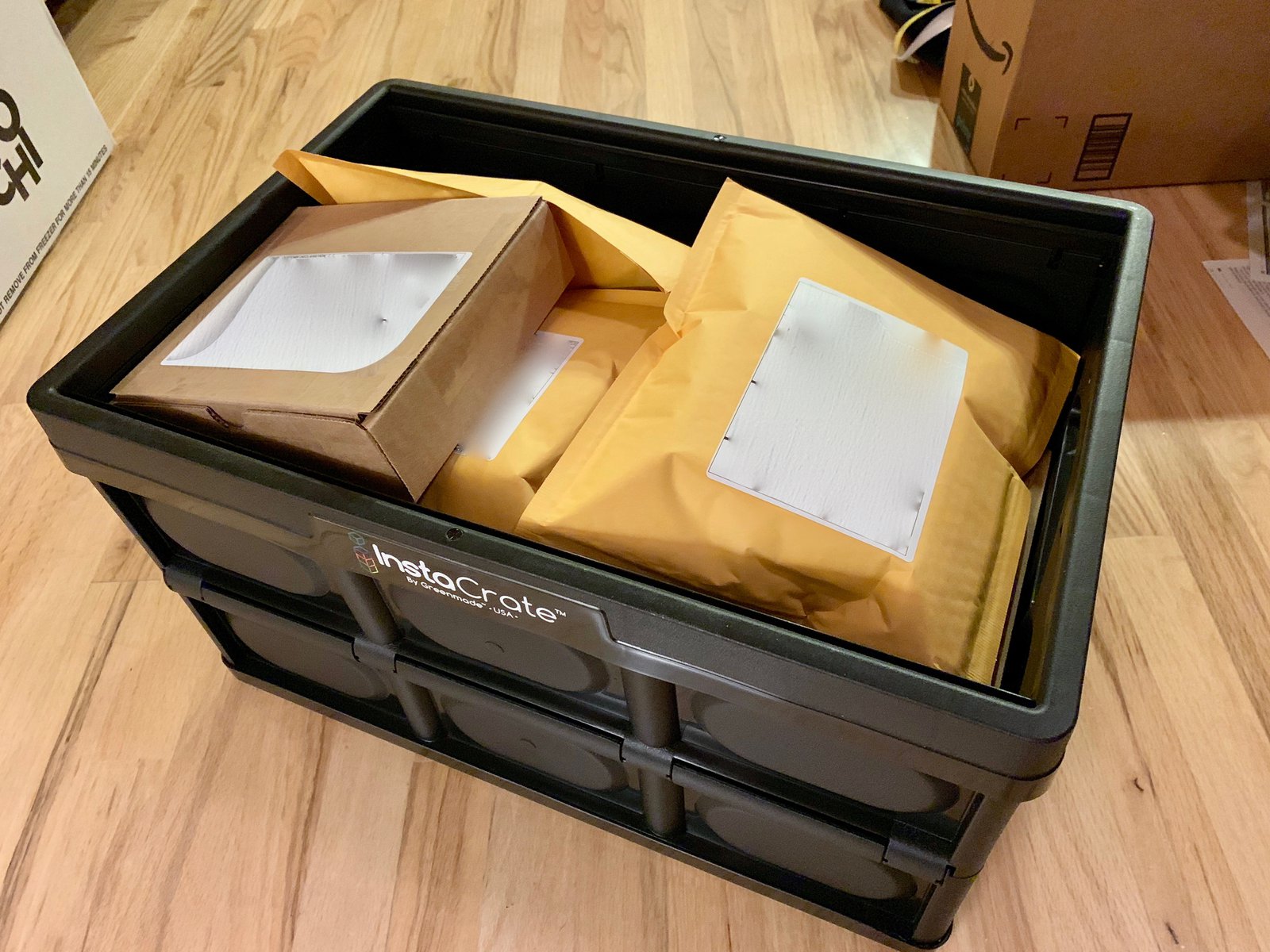 You should be getting a shipping confirmation for your campaign reward very soon. As always Piotr will keep sharing the manufacturing progress on Twitter and Mastodon.

Some of you might have already seen the news - we have decided to move our chat from Gitter to Discord. The reason why we decided to move, was based on feedback from our most active community members, as well as our conversation with the Gitter developers. We realized that the Gitter developer path into the future will not address the biggest issues we have with Gitter any time soon, if ever. To be fair to the Gitter devs, Gitter has a very small developer group of only two full time developers. Because of that, they made the decision to focus their energy on the part of the system that will benefit the biggest group of their users. This means they are completely ignoring desktop and phone client software and focusing their efforts on the web interface, adding new features and improving it’s integration with GitLab. Unfortunately, we keep getting reports from community members that they are missing messages, can’t post any pictures from their smartphones, and have stability problems with the dedicated clients. Not everyone wants to have to use their computer and keep a tab open in their browser over using a dedicated client, even if it’s just an Electron app. This recurring theme resulted in us rethinking our plan forward.

We have talked to multiple people that coordinate communities (Adafruit, BoldportClub, Keyboardio, KiCon, Robohemian, Unexpected Maker, usb-tools) and came to the conclusion that we will be able to serve the biggest cross section of you all, by moving our chats over from Gitter to Discord. We are aware that there will always be a few people that will not like that decision for one reason or another. If you are one of them, we are very sorry. Unfortunately there is never an ideal solution that will work for everyone. Fortunately we also have the Discourse forum that you can use to share your projects and interact with the community.

That said, join us on Discord and check out all the different project chats. As always, we are very curious to see what you are building using the hardware we make.

That would be it for this update. Talk to you soon!