Campaign production is complete! All campaign orders shipped to Crowd Supply last week, while pre-orders are shipping this week. You should be receiving your Programmable USB Hub ahead of schedule! You’ll receive a tracking number by email when your order ships, and you can double-check your shipping address in your Crowd Supply account.

Thank you again for your order, and we look forward to seeing the Programmable USB Hub out in the wild!

This is how the assembly and testing bench looked mid-production: 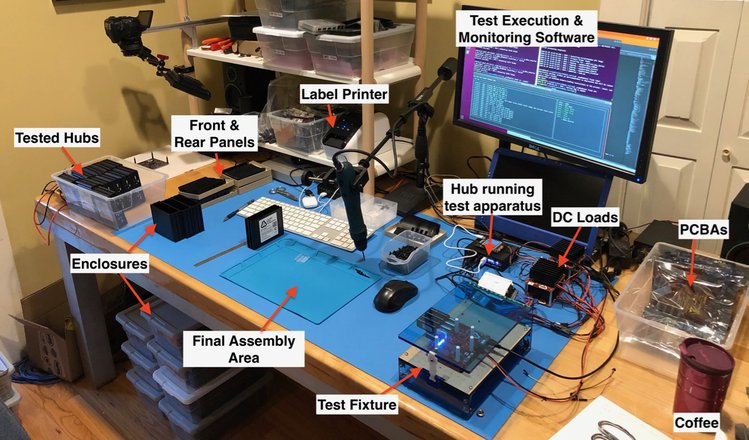 Each Programmable USB Hub goes through the following set of tests:

It turned out the code that runs all of these tests is larger than the combination of the Programmable USB Hub Host Driver & Device Firmware.

The programming & test fixture consists of:

Also, the Host Side Driver is now available thru PyPi.

This means that driver installation is as simple as:

The command-line tool (usbhub) allows you to:

Note that the host-side driver is entirely optional. Your Hub will function as a 4-port USB Hub and as a USB-to-UART converter without any drivers.

Capable Robot Components enables rapid development of autonomous robots by providing technological building blocks to system integrators. Right now, integrators have to develop things they would rather purchase because the right robot-first products don't currently exist. CRC provides proven products which are domain-agnostic, but configurable and adaptable to the integrator's market needs. This allows autonomous system developers to spend more time and effort on domain-specific engineering and testing.