"The programmer, the hacker's USB hub."

Programmable USB Hub is part of the Microchip Get Launched design competition!

In addition to being a 4-port USB 2 High-Speed hub, this Programmable USB hub is also:

The rear of the enclosure exposes the upstream USB connection and a USB port to re-program and communicate with the internal MCU. Also exposed are two I²C buses (via Sparkfun Qwiic connectors), the Programmable USB hub’s UART, and 2x GPIO. Input power is provided to the hub by a locking Molex connector. 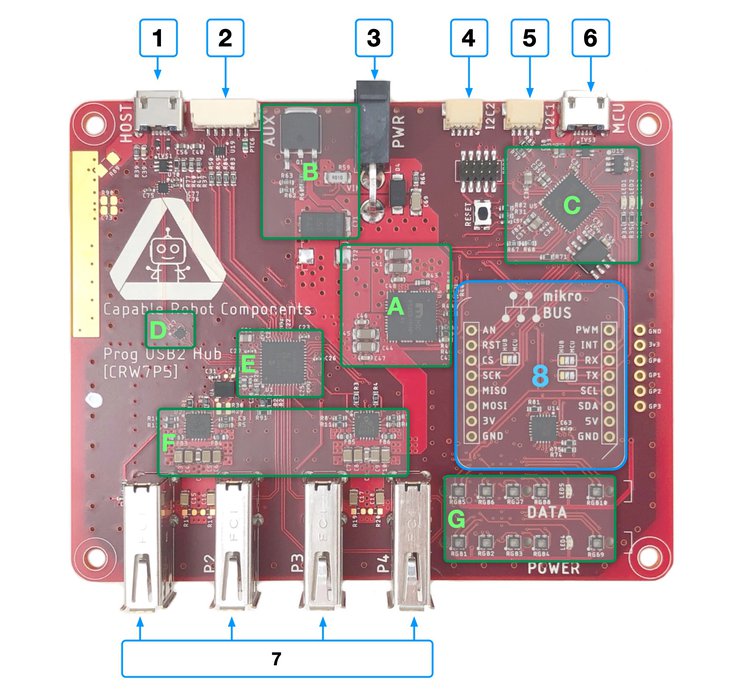 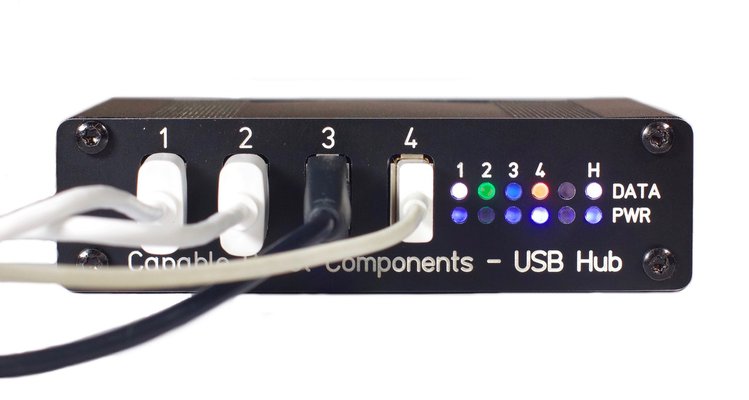 With the default firmware behavior, the Data LEDs show per-port data state with the following meaning:

Likewise, the Power LEDs show per-port power draw in blue, with higher port power displayed as a brighter blue. Ports which have power turned off are lit orange and any over-current condition is shown by lighting the LED red.

The CircuitPython firmware is easy to modify to change how these RGB LEDs display Hub state.

The Programmable USB Hub is proudly open source. You can use MIT-licensed Python drivers to control and monitor your USB Hub the way you want to. The Hub can be easily integrated into hardware-in-the-loop (HITL) test systems and its’ in-built IO expansion allows the Hub itself to control or stimulate the Device Under Test (DUT). You can also automate testing of embedded USB devices - simulating USB unplug events and unexpected loss of USB power. Use the upstream USB port or the MCU USB port to control and monitor the USB hub.

An ATSAMD51 microcontroller configures the USB Hub IC and is available for you to reprogram to change the behavior of your hub. The microcontroller ships with open source CircuitPython firmware, which is updatable over the MCU USB connector. No drivers or reflashing hardware is needed — Python firmware shows up as files on a small flash hard drive when connected to your computer and code can be immediately edited. 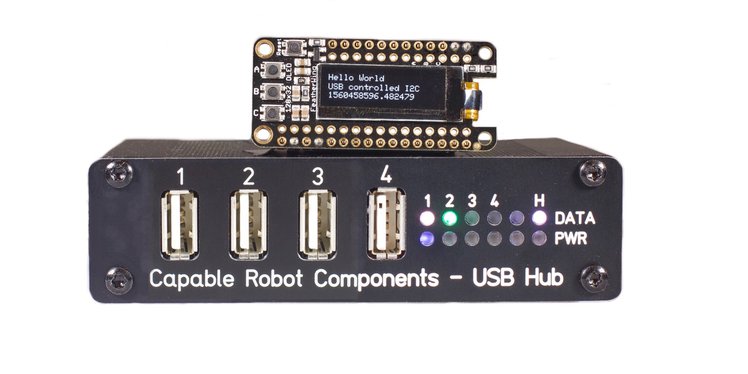 Here, CircuitPython software running on the upstream Mac OS Host (not the internal MCU) is controlling this OLED display, which is attached to the Hub via the rear Qwiic I²C port. The Driver Repository includes a Bridge, allowing unmodified CircuitPython libraries to run on Mac OS, Linux, & Windows and communicate with devices attached to the Hub.

Alternatively, the MCU’s CircuitPython firmware can be modified to communicate with external sensors or devices to create automatic behaviors which do not require host driver control. 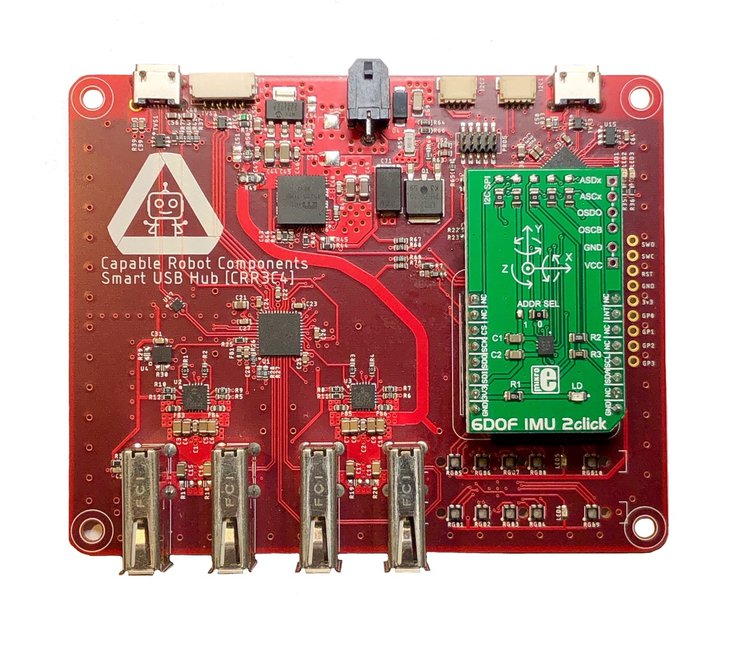 Here, an IMU board has been installed into the mikroBUS port and the built-in CircuitPython firmware changed to detect and respond to tap events.

How the Hub responds to these events is up to you, instead of displaying text on the OLED screen, the hub could:

The Programmable USB Hub is designed to be durable and robust. The OEM version (board only) has corner mounting holes for easy integration into a custom enclosure. The Micro-USB connectors are reinforced, and the IO is protected from ESD strikes (exact specification TBD).

Currently, there are two GitHub repositories which have relevant software and documentation for the USB Hub.

Please open a GitHub issue if you have a suggestion for the product or run into any problems using it, or use the “Ask a Question” link below.

If you have a question about ordering, paying, or shipping, please refer to The Crowd Supply Guide.

Capable Robot Components enables rapid development of autonomous robots by providing technological building blocks to system integrators. Right now, integrators have to develop things they would rather purchase because the right robot-first products don't currently exist. CRC provides proven products which are domain-agnostic, but configurable and adaptable to the integrator's market needs. This allows autonomous system developers to spend more time and effort on domain-specific engineering and testing.