I wanted to reach out and give an update specifically on the iPad version of A Weather Walked In. For those of you who didn’t purchase the iPad book, bear with me on the the iPad news for a bit more news and a special thanks.

The short story with the iPad version of AWWI is that we were ready to publish it in May before I missed a crucial deadline with our software provider, which would have cost me $6,000 in licensing fees (which I didn’t have). I went back to the drawing board, and ended up troubleshooting my issues with a Portland app design agency called StoryCode. They helped restart the process of producing the iPad book through Apple’s iBook Author software. In short, I had to redesign and restart the entire iPad book from scratch for the new software. Currently, the final version of the book has been proofed and is ready to be put up for download. I’m ironing out legal and tax things with iTunes, so the book will be available to you all very soon. For those of you who pre-ordered the iPad book, we’ll send you a download code soon. It’s looking really good, and I’m excited to bring it to you all!

The other thing I wanted to mention to everyone who backed the print book and iPad book project is that I am so eternally grateful for your support. The journey to publishing Charlie’s photo collection has been at times difficult and stressful, but ultimately rewarding in so many ways. These photos now live on for future generations to see and digest, photos that came from a time that was difficult and emotional and ultimately a very sad period for the United States.

With your collective support, we have been able to preserve this historic and beautiful document of that time and place, and we’ve been able to connect with people—and families of people—from the photographs, and I cannot express enough how grateful I am to all of you for supporting this. The emotional reward in this project is overwhelming.

With that, I wanted to share a story with you. Last month, Charlie and I unearthed hundreds of slide photos from his time in Vietnam, which, like his negatives, had never been seen before and had lay in storage for years. I’ve been taking some time to sort through them and get a feel for the content, and I found the following slide, the edge of which read (in Charlie’s familiar handwriting) "JUN68 GENE HANDRAHAN (KILLED)". I did some research and found this (see original post here): 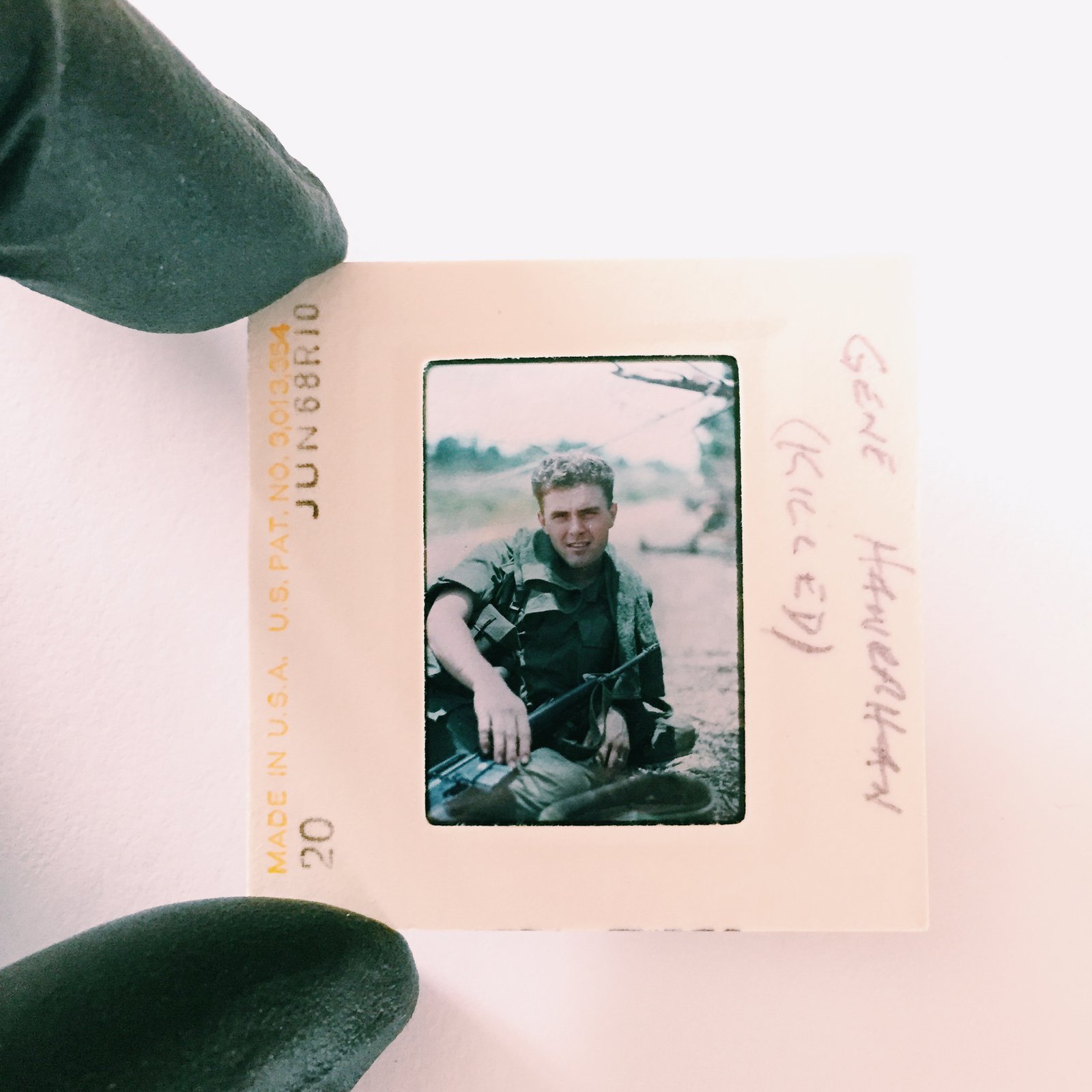 Eugene Handrahan was drafted in November, 1967. He considered going to Canada, but that just wasn’t the way things were done in his midwestern family. After boot camp, he returned home to be married, and shipped out to Vietnam on April 25, 1968.

Gene was a foot soldier and carried a grenade launcher for Company A, 2nd Battalion, 12th Infantry. On October 10, SP4 Handrahan and his squad were setting up an ambush on an enemy position about 50 miles northwest of Saigon and two miles from the Cambodian border. Company A was about to enter a hedge row when a machine gun opened up on the squad. Gene was the left point flank man. During the initial burst of fire, Gene yelled that he had been hit, but after one buddy was killed trying to reach him, the squad was ordered back while the area was bombed. Two other men had also been hit in

the initial fire. The other two men were under constant observation by command and control helicopters, although nothing could be seen of SP4 Handrahan. Enemy fire prevented the three from being evacuated, although repeated attempts were made to do so.

Late in the day, the officer in command determined that all three men were dead and called in an air strike and artillery fire on the enemy position in the hedge row. The next day, the bodies of the other two men were recovered, but SP4 Handrahan was not located.

At Handrahan’s last known location, a large bomb crater was found. Digging into the edges of the crater failed to reveal any evidence of remains. No leads were ever found on his fate from area residents.

A later report indicated that the bodies of American soldiers had been placed in a well in the vicinity. This report was thought to possibly correlate with the Handrahan incident.

Gene’s family was told by other team members that they could hear Gene yelling for help throughout the night, that he was wounded and could not move. The team members found a "spider hole" close to where he was, and believed it was probable that he had been pulled into the hole.

For many years, the Vietnamese have developed complex tunnel systems in many parts of the country. The tunnels served them well in war with the French, and again when the U.S. was involved in the Vietnam war. Veterans speak of concealed entrances over tunnel complexes so vast that entire hospitals and large supply stores were found. It was possible to exist indefinitely in the system and travel for fairly lengthy distances without ever leaving the underground. It was not uncommon for Americans to occupy the topside, only to later discover that the enemy was numerous beneath them.

It is hard to imagine the agony felt by both Gene and his listening team members through the night. It is impossible to imagine how difficult it must have been for the officer in command to call in air strikes on this position. When a man is sent to war he anticipates being wounded or even killed; and perhaps being captured. The thought that he might be abandoned, wounded and alone, probably never occurred to Gene Handrahan.

Nearly 10,000 reports have been received by the U.S. Government concerning Americans still missing in Southeast Asia. Many authorities believe there are hundreds still alive. Gene Handrahan’s family believes many are alive, waiting for their country to rescue them. They don’t know whether to pray Gene is one of them, or that he died without ever having to learn that the country he so proudly served had abandoned him.

I’ll be very candid here and say that I read this text, and it made me cry. This young man was drafted, married after basic training, and was wounded or killed or captured in the middle of nowhere in SE Asia. And now, there is an incredible photo of him—that’s never been seen in the last 45 years—sitting in my studio space. Reading the above post, hearing that he was alone and unable to be rescued, crying for help, reminded me of the fates of so many young men in the US armed forces at that time. And it reminded me of the gravitas and importance of this photo preservation project. I wanted to take a second to thank each and every one of you who has contributed financially to this project and helped it be a success. I’m deeply indebted to you, and I will do everything I can to preserve the memory of these individuals and their service.

Thank you all, from Charlie and I, and our whole team behind AWWI. Please get in touch with me if you have any questions, concerns, or comments at info@chieu-hoi.com. Thanks for reading this fairly heavy and long form update, as well. More soon.