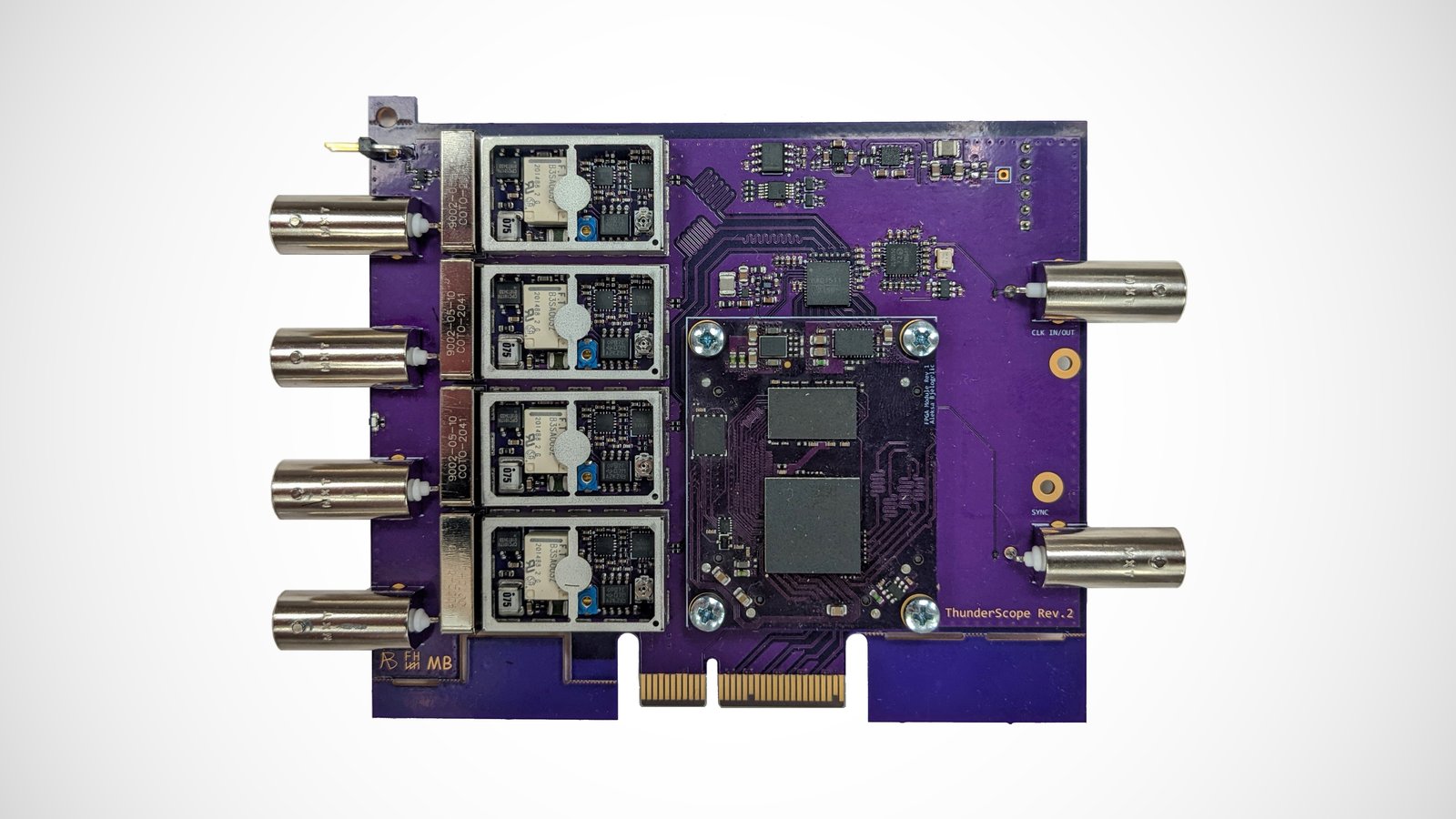 ThunderScope is the first oscilloscope designed for Thunderbolt, allowing real time sample data to be streamed to your computer at speeds exceeding 1 GB/s. By leveraging the powerful processing capabilities of modern devices this design removes all the limitations of traditional oscilloscopes.

Measurements are made quick and easy, and the cramped UI is replaced with a multi window layout that supports modern accessibility features. Sample memory is increased from megabytes to gigabytes and the fixed list of protocols and trigger types is replaced with a constantly expanding repo.

ThunderScope is also open source, so you have complete control of the data from the moment it is sampled. You can easily add your own custom features and benefit from new features built by the community.

Built with Students, Hobbyists and Professionals in Mind

ThunderScope was built with students, hobbyists and professionals in mind. For students, its small form factor solves the portability problem of benchtop scopes. Its modern UI runs on laptops with high resolution displays, lowering the barrier to learning posed by small, clunky benchtop scope UIs. Screenshots are simple, instant and no longer need proprietary vendor software or ferrying about on a USB drive, making lab reports a breeze.

For hobbyists and makers, no more hacking a scope for more bandwidth or to unlock expensive options. ThunderScope comes fully loaded so your hacking efforts can be better served on the project at hand. Since it’s also open source, that project at hand can even be ThunderScope itself.

Last but not least, are you a professional with a unique protocol to test? Need to automate some tricky measurements? Anything you need can be easily added to ThunderScope’s software. If that’s not enough, you can stream the triggered data to MATLAB for advanced analysis.

Your entire test setup can be controlled and powered by your laptop, then fit in your laptop bag when the test is done.

ThunderScope doesn’t leave any performance on the table. Instead of cutting costs by capping the bandwidth at 100 MHz for every channel, ThunderScope’s channels are all rated to 350 MHz. This takes full advantage of the ADC’s 1 GS/s sample rate, allowing not just 100 MHz on four channels, but also 200 MHz on any two channels, and even 350 MHz on any single channel.

Never Out of Date

ThunderScope is built to provide excellent analog performance throughout its lifetime. This design philosophy is the reason some oscilloscopes are still sought for decades after they are released. The problem is that these excellent analog front ends are limited by the fixed processing capabilities that the scope came with, causing them to be less and less useful when working with new protocols or taking complex measurements. By streaming every sample to your device for processing you are never limited by ThunderScope’s hardware. And with ThunderScope, you will have access to an always up to date set of triggers, protocols, and measurements for all your future testing needs.

By using the XC7A35T-2CSG325C Artix-7 FPGA from Xilinx, ThunderScope can stream 1 GB/s of real-time sample data to your device, without missing a single sample! This proved to be even more complicated then it sounds, but this part was up to the task! The 1 Gb/s-capable SelectIO inputs take in 1 GB/s of data from the ADC through ten LVDS pairs. This data is then buffered using a 32-bit-wide DDR3L interface with a raw throughput of 3.2 GB/s. Finally, the data is sent to your device using four lanes of PCIe Gen 2 at 2 GB/s - either directly or through Thunderbolt 3. Altogether, this FPGA handles 6.2 GB/s of data - all while controlling every other part on the board! 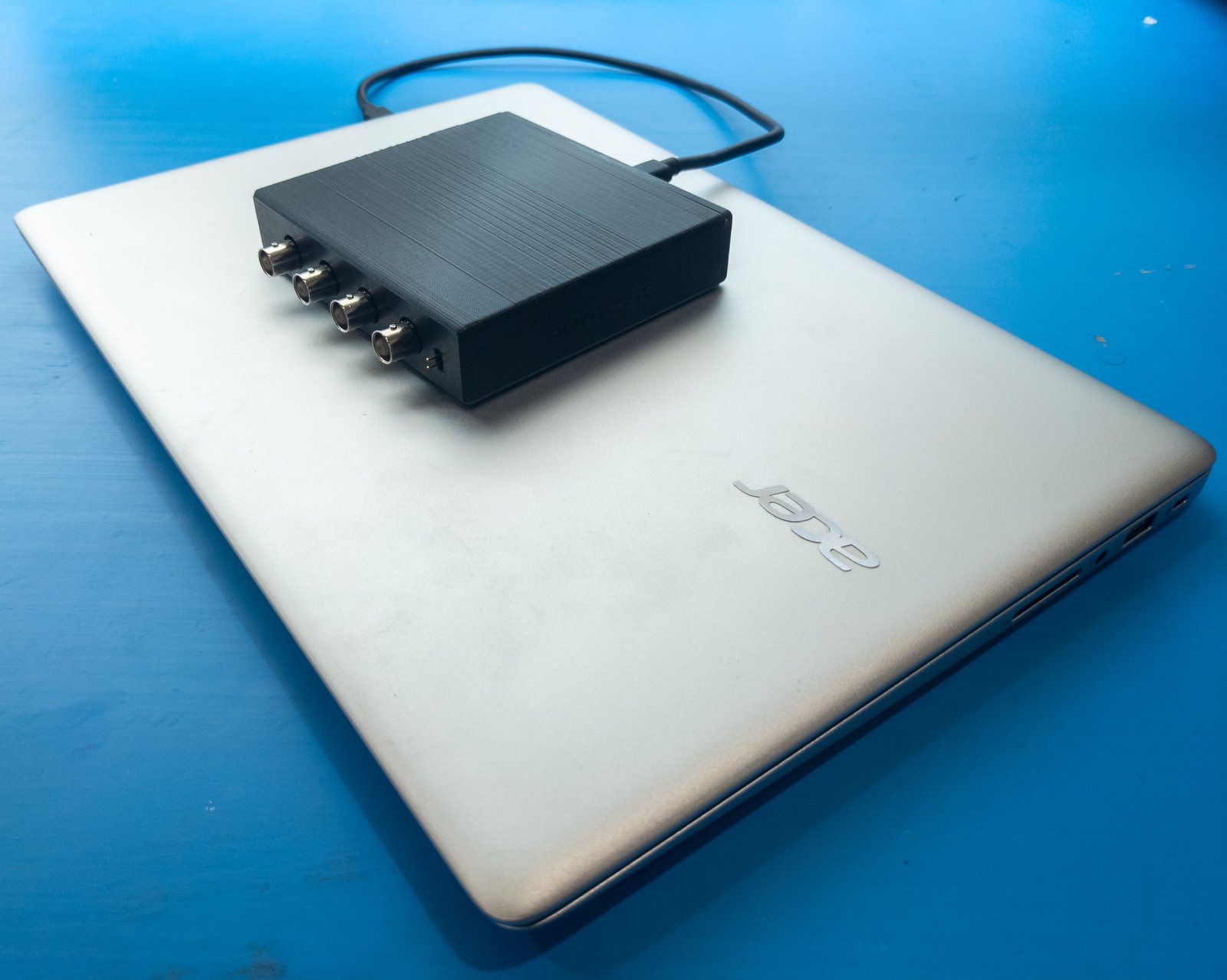 ThunderScope is completely open source, and all development and design decisions are detailed on its hackaday.io page.

You can sign up right at the top of this page to be notified when this campaign launches and to receive any other useful updates. We work hard to send out useful information only, and you can unsubscribe at any time.

"ThunderScope is the first oscilloscope designed for Thunderbolt, enabling real time sample data to be streamed to your computer at speeds exceeding 1 GB/s. " 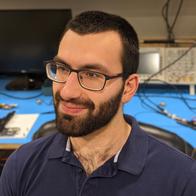 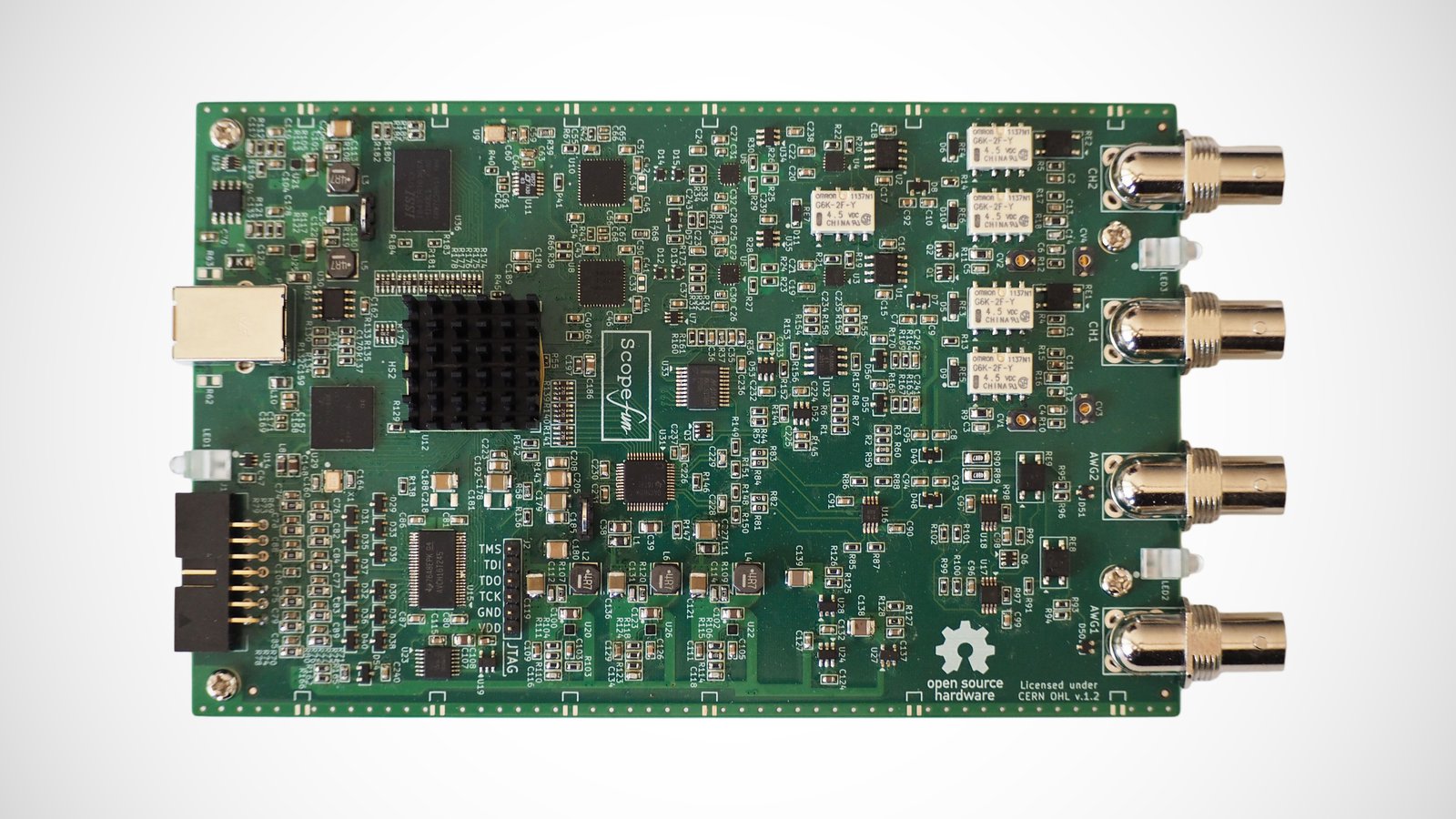 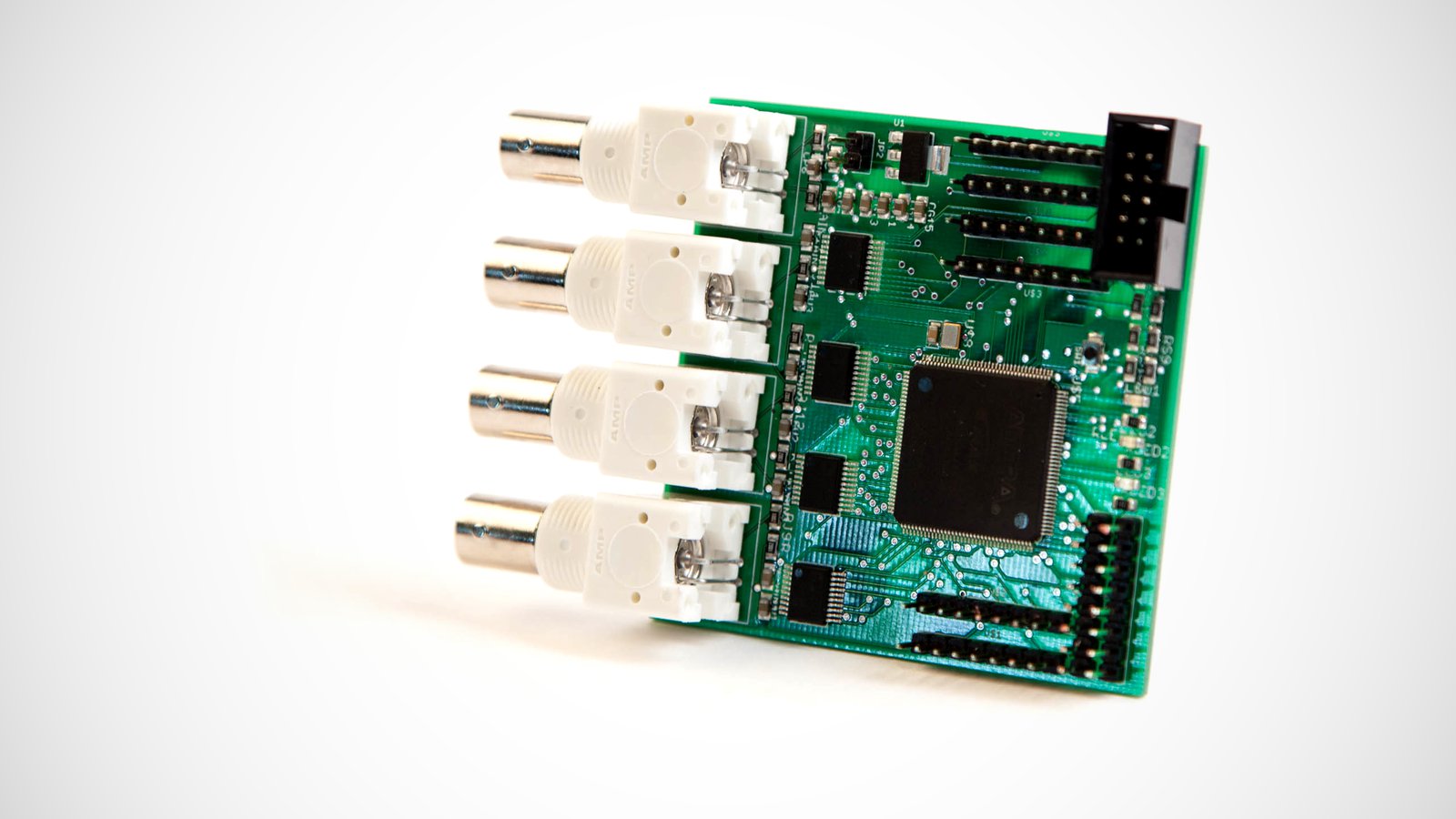