A secure, battery-operated, blockchain-ready, cellular-IoT prototyping platform based on the nRF91

The rapid emergence of misinformation in our modern world compels us to reconsider what we trust and why we trust it. In the future, trust will not be simply assumed but rather proven with verifiable data and code. “Don’t trust, but verify” will soon become a new global standard that permeates all aspects of our personal and professional lives. Pebble Tracker was designed around this mantra as the first out-of-the-box, verifiable platform for decentralized IoT applications.

Pebble Tracker is a launchpad for next-gen IoT applications that are rooted in verifiability and decentralization. Pebble Tracker is more than just a dev-board — it is a full-stack platform that utilizes tamper-proof hardware/software to empower end-to-end solutions that can be verified, and therefore trusted, by anyone. With verifiable data from Pebble Tracker (e.g., GPS, climate, motion, light) and verifiable smart contracts on the IoTeX blockchain, developers can replace error-prone intermediaries with trusted data/code to jumpstart a new era of user-driven, decentralized IoT applications. 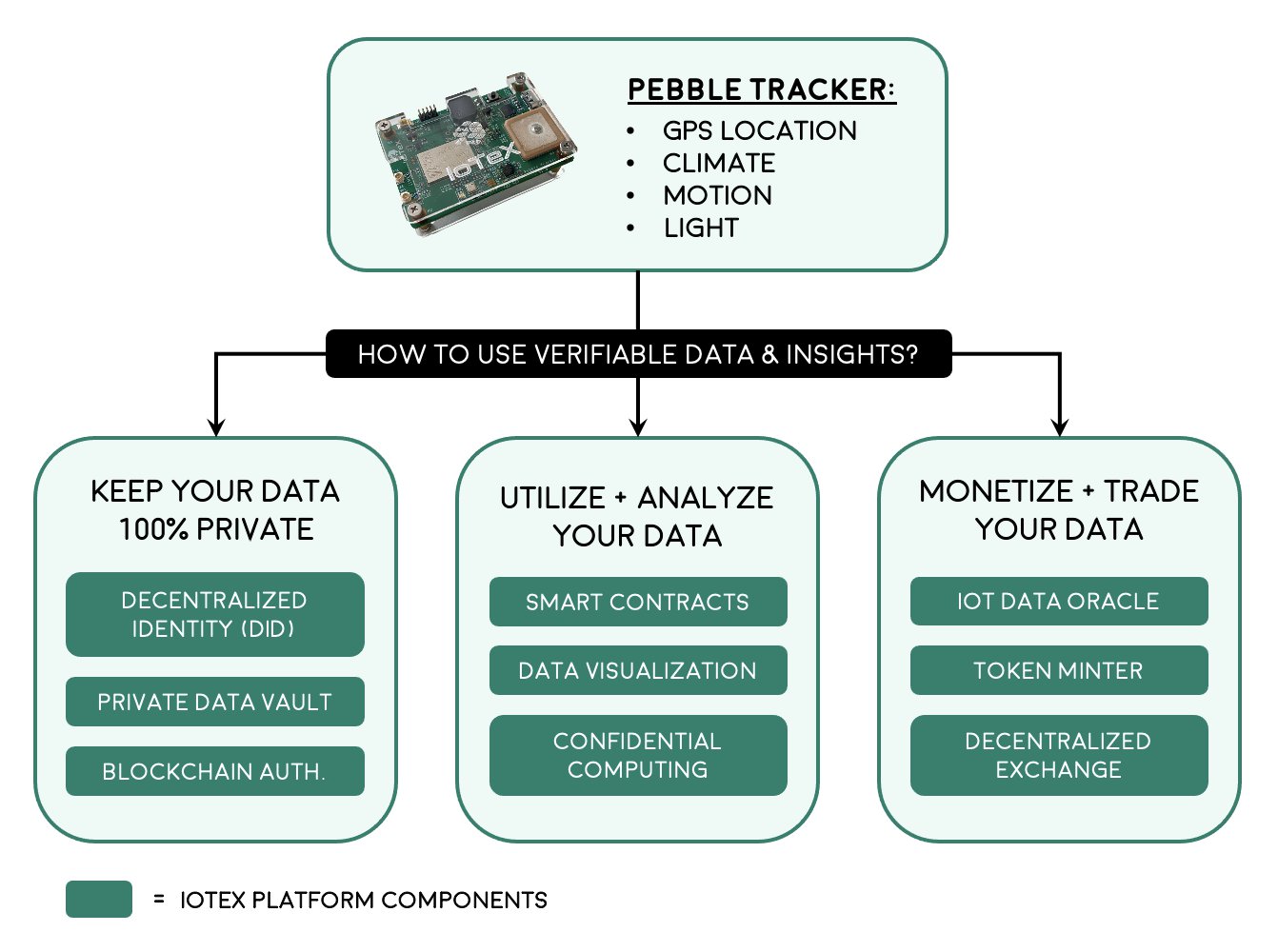 What types of use cases are possible with Pebble Tracker? At a high level, you can think of Pebble Tracker as a trusted robot worker — an unbiased third party that serves verifiable data to trusted smart contracts on the IoTeX blockchain. Just like verifiable price feeds (e.g., Chainlink) sparked a decentralized finance renaissance in 2020, verifiable real world data from Pebble Tracker will greatly expand the capabilities of blockchain by connecting the physical and digital worlds in a secure, trusted fashion. The difference between “sort of trusted” and “fully trusted” is more important than ever — tamper-proof solutions like Pebble Tracker will become the new standard for mission-critical processes and applications.

From automating payments to settling contracts/SLAs to minting digital assets/NFTs — all of these actions can be triggered via smart contracts using real world data from Pebble Tracker. The possibilities are even greater when verifiable data from multiple Pebble Trackers is combined to form community-owned datasets, where contributors can be shareholders in their future value. By connecting the physical and digital worlds, Pebble Tracker will empower developers to reconstruct legacy business models with decentralization and verifiability as first principles. Check out 30+ use case ideas from our community’s latest Idea-Thon.

Pebble Tracker is seamlessly integrated with the IoTeX blockchain, which is open-source and built by an award-winning team of cryptographers and research scientists that currently lead premier standards consortiums, such as the Industrial Internet Consortium (IIC). IoTeX hosts a diverse ecosystem of devices, DApps, and digital assets that utilize our platform’s developer-friendly tools, which are battle-tested and openly accessible. With Pebble Tracker and the IoTeX blockchain, developers can easily spin-up quick prototypes and/or develop production-ready, large-scale IoT applications. We encourage you to check out our developer documentation and onboarding pack to learn more about IoTeX.