First, we figured out the snickerdoodle yield issue that’s been plaguing us for months. After chasing down countless leads and testing hypothesis after hypothesis – mystifying even the Xilinx support engineers in the process – we deductively narrowed the problem down to an undocumented function within the Zynq BootROM.

With nearly all of the Xilinx BootROM mechanics being hidden from view for a variety of reasons (generally revolving around high-security functionality), it was extremely difficult to identify the cause as we have no access to the inner workings of the BootROM "black box." In the end, it was a keen observation by an Avnet FAE that finally prompted us to poke in the right location to produce the magical, single-variable pass/fail scenario – the crown jewel of a successful root-cause failure analysis.

As it turns out, manufacturing variations in the PCB fab and 1.8V power supply passives can, under low-temperature conditions, cause the BootROM to consistently delay processor boot on some boards. This condition was being trapped during our rigorous final test and was negatively effecting our yields. The good news is it is easily addressable with a minor passive component change and we expect yields to substantially increase.

Second, we’ve successfully brought up both sides of the network, video, and audio interfaces on piSmasher. Here’s a screenshot of all four (2x wireless, 2x wired) network interfaces “coming to life.” 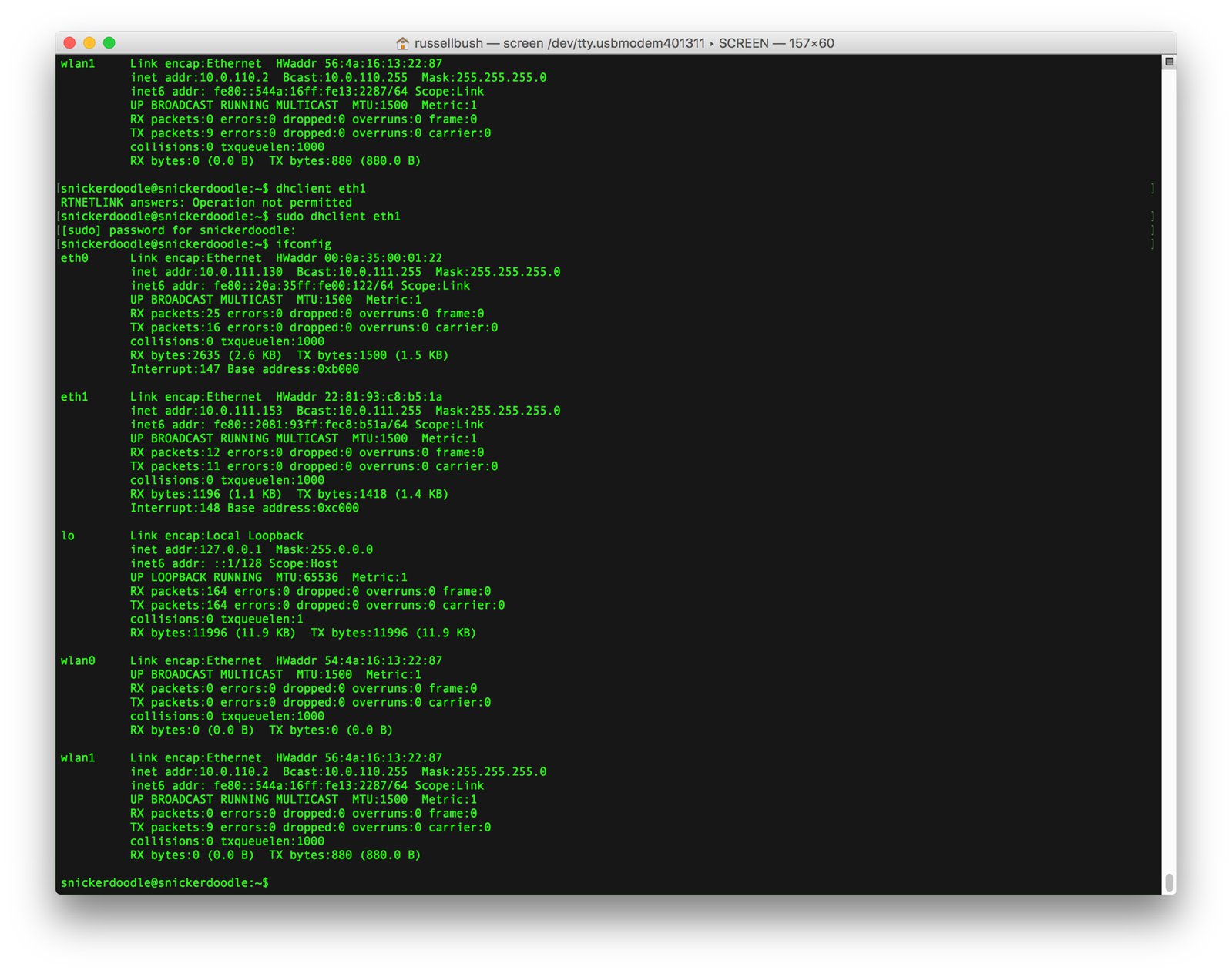 Over the course of the next week or so, we will be running all these interfaces through the ringer to fully verify functionality and bring any potential hardware bugs to the forefront. There will be some routing optimization for the video interfaces required for the final revision – along with some minor signal reroutes for the Ethernet/MIO – but all in all it’s looking pretty good.

As far as timing goes, we’ll be performing a small batch of snickerdoodle reworks at the CM the second half of this week, testing those, then moving ahead with the rest. If all goes according to plan, another wave should be on its way to Crowd Supply by the end of next week (after rework and test). And once the minor snickerdoodle and piSmasher changes are all fleshed out, we’ll be off to the races again as far as manufacturing goes.

All in all, it’s been a pretty positive couple of weeks. Thanks to everyone for your continued patience; we know it’s been a long road… On a side note, you’ll notice breakyBreakys have been changed to “Add to Cart” (vs. “Pre-order”) on the Crowd Supply page, so those are now shipping out a few business days after order. We should be getting some more components (e.g. cabling, wall warts, etc.) in stock there over the coming weeks as well.

That wraps it up for now. If you have any questions/comments or if you want to share one of your snickerdoodle projects/ideas with us, please feel free to either [email us](mailto:hello@krtkl.com?subject=fellow snickerdoodler) or post it in the forum – we’d love to hear from you.