(NOTE: This Field Report is a synopsis of a more detailed report.)

The Portland State Aerospace Society at Portland State University is the lead organization building Oregon’s first satellite, a 2U CubeSat named "OreSat". OreSat was selected as part of the 2017 NASA CubeSat Launch Initiative (CSLI). It’s a completely open source CubeSat with two primary missions: create a "video from space" via amateur, radio-based STEM outreach to Oregon high schools, and develop a multi-camera system for investigating the global distribution of high altitude Cirrus clouds. (More information can be found at https://oresat.org/). 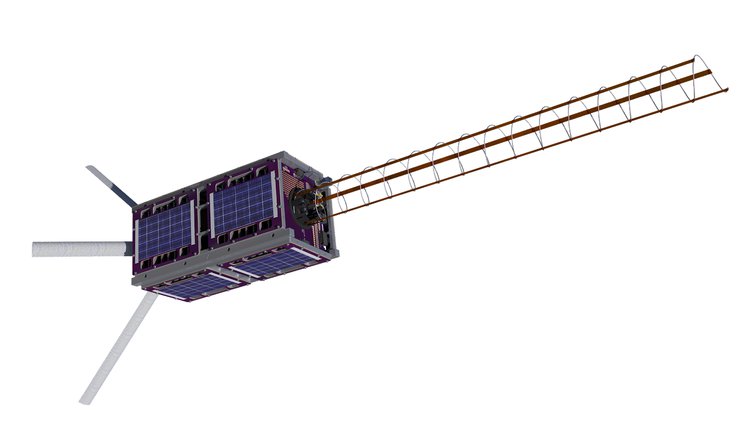 SatNOGS is a do-it-yourself, open source, extremely inexpensive and autonomous ground station for tracking and receiving amateur radio satellite transmissions. Hundreds of SatNOGS ground stations have been built and, along with a cloud-based database to coordinate the receives, it has become the defacto ground station network for amateur radio-based satellites.

The SatNOGS network has one major drawback: due to cost and global regulatory concerns, SatNOGS is receive-only. With OreSat on the horizon, the OreSat team decided to create a larger, more rugged, and more capable version of the SatNOGS ground station meant to be operated by a team of licensed amateur radio operators, such as at a university. Thus the University Class Open Ground Station, or UniClOGS, project was created. 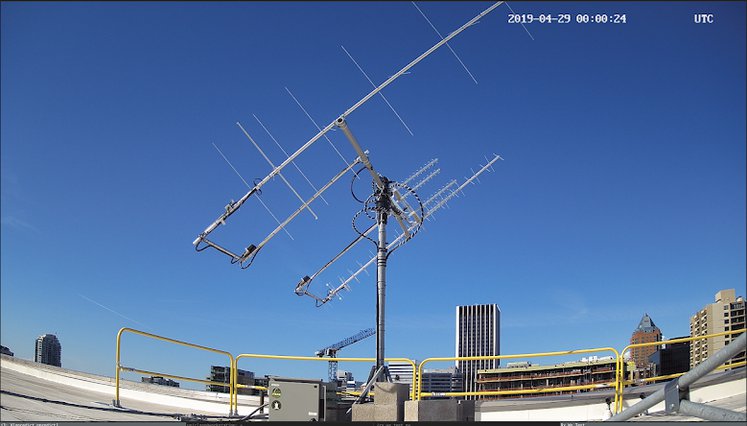 Figure 3: UniClOGS prototype on the roof of the Portland State University engineering building

UniClOGS is meant to extend the SatNOGS project by adding transmission capabilities. Because each CubeSat and CubeSat program is different, UniClOGS is also built to be extremely flexible by using the high end Myriad RF LimeSDR software defined radio (SDR). The current version of UniClOGS supports: 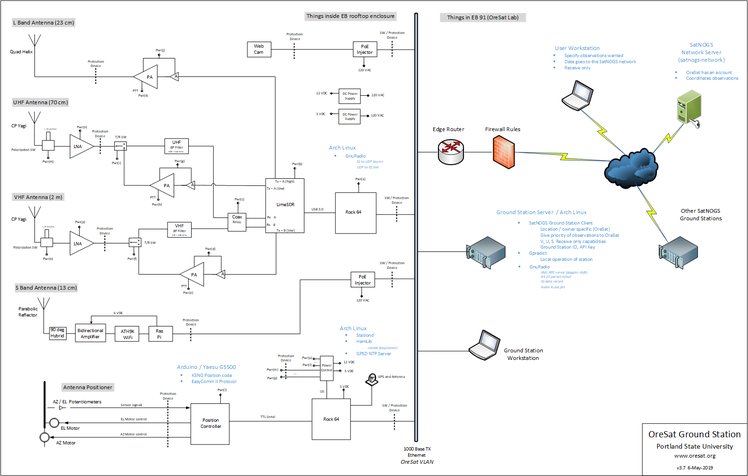 Physically, the system is divided into three discrete pieces:

All of this is mounted on a Yaesu G5500 azimuth/elevation antenna positioner. An RF coax switch connects the UHF antenna to either a low noise amplifier (LNA) for receiving, or a power amplifier (PA) for transmitting. The LNA and PA are then connected to a LimeSDR that provides both UHF and RF input and output signals. The L-Band antenna is directly connected to a PA for transmitting only, and then to the same LimeSDR to provide the L Band RF signal. Figure Four illustrates this system.

The LimeSDR used for VHF, UHF, and L-Band is from LimeMicro, and utilizes GNURadio for modulation and demodulation. The emission type used by OreSat is GFSK at 50 kb/s, and was chosen for the capability of the embedded transceiver on the OreSat spacecraft, an acceptable performance level dictated by the link budget, and somewhat common in the amateur satellite community. However, other emission types are easily possible using GNURadio.

All of the components of the UniClOGS station are contained inside of a NEMA-4 electrical enclosure. This enclosure is mounted right below the antenna mast to provide the shortest path to the antenna boom system. The antennas are connected using 1/2" 50 Ohm Heliax Coax Cable (Andrew FSJ4-50B), and pass into the enclosure through protection devices from PolyPhaser. All components are listed in the bill of materials on the GitHub repo. 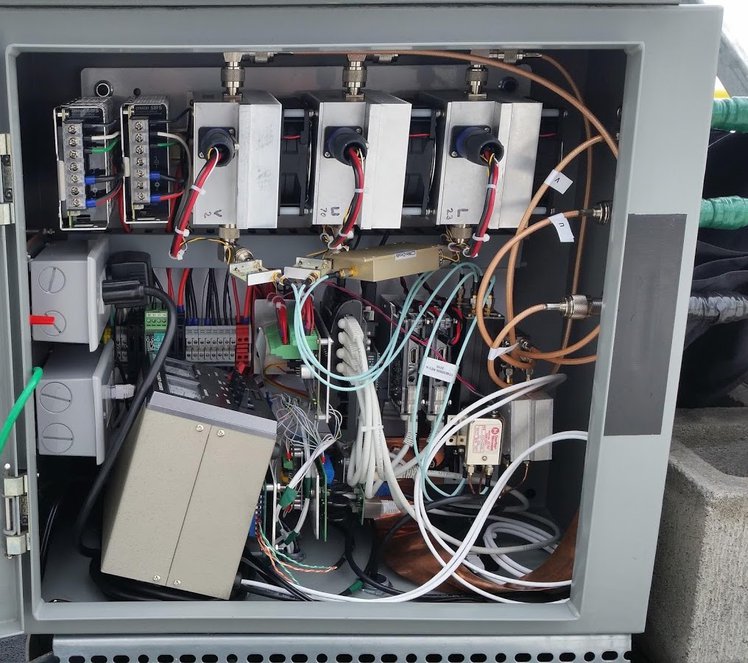 In order to test the software side of our radio subsystem, we used a couple of simple GNURadio Companion flowgraphs, utilizing MyriadRF’s gr-limesdr LimeSuite Source and Sink blocks and ZeroMQ PUB and SUB blocks. The LimeSDR side of the flowgraphs are headless, and simply publish the raw IQ samples to the network. On our workstation we did a simple test by subscribing directly to the radio IQ samples and attempting an FM demodulation on a specified frequency. 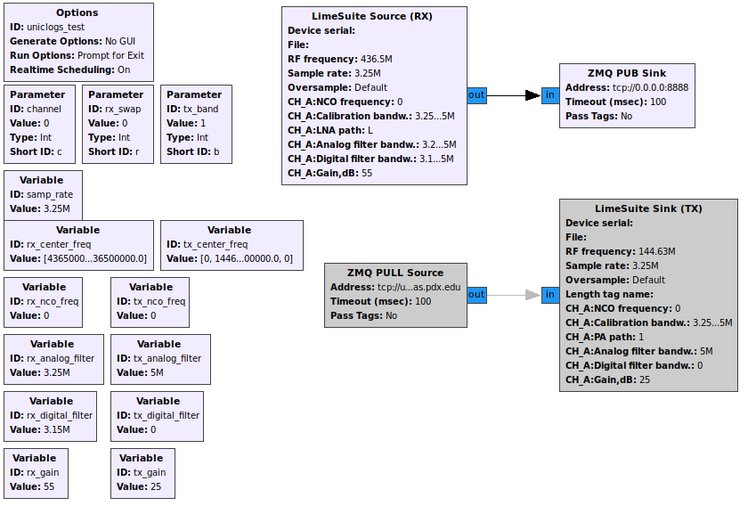 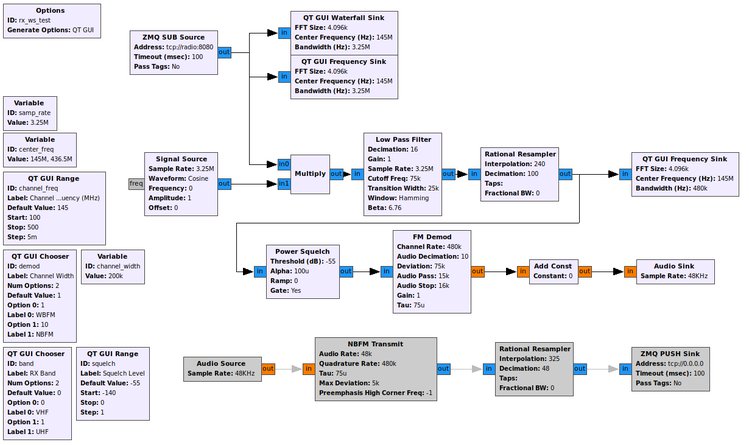 For those wishing to take a look at UniClOGS, or who wish to implement a similar system themselves, more information is available at our GitHub repos: