Lots of fine tuning and production optimizations have happened since our last update. We are already preparing the fourth production run, but let’s first back up to the headline of the last update: Yellow and Yellow Kit are shipping.

About 2000 Yellow and Yellow Kits have been shipped to backers. We received lots of feedback on social media, on Discord and directly via email. While most feedback was positive, we also identified some problems.

In some instances the Compute Module 4 (CM4) (which comes with the non-kit variant) got loose during transportation. In almost all cases simply (re-)seating it correctly fixed the problem. We solved this by using plastic snap rivets to hold down the CM4.

The second production run of ~2300 units arrived in Long Beach, California this week, and is on its way to the Mouser Warehouse in Texas. If you are waiting for Yellow or Yellow Kit, chances are that you will receive it before the end of the year. But, as this is a busy season for supply chains, we cannot make promises, which is why the communicated shipping date remains January 2023.

Last time, we reported that the emission tests for Home Assistant Yellow PoE were completed. Meanwhile, Yellow PoE has passed the full approval.

We found one more issue at higher temperatures that we luckily were able to resolve by changing just two components.

A diodes reverse leakage current could trigger the PoE to shutdown. Since reverse leakage increases with temperature, this was only noticeable at higher ambient temperature and significant load over an extend period of time (2 hours or more). The latest revision has more copper on the top layer, which influences temperature distribution. This made the problem more likely to trigger.

Our production partner was quick in adopting the change, and completed the third production run, consisting of 2500 pcs Yellow PoE, in mid-November. The units are currently in transit and should arrive in time for a January 2023 delivery.

We are currently working on the fourth production run which should fulfill all remaining pre-orders.

We also have been busy working on the software support. The on-board IEEE 802.15.4 radio on Yellow is capable of running Zigbee and Thread. The Thread protocol is crucial for low power devices supporting the new smart-home standard Matter. Currently, all Yellows come with the Zigbee firmware pre-installed. In recent months, we have been working on the Multiprotocol firmware along with a Multiprotocol add-on. With this combination, Zigbee and Thread can be run at the same time. With Home Assistant Core 2022.12, it is now possible to enable Multiprotocol mode through the user interface. 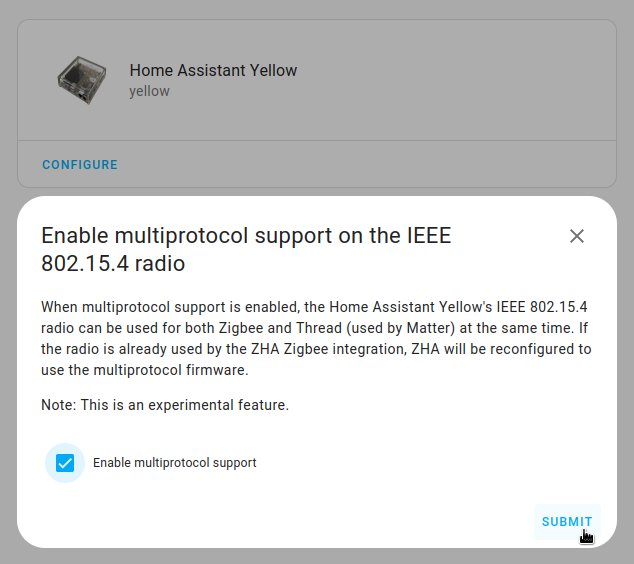 Once multi-protocol is enabled, Home Assistant will automatically install the necessary add-on, update the radio firmware, and reconfigure the ZHA integration to run both Zigbee and Thread at the same time. All previously paired Zigbee devices will continue to work seamlessly.

That said, the feature is experimental right now! At this point, moving back to the Zigbee-only firmware requires manual steps. We do not recommend trying it out in your production environment just yet.

Matter is a new smart home interoperability standard, an open-source protocol, that defines how devices can communicate and work together. Read more about Matter in this comprehensive write-up from The Verge.

Home Assistant Core 2022.12 contains the first iteration of the Matter integration for Home Assistant. It is a big and important foundation that is probably best described as “alpha” or maybe even a “developer preview” — allowing anyone to help and jump in on the Matter development. For the first release, we think that is a great start!

Matter-enabled products are not (yet) generally available. However, if you can get a Matter-certified product, it can be commissioned! 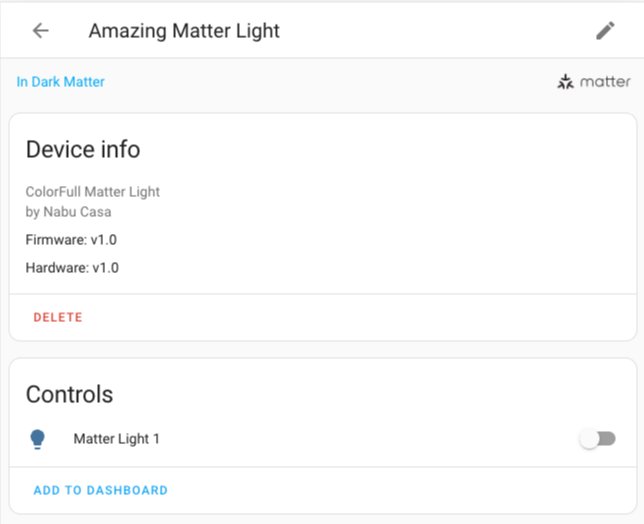 Adding Matter devices (commissioning) will be possible using our iOS and Android Home Assistant Companion apps. Adding support for this to our apps is being worked on and will become available in the upcoming weeks.