Hey y’all! Joey here. It’s been a minute, but there’s good news on all fronts: boards being built, battery tests looking good, AND you can tune in tomorrow for a Teardown Session livestream at noon Pacific! We’ve got a lot to cover, so let’s get to it:

When it came time to produce the final panels for the green Sensor Watch boards, I once again partnered with PCBWay to get them fabricated. I worked with PCBWay previously on the flex PCBs for the temperature sensor, and I was really pleased with the way their engineers worked with me to produce a panel layout that was fit for purpose. This time, once again, I couldn’t be more thrilled with the way the panel turned out. 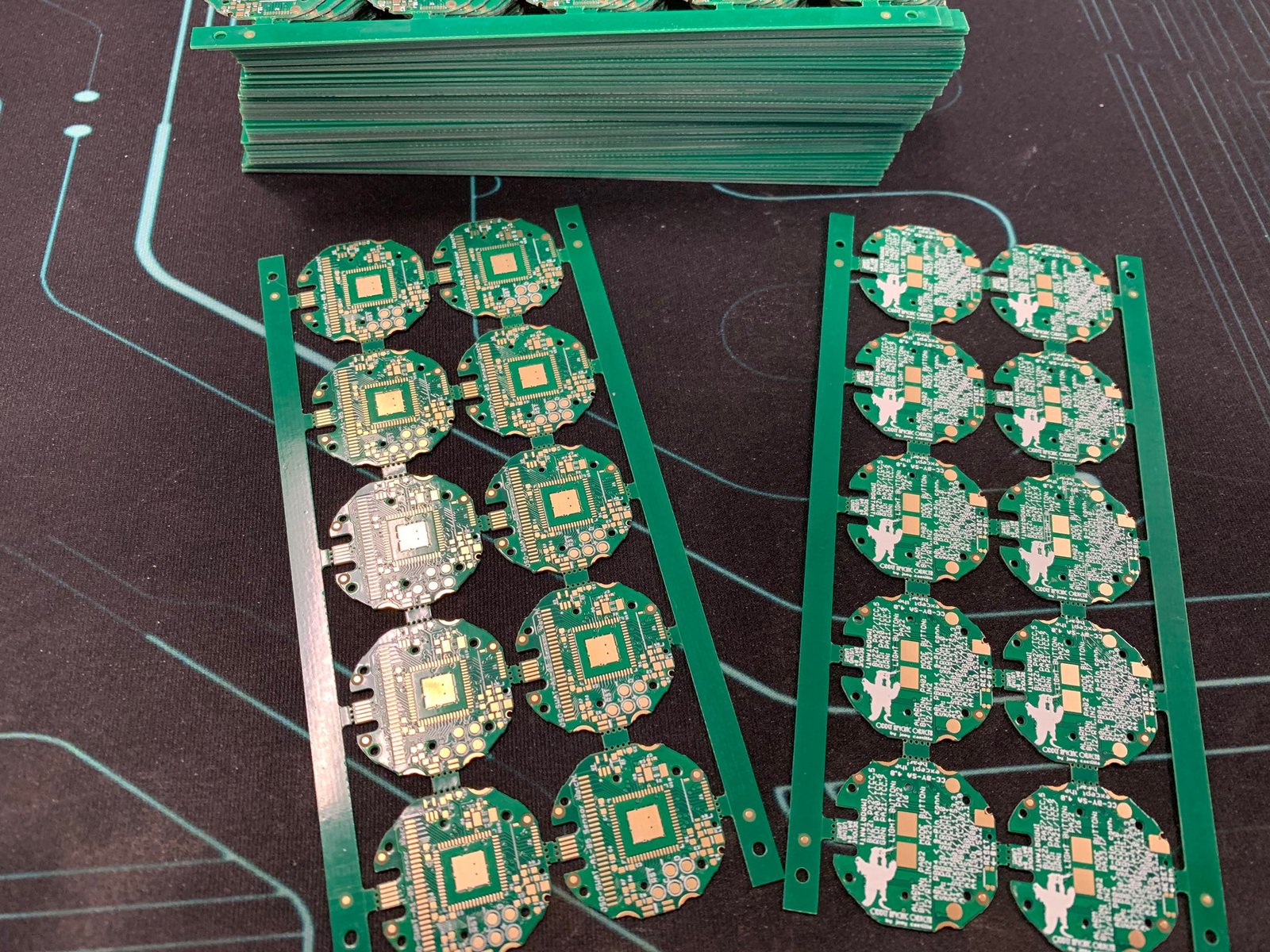 PCBWay’s engineers helped address all the issues I’ve had with previous panels. The boards are spaced out, allowing the edge-plated button contacts to be placed correctly and fabricated with a nice big copper edge. The tabs are placed on the top, bottom, left and right, where they can be easily broken off without any need for additional sanding. In addition, while the spacing has changed, we worked together to ensure that the orientation remains the same as the blue panels from before. This means that my PCBA partner was able to use the same pick and place program as last time, minimizing risk as we move forward with the full-scale run.

For final PCB assembly, we’re again working with Cyber City Circuits in Augusta, Georgia. Last week, they delivered one panel with the first ten boards fully assembled. After extensive testing over the holiday weekend, I gave them the green light on Tuesday to assemble the remaining 402! 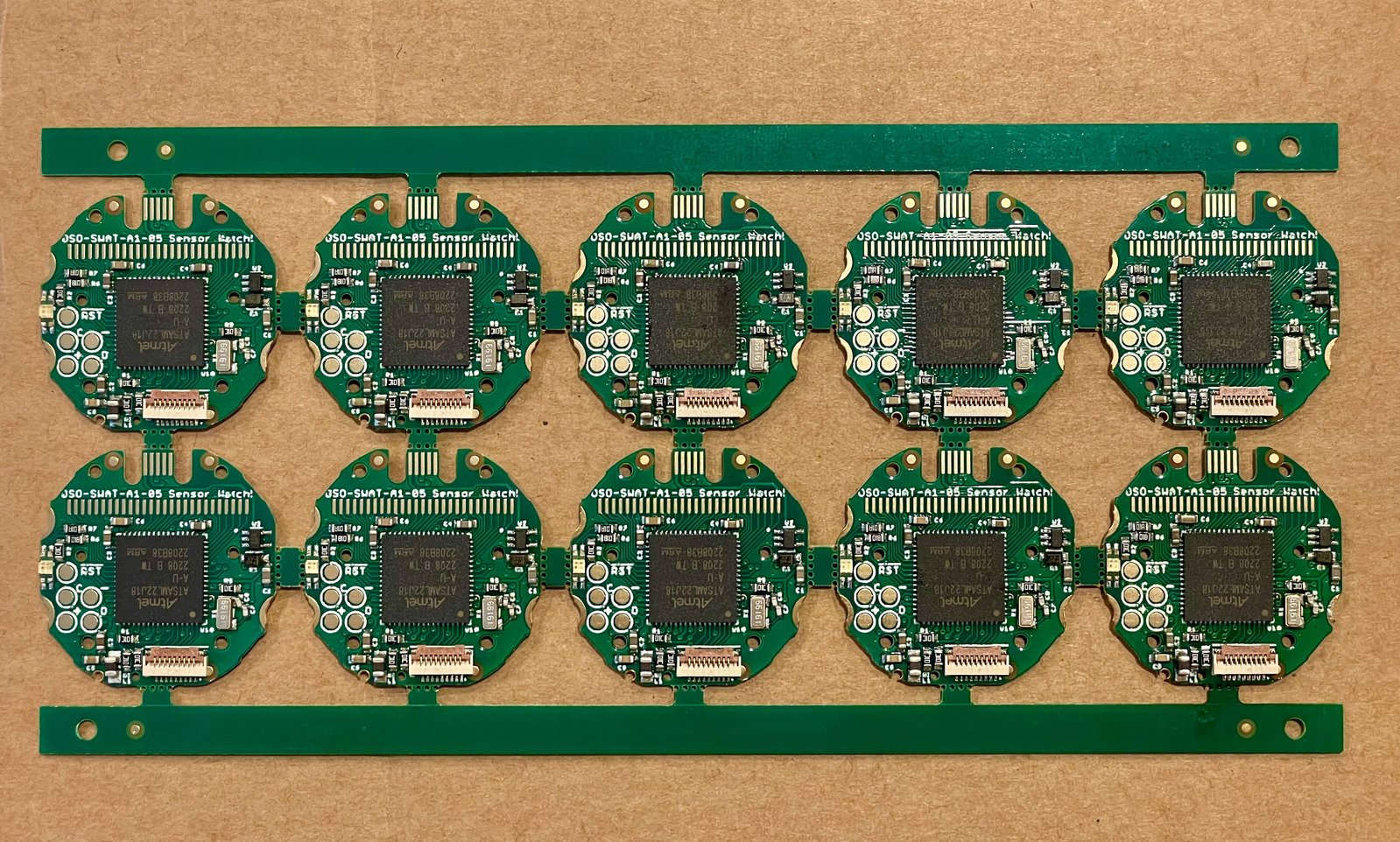 Why the odd number? As mentioned in the last update, we have 412 of our 9-pin connectors on hand right now, with the remainder shipping in a few months. As many of these 412 boards as we can get made and tested, we’re going to pack up and send to Mouser, to fulfill as many backers as we can in the near term. And as soon as the connectors come in, CCC will manufacture the rest.

Last November — shortly before our first Teardown livestream — we started a battery test. Loaded the firmware onto a board, assembled a watch with a fresh battery, and started logging the battery voltage over time. The goal was to see if the battery would last a full year, and there’s good news: this watch is still ticking eight months later! 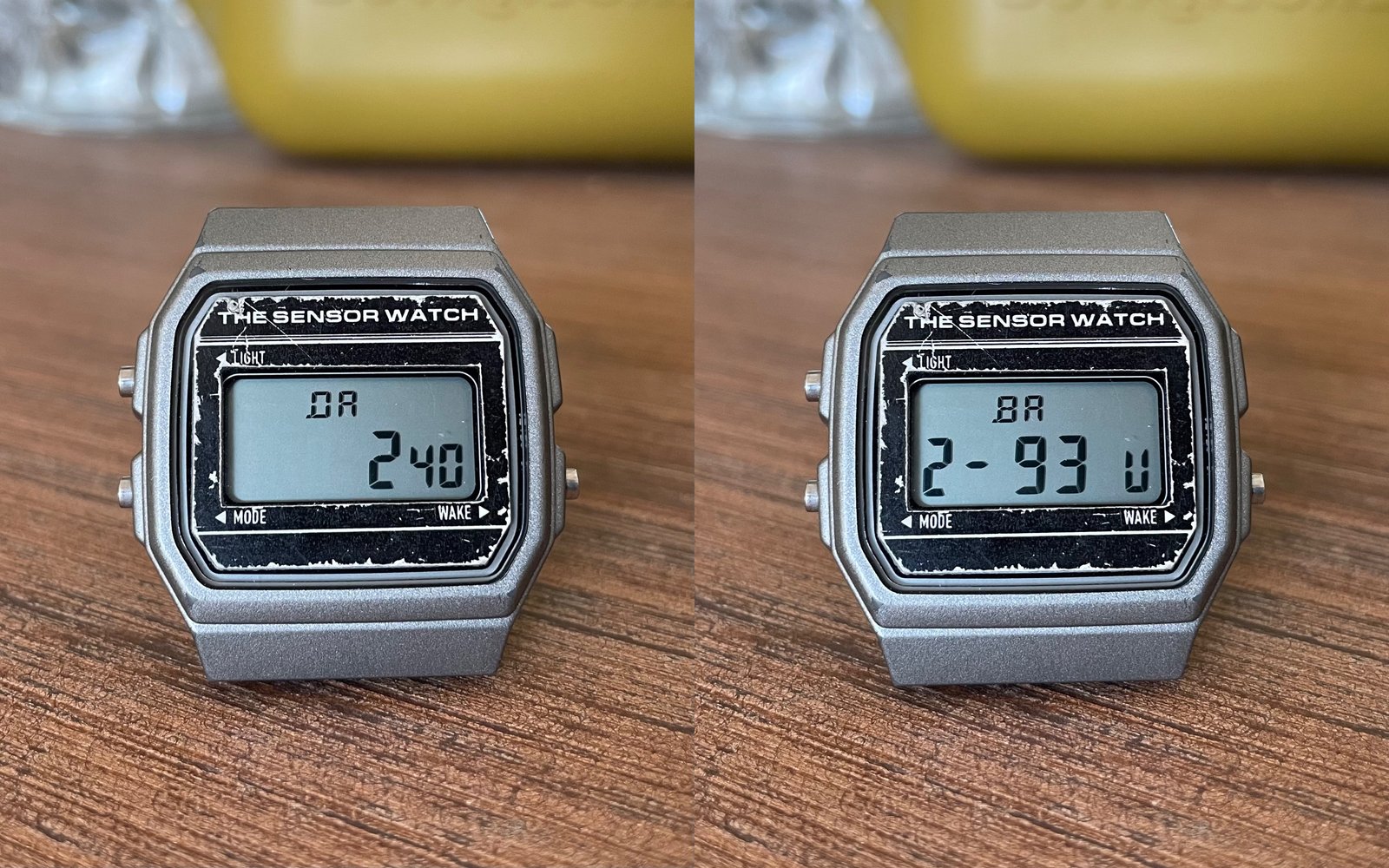 Having said that, the voltage is beginning to sag ever so slightly. Nominal voltage for a coin cell is 3.0 volts, and this coin cell has been right there most of the year. Now at month 8, it’s dipped to 2.93 volts, signaling the beginning of the end. The SAM L22 microcontroller can function down to 1.63 volts, which means we’ve definitely still got some time here. Still, this battery test isn’t the final answer in terms of Sensor Watch battery life.

During the campaign, you may recall an update where I told the story of optimizing the power consumption of Sensor Watch. We cut our power consumption in wake mode by a third, and in sleep mode by half. Those are big, impactful numbers, and it was immediately clear to me that a new battery life test was in order. So I started a second test: flashed the new, more efficient firmware to a board and loaded up a second watch with a fresh battery. That battery’s voltage: 3.06 volts at four and a half months. 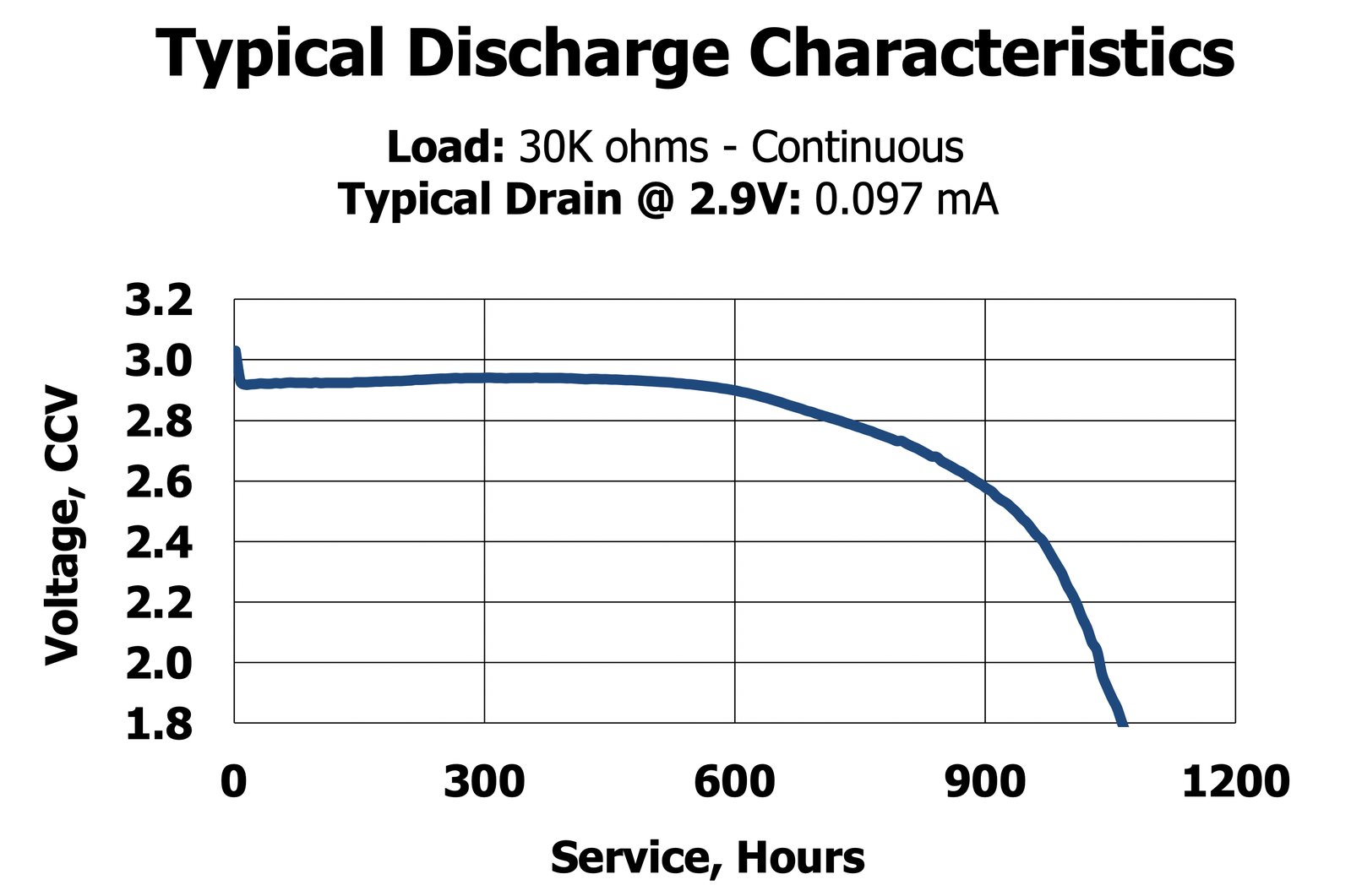 In this graph, the blue line is a standard test from the manufacturer in which they drain the coin cell through a 30 kΩ load: 97 microamperes (µA) at 2.9 volts. Under these conditions, the battery is dead in about 1,040 hours. The thing is, Sensor Watch doesn’t chew up 97 µA; it’s closer to closer to 9.7 µA. The old, less efficient firmware used a bit more (30 µA in wake, 9.9 µA in sleep), and the new more efficient firmware uses a bit less (11 µA in wake, 6.8 µA in sleep). Regardless, scaling the axis this way gives us a good baseline for plotting our battery tests: 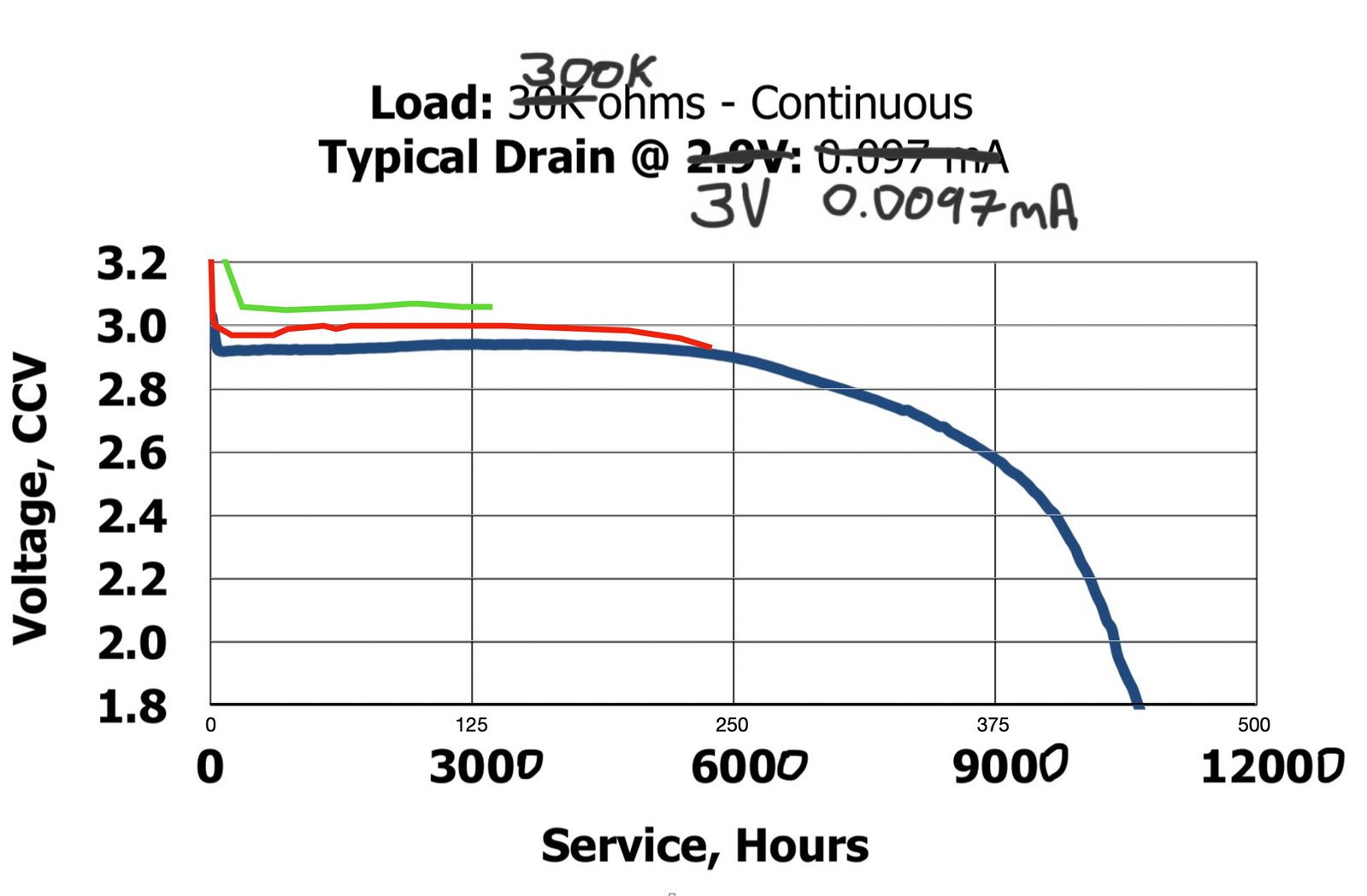 In this graph, red is the old firmware, nearing hour 6000. You can see where, in recent weeks, the voltage has started to sag. That’s not going to go back up. It will continue to sag downward in the coming weeks, and my hope is that it stays at operating voltage through hour 8,760: one year. I think it’s possible! But even if it doesn’t, I’m not worried. Why?

I’m not worried because the green line represents the new, more efficient Sensor Watch firmware, which shipped to the Special Edition backers and will ship on the new green boards. Four and a half months in, it’s still sitting pretty at 3.06 volts. That’s great news: the smaller voltage drop shows us that the current consumption is significantly lower, and I have no doubt that it will make it to the one year mark and beyond.

That’s about all I have for the backer update this week, but do join me at noon Pacific tomorrow (3:00 PM EDT, 9:00 CET) for a Teardown Session with Helen Leigh of Crowd Supply! We’re going to show off some of the latest features in the Sensor Watch firmware, talk testing, packing, and shipping, and share some images from the Cyber City Circuits manufacturing facility where even as we stream, Sensor Watch boards will be getting made.

Thanks so much for your support, and I cannot wait to get Sensor Watch boards in your hands!