Why LED Strips instead of LED Modules?

We began the Pixblasters project conceptualization process by defining our main goals. What were the requirements for an eye-catching, professional-looking and economically viable video LED display?

We wanted to create an LED display that allows for installations that are:

1. Flexible enough to support practically any method of generating digital content, including the use of professional digital signage software
2. Easy to use and with the hardware architecture fully transparent to end users
3. Creatively different from other common products on the market
4. Large, or possibly enormous in size, and
5. Affordable to build and operate

The Pixblasters MS1 video LED controller’s ability to connect to any computer and any operating system as an ordinary monitor made it possible to successfully fulfill the first two requirements from the list. But the last three project requirements are linked to a common question regarding Pixblasters - why do we support LED strips and not the fixed LED modules?

It was never our intention to compete against the controlling solutions for LED module based video displays. That market is quite mature and very well-developed. However, we have recognized specific situations and applications where LED strips-based video screens can offer certain benefits and fill the holes in the existing LED display feature sets.

The high-end module based LED displays are huge “electronic monsters” that implement hundreds and thousands of driving chips, carefully calibrated LED lots, air-conditioners to keep the whole system thermally stable, complex internal networking based on proprietary communication standards, etc. Due to the complexity that comes at high costs, those huge, shiny, beautiful video displays have always been beyond the available price range and beyond the area of technical expertise of the vast majority of enthusiasts and small business owners.

With the Pixblasters MS1 video LED controller we want to change it and to make big video LED displays affordable to everyone. In combination with LED strips, this video controller assures the most important LED display features like the smooth video reproduction, appealing color content and big displays size. 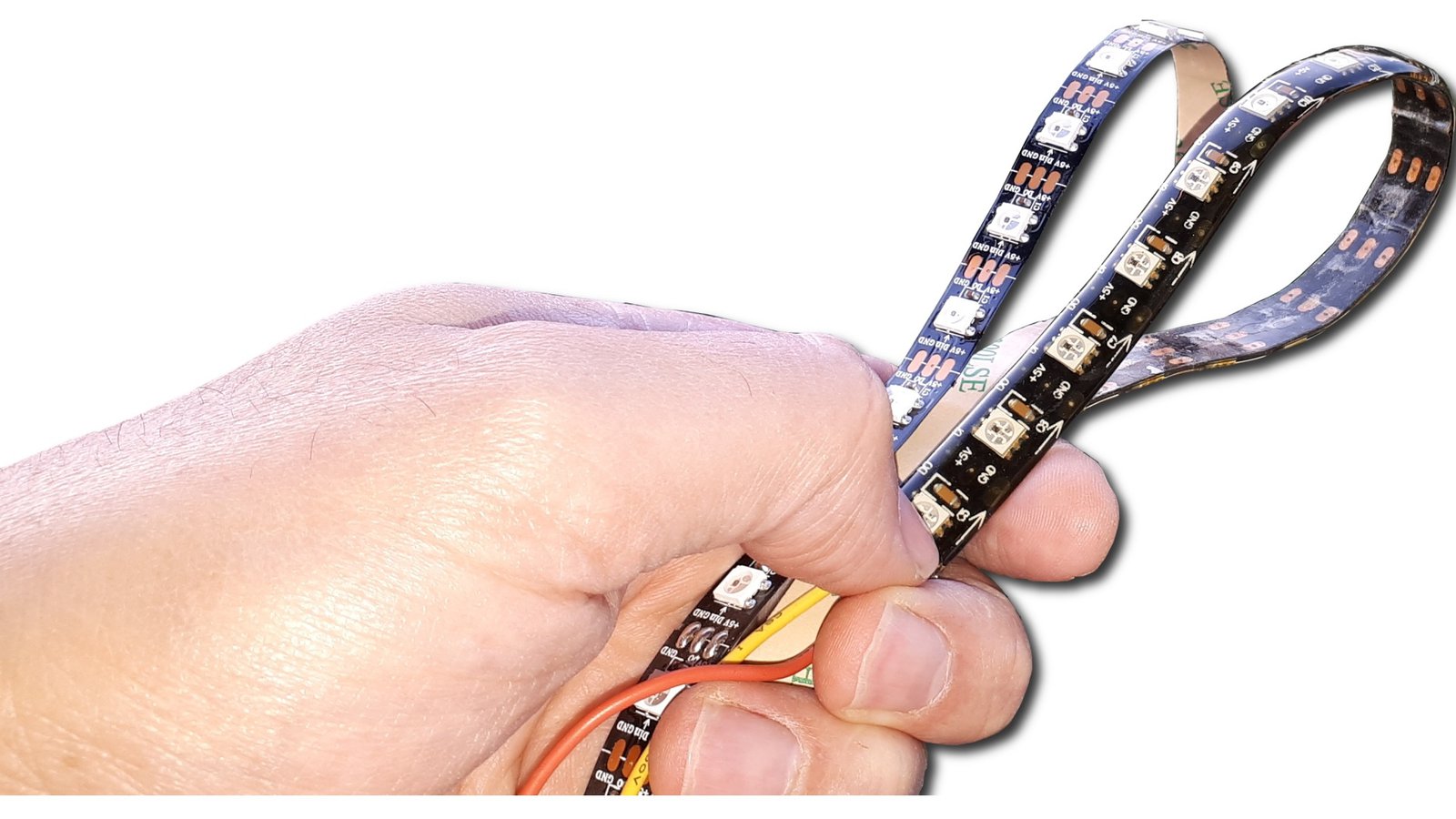 Solution: LED Strips are flexible, lighter, and can be adapted to fit a variety of surfaces.

Responsive and LED strips based video displays offer some features that cannot be attained by standard LED modules. The LED strips can be curved in different shapes. Wrap them around the round pillars, glue them as a transparent curtain in the shopping window glass, embed the animated strips in big printed jumbo posters, cover the room’s ceiling or even the compete street vault by video LED strips display, and new video installations that are hard or impossible to build with LED modules become reality!

Lightweight LED strips do not need complex mechanical supports. They can be easily glued or stapled to different surfaces, inserted in LED pipes, and combined in various lattice structures, etc. Literally within minutes, LED strips can be glued to a plain smooth wall to convert it into a video screen, which can be wirelessly controlled through the Internet.

The strips come with different numbers of LEDs per meter/foot, with LEDs of different size, in different PCB colors, and with different waterproof ratings. The Figure 1 shows both types, the RGB LED strip with a very low water resistance and the waterproof LED strip that is fully covered by the silicon coating and suitable for outdoors applications.

Problem: Broken sections of LED screens look bad and are hard to fix.

Solution: LED Strips are more durable, and easier to repair if they do break.

It sounds a bit funny, but the LED strips based video screens can be cut and repaired by ordinary scissors. The non-functional part of the LED screen can be easily cut off and replaced with new pieces of the LED strip! Much easier than in more complex LED module based video displays that often have scrambled screen parts while waiting for repair.

Solution: LED Strips can be adjusted for pixel pitch and density.

Chained Pixblasters Video LED Controllers can drive LED displays with HD (High Definition) video resolutions, but we strongly believe that great and engaging video results can be also achieved by LED displays, which have smaller video resolution and are great in size. It is somehow related to the way humans see – our eyes and brain connect a smaller number of visible dots (pixels) in a smooth video image.

A bigger pixel pitch (distance between two pixels either horizontally or vertically) and the lower pixel density significantly decrease assembly and operational costs of such displays. With the LED strips, the pixel pitch and pixels density can be freely changed, which cannot be done by predefined and fixed pitch LED modules. A school gym scoreboard visible from a big distance may have a significantly bigger pixel pitch than a room’s ceiling decoration that should be visible from a closer distance. Here we must add that the Pixblasters MS1 controller drives serially connected addressable RGB LEDs, which can be supplied as the off-the-shelf LED strips with a horizontally fixed pitch, or self-made LED strips with an arbitrary setup pixel pitch.

As a conclusion, a modules based video LED display that i.e. shows news with letters of human height size, requires much more LEDs than the LED strips based video display. Of course, the first one usually provides a higher quality image, but the strips based one generates a comparable video effect at a much lower cost!

A single Pixblasters controller directly drives 16,384 LEDs, which in displays built up from the 30 LEDs/m (pitch 33 mm), turns into an active video surface of approx. 17 square meters (~ 183 ft2). Multiple Pixblasters controllers can be chained to build economically viable video installations that can span entire buildings. Potentially it can turn the complete shopping mall’s façade into responsive and remotely controlled video display that shows any multimedia content.

On the other side of the display size-spectrum are ordinary illuminated signs on shops, coffee bars, gas stations… that can be easily converted into video displays connected to the Internet. Such conversion only requires the exchange of the existing background LEDs by the addressable RGB LEDs driven by the Pixblasters and a small computer like the Raspberry Pi Zero, or similar.

A number of used LEDs is not the only significant cost driver. The LED modules require a higher number of driver chips and each LED module contains such driving electronics.

The LED strips based displays have significantly simpler construction and all electronic functions are contained in the Pixblasters MS1 video LED controller. It can be easily illustrated by our Pixblasters MicroSign (Figure 2) display. The photo shows all necessary display parts. The Raspberry Pi computer generates the video output connected to the Pixblasters MS1 video LED controller. The demo uses only a half of available 32 digital outputs and drives 120 x 16 (1,920) LEDs on 16 LED strips attached through the Pixblasters Array-S terminal board. This board can be easily exchanged by any kind of wire terminals. There is also a power supply for the complete video display. 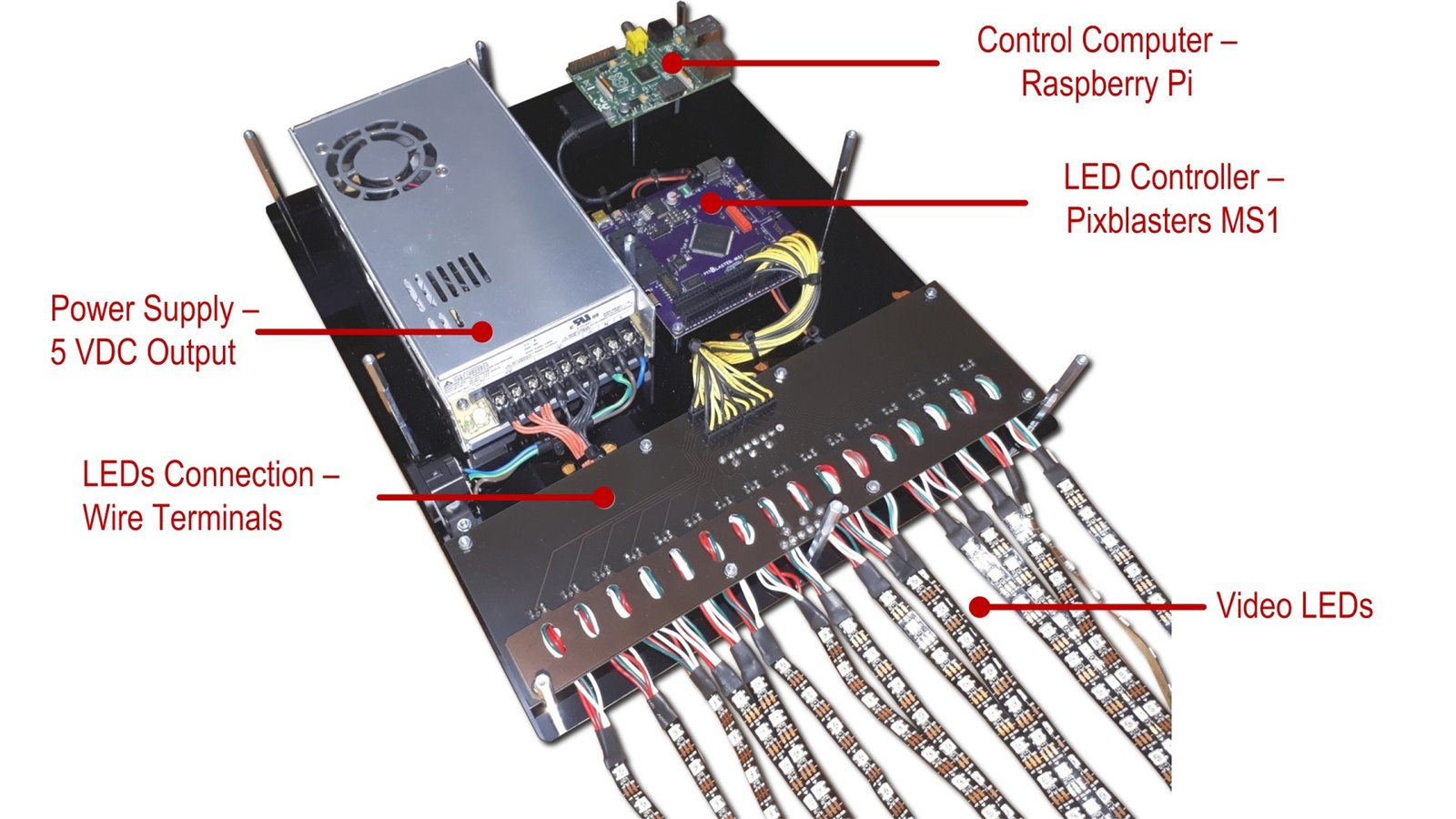 We built this display in one day and named it the MicroSign due to a number of the connected LEDs. But, the LED driving capabilities of this simple electronic assembly are much, much higher!

The Figure 3 illustrates the length of LED displays that can be controlled by the MicroSign, and that length is simply impressive. Additionally, the unused digital outputs can effectively double the vertical display’s resolution and the number of LEDs. Of course, the bigger number of LEDs requires more power and the power supply unit from the Figure 2 would not be sufficient for more than 2,000 LEDs. The MicroSign LED displays with higher resolutions would require additional power supply units, but the LED control electronic remains the same. 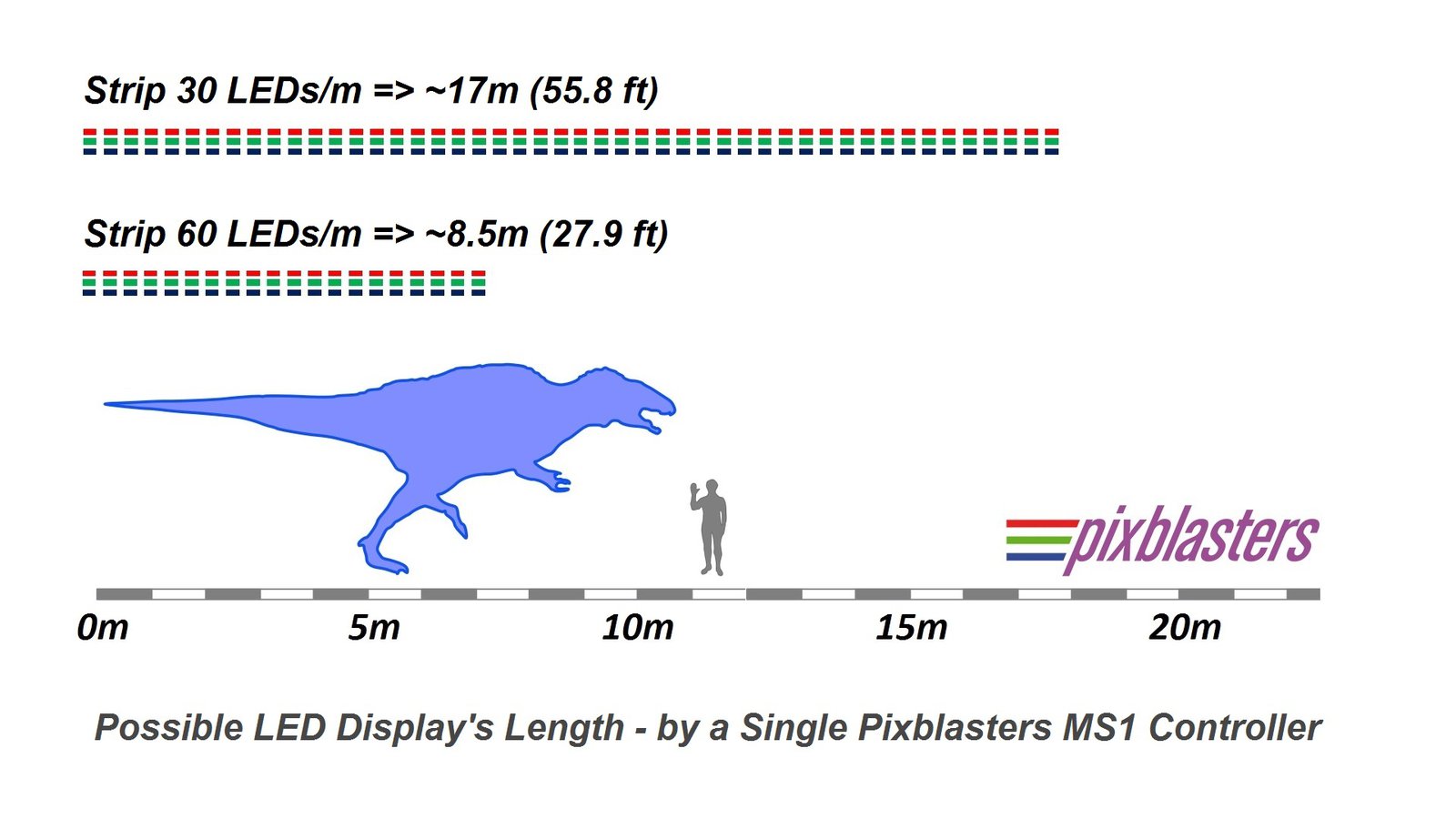 The following video clip shows the Pixblasters MicroDemo in action. We think that this simple display construction, with the activated Internet access and the digital signage software, can transform i.e. dull street shop kiosks into multimedia hot spots. Glue the waterproof LED strips around the kiosk’s top and it will light up!

Please note that the MicroSign display demo use the Pixblasters open-source FPGA. The code is available here.