Due to their high cost and complexity, huge, shiny, beautiful video displays with thousands of LEDs have always been out of reach of enthusiasts and small business owners. Pixblasters MS1 changes all of that. 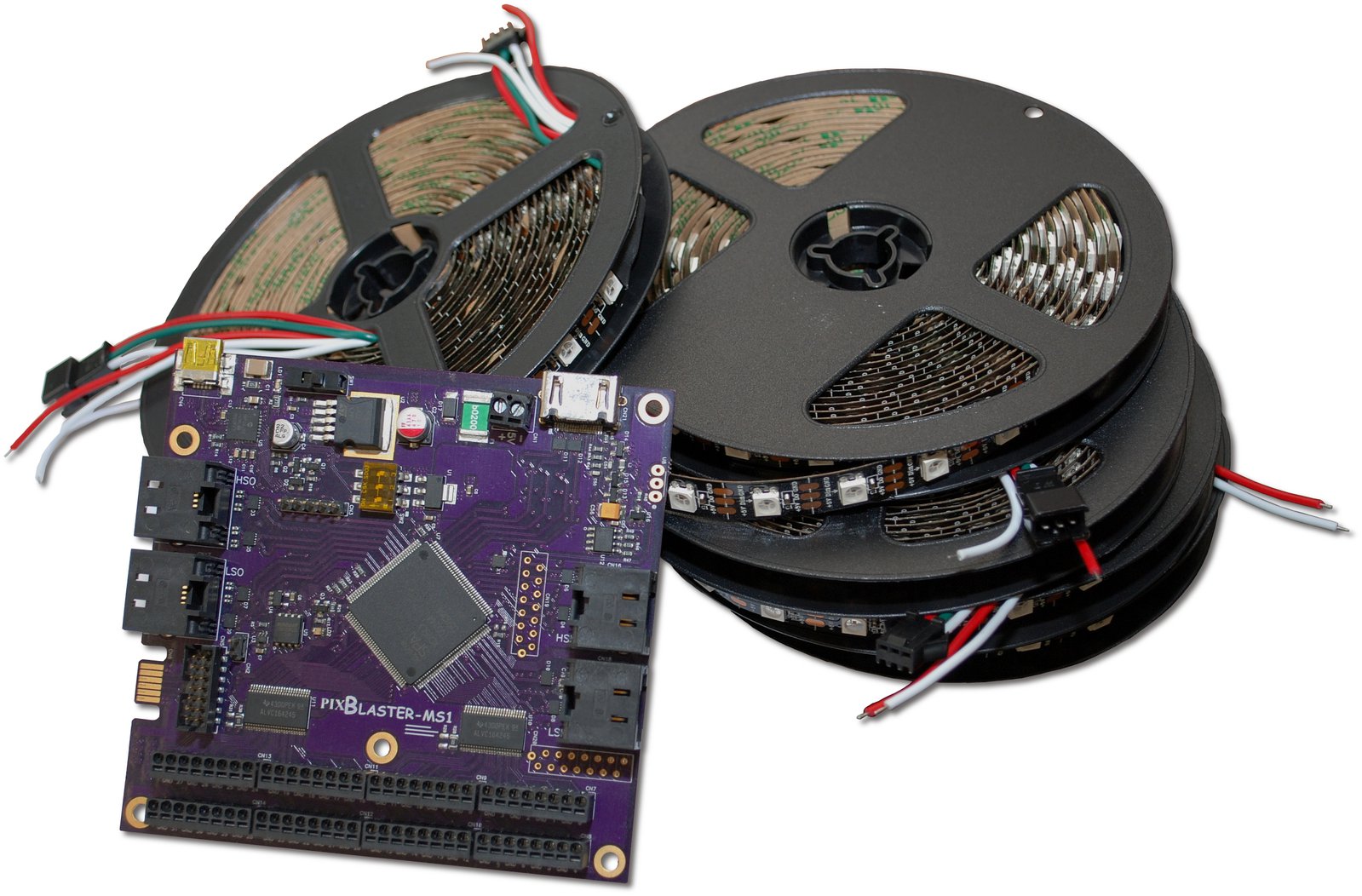 Pixblasters MS1 enables DIY enthusiasts and signage professionals, even those with minimal technical skills, to turn a bunch of addressable RGB LED strips into immense video LED displays. This FPGA-based LED controller enables new levels of professional-grade digital signage that cannot be attained by standard LED modules. The LED strips can be curved and glued to different surfaces to form giant yet economically viable video installations that can span entire buildings. 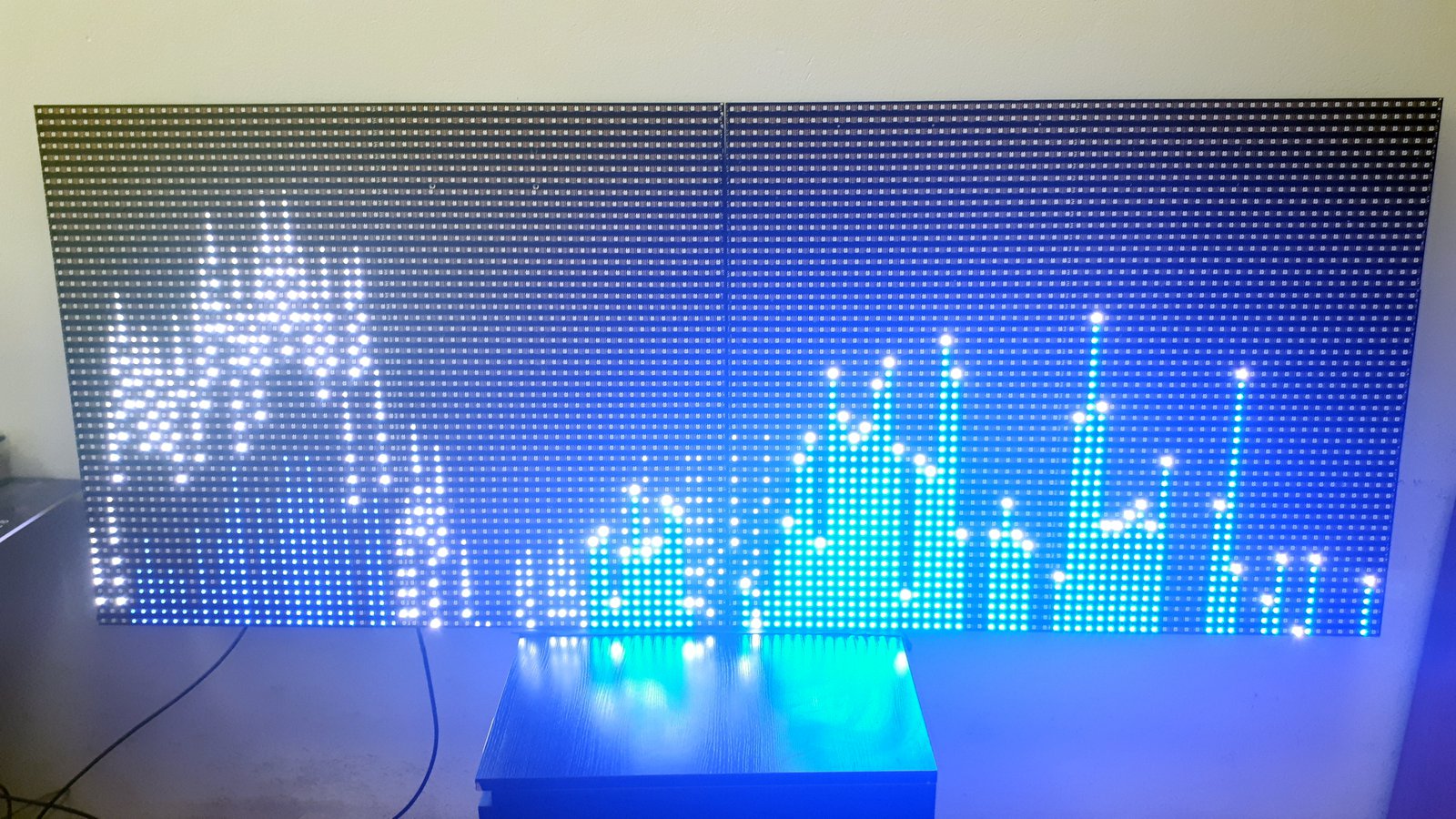 Pixblasters connects to any computer as an ordinary external monitor, with no programming needed. You can use it with Raspberry Pi, PC, media boxes, phones, etc. Simply plug in the monitor cable and the controller will smoothly drive the LEDs at the maximum frame-rate of 60 fps.

Anything that shows in the selected part of monitor image shows on the LEDs as well. No need for special software for anti-aliasing or fonts. Use any digital signage software and add layered screen divisions, text, animations, video, RSS… LEDs work at their maximum speed and are perfectly synchronized, no matter the number of LEDs and chained MS1 controllers, or the display size.

A single MS1 can control 4.7/17.7 m² (~ 50.6/190.5 ft²) while daisy-chained MS1s can control an LED display of hundreds of square meters using thirty to sixty LED strips. Daisy-chained controllers that drive a total of 16,384 LEDs can support HD LED displays.

Control it remotely from anywhere in the world through the network interfaces of the driving computer. Don’t worry about the LED display’s architecture. Users with special display applications (such as big, real-time timetables and scoreboards) can develop custom software for a computer monitor.

Use the hardware platform for experimenting with, and learning about, driving RGB LEDs. Note: the open source FPGA demo design supports a subset of the fully-featured Pixblasters MS1 LED controller.

Display Video from Any Computer

The Pixblasters MS1 video LED controller connects to any computer and any operating system (as an ordinary monitor) to display the user-selected portion of the monitor image on up to 16,384 LEDs at 60 frames per second (FPS). Multiple daisy-chained Pixblasters MS1 controllers can drive high-resolution LED displays built of hundreds of thousands of perfectly synchronized LEDs that can display any visual content with absolutely no programming required. The controller puts no burden on the driving computer, which is free to run digital signage players, media players, and other video software at full speed. The LED displays controlled by the Pixblasters MS1 can be remotely managed by the digital signage software of your choice from anywhere in the world. 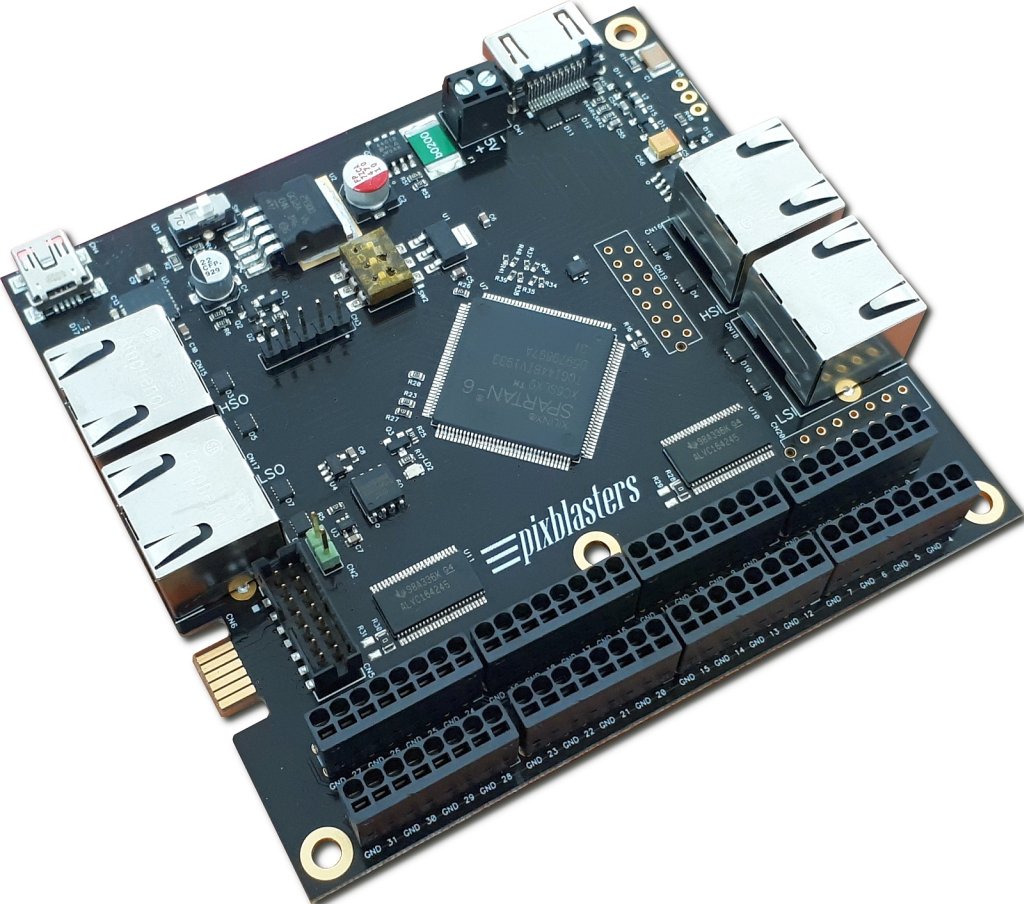 The Pixblasters Video LED Controller is flexible enough to fulfill DIYer and developers dreams and at the same time, to enable established professionals to take their signage business to the next, maybe a nationwide or a global level.

With the Pixblasters controller, it is finally possible to make professionally looking LED displays with addressable LED strips, without any of usual constraints on the size, graphics and video content, display management, storage capacity, or other limitation common to the competing LED controllers.

The Pixblasters video LED controller enables you to tackle any LED signage project in a cost-effective and flexible way - with no programming, no soldering, and with no more than a simple screwdriver.

The possibilities are endless; here are just a few we thought of to get you started:

Small signage shops that makes non-illuminated signs can expand their portfolio and offerings by incorporating the Pixblasters controller into their existing production workflow. Adding video LEDs can take any sign to the next level and make it more memorable.

Pixblasters can also be implemented (with small changes) within housings of existing illuminated signs. The installed video signs can be remotely controlled, so companies have more control over what kind of digital content they’re displaying to their customers, and can make any changes needed quickly. Using the special LED strip’s features to deploy very large and very cost-effective display installations will upgrade and improve your professional signage.

The Pixblasters MS1 Video LED Controller is easy to use and enables simple hardware and software-agnostic developments, but that doesn’t mean that it’s only for hobbyists. It also comes with an open-source demo FPGA design and board schematics to enable further experimentation with RGB LEDs. The open-source FPGA Demo Design supports a subset of the functions available within the Pixblasters MS1 controller. 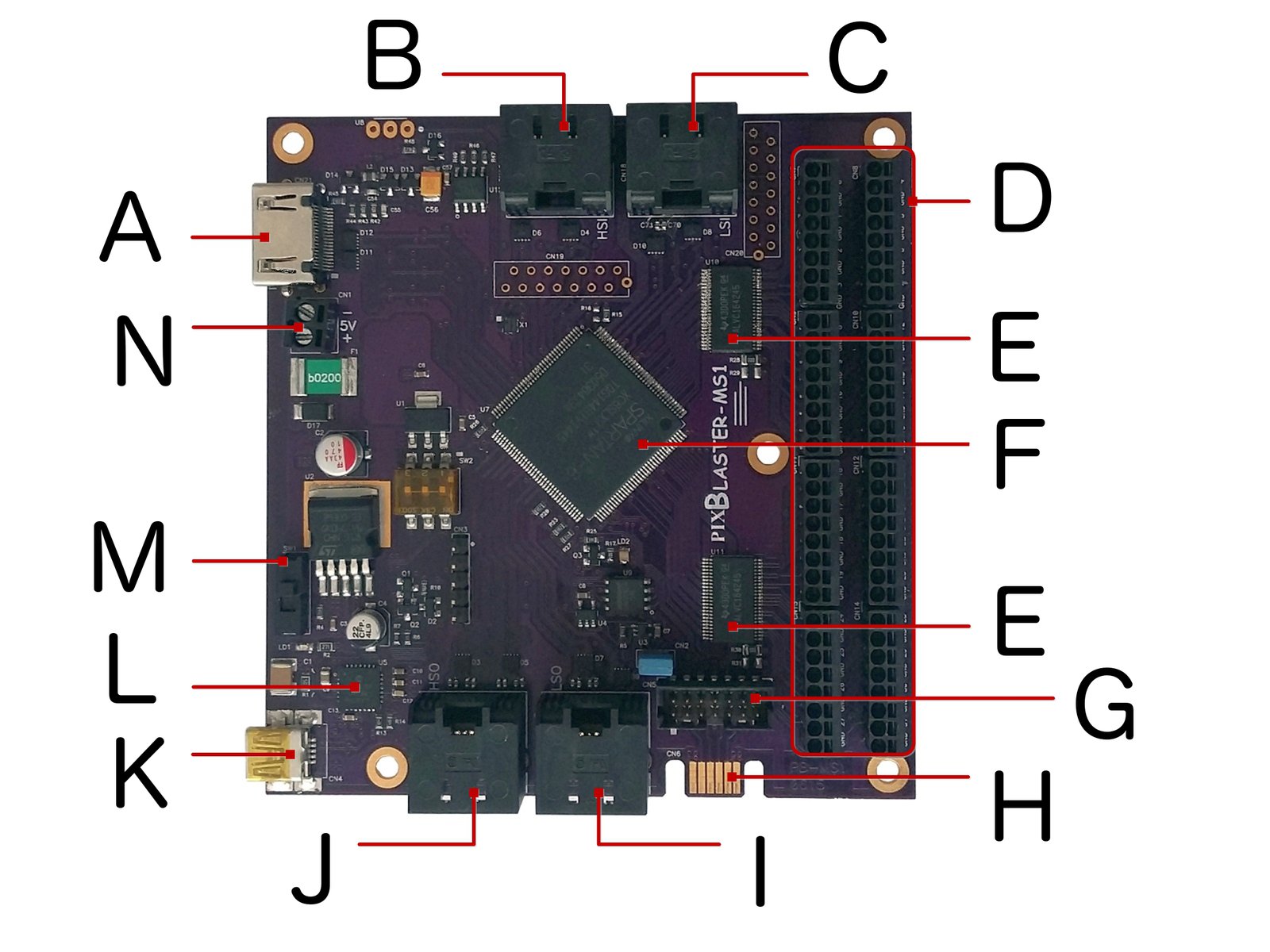 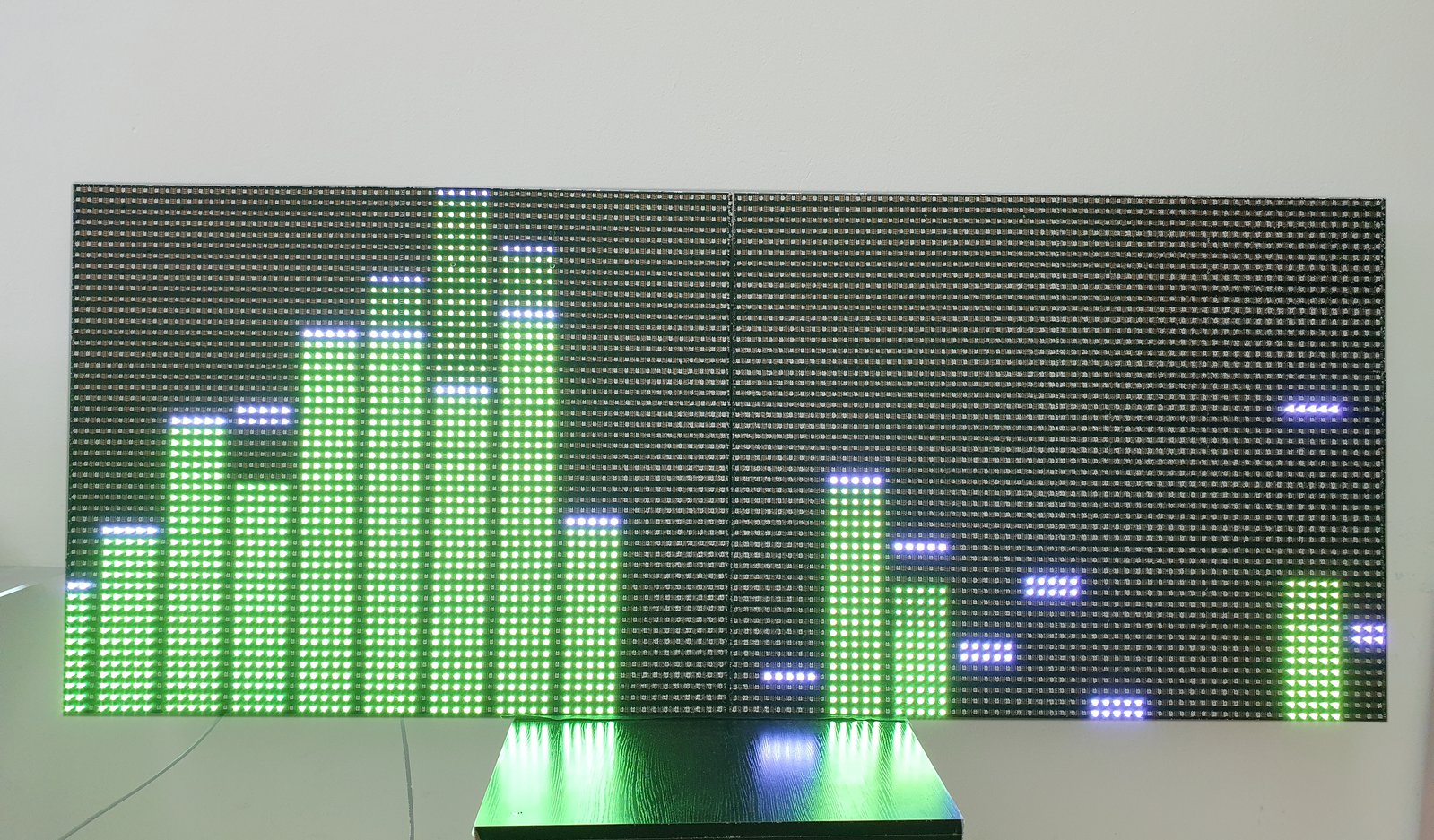 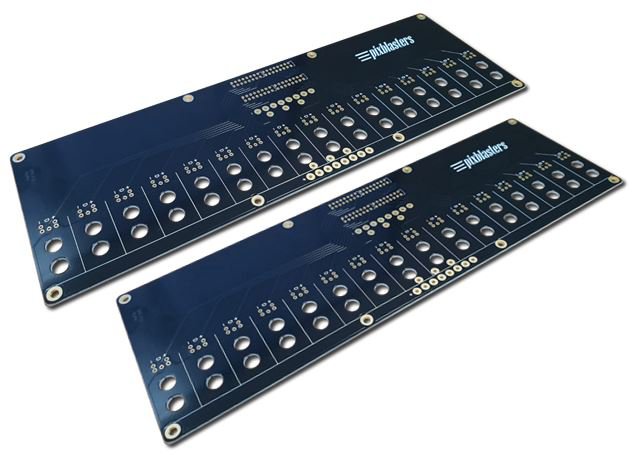 This board enables releasable connections with the Pixblasters MS1 LED controller and easy building of the LED matrix. It distributes the video control signals and the power sourced from an external +5 VDC power supply. The board includes holes for easy wall mounting. Each controller supports up to two Array-SL Boards for a total of 32 strips per controller. Note: The Array-SL board set is helpful, but not necessary for using the Pixblasters MS1 LED controller. 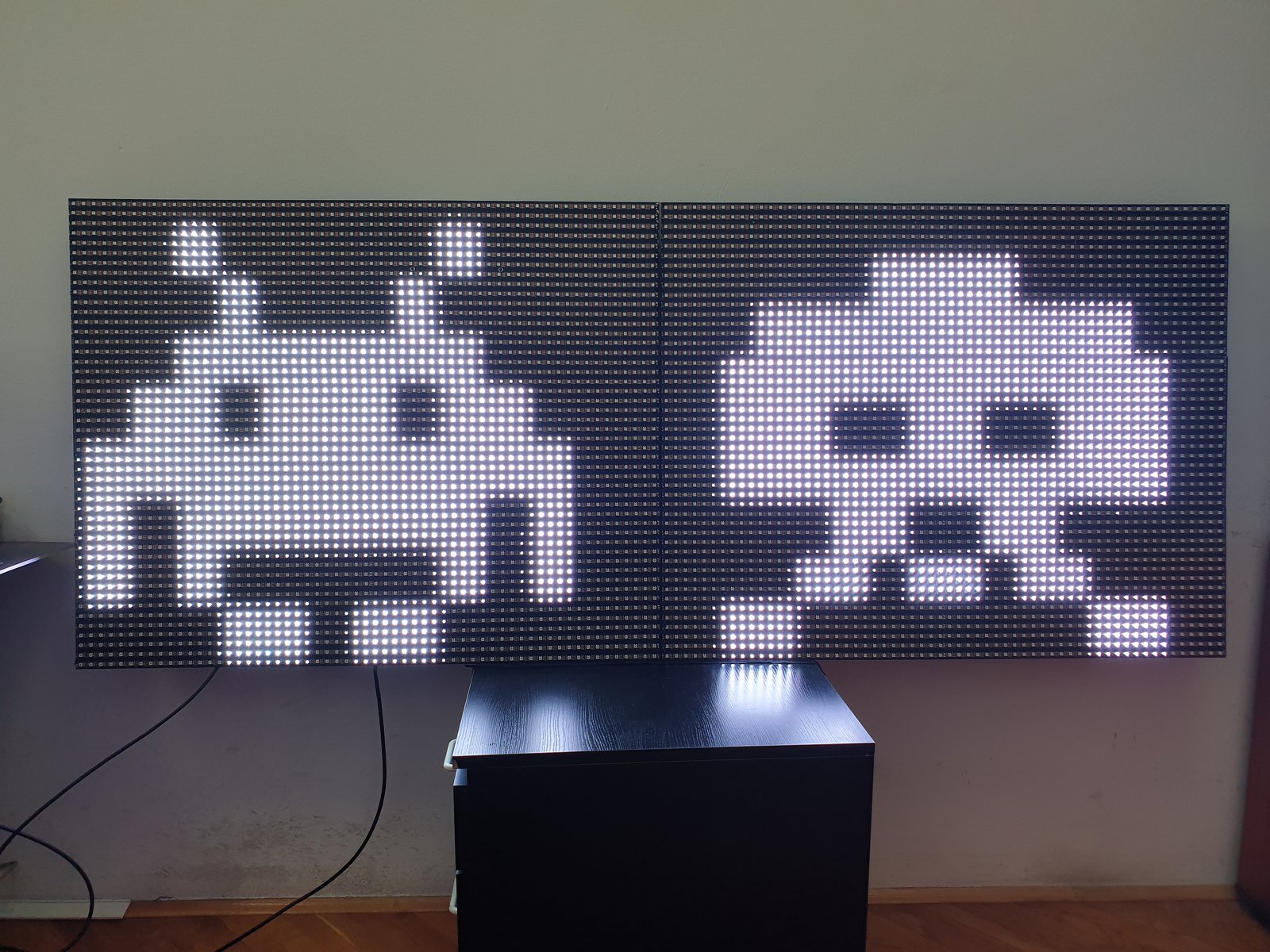 Pixblasters makes it easy to manage your video content. Instead of browsing the Internet in search of code snippets for specific LED patterns or odd software libraries that require guru-level software skills to format into an LED display image, Pixblasters users just need to plug in the monitor cable to display any graphics and video with no limitations. Stills and animations, AVI, FLV, WMV, MP4, etc. - what you see on the computer monitor connected to the selected computer is what you get on the Pixblasters MS1 controller-driven LED display with absolutely no coding required! 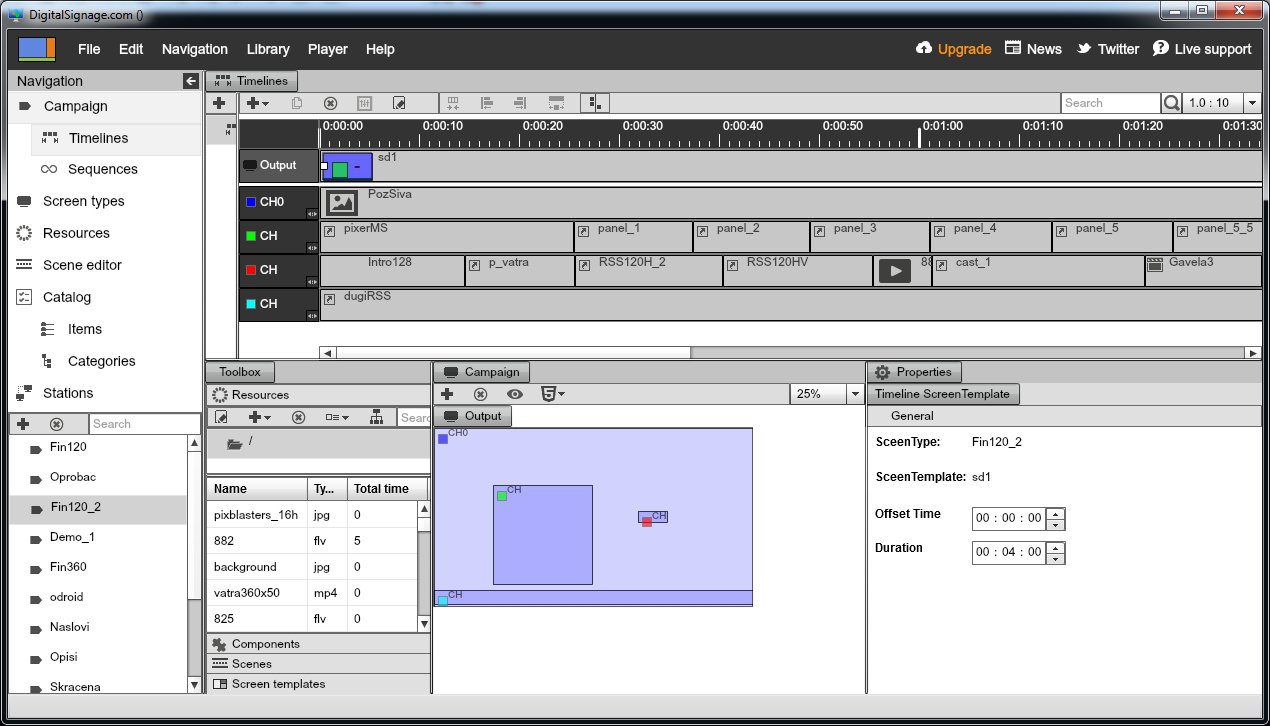 Pixblasters users can generate the LED display content in many different ways. For example, one can use the Windows Media Player animated visualizations to play music synchronized with video effects, or the Raspberry Pi Omxplayer video player to play MP4 video clips on the LED display. Those with special display applications (such as big real-time timetables and scoreboards) can develop custom software like graphics for a computer monitor.

Use any Digital Signage Software

To enable and encourage developer experiments with the FPGA design and with different RGB LEDs, the Pixblasters team is providing an open source FPGA demo project and PCB schematics. The FPGA demo, which supports a subset of the MS1 controller’s features, is prepared for the Xilinx 14.7 ISE Design Suite and available from the Pixblasters GitHub: https://github.com/PixiGreen/Pixblasters-MicroDemo. The open-source FPGA demo features*:

* Pixblasters MS1 board’s daisy-chaining, on-board micro, and some other advanced features are not supported in this demo

DISCLAIMER: The original configuration of the on-board Microchip PIC18F26J50 microcontroller MUST NOT be changed under any circumstances and any change will permanently cease the operation of the Pixblasters firmware. The PCB board and all user-defined FPGA designs will continue to work with no limitations! 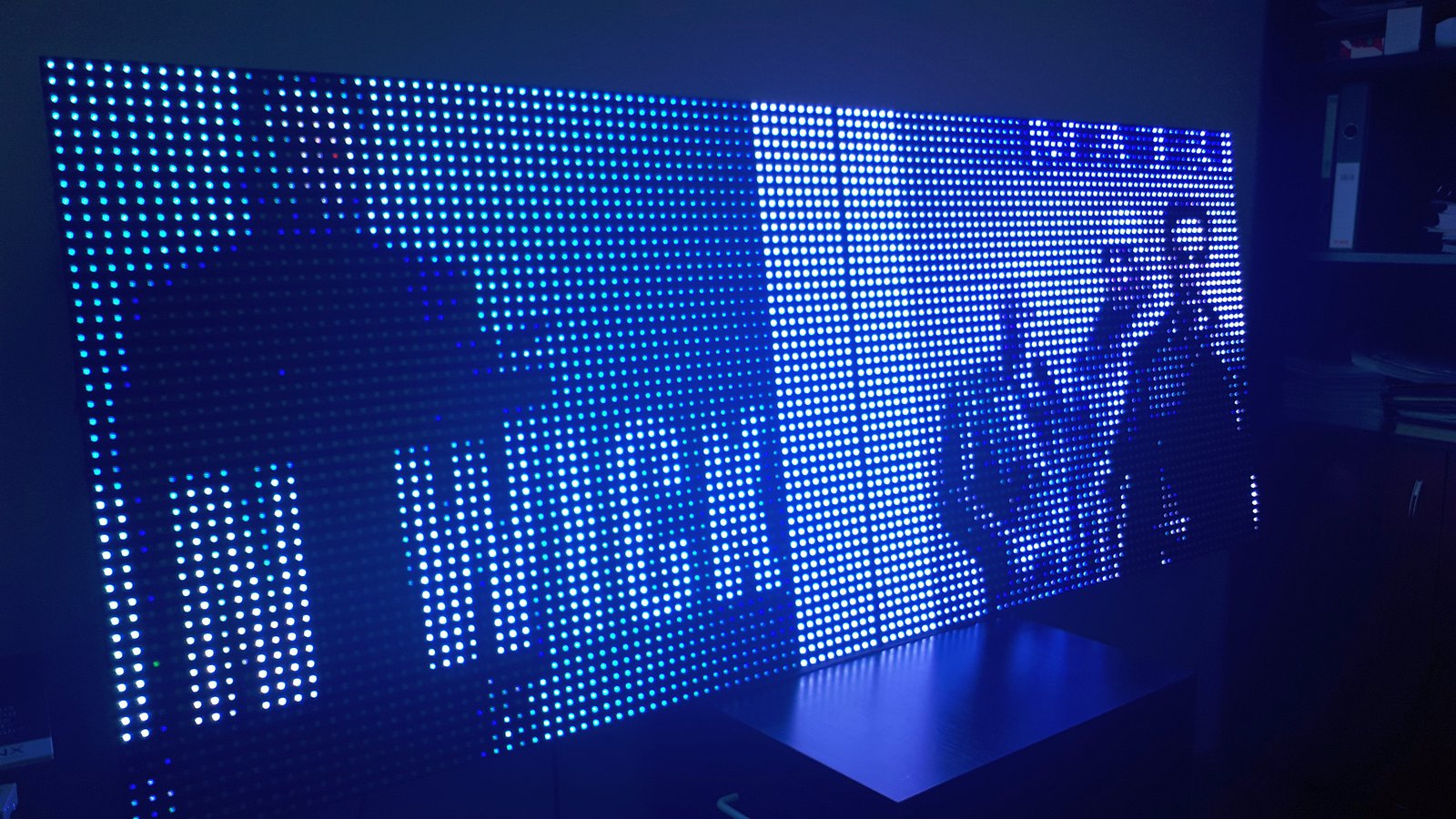 The idea for this project was accidentally born in a random conversation about an independently shared DIY dream. Twenty years ago, both of us were dreaming about building a large video LED screen. At that time it was a difficult undertaking and out of reach to the vast majority of DIY makers.

While red and green LEDs were relatively reasonably priced, the blue LEDs were extremely expensive and locally available for roughly $6/pc. This meant that the LED material bill alone for a relatively small 100 x 50 (H x V) display was around $40,000! That doesn’t even include the LED driver chips, power supply, video engine, etc.

As LED technology has advanced, it has been accepted and incorporated into a wide range of applications. The rise of low-cost and reliable single-board computers like the Raspberry Pi combined with our advanced knowledge of FPGA technologies to create this project.

Produced by Pixblasters in Zagreb, Croatia. 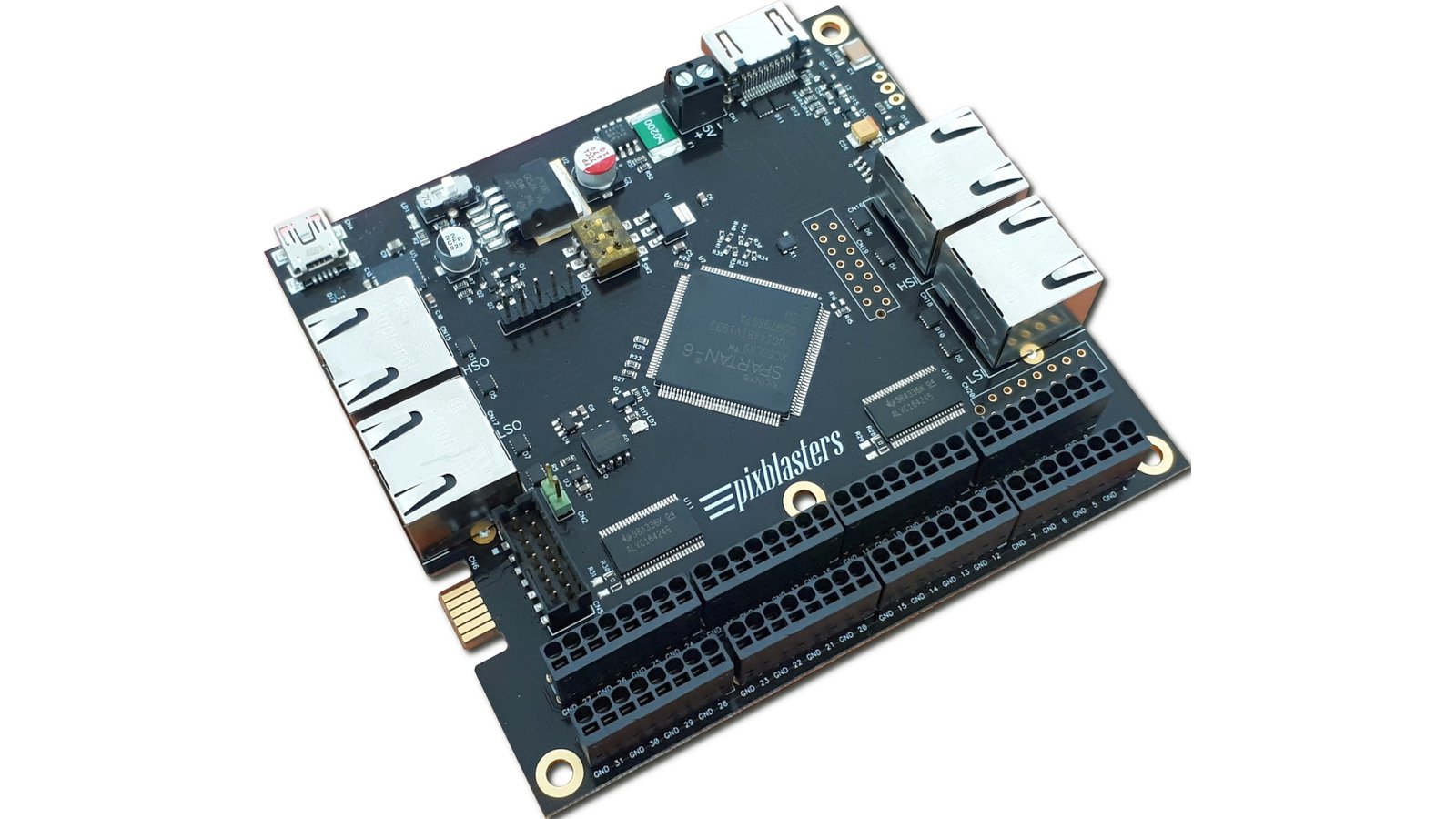 Start building your dream LED display with your own Pixblasters MS1 LED controller. (This item was once named 'Pixblasters Go'.) 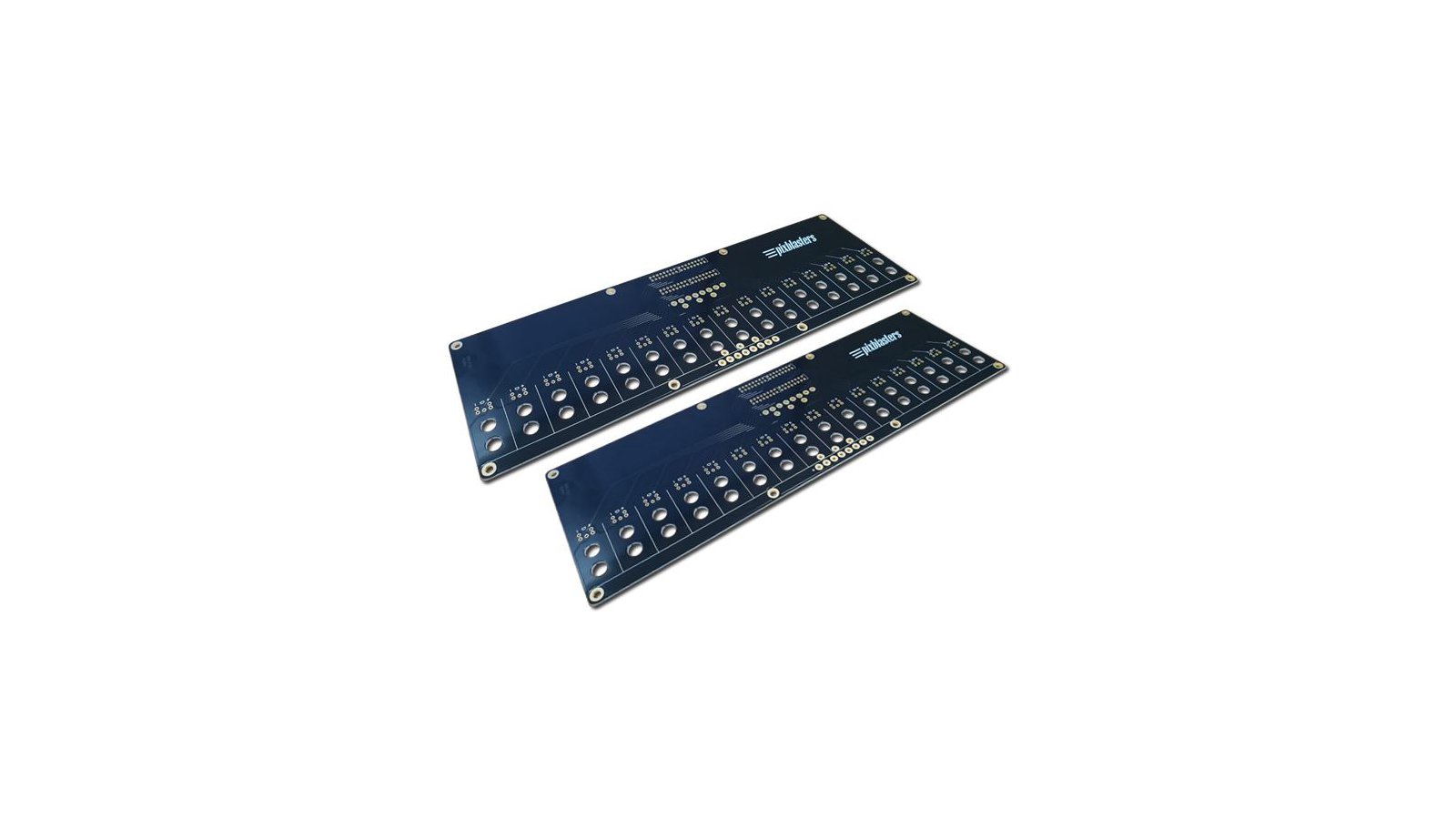 These Array-SL boards enable releasable connections with the Pixblasters MS1 LED controller and easy building of the LED matrix. It distributes the video control signals and the power sourced from an external +5 VDC power supply. Each board includes holes for easy wall mounting. Two boards included for a total of 32 LED strips connections.

We are a dedicated two-man team of FPGA electronics experts with 20+ years’ experience, with the goal of enabling everyone to build and operate immense and responsive high-resolution video LED displays. 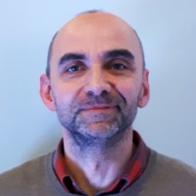 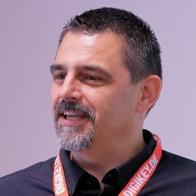 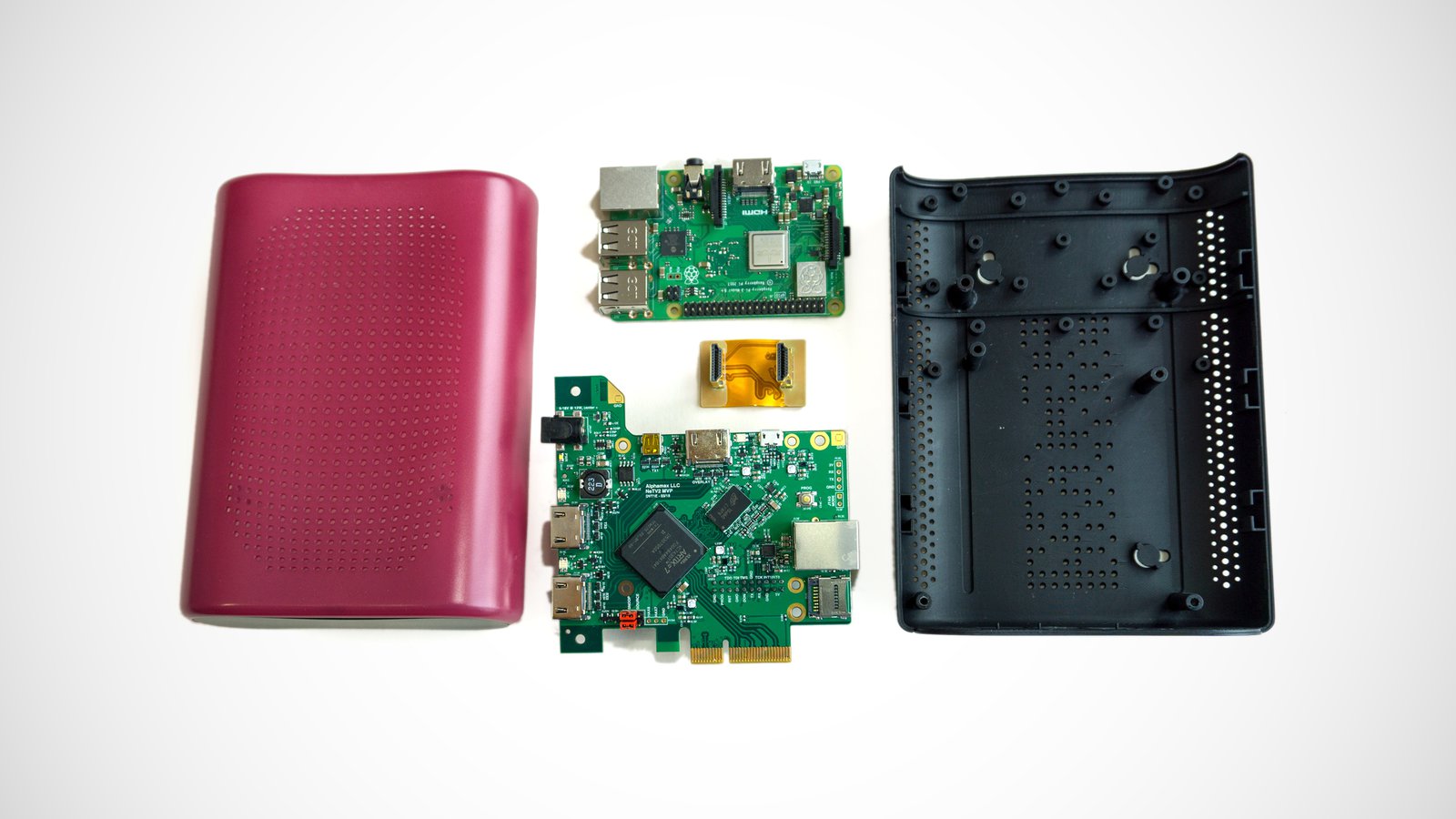 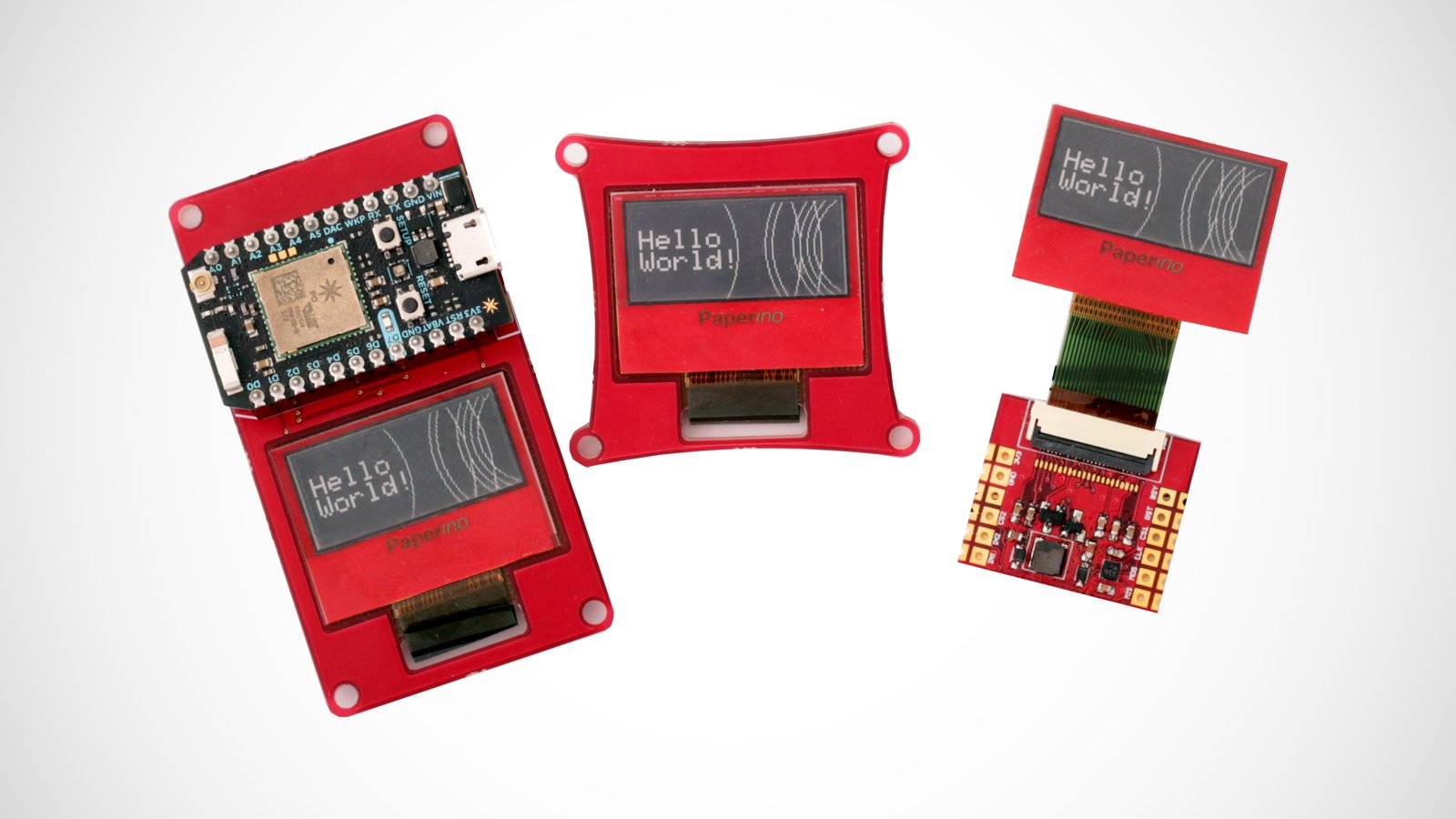