Our Ask Me Anything (AMA) is coming up tomorrow! This is a series that takes place on Crowd Supply’s Discord server. If you have any questions or simply some interest in STEP400 or stepper motors, please join us! I’m nervous about communicating in real time in English, but I’d like to be able to have a casual Q&A session.

The other day, through an unexpected connection, I had the opportunity to speak with someone who works at an industrial stepper motor manufacturing company. This update will be a recap of our chat, and I think it will be very helpful in understanding what STEP400 is and what it isn’t.

Perspective from inside the Tokyo underground electronics scene

In 2005, I was one of the organizers of an event called dorkbot tokyo. We approached people who were "doing strange things with electricity", regardless of genre, and asked them to give presentations or live performances. One of presenters in the first edition was the "Eavesdropping Electric University". He and his friend were writers for a magazine called Radio Life, which was all about hacking, or almost cracking. They were writing about a series of funny electronic experiments.

15 years later, Mr. Eavesdropping Electric University contacted me via email as Mr.Masuda from a motor manufacturing company. Here’s the transcript:

K: Yes, ever since I was asked to appear at the first edition of dorkbot tokyo. 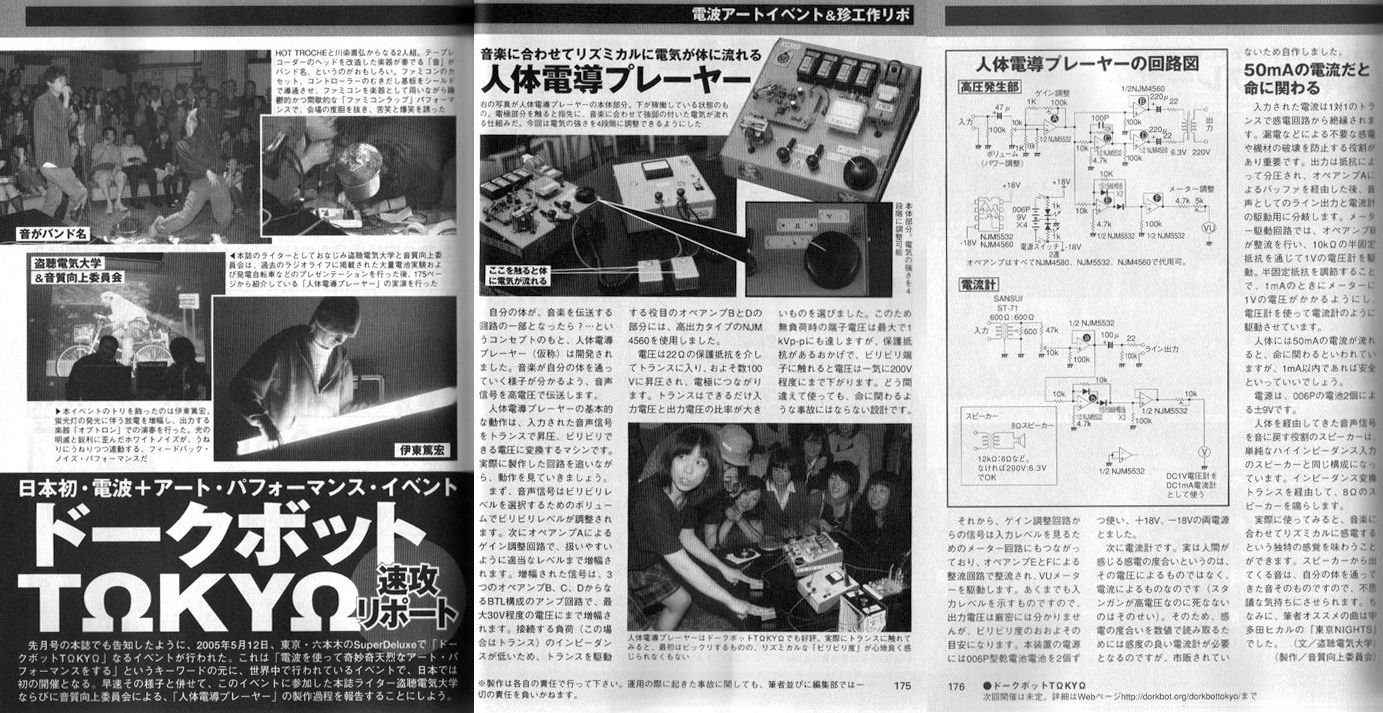 K: I remember you presented an experiment about cycling down Mt. Fuji.

M: Yes, we attached a car generator to a bicycle and loaded it with an inverter that boosts the voltage to 100V and a small rice cooker on the back of the bicycle, and we cooked rice by generating electricity while riding downhill from the middle of the mountain. The result was just exhausting, though.

K: Yes, it didn’t look nicely cooked. Also, I think you were connecting an unbelievable number of AA batteries…

M: Oh yes, we connected about 200 AA batteries and started up a desktop computer. Buying up all the stock from Yodobashi Camera. 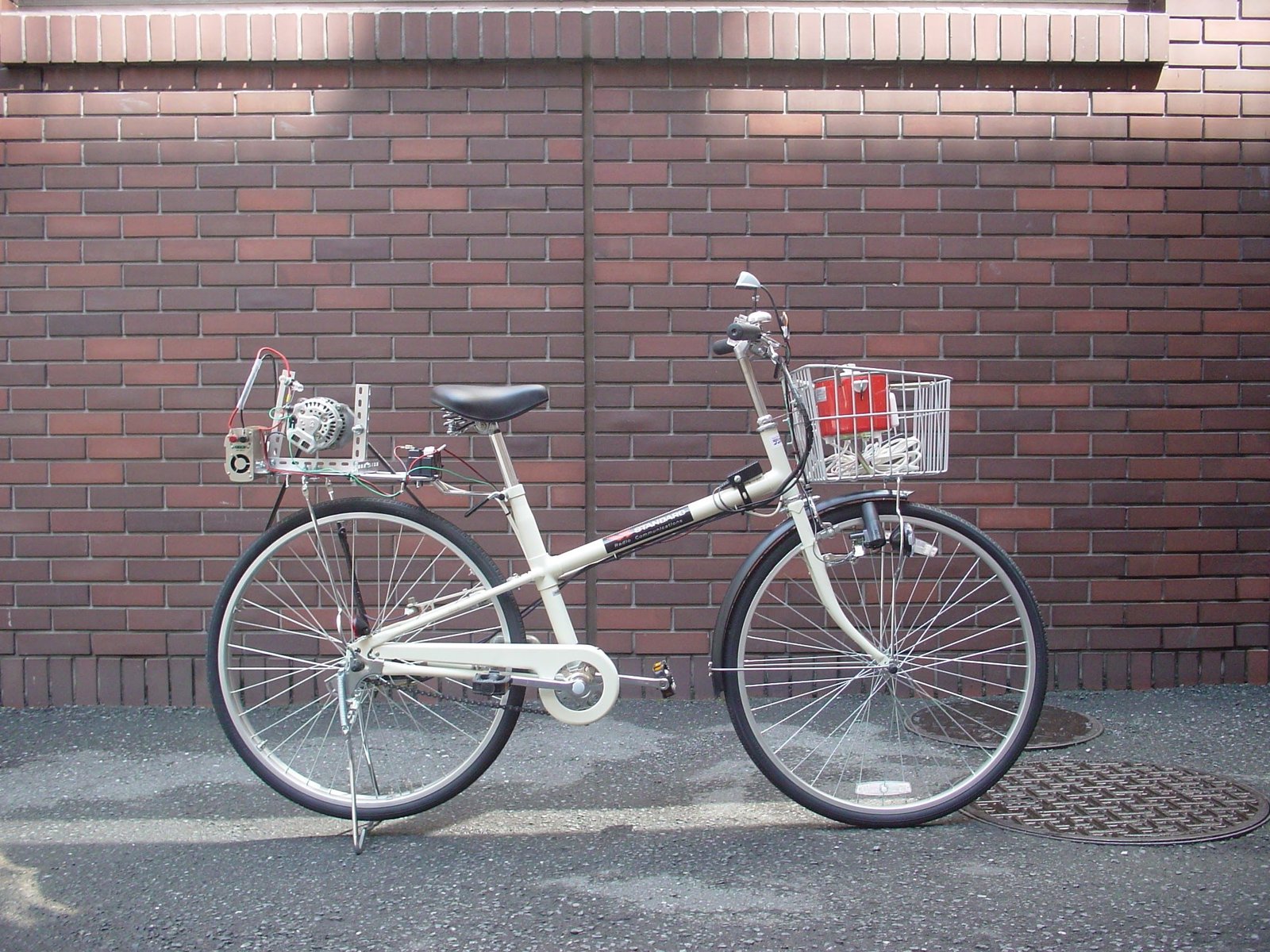 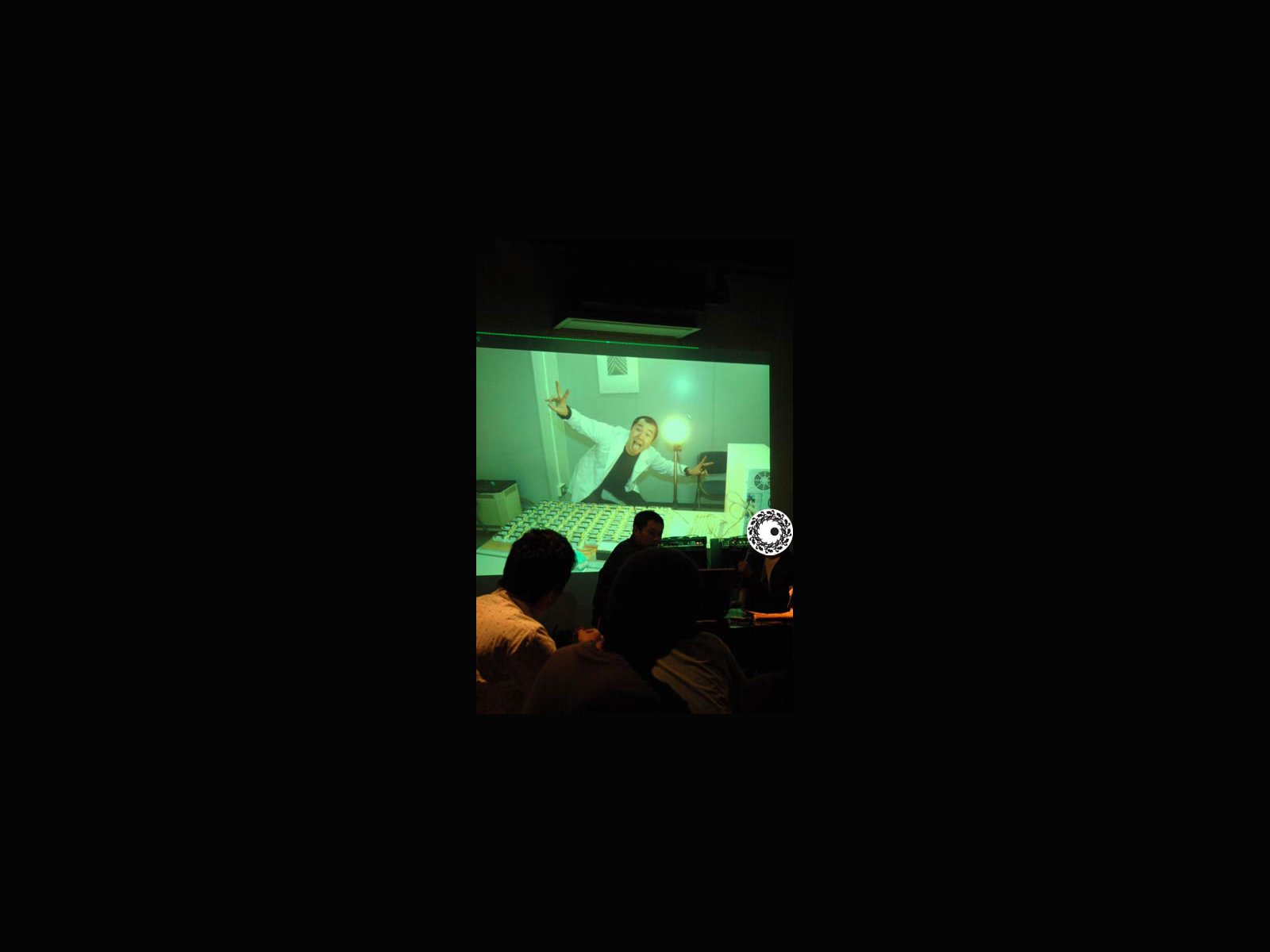 K: It was right before the age of social networking, and it seemed like each scene was more divided than they are now. There was a clear distinction between “maker culture” and “Electric Town culture”.

M: I agree. Mostly PICs and H8s were sold in hobby electronics shops.

K: We never imagined that Arduino would be sold in Electrical Town, did we? I feel like things changed in 2010 or so. The maker movement has accomplished a lot, but I’d like to highlight old-fashioned radio, ham, and audio culture that is disappearing behind it.

Perspective from inside an industrial motor manufacturing company

K: So you are working for a motor manufacturing company now? I was surprised to receive sudden business-like e-mails from you!

M: Yes, actually I’m still doing weird things, but at work. We mainly manufacture motors and drivers for industrial applications for automated production lines, but we’d like to start making products for the general public as well, and we’re looking into possibilities within the fields of hobby electronics or education. I found a product that was pretty close to what we had in mind, and I found out that it was made by Kanta, so I contacted you.

K: That was it! But if a serious manufacturer made this kind of board, we would be blown away immediately. There are a lot of mass-production professionals in your company, aren’t there? I’m jealous!

M: Well, that’s the thing, there are people who do that, but when you get them to design something, the result becomes really expensive and high performance.

K: Oh I see, you mean they get way more proper than necessary, right?

M: Also someone in the company started a discussion about a system for investigating problems. There’s no way to do this at a BtoC (business to customer) business.

M: In industrial applications, when a chip catches fire at a customer’s factory, we send the chip to the semiconductor manufacturer for investigation. Then we spend months scraping the chip package to expose the silicon die, identifying the sources of the problem, getting a report document, and discussing the scope of responsibility.

K: Wow, that’s serious… It would be nice if you could just do something like, "Don’t use it for anything dangerous.”

K: I can see why industrial products are so expensive… Meanwhile, you can find 3D printer drivers or such on Amazon for unbelievably low prices.

M: When we evaluate stuff like Arduino-based drivers with cheap chips, we find that their accuracy is totally horrible in many aspects. But no one is having trouble with that level of accuracy.

K: I usually work on the control of exhibits, and in those fields, sometimes it’s important to keep a lot of things moving within a budget, without paying too much for perfect specifications. It seems to me that the balance between performance and price can vary.

K: Industrial drivers seem to be mostly constant-current driven. We usually use motors for expressive applications, so we always have voltage control for quiet rotation.

M: We had never thought about the use of voltage control and quiet rotation at all.

K: Really! I think that quietness is the best thing about a stepper motor.

M: Basically, it’s designed to be used in a factory, so the noise problem doesn’t really matter. Our understanding is that a stepper motor is always noisy. Since the current in PM models is small, sometimes it can be a bit like voltage control. Basically we don’t use voltage control for HB models, instead, current control that produces torque up to the high speed.

K: What is the difference between a PM model and a HB model?

M: PM is a permanent magnet, a rounded one. It has a sliding bearing (sintered) and is low cost. The square shape one is a HB type, meaning hybrid, which has a smaller step and a ball bearing. But hybrid models have become so popular in many applications, they are no longer seen as the high-class motors they once were. 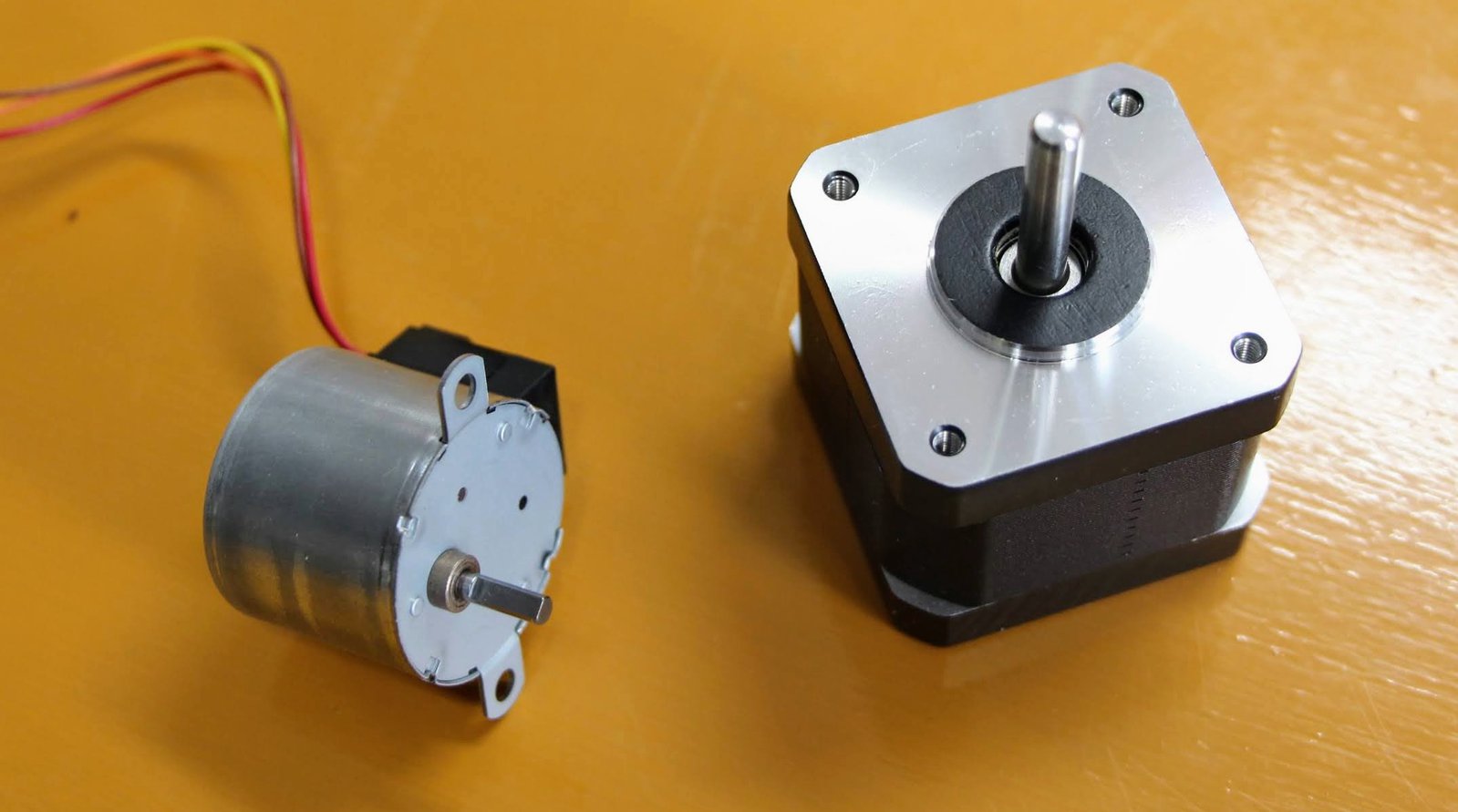 K: Interesting, I didn’t know about that…

K: What device does an industrial motor driver use for higher level control?

M: Our customers tend to use industrial PLCs (Programmable Logic Controller). Because they are handy in a factory for calling up a predetermined motion.

K: The design philosophy is going to be very different in that regard, since many creative applications are interactive and controlled in real time. Some of your drivers are able to communicate, can these make a PC the primary?

M: That’s right, we have an expansion board that uses the PCI bus to produce 4-axis pulses, or we have our own communication standard for controlling many more axes, or an industrial Ethernet one, like EtherCAT.

K: I see. STEP400 is a regular Ethernet UDP, so it doesn’t have the reliability of industrial protocols, but it is much easier to use. It would rarely be impossible to reach on a closed wired network, but it could happen. If this doesn’t cause damage or injury, but just looks a little weird, that level of reliability can be enough. But of course, we use industrial products in the critical situations.

Our nerdy talk went on for the next two hours, but I’ll skip the rest of the story and summarize differences based on what I heard.

Dorkbot is a meeting for people to give presentations on the theme "People doing strange things with electricity", and it started in New York City.

Dorkbot tokyo was held from 2005 to 2009 with Kazuhiro Jo, exonemo and Kanta Horio as the organizers.