Our campaign is ending soon, there is less than three days left to support our campaign and get your very own wESP32! Plus, a Bluetooth Low Energy beacon scanner demo using Arduino!

Since the last update we made up about half the amount remaining to make it to our $15K stretch goal. Can we get a last sprint to the finish to get all the way there before the campaign ends? We shall see. :) Often campaigns have a last spike of orders right before they are over, so there still is a chance. If you can help get the word out, please do so, I really appreciate the help you all provide to this marketing-impaired engineer! :)

A new demo has landed in the wesp32-demos repository: a BLE beacon scanner, written with the help of Espressif’s arduino-esp32! From the start of the campaign I wanted to have a demo that would demonstrate a useful combination of wired and wireless that the wESP32 can provide. Now I finally have one!

As has been the case with several other demos, credit for the heavy lifting in this one goes to another member of the ESP32 community on whose code I based this example. Some of the adjustements I made were getting rid of unnecessary sleep modes for clarity (we have PoE power), getting rid of WiFi management stuff (all we need to do is start Ethernet) and replacing the std::stringstream stuff with Arduino String (for some unknown reason I was getting 0x00 POST data with the former and sometimes crashes).

The code does a 10 second BLE advertisement packet scan and collects the data, then formats it as a JSON string and sends it to an HTTP server. It keeps doing this over and over. For demo purposes, a tiny Flask based server is included that catches the data and prints it, but the Arduino example works without it and prints data to the console as it finds beacons. 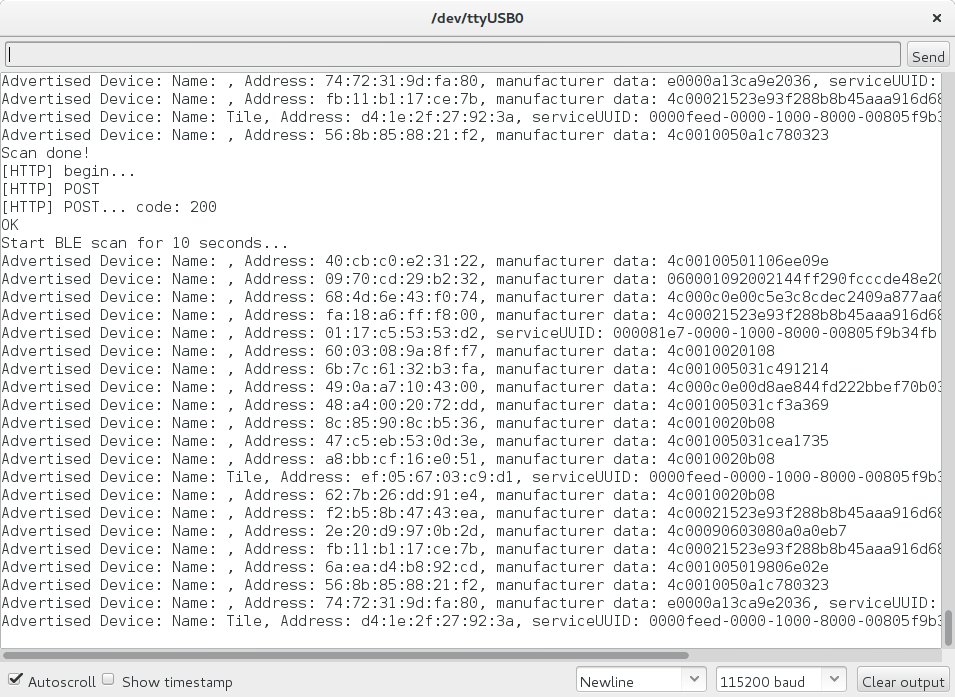 This is one of the few examples that shows useful functionality of the wESP32 by itself, without having to connect extra hardware. Load the demo project, put the wESP32 in a box, connect Ethernet and you have a complete BLE beacon scanner!