We finally received the boards produced by TRO-GRIM, the CM in Mexico I was trying. Unfortunately, the results are not what I was looking for.

As you may recall, I was trying different contract manufacturers with a view to scaling up production. I was looking not only for cost reduction, but also for someone to take on full assembly including through-hole parts, since doing those myself presents a bottleneck for volume production. So I tried TRO-GRIM in Mexico, and the first goal (cost reduction) was immediately blown by Mexican customs.

Now I received the boards, it has become obvious the second goal of spending less of my time per board is also not going to happen this round. To be blunt, they delivered very shoddy work, and I have to spend a lot of time to turn the results into acceptable products. I guess I should have become suspicious when they insisted I pay 100% in advance instead of 50% before and 50% after delivery. I’m sure they realized I might not have been willing to pay full price for the shoddy work they did!

The first thing I noticed when I opened the box was that it was dirty inside. There was all kinds of particulate matter in it. Then I noticed that the packaging of 8 panels was marked. I found out they were marked because those panels had components missing! I was never informed that they had component shortages and would be shipping incomplete panels. Also, the pattern of missing components is very odd. You’d expect that there would be a couple of panels that have several parts missing at the end of the production run. But this is more like one panel has one part missing, and another panel has a different part missing but has the first part populated. Very random. I also noticed that they didn’t return the left over components as they had said they would. I tried to ask them about it but have received no response.

When I started looking at supposedly "good" panels and found more issues.

What I noticed first when I started processing these was how dirty the boards were. Most of them seem to have a tacky, waxy coating all over them. I had complained about this when I had received first article and I had been assured that they would clean the boards better. They didn’t. If anything, these boards are worse. 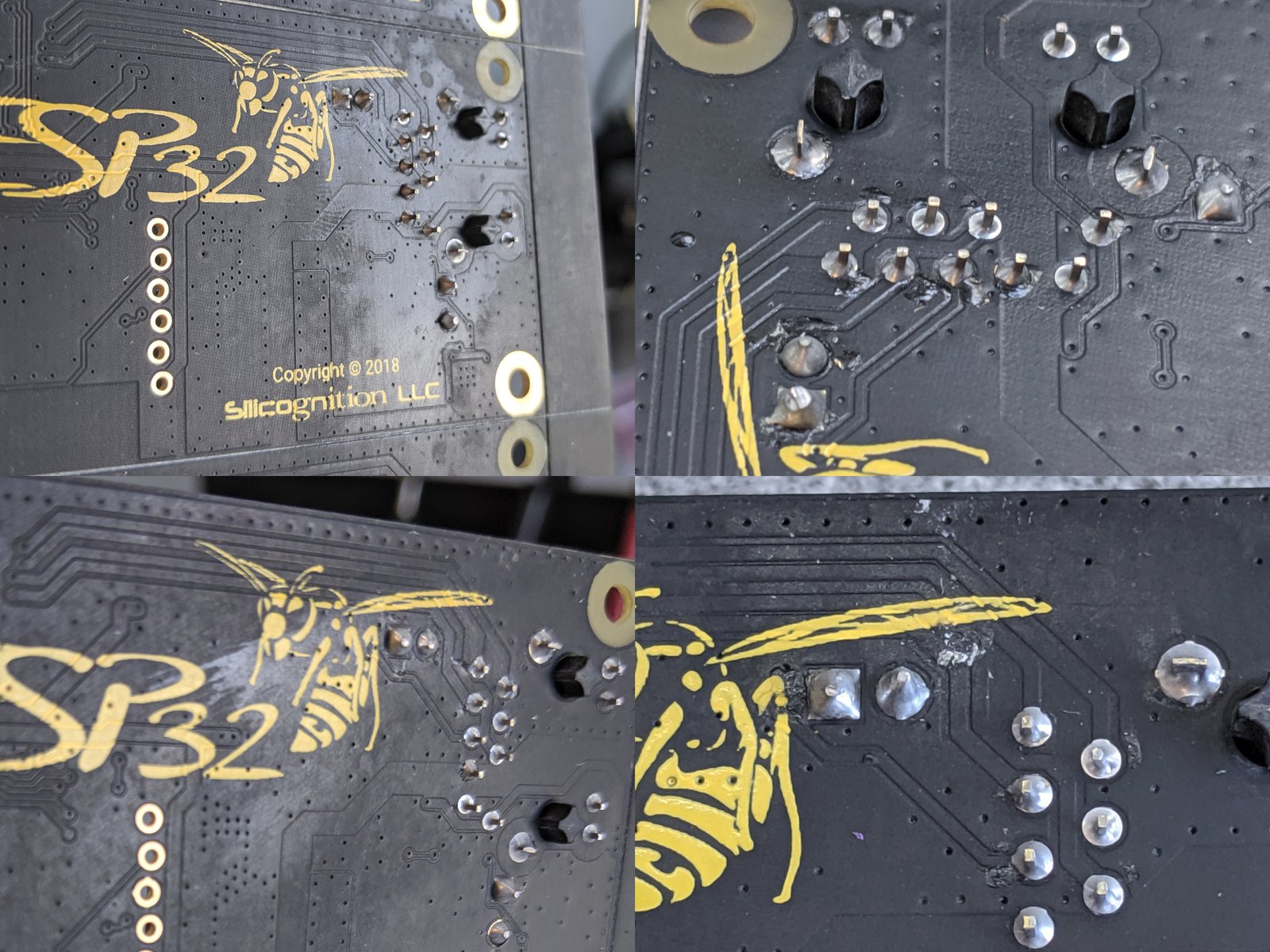 Most boards look like the two images on the left, where someone may have wiped at them but they are definitely not clean. The tacky feel all over makes me think maybe they were thrown in an ultrasonic bath with solvent that was already saturated with flux, which was deposited all over the boards. For some boards, like the one on the top right, it looks like no attempt at all was made to clean up the flux residue after soldering. This is actually better, as overall there’s less flux to clean up for me so cleanup is faster. And then there are some like the one on the bottom right where no attempt was made to even clean up random solder slop stuck on the board (not even considering how you get solder in random places like that).

As I processed more boards, I because appalled at how much damage I found! 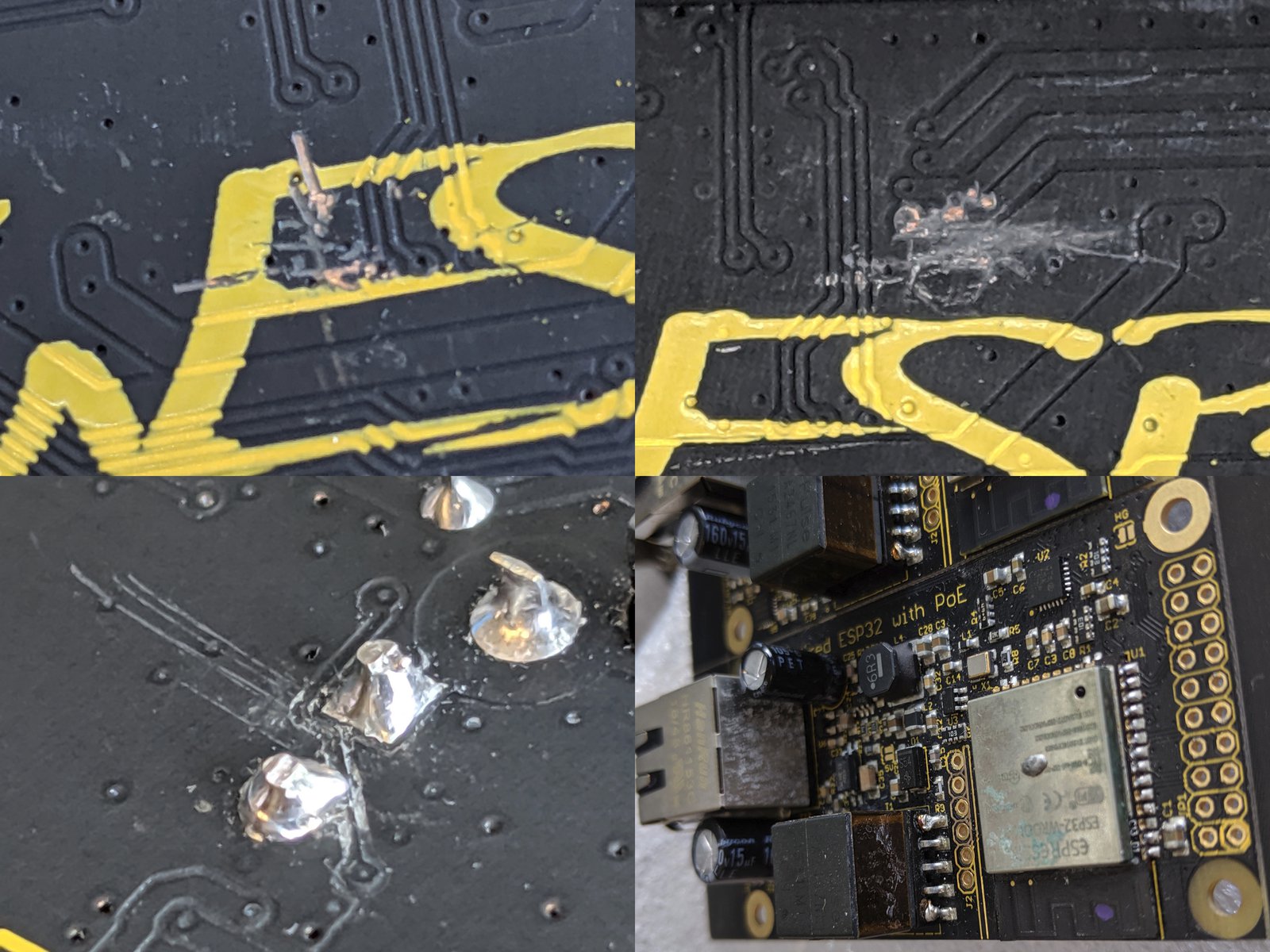 I can’t imagine what happened in the top two images. How do you get the deep gouges in the one on the left, and what were they trying to scrape off in the one on the right? The bottom left looks like a pretty lousy soldering job, and someone felt the need to dig the iron into the solder mask repeatedly. And the bottom right image is the ugliest thing ever. How do you get the ESP32 EMI shield to corrode like that?

None of these boards are suitable to be sold to customers as new product, even after cleaning. Of the 100 boards I have processed up till now, 5 had damage that made them unsuitable to be shipped. Many more had light scratches that luckily weren’t deep and weren’t noticeable after cleaning.

As I went through the first 100 boards, it became obvious that I would not only be spending a lot of time cleaning dirty boards, but also reworking defective boards. In the end, only 68 of them worked right away! That’s a horrible yield number. 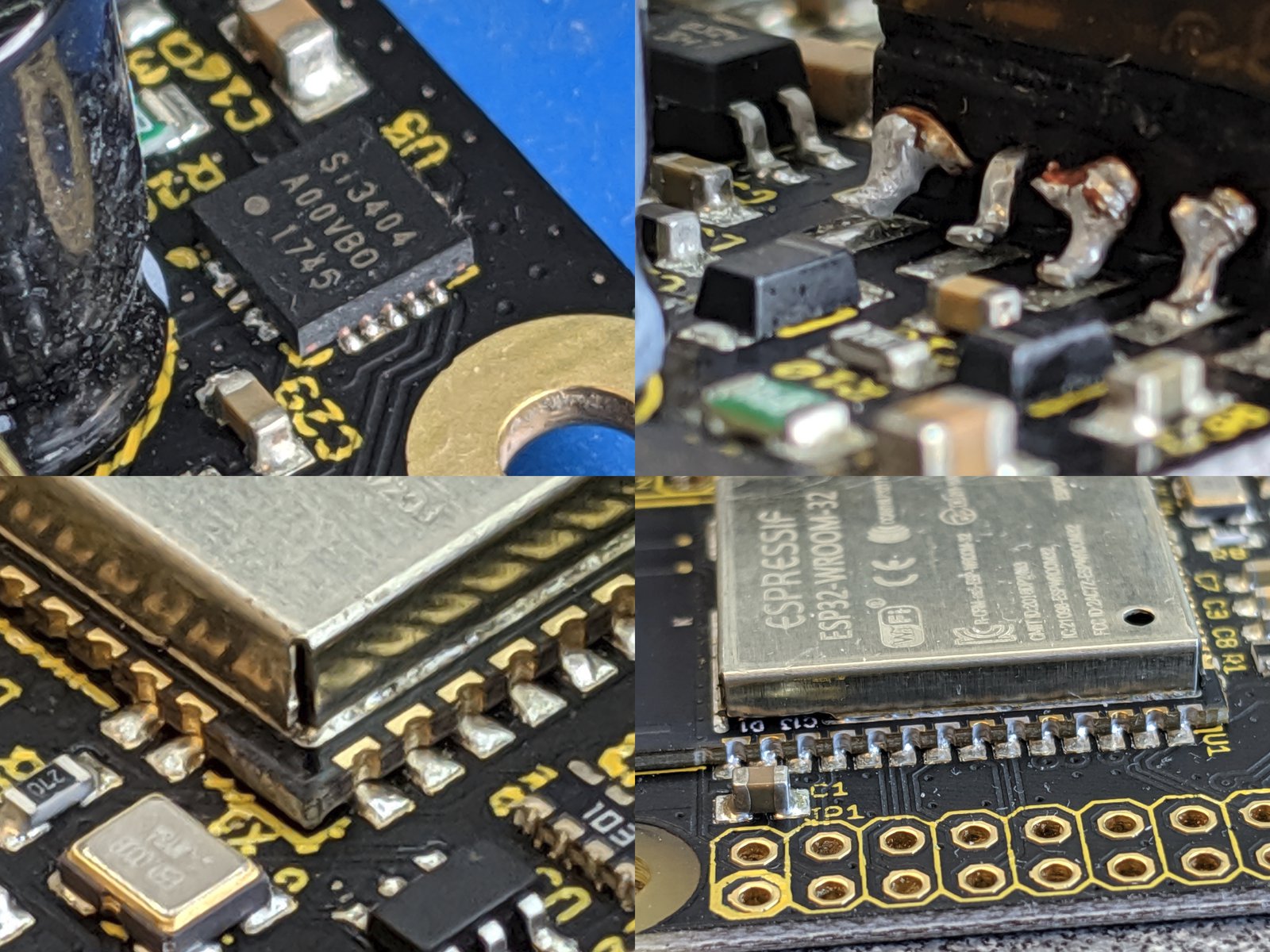 When I initially had contacted TRO-GRIM, they had assured me they had no issue with fine pitch QFNs. The results tell another story. Of the 100 board, 16 had a problem with the PoE chip as shown in the top left image and 8 needed to have the Ethernet PHY chip fixed. There were also 15 boards that had issues with reflow and positioning of the ESP32 module as shown in the bottom 2 images. These cause ESP32 pins to not be connected or to be shorted. The module shifted as in the bottom right image is the worst, since I don’t have the equipment to fix these myself.

Then there was the oddball problem in the top right image. The only way I can imagine this happening is if someone dropped the flyback transformer on the floor, causing the pins to bend, and then they just put it on without straightening the pins first.

What does this mean for the project?

Not much, to be honest. At least not for you as a backer or customer. We have plenty of good stock ready to ship. For me, it means I didn’t succeed in finding a CM that can help me scale up production as I’ll obviously never ever use TRO-GRIM again. It also means that I’ll be spending more time than anticipated cleaning and reworking this stock, and that some units will have to be scrapped or sold at reduced cost in the Tindie Flea Market section. So it may be an opportunity for customers since you may be able to pick up a bargain if you don’t care about how it looks! ;)

Bottom line is: you can rest assured that we thoroughly clean and test all boards before they are shipped to Crowd Supply for distribution. So you can feel confident that the product you receive will be beautiful and functional as always. :)

As I mentioned in a previous update, I was impressed with the job KingTop Technology did with my LiFePO4wered/Solar1 boards, so I have contacted them to run the next round of 1000 boards. Since most of my current production is already spoken for, I have already kicked off the third production round by placing an order with Hanrun to be drop-shipped to KingTop for assembly. KingTop has given me a quote which I’m processing to see if there are any other parts I will be sourcing myself to have drop-shipped. The idea is that everything will go to the CM directly and we’ll only need to worry about customs and tariffs when the assembled product is delivered to me.

Let’s hope this attempt to streamline my production process will work out better than the Mexico fiasco! :)