Crowd Supply informed me they have a new thing called Field Reports. The idea is that as backers use a product, they can share their awesome creation and give other people ideas for how a product might be used. In return, your field report may be selected to be featured in a project update and you will even get Crowd Supply store credit! It truly is a win-win for everyone. So head over to the Field Reports submission form and let us know what you are creating with your wESP32!

Yes, you can now buy the wESP32 on Mouser! This is seriously awesome—never in a thousand years had I imagined the day would come when I would see my own products on a large distributor’s site like that. Many thanks to Crowd Supply for making this happen, it literally took zero effort on my part. And it provides a great way for international customers to buy a wESP32 with minimal fuss.

I have been working through the TRO-GRIM manufactured stock, and as was expected, it’s been a slow process requiring lots of cleaning and rework. But we’re getting through it and more finished stock will be on the way to Crowd Supply soon.

In the mean time, I have ordered the next batch of 1000 units from KingTop Technology. Up to now, this has been a very good experience. Andy has been very accommodating and communicative throughout the whole process. I had them source most of the BOM parts. They took care of creating the PCB panels and a wave soldering tool. I had Hanrun drop ship the Ethernet jacks and PoE flyback directly to their factory.

When it was time to start production, they arranged a first article inspection over Skype and gave me a virtual factory tour. I was very impressed with what I saw. They seem to have state of the art equipment and can handle PCBs with 3 mil trace width and spacing, and assembly down to 0201 parts, BGAs down to 0.35 mm pitch and they have an x-ray machine for BGA inspection. Having such a capable manufacturing partner opens prospects for future projects.

For the here and now, I was very excited to see they have a machine for solder paste application. Consistent, high quality solder paste application goes a long way in preventing the manufacturing issues I have been seeing up till now. With their capabilities, assembly of the wESP32 should be a walk in the park comparatively, and it gives me high hopes of getting excellent yield with minimal fuss this round.

The through hole components are wave soldered, and they use a custom tool that prevents the unused pads from being soldered in the process. This should also result in nice, consistent results. Below are some pictures they sent me of a couple of panels that went through their complete process. 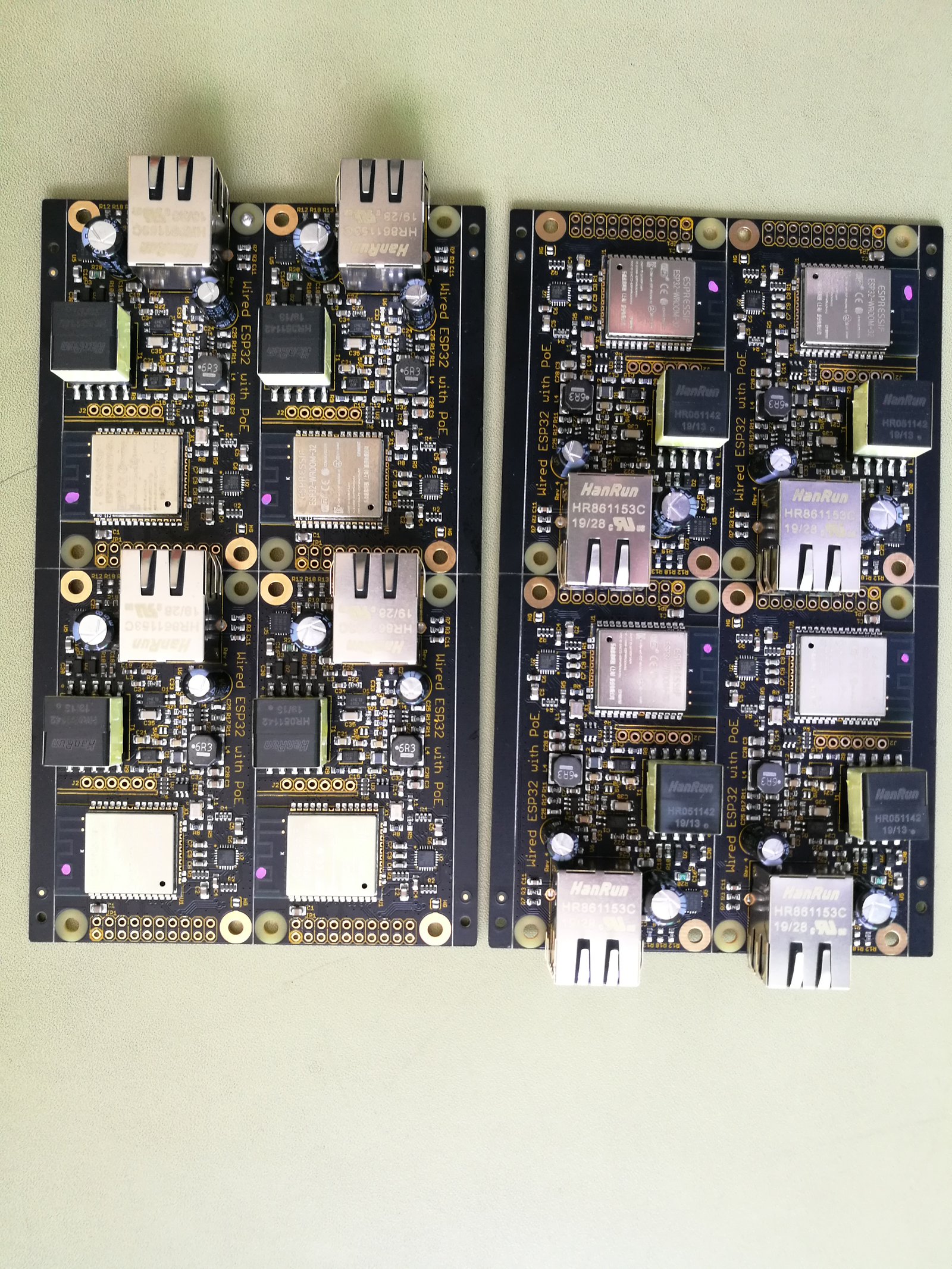 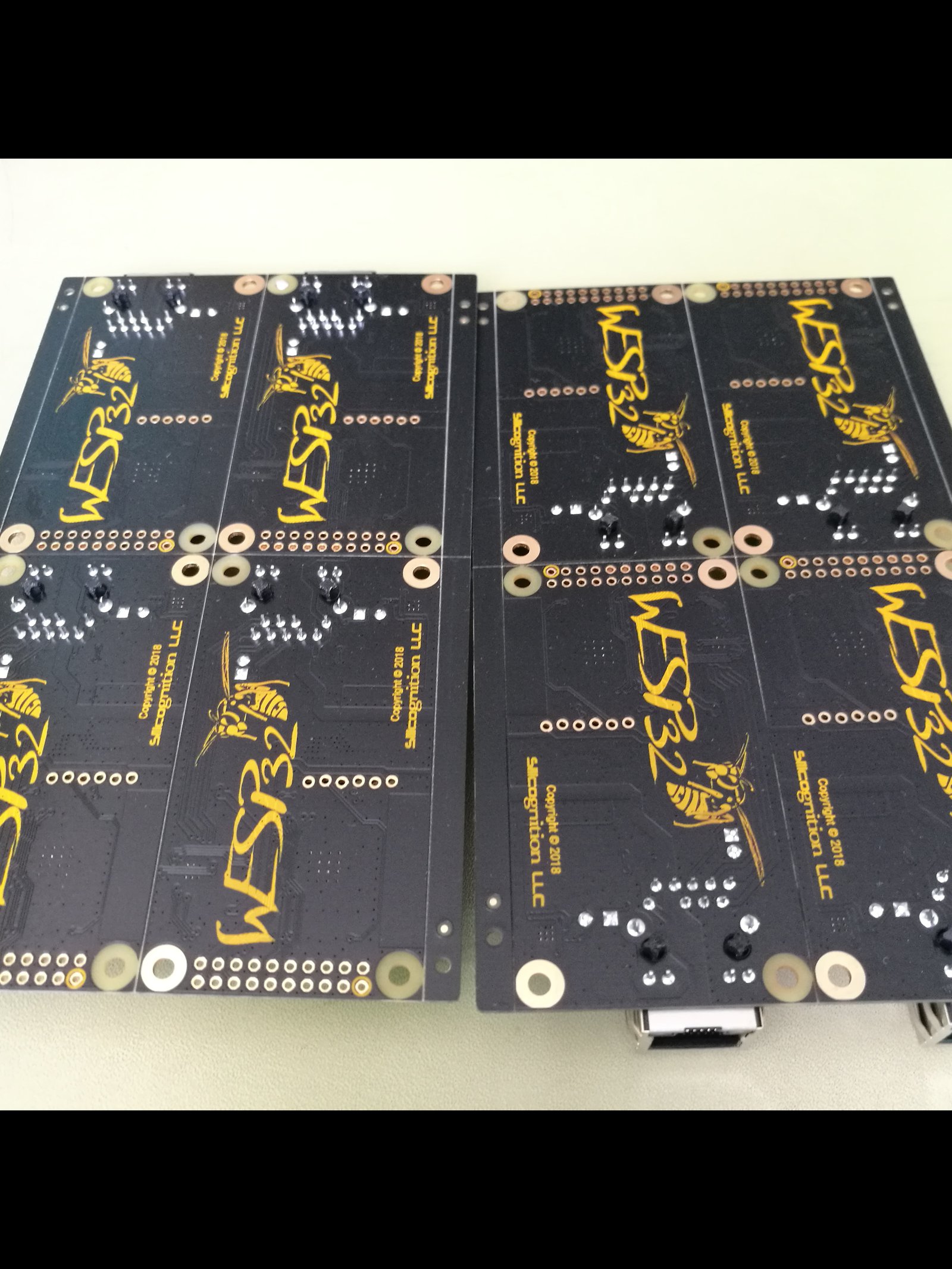 KingTop is also doing limited testing by plugging each board into a PoE switch and confirming the Ethernet jack LEDs come on. This is not a complete test but it should catch most of the issues I have been having with boards manufactured by other CMs up till now. It confirms the PoE subsystem is working and the Ethernet PHY is alive. For now, I’m still going to do programming and final test in-house, since the test fixture is still a bit flaky. But I’m hoping to have KingTop do that in the future as well.

Overall, the way the numbers look right now, we may also have achieved a cost reduction, which was one of my goals. But of course the big question at the moment is if I’ll have any savings left once I pay the Trump tax when the boards enter the country. We’ll see. As the very least, I have high hopes of having to spend a lot less time on each board this round.