One of HackEEG’s super-powers is speed. Because it has a wired USB connection to a host computer like a laptop or a Raspberry Pi, it can read and transfer data much faster than many other EEG devices – its top speed for 8 24-bit channels is almost 16,000 samples per second, and it can send this data over the network using Lab Streaming Layer at that speed. Because of the wired connection, this also means you need to use care while using it– it’s not a device for consumers, since you need to make sure you’re only using HackEEG while on battery power, or build your own wireless battery-powered unit.

HackEEG can read data from the ADS1299 at up to 16,000 samples per second. That should make it useful for people who want to experiment with neurofeedback and qEEG – quantative EEG that processes the input from many electrodes. While there’s not a lot of open source software that can do that right now, if you’re interested in this, it’s possible with HackEEG. 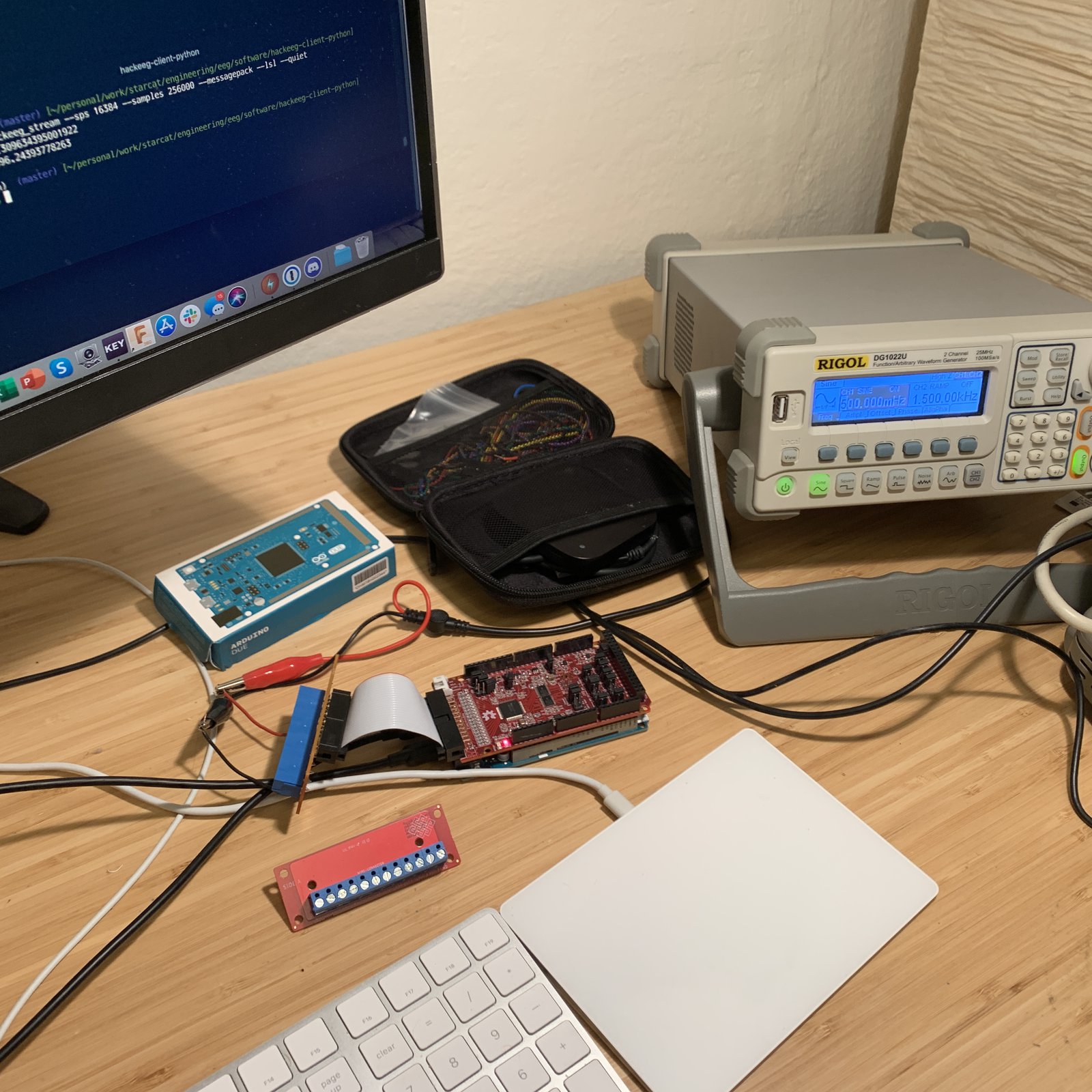 HackEEG testing setup hooked up to a signal generator

This is a testing set-up, HackEEG and an Arduino Due hooked up to a Rigol signal generator.

We’re going to use the HackEEG command line streaming program for this, hackeeg_stream - this program allows you to connect to the HackEEG hardware, configure it, and stream data.

You’ll need Python 3.6 or greater. Do the following:

For more info, including how to install pipenv if you don’t already have it, see the HackEEG documentation.

We can use the hackeeg_stream command, here we’re capturing 4 samples, each with 8 channels of data from the HackEEG and printing it to the terminal:

You can see the driver timestamps each sample, and also numbers each sample. That’s how we can tell if the client is dropping samples. Python is a bit of a resource hog, so to really do this test you need to quit most of the other applications on your laptop, to make sure all the CPU power is available to the streaming program. Later in the campaign I’ll be releasing a rust streaming client that will use many fewer CPU resources.

How does it work? SPI DMA!

How does this work? It doesn’t seem possible at first glance. Arduinos aren’t very powerful. But it is possible. First of all, you need a powerful laptop to run Python at high speed to read the data via USB 2.0. The test was done on a 2017 MacBook Pro with a 2.9 GHz Intel Core i7 with 16GB RAM. The data streaming uses Message Pack data format which is extremely compact and has highly-optimized software, both on the Arduino Due driver side and the Python side. And for this purpose, the Arduino Due has some special powers– we are using SPI DMA.

What does that mean? DMA means Direct Memory Acccess – the TI ADS1299 EEG-on-a-chip is attached to the Arduino Due by something called SPI - Serial Peripheral Interface. It’s a fairly fast, simple serial connection between computers and peripherals. Normally the Arduino has to use its CPU to read the data, which is both slow and also uses up CPU time that could be used for doing other things, like formatting data and communicating with the laptop or other client. But the Arduino Due is special – unlike a some other Arduinos, it has a DMA controller. This is a special-purpose on-chip unit, part of its Microchip ARM-powered SAM3X8E system-on-a-chip, that can read SPI data and put it in the Arduino Due’s memory without the CPU having to do anything. This doubles our speed, and is what allows us to go so fast on the Arduino Due.

SPI DMA is not part of the stock Arduino Due software. But since I needed it, I found some SAM3X8E SPI DMA code, and updated and debugged it to work wth the Arduino Due especially for the HackEEG driver. It’s in the HackEEG driver software repository, see the link below for the code. I’ll release it as an Arduino Due library for general use later in the campaign.