Bringing Up TLS on Precursor

The pace of development has slowed down a bit as the late summer set in and we took some holidays to rest and recharge. However, over this period, we did manage to accomplish one major new feature that is now available to developers: TLS support, via rustls. This was a fairly big barrier to cross, because the “go-to” Rust library for TLS, rustls, uses ring for its cryptography. ring is in large part an FFI wrapper around a whole lot of assembly and C code that is very platform specific and lifted out of BoringSSL. The introduction of assembly in C would mean we’d have to pull in gcc, nasm, and perl to build Xous, breaking with our goal of keeping the code base pure Rust.

We really did not want to pull those tools into our SBOM, and for a while it seemed dicey for us to integrate rustls into Xous. Fortunately, Ellen Poe (ellenhp) reached out to me in response to an earlier update, and informed me that she had introduced a patch which adds RISC-V support for ESP32 targets to ring, and that this is now being maintained by the community as ring-compat. Her community graciously tried another go at submitting a pull request to get this patch mainlined, but it doesn’t seem to have made much progress on being accepted.

Having more or less wrapped up work on the vault app, I was ready to put my full effort into figuring out the TLS issue. Our options were:

WolfSSL is appealing, as it is a well-supported TLS implementation precisely targeted toward light-weight clients that fit our CPU profile: I was confident it could meet our space and performance metrics, if we could only figure out how to integrate the package. Unfortunately, it is both license and language incompatible with Xous, which would require turning it into a stand-alone binary for integration. This would also reduce efficiency of the code, because we would have to wrap every SSL operation into an inter-process call, as the WolfSSL code would be sandboxed into its own virtual memory space. Furthermore, it introduces a C compiler into our SBOM, something we had endeavoured to avoid from the very beginning.

Writing our own crappy TLS implementation is just a patently bad idea for so many reasons, but, when doing a clean-sheet architecture like ours, all options have to stay on the table.

This left us with one clear path: trying to patch over the ring FFI code with pure Rust versions.

The first waypoint on this journey was to figure out how ring-compat managed to get RISC-V support into ring. It turns out their trick only works for ring version 0.17.0 – which is an unreleased, as-of-yet still in development version.

Unfortunately, rustls depends on ring version 0.16.20; ring version 0.16.20 uses C code derived from BoringSSL that seems to be hand-coded, but carefully reviewed. So, even if we could get ring-compat to work for our platform, it still would not work with rustls, because 0.17.0 != 0.16.20.

I took a closer look at the major differences between ring 0.17.0 and 0.16.20. There were enough API-level differences that I would have to fork rustls to use ring 0.17.0.

However, if I pushed one layer deeper, within ring itself, one of the biggest changes is that ring’s “fipsmodule” code changes from the original, hand-coded version, to a machine-generated version that is derived from ciphers from the fiat-crypto project (NB: “Fiat Crypto” has nothing to do with cryptocurrency, and they’ve been at it for about as long as Bitcoin has been in existence. As they say, “crypto means cryptography”: fiat cryptography utilizes formal methods to create cryptographic ciphers that are guaranteed to be correct. While provably correct ciphers are incredibly important and have a huge positive benefit, they don’t have a “get rich quick” story attached to them and thus they have been on the losing end of the publicity-namespace battle for the words “fiat” and “crypto”). Because their code is machine-generated from formal proofs, they can more easily support a wide variety of back-ends; in particular, in 0.17.0, there was a vanilla C version of the code made available for every architecture, which was key to enabling targets such as WASM and RISC-V.

This was great news for me. I proceeded to isolate the fipsmodule changes and layer them into a 0.16.20 base (with Ellen’s patch applied); this was straightforward in part because cryptography APIs have very little reason to change (and in fact, changing them can have disastrous unintended consequences).

Now, I had a rustls API-compatible version of ring that also uses machine-generated, formally verified pure C code (that is: no more bespoke assembly targets!) with a number of pathways to achieve a pure Rust translation.

Perhaps the most “correct” method would have been to learn the entire Fiat Crypto framework and generate Rust back-ends from scratch, but that does not address the thin layer of remnant C code in ring still required to glue everything together.

Instead, Xobs suggested that we use c2rust to translate the existing C code into Rust. I was initially skeptical: transpilation is a very tricky proposition; but Xobs whipped together a framework in an afternoon that could at least drive the scripts and get us to a structure that we could rapidly iterate around. The transpiled code generated literally thousands of warnings, but because we’re transpiling machine-generated code, the warning mechanisms were very predictable and easy to patch using various regex substitutions.

Over the next couple of days, I kept plucking away at the warnings emitted by rustc, writing fix-up patches that could be automatically applied to the generated Rust code through a Python script, until I had a transpilation script that could take the original C code and spit out warning-free Rust code that integrates seamlessly into ring. The trickiest part of the whole process was convincing c2rust, which was running on a 64-bit x86 host, to generate 32-bit code; initially all our TLS tests were failing because the bignum arithmetic assumed a 64-bit target. But once I figured out that the -m32 flag was needed in the C options, everything basically just worked! (hurray for rustc’s incredibly meticulous compiler warnings!)

The upshot is now we have a fork of ring in ring-xous that is both API-compatible with the current rustls version, and uses pure Rust, so we can compile TLS for Xous without need of gcc, clang, nasm, or perl.

But Is It Constant Time?

One note of caution is that the cryptographic primitives used in TLS are riddled with tricky timing side channels that can lead to the disclosure of private keys and session keys. The good news is that a manual inspection of the transpiled code reveals that most of the constant-time tricks made it through the transpilation process cleanly, assuming that I interpreted the barrier instruction correctly as the Rust compiler_fence primitive. Just to be sure, I built a low-overhead, cycle-accurate hardware profiling framework called perfcounter. With about 2 cycles of overhead, I’m able to snapshot a timestamp that can be used to calculate the runtime of any API call.

Inspired by DJB’s Cache-timing attacks on AES paper, I created a graphical representation of the runtimes of both our hardware AES block (which uses a hard-wired S-box for lookups, and is “very” constant-time) and the transpiled ring AES code (which uses program code that can leak key-dependent timing information due to variations in execution speed) to convince myself that the constant-time properties made it through the transpilation process. 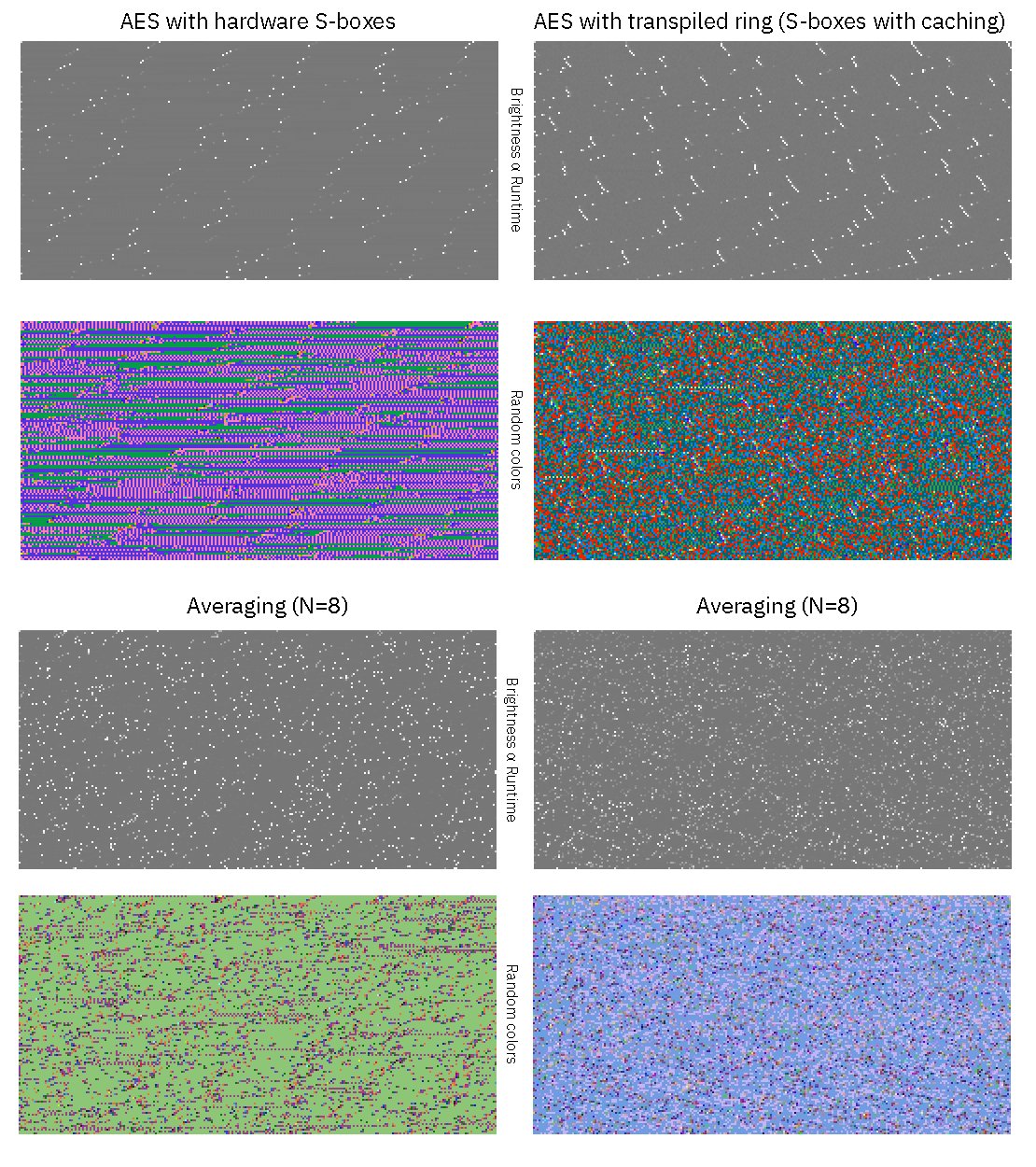 Each graphic above shows a plot of runtime versus 256 keys (horizontal axis) versus 128 data values (vertical axis) (similar to figure 8.1 in the above-cited paper). In the top row, brightness corresponds to runtime; the bright spots correspond to periodic OS interrupts that hit in the middle of the AES processing routine. These bright spots are not correlated to the AES computation, and would average out over multiple runs. The next lower row is the exact same image, but with a random color palette, so that small differences in runtime are accentuated. Under the top 2x2 grid of images is another 2x2 grid that corresponds to the same parameters, but averaged over 8 runs.

Here we can see that for the AES with hardware S-boxes, there is a tiny bit of texture, which represents a variability of about 20 CPU cycles out of a typical time of 4168 cycles to encrypt a block; this variability is not strongly correlated with key or data bit patterns. For AES with transpiled ring code, we see a lot more texture, representing about 500 cycles variability out of a typical time of 12,446 cycles to encrypt a block. It’s not as constant time as the hardware S-boxes, but more importantly the variance also does not seem to be strongly correlated with a particular key or data pattern over multiple runs. More work is necessary to thoroughly characterize this, but it’s good enough for a first cut; and this points to perhaps optimizing ring-xous to use our hardware AES block for both better performance and more robust constant-time properties.

Given that Precursor is primarily a client and not a server for TLS, leakage of the session key is probably the biggest concern, so I made checking the AES implementation a priority. However, I also have reason to believe that the ECDSA implementation’s constant time hardening should have also made it through the transpilation process.

That being said, I’d welcome help from anyone who can recommend a robust and succinct way to test for constant time ECDSA operation. Our processor is fairly slow, so at 100 MHz simply generating gobs of random keys and signing them may not give us enough coverage to gain confidence in face of some of the very targeted timing attacks that exist against the algorithm. Another alternative could be to pluck out every routine annotated with “constant time” in the source code and benchmark them; it’s a thing we could do, but first, I’m still not sure this would encompass everything we should be worried about, and second, it would be a lot of effort given the number of routines with this annotation. The ideal situation would be a Wycheproof-style set of test vectors for constant time validation, but unfortunately the Wycheproof docs simply say “TBD” under Timing Attacks.

ring-xous is a fork of ring that is compatible with rustls (that is, it uses the 0.16.20 API), and is pure Rust. I am also optimistic that our transpilation technique preserved many of the constant-time properties, so while it may not be the most performant implementation, it should at least be usable; but I would welcome the review and input of someone who knows much more about constant-time code to confirm my hunch. We’re able to use it as a drop-in replacement for ring, giving us TLS on Xous via rustls with a simple Cargo.toml patch in our workspace. We’ve also confirmed this works with the tungstenite websockets framework for Rust, paving the way towards implementing higher-level secure messaging protocols.

This leads to the obvious question of "What now?" — we’ve got this fork of ring, will we maintain it? Will we try to get things upstreamed? I think the idea is to maintain a fork for now, and to drop it once something better comes along. At the very least, this particular fork will be deprecated once ring reaches full 0.17.0 and rustls is updated to use this new version of ring. So for now, this is a best-effort port for the time being that is good enough to get us moving again on application development. If you think this fork can also help your project get un-stuck, you may be able to get ring-xous to work with your OS/arch with some minor tweaks of the cfg directives sprinkled throughout; feel free to submit a PR if you’d like to share your tweaks with others!