We’re pleased to announce our first turnkey “app” for Precursor: the “Vault” Authentication App. The Vault app can manage U2F/FIDO2, TOTP, and conventional passwords, all from a single UX, and in a plausibly deniable manner.

When the Vault app is launched, you can plug your Precursor into a host PC, and use it as a U2F or FIDO2 authentication token. Unlike a typical security key, you can see a description of what you’re authenticating: 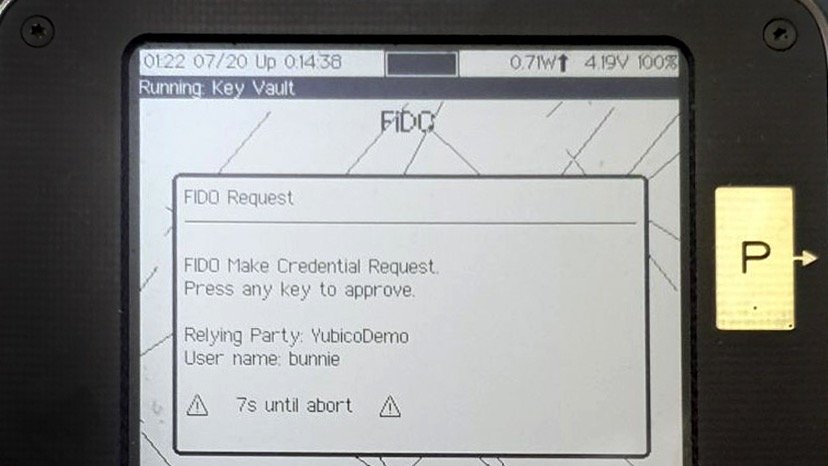 You can also see the list of U2F credentials that are stored inside your device: 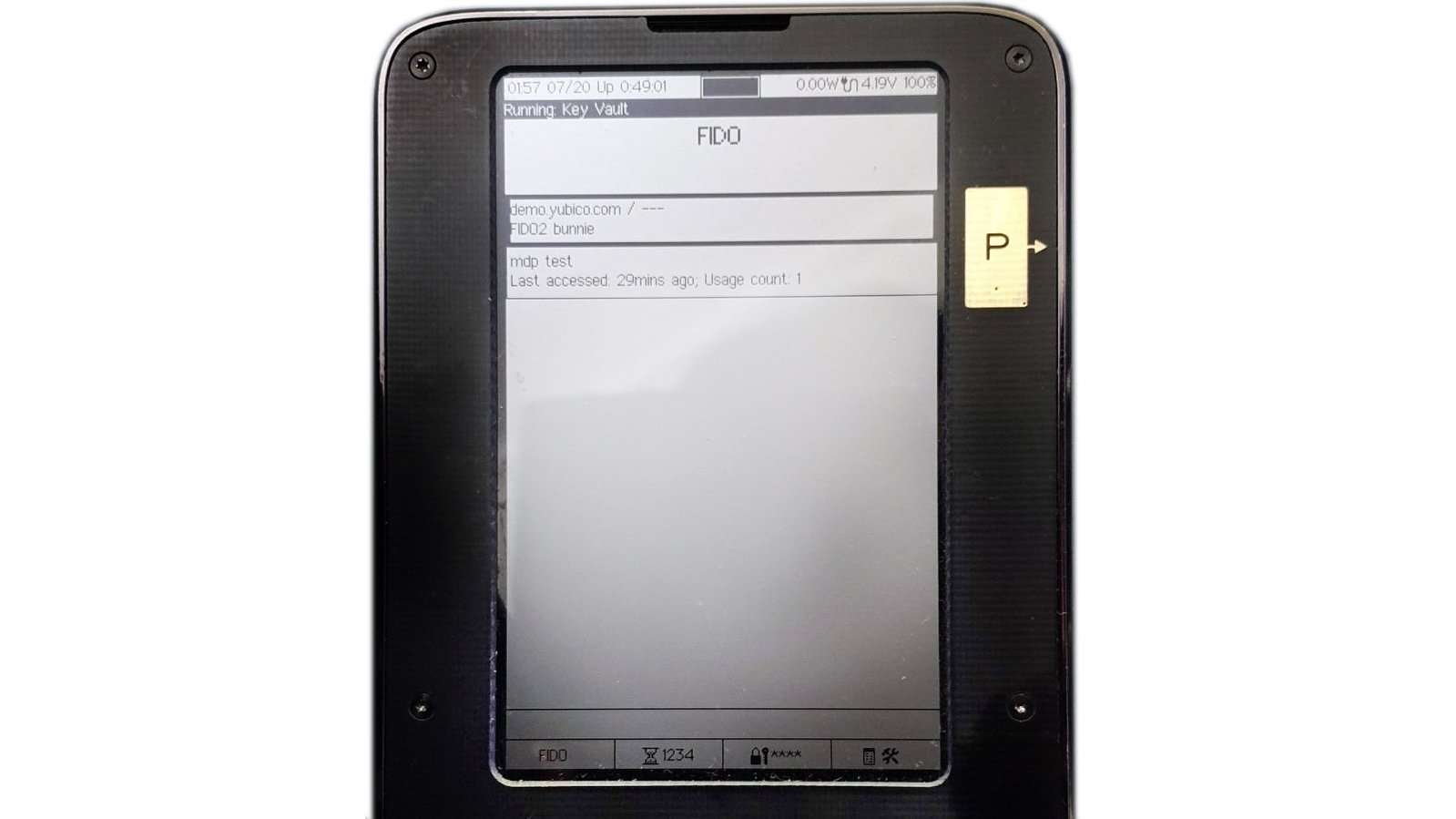 You can use the F1-F3 hot keys below the screen to switch between Vault modes. F2 brings you to the TOTP mode: 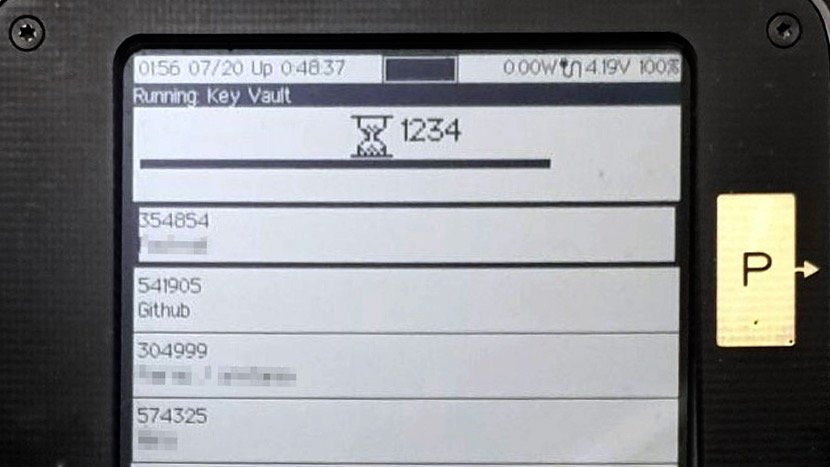 And F3 brings you to the classic password manager: 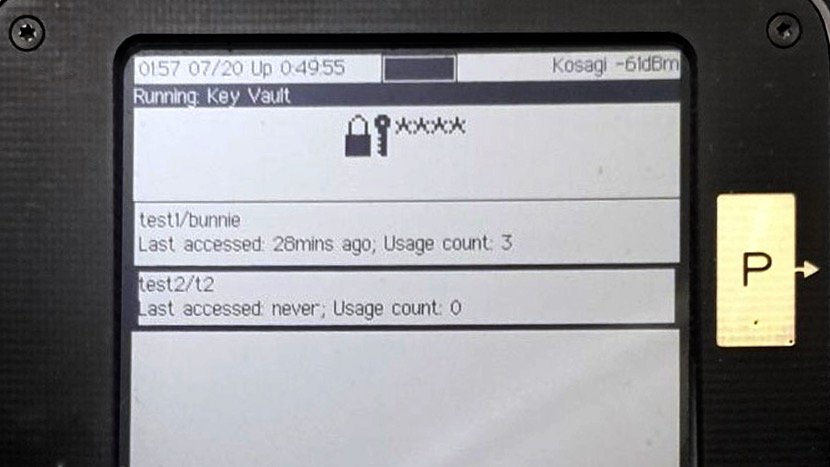 In each of these modes, you can select and edit the credentials on the device, like so: 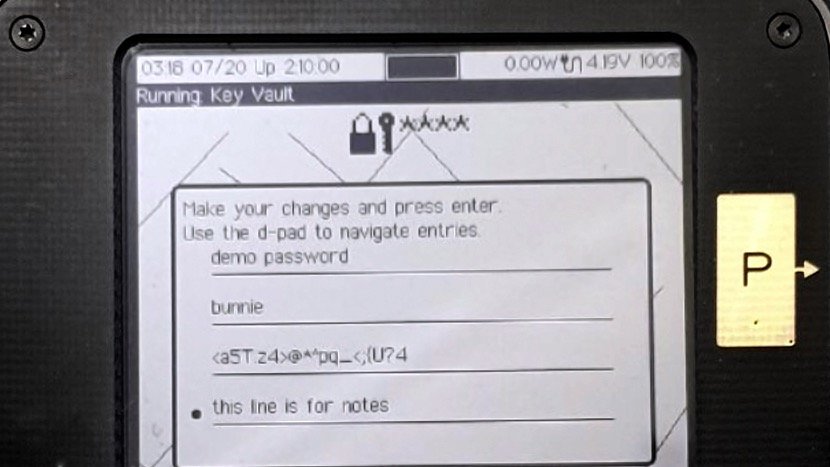 Here, you can see how each password record has a descriptive name (“demo password”), the username (“bunnie”), the password itself, and a note field where I can keep track of any special characteristics for the password (“this line is for notes”).

The password manager can also help you create a strong password with the help of Precursor’s built-in TRNG. It has basic configuration options for things like the length of the password, and if the password should include symbols, numbers, and/or upper case characters. 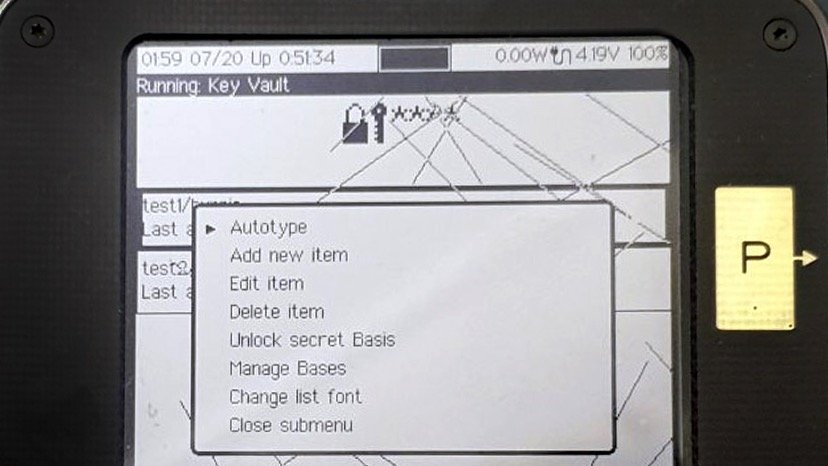 The Vault also features “Autotype”: if your device is connected to your host via USB, it will appear as a keyboard when the Vault app is active. Precursor can then send virtual key-strokes to automatically fill in a password or OTP with the push of a button. This way, you never actually have to see or type any passwords yourself; so long as you have your Precursor plugged into the host machine, your passwords are just a couple button presses away.

You can also see from this menu that “secret bases” (bases being the plural of basis) are explicitly supported by the Vault app, thanks to the Plausibly Deniable DataBase (PDDB) built into Xous. The structure of the PDDB is a subject for a whole other post, but in a nutshell secret bases are database overlays that can hide credentials in a plausibly deniable fashion. By keeping sensitive credentials in a secret basis, you can safely share only the credentials that are currently visible with friends, colleagues, or even law enforcement. The locked credentials are untraceable: even if a full forensic dump is made of the device’s contents without your permission, it is hard to prove the existence or non-existence of secrets beyond the ones you have chosen to reveal to the party in possession of your device. To this end, the "Unlock secret Basis" menu item is always present, even if there are no secret bases on the device.

Of course, a cautious user would hesitate to put all their passwords into a single device without backups. For those users: Good news! In this release, we also have a solution for backups. There is now a new main menu item titled “Prepare for Backup…” which extracts your root keys, encrypts them, and stages them with the PDDB for readout by a host via USB. You can read about how to do backups and restores at our wiki.

The backup key is the 256-bit AES key encrypts your FPGA, and transitively your root key store. When you perform a backup, the backup key is displayed on your screen as a BIP-39 wordlist: 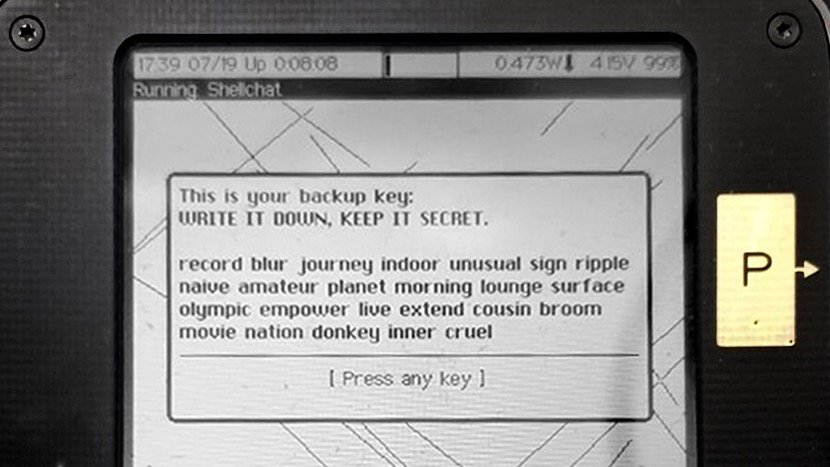 We also have created a BIP-39 wordlist input helper, so you don’t actually have to type every word in full – the helper will offer autocomplete suggestions.

As most developers have not set their backup key, the key by default would show as “abandon abandon abandon … art” (That is, 256 zeroes in BIP-39 format), but users who wish to set a strong backup key can currently follow this guide to “burn” their BBRAM FPGA key with the help of a Raspberry Pi. We plan to unlock fully self-contained burning of the eFuse key in the next release or two. However, we’d like to put this flow through more testing first, because once the eFuse key is burned, you can’t undo it, and the device is permanently bricked if something goes wrong!

Other Updates and Changes

You’ll also note a change in some terminology:

The updated terminology is not as pedantic as the originals, but hopefully much easier for new users to adopt.

Finally, there are dozens of contributions and bug fixes in this release. They are listed in full in our release notes, but here are some shout-outs and highlights:

I’m super excited about this release because I am now using a Precursor device as my very own password manager. I finally have a place to put sensitive passwords that I can 100% trust: I’ve verified it from the logic gates up; there’s no hand-waving around clouds and closed-source security enclaves; and it has encrypted backups, so I have a way to bootstrap myself in case the device is lost, stolen, damaged or – urp – bricked by my own bugs!

While secure messaging and cryptowallets are still on the roadmap, there’s still the significant hurdle of getting a functional TLS layer on the device that is blocking progress (it turn out that rustls relies on ring which is actually a wrapper around a bunch of C++ and assembly routines with no RISCV support). Also, thanks to nworbnhoj’s efforts sniffing out image handling, we also know that we have a bit of a hill to climb around handling rich media types without blowing up the heap.

I’ll return to poking at these difficult questions later this year, but for the next release I’m going to take a breather and focus on “gloss”: no new major features per se, but things that improve the user experience or clean up technical debt in the code base. Stuff like clearer documentation, PDDB performance improvements, working with community developers to pull in staged features such as improved TOTP entry & wifi setup UX (thanks gsora!), and better CI coverage are on the docket for the next couple of months.

Finally, the supply chain crisis hasn’t played out yet – our shipment of FPGAs for a re-stocking build this fall is still showing a delay until next year; but, on the other hand, rising inflation, recession fears and the crypto crash have slowed down sales. Somehow, in a round-about way, everything still works out. Our “slow code” philosophy means we’re set up to be in it for the long haul; so, a looming recession is just a bump in the road that gives us an opportunity to make Precursor and Xous even more useful. We’ll be ready as ever when the economy picks up again!