Thank you for signing up and backing this project!

We will delve into the hardware components of the Vision FPGA SoM in this update.

The SoM is designed around the Lattice iCE40UP5K low power FPGA. This FPGA was chosen for the following reasons:

The SoM is designed to support 3 different image sensors:

Of the three, the Himax was chosen based on user feedback from a survey. The Pixart sensor is not installed and will be made available as an option at some point in the future depending on user requirements.

An Knowles I2S microphone SPH0645 was chosen as the microphone as the I2S protocol is very easy to de-serialize in the FPGA with minimal logic as compared to using PDM where a larger number of microphones are available. Motion sensing is supported by an Invensense ICM20689, a high quality 6DoF IMU meant for Drones, IoT and VR applications.

qSPI was chosen as it offers ~4x the bandwidth of SPI. The 4Mb flash can store multiple FPGA images as well as code for a RISCV processor or AI models. The generous 64Mb qSPI SRAM SRAM can store temporary data such as images from the camera that may not fit into the FPGA which has a limit of 1Mb.

Whats a board without some blinking LED’s? A 3 color LED can be used as for a user interface. A high power IR LED on the SoM can be used to illuminate nearby objects for the camera and also as a presence detector by measuring the image sensor average output with the LED on vs. off. The LED operation is synchronized to the image sensor exposure to minimize power dissipation.

Only a single 3.3 V supply is required to run the module. All required voltages are generated on-board using LDO’s. The 1.8V and 1.2V voltages are brought out to pins for use by the rest of the design (<100mA).

The glue logic enables programming the FPGA and on-board Flash. 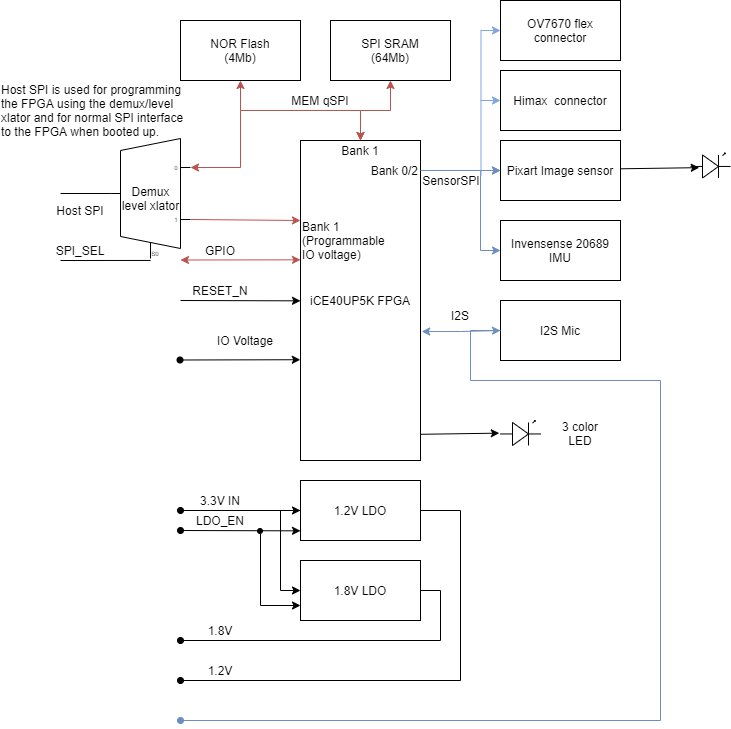 The drawing above shows how the various HW components are hooked up in the SoM. All devices on the SoM operate at 1.8V and occupy two of the 3 banks of the FPGA (Bank 0, 2). The image sensor communicates with the FPGA using I2C (Himax, OV) or SPI (Pixart) and an 8 bit parallel data bus. The sensor I2C bus is shared with the IMU and is also brought out to pins in case the user would like to access these device or for expansion to other sensors.

The memory is on its own dedicated 1.8V qSPI bus with independent chip selects to select the Flash and SRAM.

The glue logic is a bit more interesting: The SoM was designed to look like a SPI slave peripheral to a host processor while allow for flexible voltage levels (using Bank 1 of the FPGA).

The PWB is a 6 layer board that was designed using Altium. The initial designs were using 4 layers but when the various sensors options were added, this resulted in requiring 2 more layers to successfully route the board. Castellations were added to make the board easy to solder into a system board. However, this required that all parts be placed on the top side. With the exception of the microphone (bottom ported) and the connector, this was possible. Solid decoupling has been provided along wiht a solid ground plane and dedicated power planes for the best possible power distribution to the various devices.