TL;DR: We’ve passed both FCC and CE! We’re assembling the PCBs of the pilot run next week and shiping the first pilot run of 50 UHKs around the end of November. We’ll do our best to start to delivering the rest of the UHKs in December, but we may slip to January due to the holidays.

We assumed that CE is a piece of cake after we passed FCC so easily, but as it turned out, it wasn’t a walk in the park at all. First, I got a message from TÜV Netherlands saying that we failed CE. They shot one of the UHK prototypes with an ESD gun at the bronze inserts in the back. A discharge of -6 kV made the prototype permanently dysfunctional.

Given that FCC was already done by TÜV Netherlands and TÜV Hungary is entitled to certify CE, I called back both prototypes to Hungary. Upon arrival, I investigated the failed one, and saw that the microcontrollers in each half and the FB7 ferrite bead of the right half were fried. After replacing these parts, the prototype was perfectly functional again.

In order to prepare for the next CE test, András fabricated a couple of rubber caps which I glued to the bronze inserts inside of the plastic case to isolate them from the PCB. 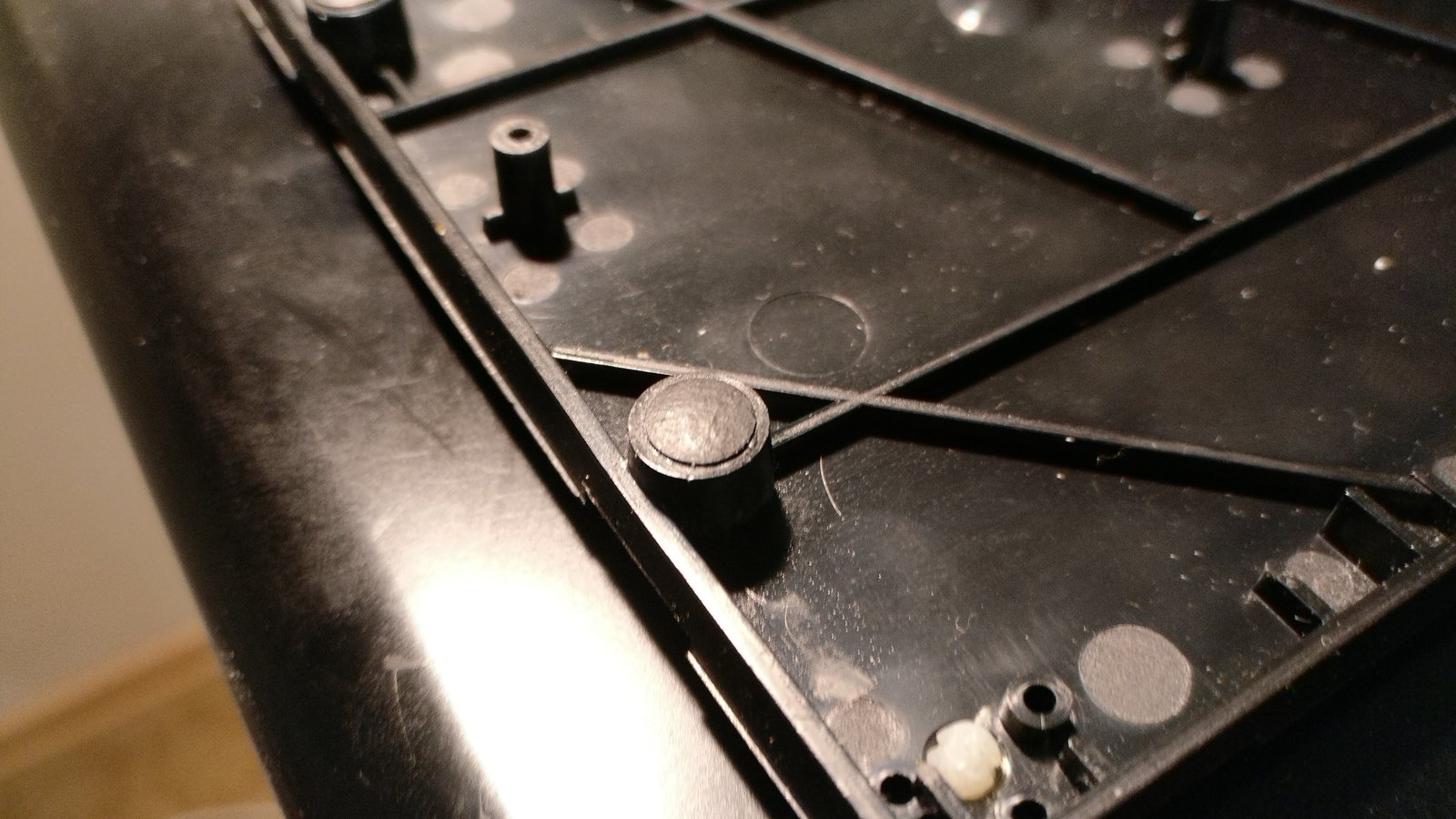 Armed with this fix, we went to TÜV to conduct the next test. 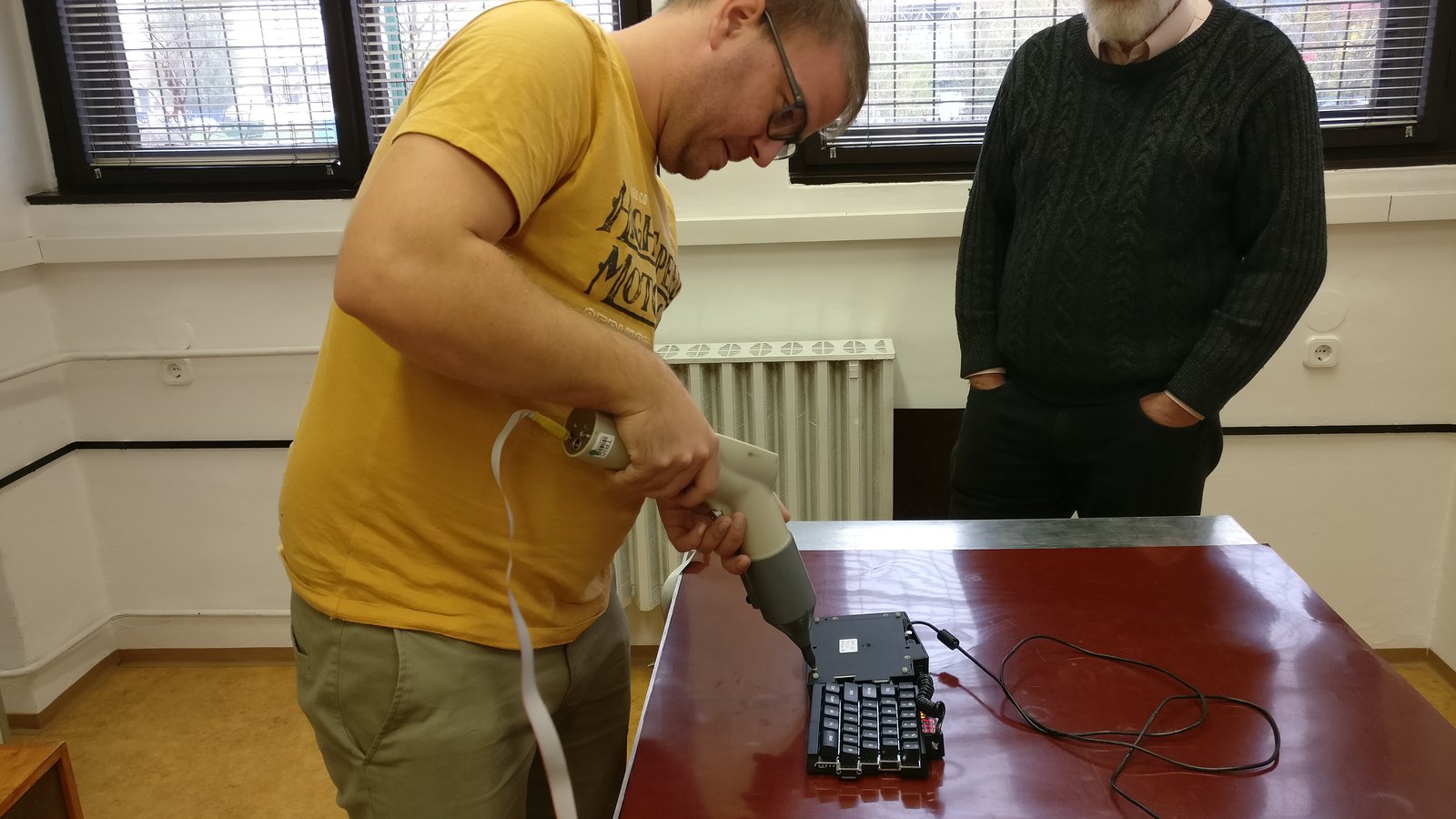 Oddly, not only the sealed inserts passed the test, but the non-sealed inserts, too. We couldn’t reproduce the issue that TÜV Netherlands hit, but we found another one.

When Balázs shot the magnet of the right half with the ESD gun, the prototype failed. The lights went out, and operation could only be restored by power cycling the prototype. Even though it’s not a terminal failure, according to the standard, this is a fail.

We came up with an idea on the spot: insulating tape. We stuck some tape to the ends of the right magnet inside of the case which made the prototype hardly ever fail. This wasn’t a sufficient solution because the magnet had to be better sealed. We figured that epoxy should work really well because it withstands 11 kV/mm, and just as assumed, it did solve the issue indeed. 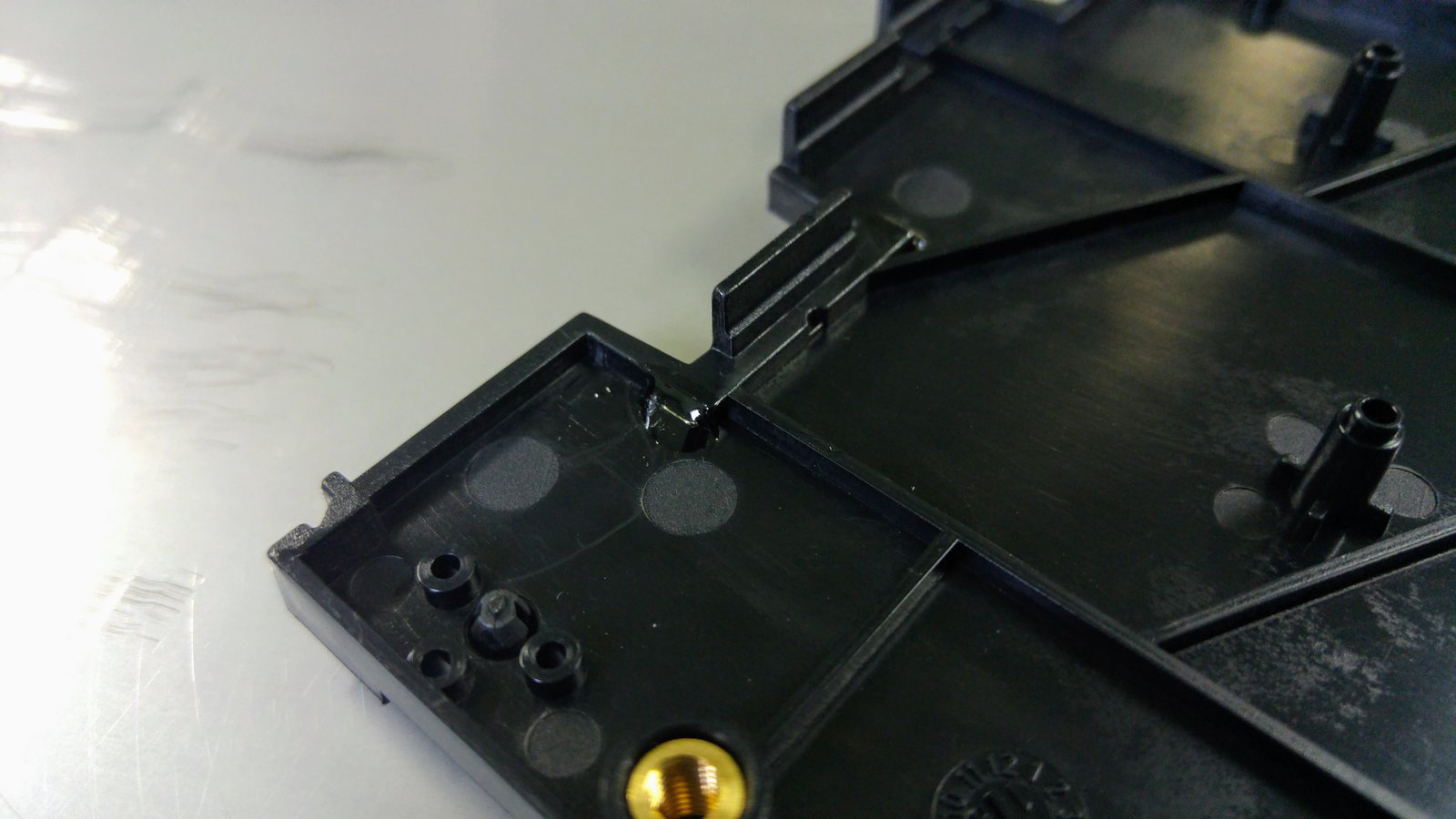 This is the preliminary CE pass for your viewing pleasure: 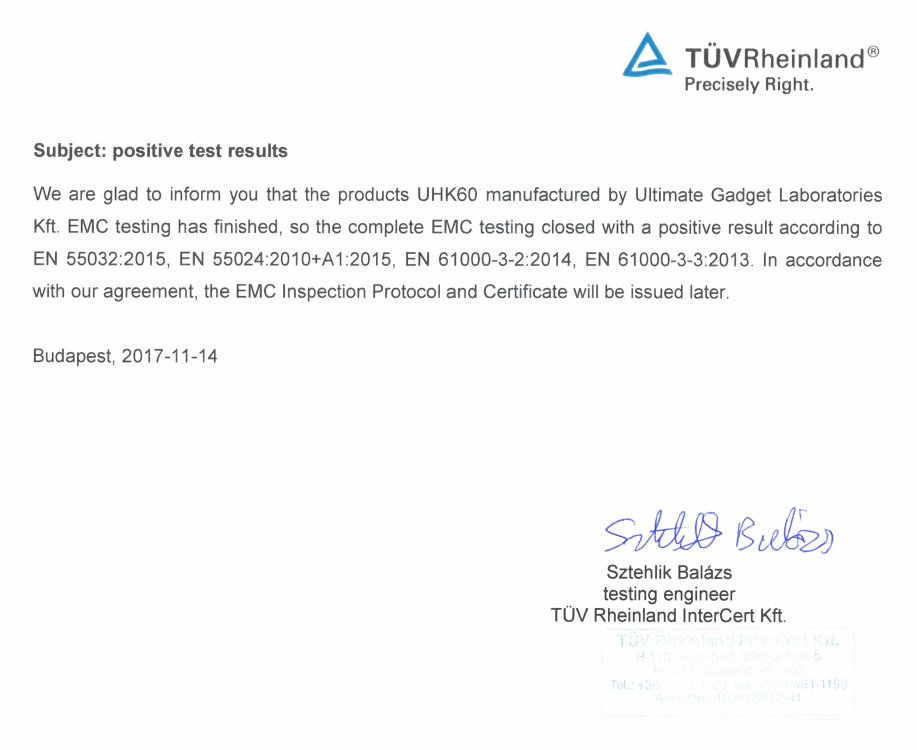 And this is the pass section of the official FCC certification: 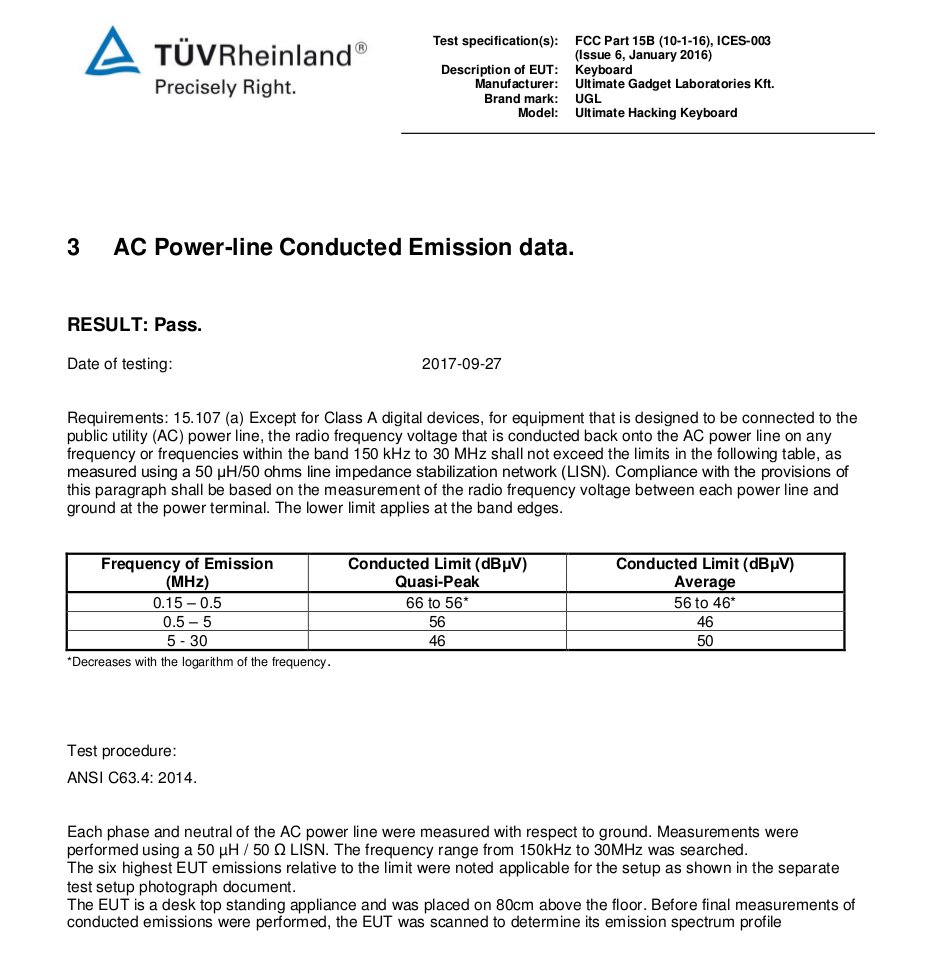 Ultimately, we’ll modify the molds to seal the magnets with plastic. ABS withstands 20 kV/mm, so it’s an even better insulator than epoxy, and we won’t have to apply drops of epoxy during the assembly process. Until the molds get modified, we’ll apply epoxy to the current cases that we ship to the EU (CE being EU-specific).

We recently visited a company to choose the colors of the non-black cases. Instead of using their stock colors, we ended up asking for custom colors according to the rendered images that you can see on the order page. 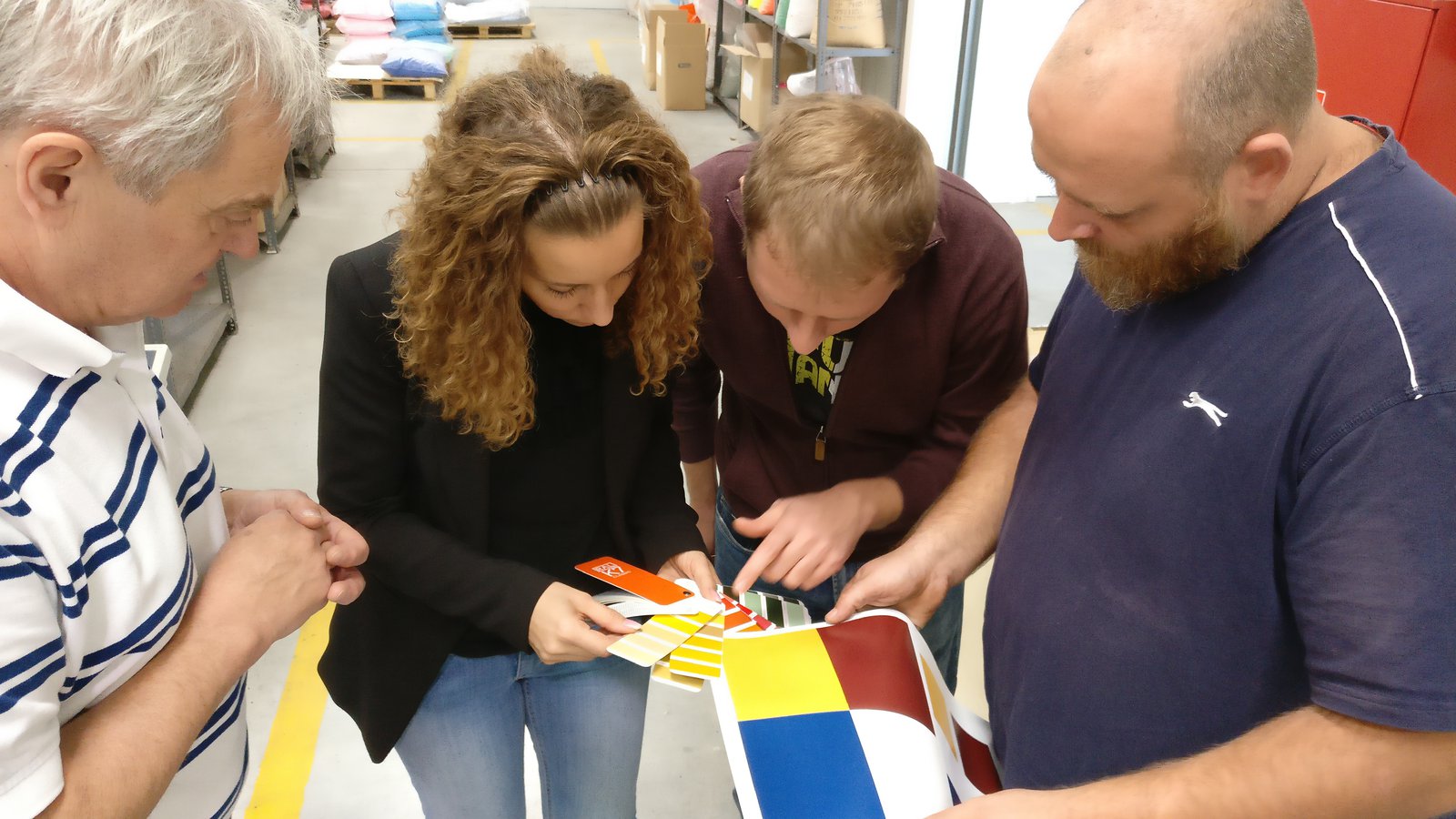 I’m happy to report that the first colored UHK cases just rolled off the assembly line. 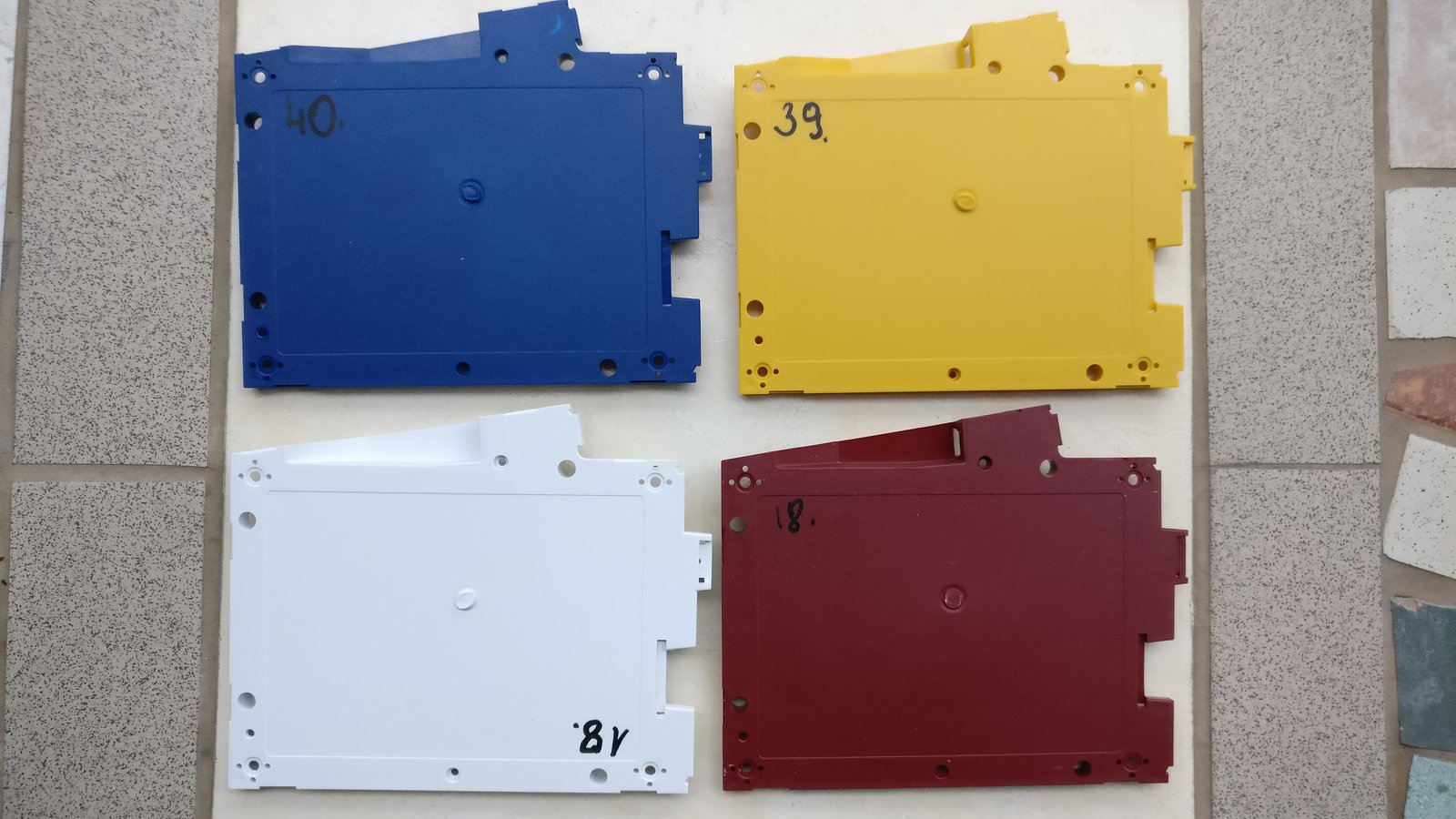 We can’t wait to see the colored UHKs fully assembled!

The correct back stickers have finally arrived, and we applied them to the back of the cases. Next, the top and bottom cases are (separately) assembled featuring all the bells and whistles. 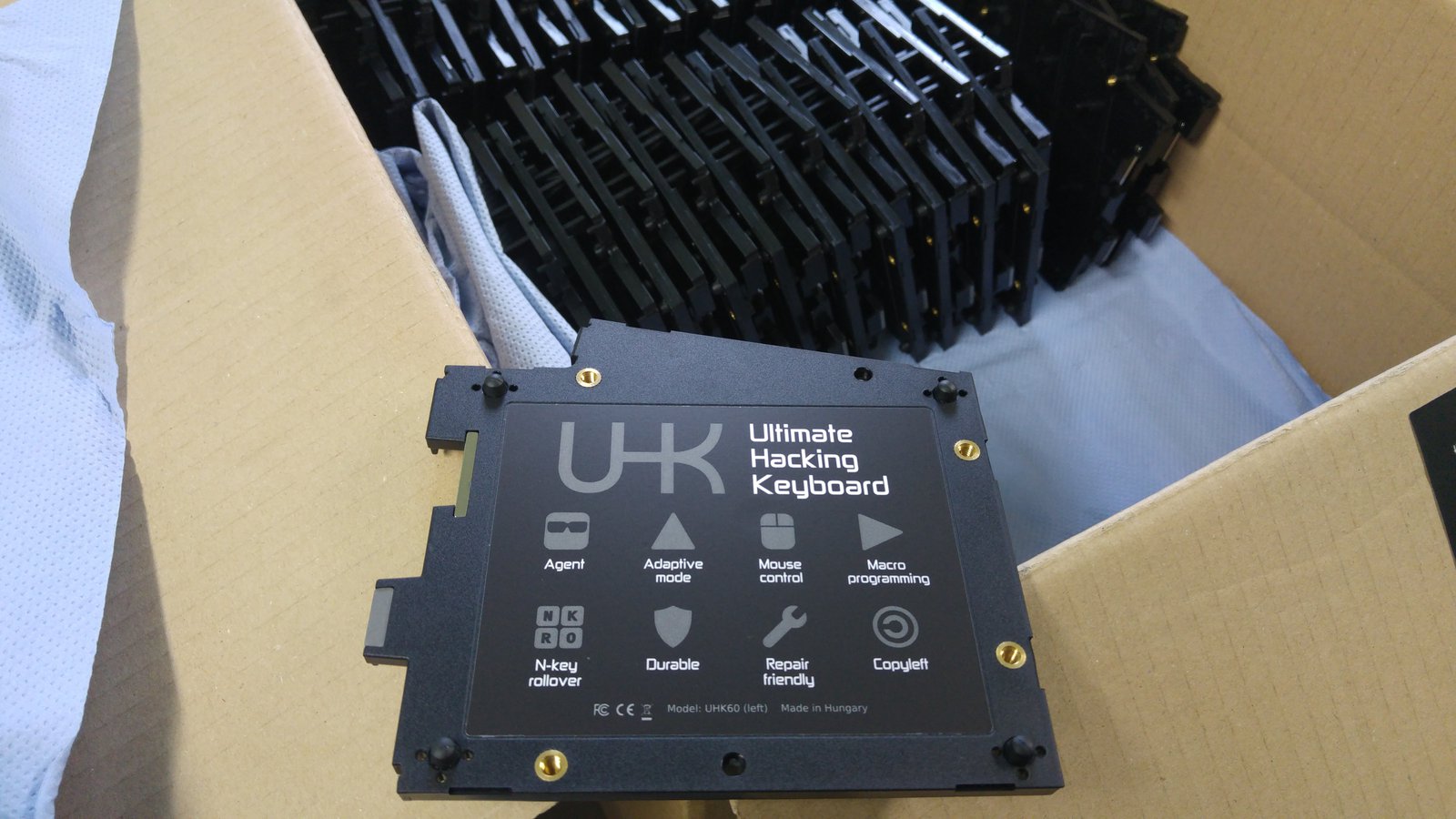 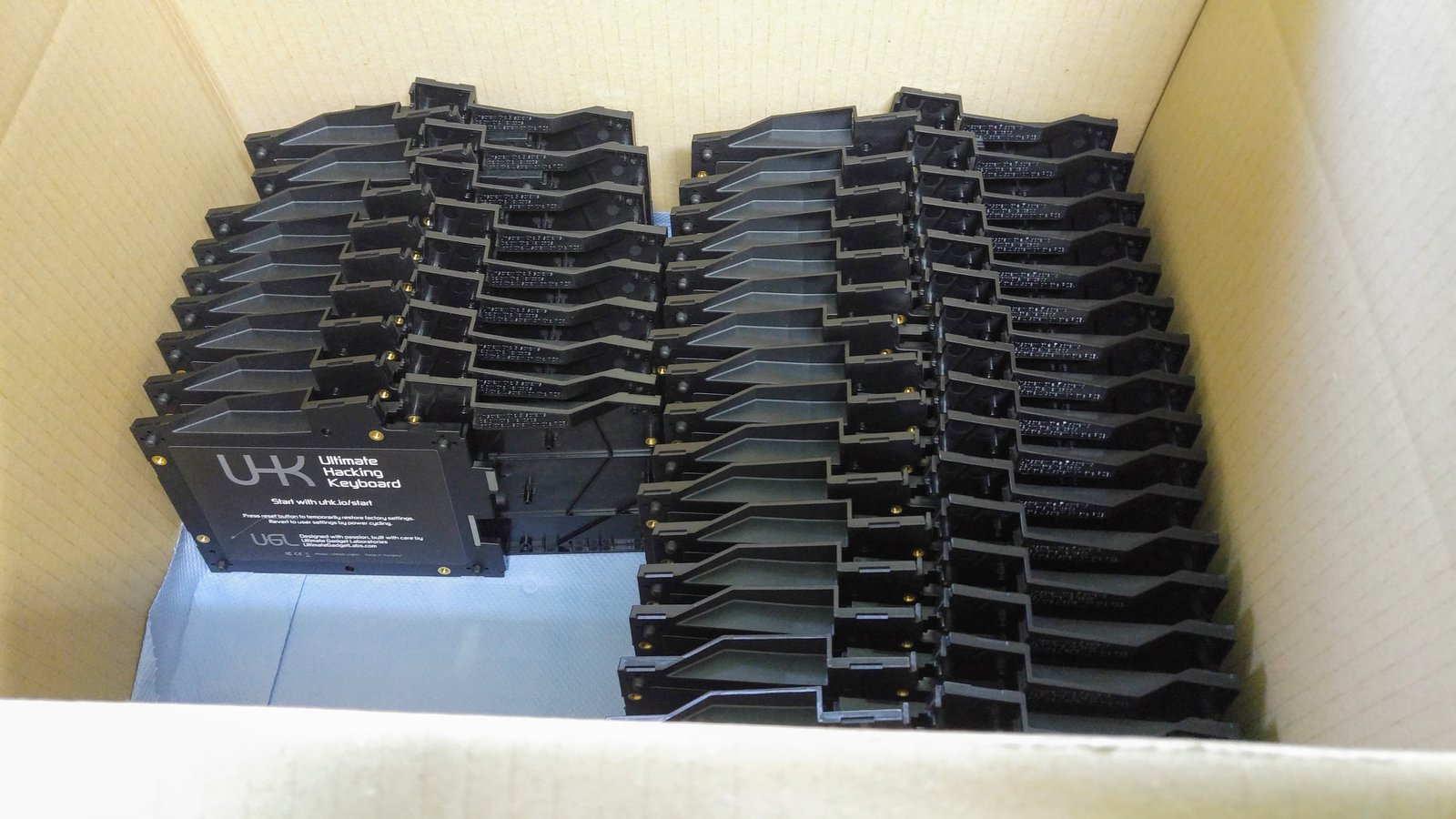 We recently noticed that the pad printing of the right case buttons is off. The position of the print has been misaligned by 2 mm. New case buttons will be printed this week.

We also noticed that the LED display was hard to see in bright light, so we asked our supplier for some new samples, and they were able to improve upon the design. Now the manufacturing of 3,000 new LED display films is in progress. They’ll likely arrive next week, at which point, we’ll remove the old films from the displays and apply the new ones.

The outer boxes into which the smaller product boxes will be packed for shipping are being manufactured and are scheduled to be ready next week.

I’ve been super busy with the firmware, landing about 150 commits in the firmware repo since our last update, and released a new version. You’re welcome to read the changelog.

Robi has finished the cross-platform build system of Agent and released versions for Linux, Mac, and Windows. The next step will be the the auto update feature, and integrating the firmware upgrade scripts to Agent, so Agent will be able to update the firmwares of the keyboard halves and add-ons.

As for the estimated delivery schedule, we plan to send out the 50 pilot run UHKs by the end of November. Then we’ll wait about a week or two for the feedback of the pilot run recipients to make sure that everything is up to snuff. Afterwards, we’ll try our best to launch the delivery of the remaining 1950 UHK of batch 1 in December, but due to holiday season we may have to postpone the shipments to January. We’re trying hard to deliver as soon as possible, but we won’t rush things at the expense of quality.