TL;DR: Please update to the latest UHK firmware for macro support, and to help us fix the freeze bug that plagues recent firmware versions. Agent now visualizes secondary roles. We’ve churned out six mini batches since our last update. The development of the add-ons is going slowly while delivering the pre-orders, but we’ll switch to high-gear afterwards.

Update to the latest firmware!

If you’re reading this and already have your UHK, please upgrade to the latest 8.4.5 firmware in Agent! This will result in many goodies over the factory-flashed 8.2.5 firmware, including macro support and numerous bug fixes.

The only gotcha is the freeze bug. Recent firmware versions cause occasional freezes on some UHKs. This is a longstanding bug, and the only reason we haven’t yet fixed it is because we can’t reproduce it. That’s why we need your help! The more people who use the most recent firmware, the easier we can fix the freeze bug based on your feedback.

If your UHK freezes, please be sure to report it according to the freeze bug issue. No worries, you can always downgrade to 8.2.5 to regain stability.

If you’re a regular reader of our monthly updates then Max is no stranger to you, as he’s on a never ending quest to pimp his UHK. This time, he used the Godspeed Cockpit keycap set to customize his UHK and in his true style, he shared the gory details on Reddit. 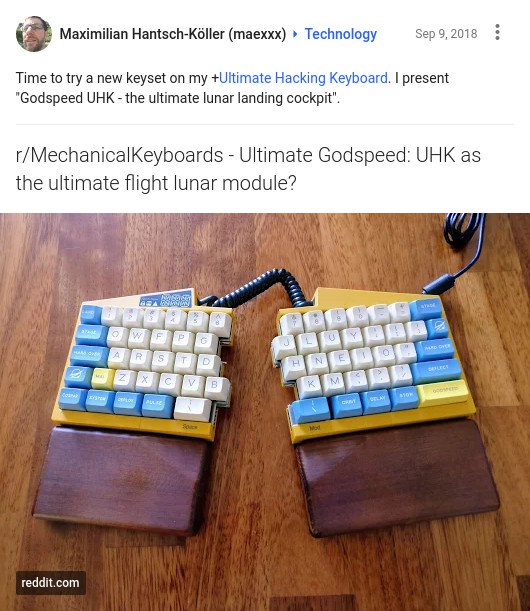 In the same spirit, Richard was also busy, and ended up creating the most unicornish UHK with extra rainbow flavour! 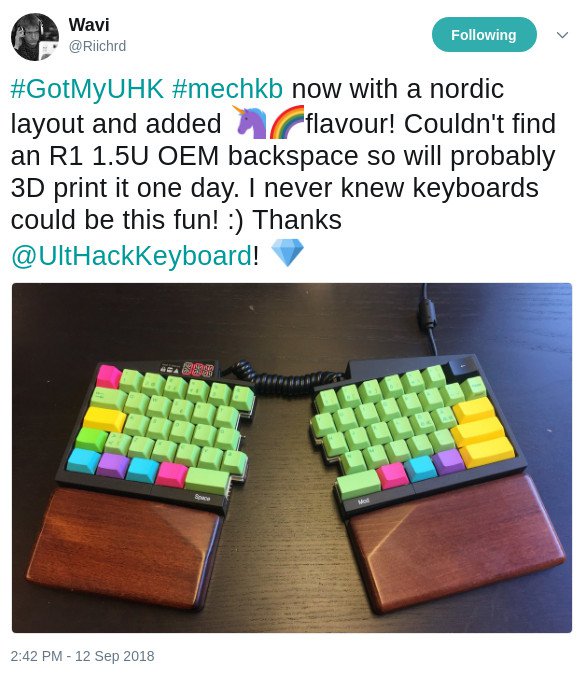 Dual-role keys are powerful. When tapping them they trigger their primary role. While holding them and pressing other keys, the secondary role kicks in. The UHK has always supported dual-role keys, but Agent hadn’t visualized them. Thankfully, this has just changed with Agent version 1.2.9.

Now Agent can render quite complex scenarios, such as a scancode featuring modifiers and a secondary role. This makes the rendering engine of Agent complete, so you can take a look at any layer and know exactly what each key does based on its visual representation.

As an added bonus, we’ve made modifiers show up according to your OS, so for example, Super is Command on OSX and it’s the Windows key on Windows.

The six mini batches we have produced over the last month have not constituted our fastest pace, but they’re in line with our recent progress. Manufacturing progress occasionally suffers a bit due to a number of factors. For example, our palm rest supplier was on vacation recently, and had to catch up with production. Such cases only cause temporary hiccups, and they can occasionally affect the sizes of mini batches positively or negatively, but we always manage them quite well.

As you can see, we keep pushing Agent and the firmware, but it’s quite a challenge to do heavy R&D these days because production and related tasks are so demanding.

Customer support is time consuming, as well as developing and fine-tuning backend systems. These tasks are not visible from the outside, but they’re absolutely necessary to keep things going.

Transitioning to our own webshop did end up heavily affecting our backend systems, including the integration and implementation of the webshop, factory automation, order fulfillment, and invoicing systems. Pre-ordering the parts of the second large batch also called for a procurement system which is up and running, but it has taken quite some time to set up.

Due to the above, we could only make a little progress with the add-ons. András has further refined their mechanical design, and will hand them off to a mold designer to finalize their mechanical features. I figured out how to optimally panelize their PCBs and factory-flash their firmware the most efficient way. We’re mindful about the add-ons, and will switch to high-gear once the delivery of the pre-orders is over.

Thank you for reading this update! We’ll be keeping you updated on all things UHK, and we’re looking forward to talking with you on 2018-10-12.