We’ll be at Mechanicon, Frankfurt on November 3.

Feel free to check out our delivery status page for the estimated delivery date of your order.

Hi there, and welcome to our monthly status update! Let’s get right to it!

We got a nice invitation from Christian Bäuerlein, organizer of Mechanicon, the largest German meetup for mechanical keyboard enthusiasts. Based on the video and photos of Mechanicon 2017, it’s quite an event, so we’ll be there!

By “we”, I really mean myself. I’ll make sure to bring a couple of UHKs, so that you’ll be able to give them a try. I’ve never been to Frankfurt, so I’m excited to be there, and meet with fellow keyboard enthusiasts.

I hope we can stretch the fun times, and nerd out even after Mechanicon ends at 20:00. Speaking of afterwards, if any of you could offer a couchsurfing opportunity in Frankfurt, I’d be more than happy to take it. I’d only stay for a night after the event.

Progress on the freeze bug

Miraculously, I was able to reproduce the freeze bug since our last monthly update, I believe I made a lot of progress after that, and committed a fix. Unfortunately, I don’t have a sufficiently large amount of feedback to confidently say so.

Given the unusually rare occurrence of the bug, there’s only one way to figure out whether the firmware is sufficiently stable: to flash it to production UHKs in the factory, which is exactly what we’ll do soon. Worst case scenario: some of you will have to downgrade to firmware 8.2.5. In my mind, this is way better than having to stick to an old firmware version till the end of times.

An awesome UHK backer, Brett Terpstra wrote a very nice and aptly named article “I wrote a review of the Ultimate Hacking Keyboard for you nerds” on his blog which you’re welcome to read.

To my surprise, Brett also talked about his UHK on his podcast called Overtired. Listen to episode 77, and jump to ~30:40 for the UHK part.

Max’s never-ending journey of pimping his UHK continues. His current creation is a black and white UHK. 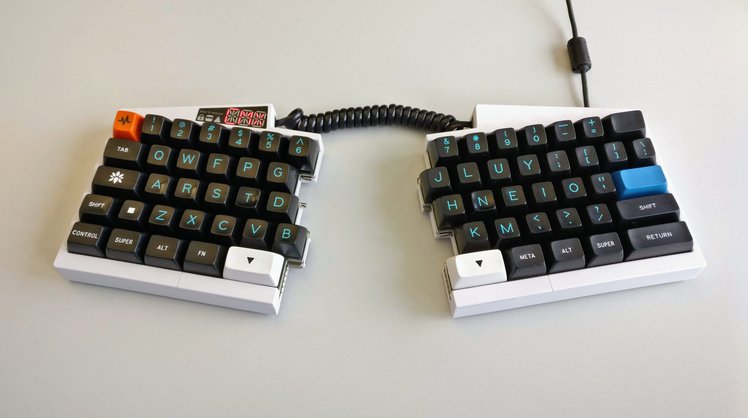 In his true style, Max shared the keycap sets he used on Reddit, and posted a fair number of nice photos on Imgur.

In an interesting turn of events, Max and I have actually met in person since our last monthly update. It just so happened that he was crossing through Hungary, which served as the perfect excuse for the two of us to meet. We ended up talking for hours, mostly about keyboards as you can imagine. He’s a great guy, I enjoyed his company very much, and I’m looking forward to seeing him again.

The standing ETA of the modules is December, but it’s blindingly obvious that we won’t make it in time.

This year has been unusually eventful. We had to scale up production which called for a manufacturing execution and fulfillment system that I developed from the ground up. Then we set up and fine-tuned our webshop. Soon, we’ll have to transition to on-demand manufacturing which will call for quite a few backend system changes. And amidst all these happenings, we’ve been pushing the firmware and Agent further, and answering an increasing rate of customer inquiries.

We keep churning out the mini batches at a steady rate, and things are expected to settle down by the end of the year. Only from that point on we will be able to truly focus on the modules.

In the past, we have always laid out an ETA, often missed it, then updated the ETA. It’s alluring to lay out estimates because it temporarily calms people down, and stops the seemingly endless flow of “When will my order arrive?” questions. But every time the ETA is not met, it erodes trust just a little bit more. We didn’t mean to lay out bullshit ETAs on purpose, it’s only so that hardware is incredibly hard to make, much more so than software, which is very hard by itself.

Given the above, I decided to not lay out an ETA for modules from this point on. I’m confident that we’ll make tremendous progress with them as soon as things settle down, and I welcome you to join to our journey of making the modules by following us via our blog or newsletter.

Thank you for reading this update! We’ll be keeping you updated on all things UHK, and we’re looking forward to talking to you on 2018-11-15.