Software update and a bit about 'Citizen Science'

Due to delays on my end with hardware shipments and other things, I’ve had a lot less updates to show during this campaign period than I would have liked. In light of that, I’d like to spend some time talking about a point of view that I came to value more over time and eventually found a passion in. When I hear the words “Citizen Science” I think of these dorky physics presentations we watched in Elementary School by our local Bill Nye types. I imagine bottle rockets and happy idiots creating explosions in their backyard since that’s what I thought was cool as a kid. However, my experience of the world has come to show me a much greater but similarly spirited effort happening as I tumble further into my particular niche of the moment, Biofeedback and Neurofeedback.

First, let’s get a quick update out of the way. The software is coming along great, while everything is still in pre-alpha or alpha. We have video, audio, and custom graphics-based feedback options. We’ve mimic’d the basic functions and you would find in just about all biofeedback software with some much-needed streamlining. I’m structuring the board-based web app to be something you’d plug and play. It’s enough to do the testing or exercises and have the interactions you want without any clutter - just the essentials. I’m hoping to burgeon this with an online database where people can collect and share their data or research notes, which is also in the works. We’re still hoping to show off the State Changer game integration before the end of the campaign but again, delays. 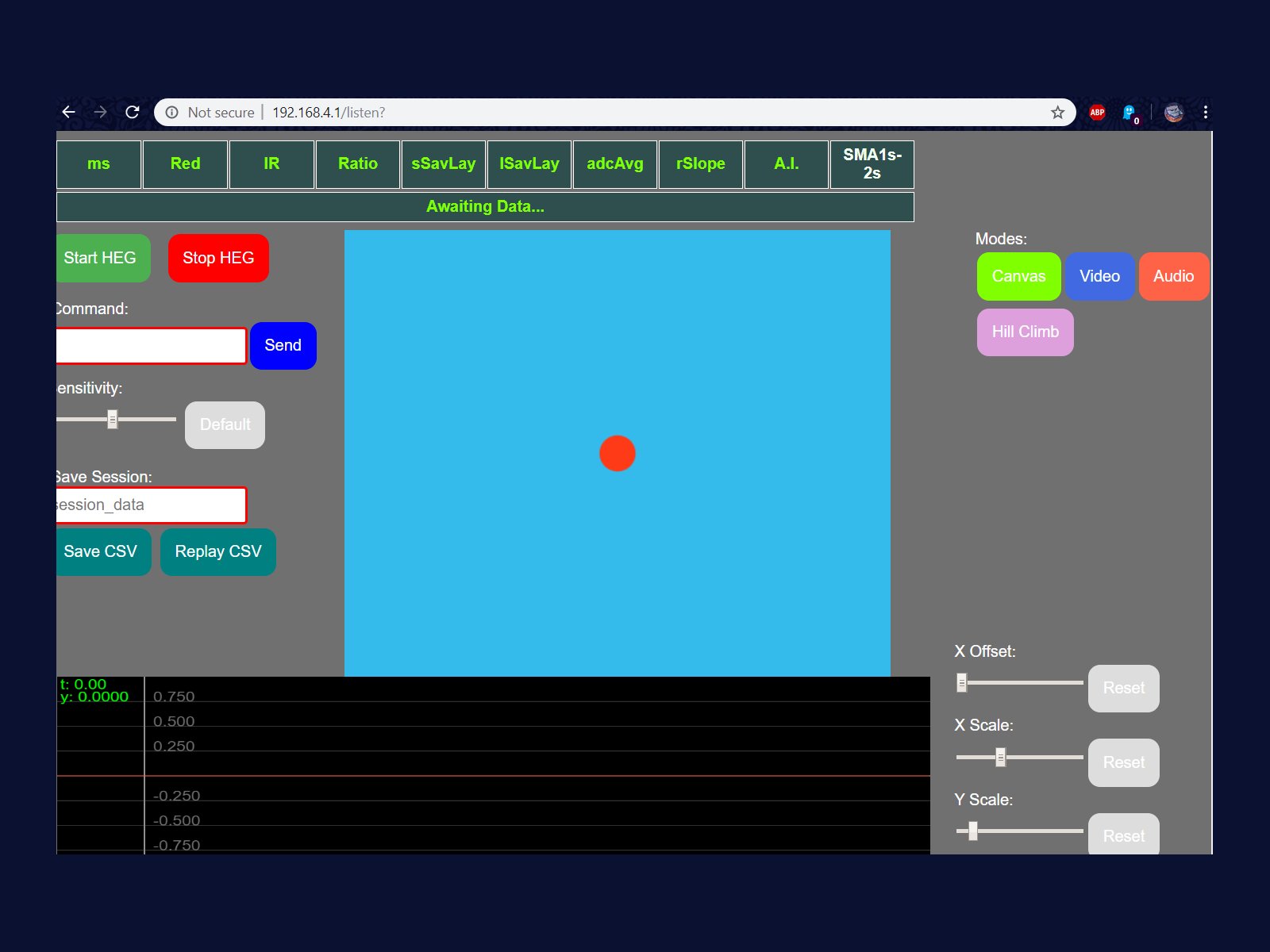 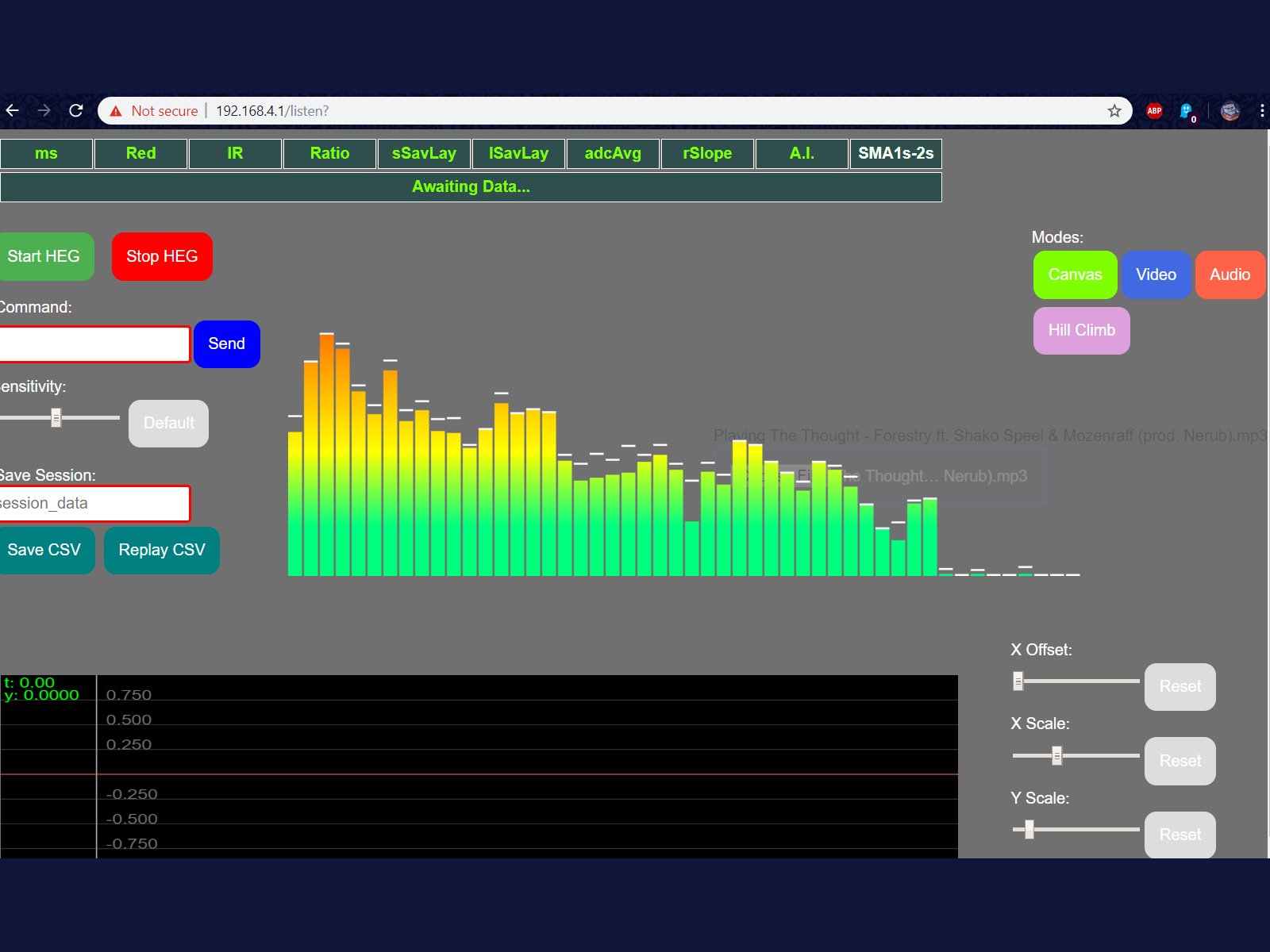 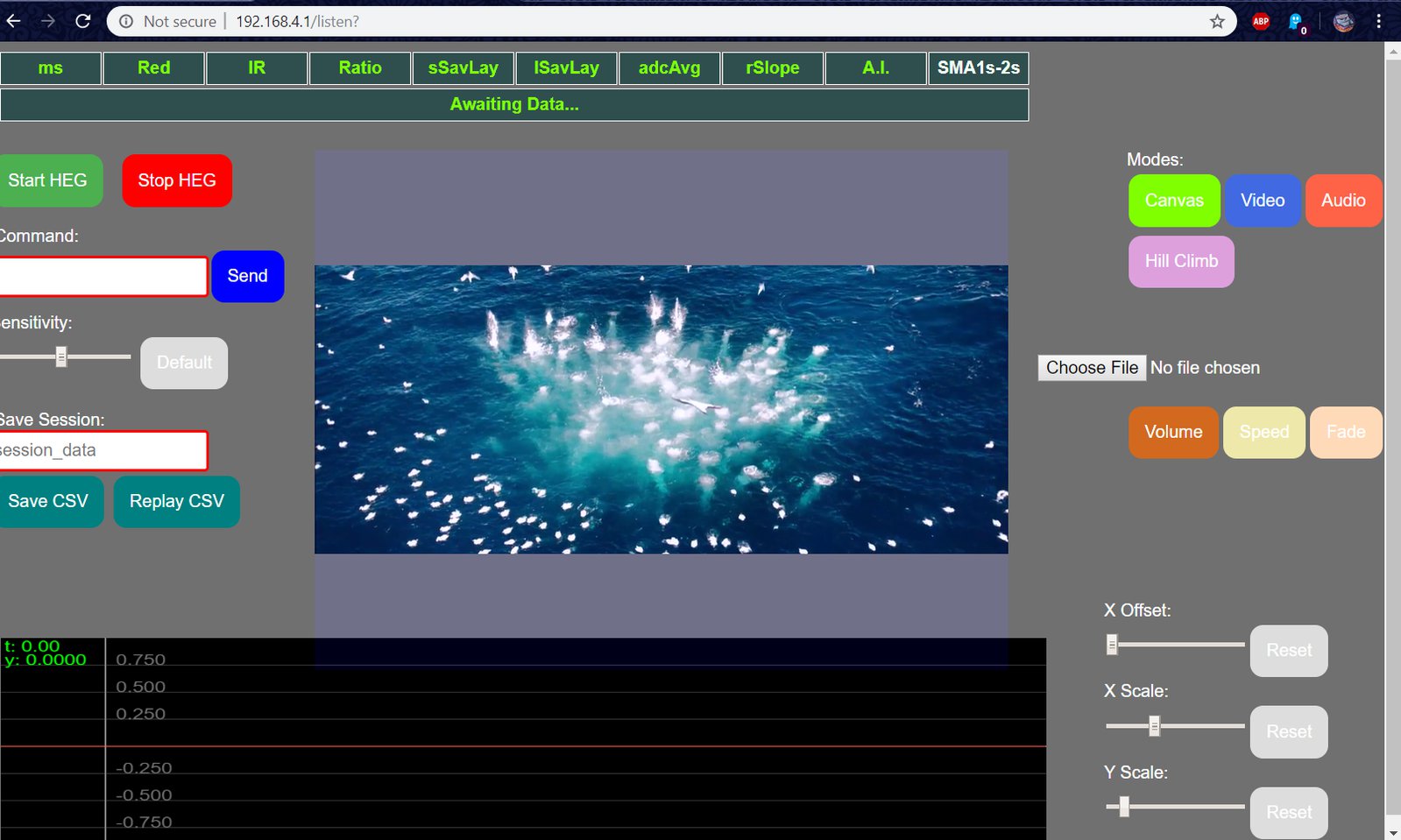 See above: Graphical, Video, and Auditory feedback with different features available at the click of a button.

Back to the story. Who am I? I’m a semi-formally trained weird dude who spent a lot of time in school trying different paths, got out with my associate’s after 6ish years split between engineering, computer science, and psychology, and decided I had enough. I live in a cabin in Alaska, I work on a phone connection or at a friend’s house and at libraries. I’ve been doing this project among others for year and a half, completely amateur save for the help of my partner Eric, and then earlier this year getting tied in with Pete van Deusen’s work on a new commercial HEG with a Brazilian dev team. Why? I am apparently the only one working on the HEG in any meaningful sense that they could find. It could just as easily have gone to someone with real expertise in hardware design but instead it landed on me. Now I’m working with BGA components and stuff so small you gotta squint at it, what do I think I’m doing? I don’t really know, yet here I am working on experimental medical tech almost by myself and learning the tricks of the trade.

Almost everybody who founded or maintains biofeedback technology and practices in the US are at or past retirement age. Most of the older people in any respective field are not really up to speed on modern technology, yet they have a lot of the foundational wisdom that helped build the world we live in today. I’m not talking textbook knowledge, but understanding how to create better networks or how to do amazing things with natural phenomenon like it’s child’s play.

The most important ideas don’t always make it ahead in time. One demonstration of this comes from my experience in aerospace engineering. I interned for NASA once upon a time out on Area 1 in Palmdale CA (then NASA Dryden FRC, now NASA Armstrong FRC). One of the directors had worked for 20 years on a research project where he pieced together the work of 4 separate physicists from during the founding of modern flight. He found that the 4 of these scientists independently provided the pieces of a “most optimal” model for airplane geometry to maximize energy efficiency and provided an equation that provides a sweet spot design for whatever kind of plane you’re trying to build. It was modeled partially on bird flight - after all a bird looks nothing like a 747 - and apparently explains how bumble bees can fly.

This NASA scientist projected modern passenger jets could get a 60% fuel efficiency boost if remodeled around these new ideas… that are 100 years old. These important aeronautical scientists all spoke different languages and it was war time, and so it was that a lot got lost in communication. Of course, just like the HEG, this is all still mostly experimental work at its current stage, in spite of a fairly long history. 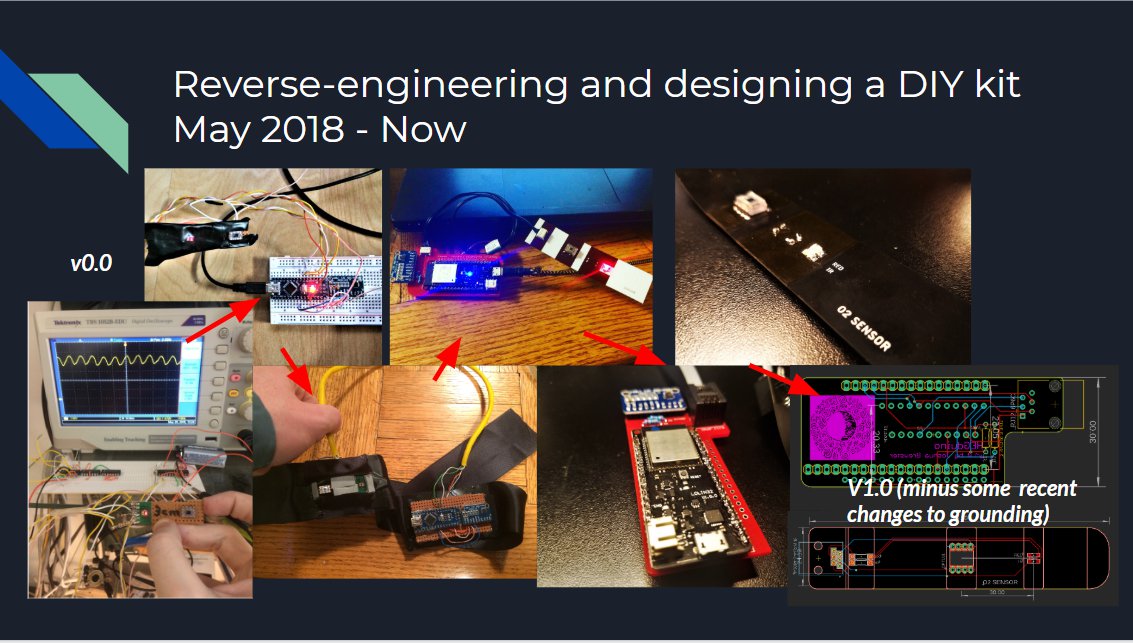 Going from handmade to computer designs with continuous iterations for quality without introducing cost.

Today, nobody can even seem to agree on the basics here in the US, and I found my academic experience often lacking in encouraging a certain level of engagement and networking, except maybe at a middle school I attended. Do you know what happens when enough people are raised apathetic or simply ignorant for enough time? That long, long, carefully constructed stream of wisdom that has gotten us from wheels to quantum systems or say, better medical practices, can just up and vanish - at least for certain areas of our human endeavors. The essence of all this is, where do we want to go together while we’re crammed in on this big living rock? What kind of world do we really want to end up with? I know I don’t like a lot of current global trends in health and ecology, and this is what I choose to do about it with my hodgepodge of abilities. There’s a lot to discover - and rediscover - and it falls on all of us to make sure that happens in a thoughtful way.

This brings me to my point about “Citizen Science.” It’s not just about a transfer of knowledge and an ability to make different “things,” but a certain level of enthusiasm for life and a willingness to pass that on to each other or incoming generations. We’re all in this together. Many of our best and most far-reaching human works have come from the ability to work with each other and build bridges across language and time. Today we are consistently incentivized to eek out every bit of monetary gain we can from every little thing we do. And sure, I gotta feed myself too, I’m going to do it with building affordable hardware for you all as that’s hard work, but with everything else I’m leaving the doors open in hopes it helps others in some of the ways I’ve been helped by my mentors. I believe it’s important to structure our work that way if we are fortunate enough to be in a creative capacity.

Incoming is an article by me with some interviews with the biofeedback people I’ve gotten to know while working on this project. Hoping to get it done before the end of the campaign, but it’s happening either way.