Last Week's AMA Behind the Scenes, Beta DiceKeys have shipped, and App Updates

Thanks to everyone who came to last week’s AMA (ask me anything), which is now archived. Attendees asked great questions, often helped others with answers that I hadn’t had found time to give yet, and were supportive even when I expected answers disappoint them — such as when we could not give a feature request the priority we expected the requester hoped for. Special thanks to our expert moderator, Darrell (@dr on discord) from Crowd Supply, and to Leia (my daughter) who hosted the video broadcast and lent her voice to your written questions.

Behind the scenes at the DiceKeys AMA, which started before dawn here in Seoul

Behind the scenes at the DiceKeys AMA

Beta Hardware Has Shipped to Testers

Beta DiceKeys have been shipped to everyone who joined our beta program. We were even able to accommodate requests for beta hardware from outside the US. If you asked to join the beta program, we will soon be emailing you instructions for testing your hardware and send us feedback. If you would still like to join, email beta@dicekeys.com.

I’ve added a very important feature we hope you’ll never see. If your camera is unable to scan the face of one of your dice perfectly, or that face is slightly damaged and will appear to have errors regardless of the quality of the scanned image, the DiceKeys app will now ask you to verify that it has accurately corrected the errors and identified the die face correctly. 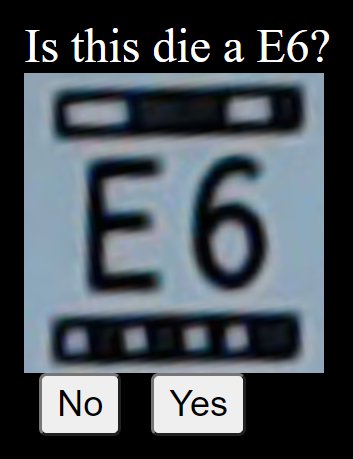 Verifying a die face with a bit error in the overline.

We’ll be using some of the expected proceeds from our campaign to hire a designer, starting with a gig later this month. In the interim, new app features will have very rudimentary design elements (as exemplified by the feature above) so that our designer has as blank a slate as possible to work with. I’ve been restructuring the code to make it easier for a designer to modify.

In the coming weeks I’ll be working on new features to allow you to: