Software Release and Call for Proposals

We’re giving away a handful of XTRX revision 3 boards to the best proposals on how to use them. We’ve also released a bunch of software. But first…

Thank you for your amazing support and all your interest. It’s just over a week since the launch and the campaign is already 63% funded with the first 40% during the first 48 hours. With this rate of pledges we expect to hit the goal much earlier than the 45 days we set for the campaign originally. As Albert, our CEO, said on Slack on the night of the launch, "The last time I stayed up all night watching a number slowly creep up on a screen was for the Brexit vote… This time the outcome will only be positive."

We will be releasing the XTRX software piece by piece as Sergey finishes cleaning it up, starting with smaller pieces and moving towards larger pieces of the code. The code will be in flux a lot for a while even after we push it to a public repository and some pieces may not be as beautiful as we would love them to be. But, following the spirit of "release early, release often," we want to give you a glimpse into what you will get when you receive your XTRX board. The code is being published at https://github.com/xtrx-sdr. We would appreciate your feedback and questions (GitHub issues are a good way to do that).

Our Approach to Dependencies

While building our base stations, we were constantly battling issues with too many dependencies for the most basic parts of the software, like osmo-trx. Some updates may trigger a download of dozens of megabytes of dependencies, which makes updates of remote systems slow and expensive — especially when they are backhauled over VSAT or a similar technology.

We designed our software to be very modular internally, but with only an absolute minimum of external dependencies. It’s written in plain C and depends only on the standard library and a few core libraries.

All host libraries are released under the LGPL-2.1 or Apache (for LMS7002M) licenses, which means you can link them against proprietary applications but all changes to the libraries themselves should be made available to your users. The Linux kernel module is GPL-2.

The architecture of the XTRX software host libraries and modules is shown below. We’ll dive into this in more detail in future updates. 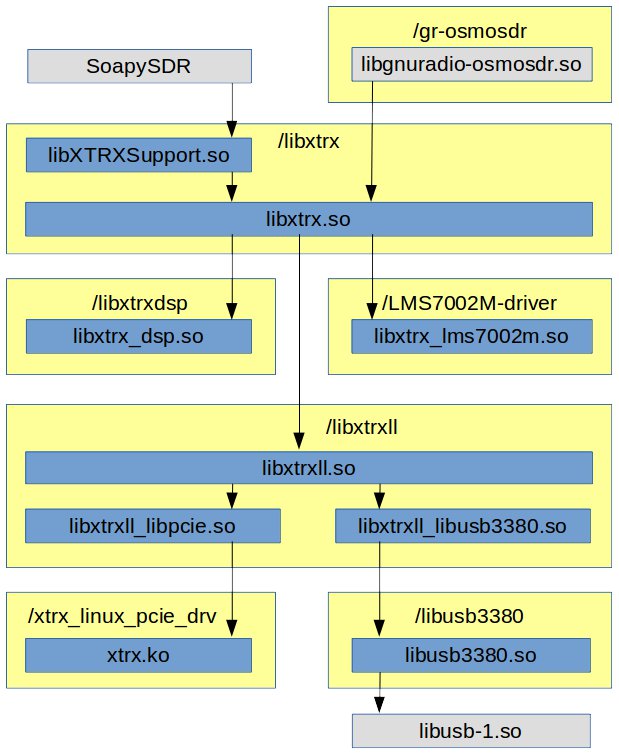 If you’d like to purchase an XTRX but need to pay by means other than credit card, please contact Crowd Supply support.

Whether you’re casually interested in XTRX, already an XTRX backer, or want to help with XTRX development, we’d love to hear from you. We have a limited number of XTRX revision 3 boards that we’ll give away to the best proposals for how to use them. Please take the survey — it’s short and to the point.