It’s a handle! It’s a stand! Gerp is a universal grip for tablets, mobile devices & more. Gerp gets a grip on your gadgets!


Every now and then a product comes along that redefines how things are done. Think about how you typically hold your tablet. Do you have both hands gripped on either side of the screen, letting one loose to swipe or type? Perhaps, you’ve perfected a cockeyed hold, like gripping one edge while supporting the tablet with a forearm? Maybe it’s a combination of changing hand positions just trying to find the most comfortable one? 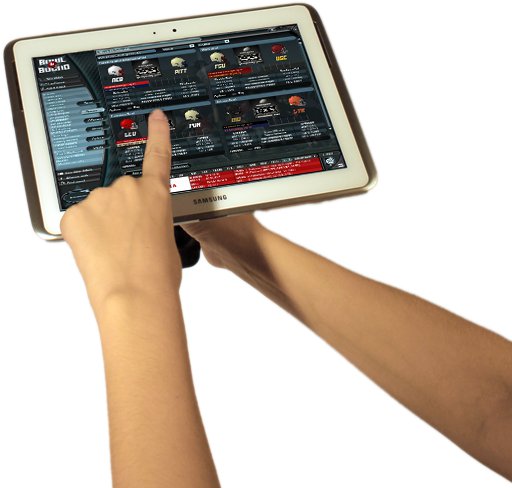 Introducing Gerp. What’s a Gerp? Simply put, Gerp gets a grip on your gadgets. Gerp is an ergonomic grip and versatile stand for tablets, mobile devices & more. What sets the Gerp apart from all the other grips is its ergonomic and universal design. Our patented design features a pistol-style grip (which reduce stress and fatigue on your hands and wrists by working a larger muscle group), and a secure-suction mount, which attaches to any tablet, large-screen phone or any other item that has a smooth, flat, non-porous surface. 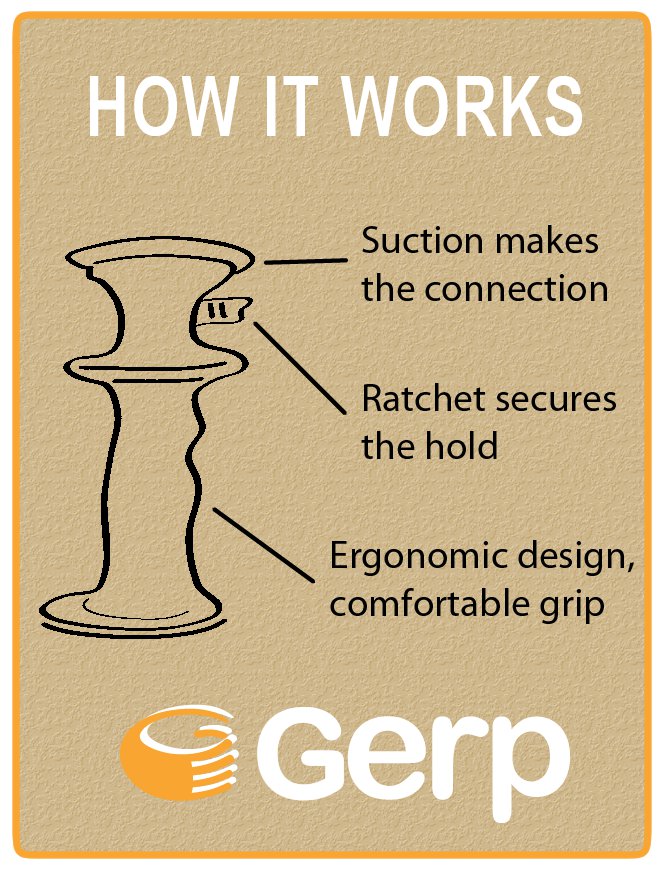 Another great feature of Gerp is its simplicity. You just attach the Gerp suction device to a flat surface (like the back of your iPad® or tablet) then adjust the ratchet until it has a tight hold and you’re done. To remove, just squeeze the ratchet until you hear a pop, twist and pull. Gerp does not require any alterations to your device and it’s ready to go right out of the box. It’s just that easy.

The journey of Gerp began about 13 years ago, pre-tablet era. Our founder, Paul, conceived the idea one Sunday afternoon while eating a heaping plate of nachos on the sofa, watching football with his buddies. Feeling the strain in his wrists from the weight of the overloaded plate, he wanted a better grip. He balled up his fist and placed it underneath the plate. This balancing act relieved the strain; however, visions of cleaning nacho cheese out of the carpet exposed the impracticality of this unsecured grip. Using an old wooden bird perch and some epoxy he retrofitted the first incarnation of Gerp.

12 years later Paul began using a tablet and stylus for his design work. Suddenly that old bird-perch-plate sparked an idea. In March of 2013, Gerp launched with a prototype tablet grip made from spare parts around the house. The prototype worked so well; we couldn’t believe there wasn’t anything like it already on the market. In the last 9 months, we invested every dollar and every spare moment to take Gerp from an idea to a business with product shipping in time for Christmas 2013. 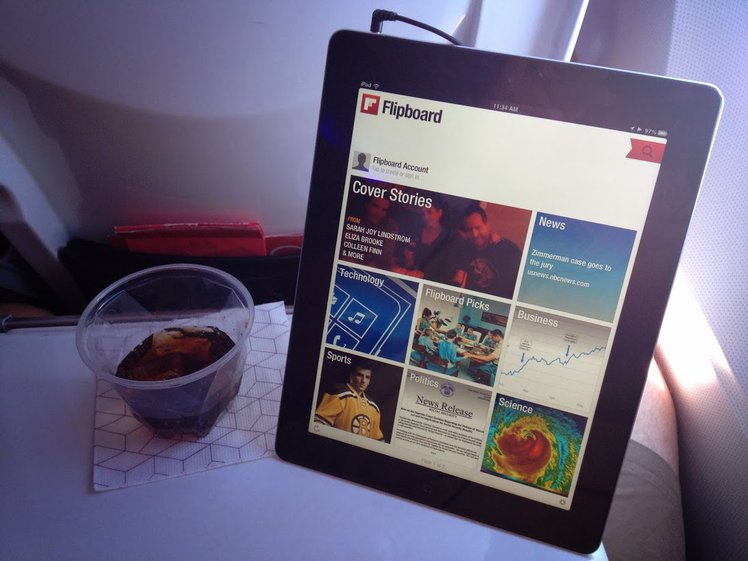 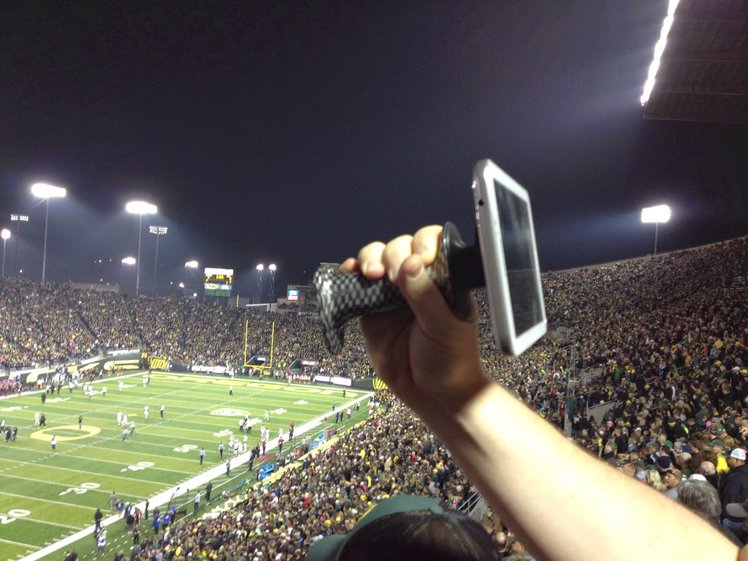 Oh, and remember that plate with the Gerp attached? Not only is Gerp great for tablets, it also works on porcelain & china plates, serving platters, glass, such as a stuck window in need of some leverage; in fact Gerp can be a great multi-tool for many household uses! 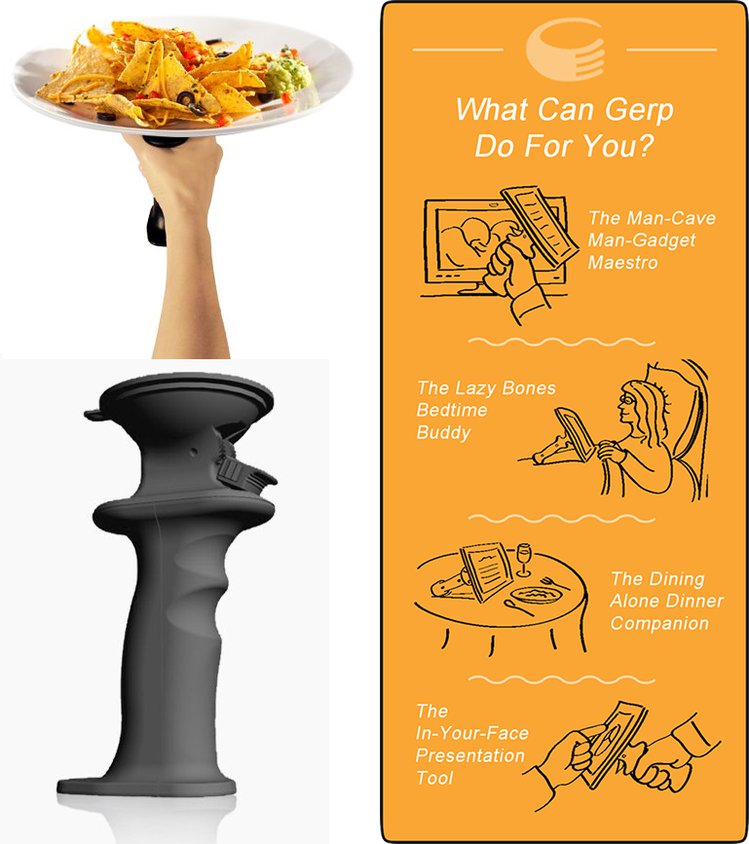 Gerp was born from a simple concept to create a better way to use the gadgets in our daily lives.