After a bit of a slow start, I’ve finally been able to place the big campaign fulfillment orders with our manufacturing partners. PCBWay is working on assembling 400 units worth of PCBs, which we should see at the end of the month. In the meantime, I’ve received the SLA-printed chassis from Wenext! 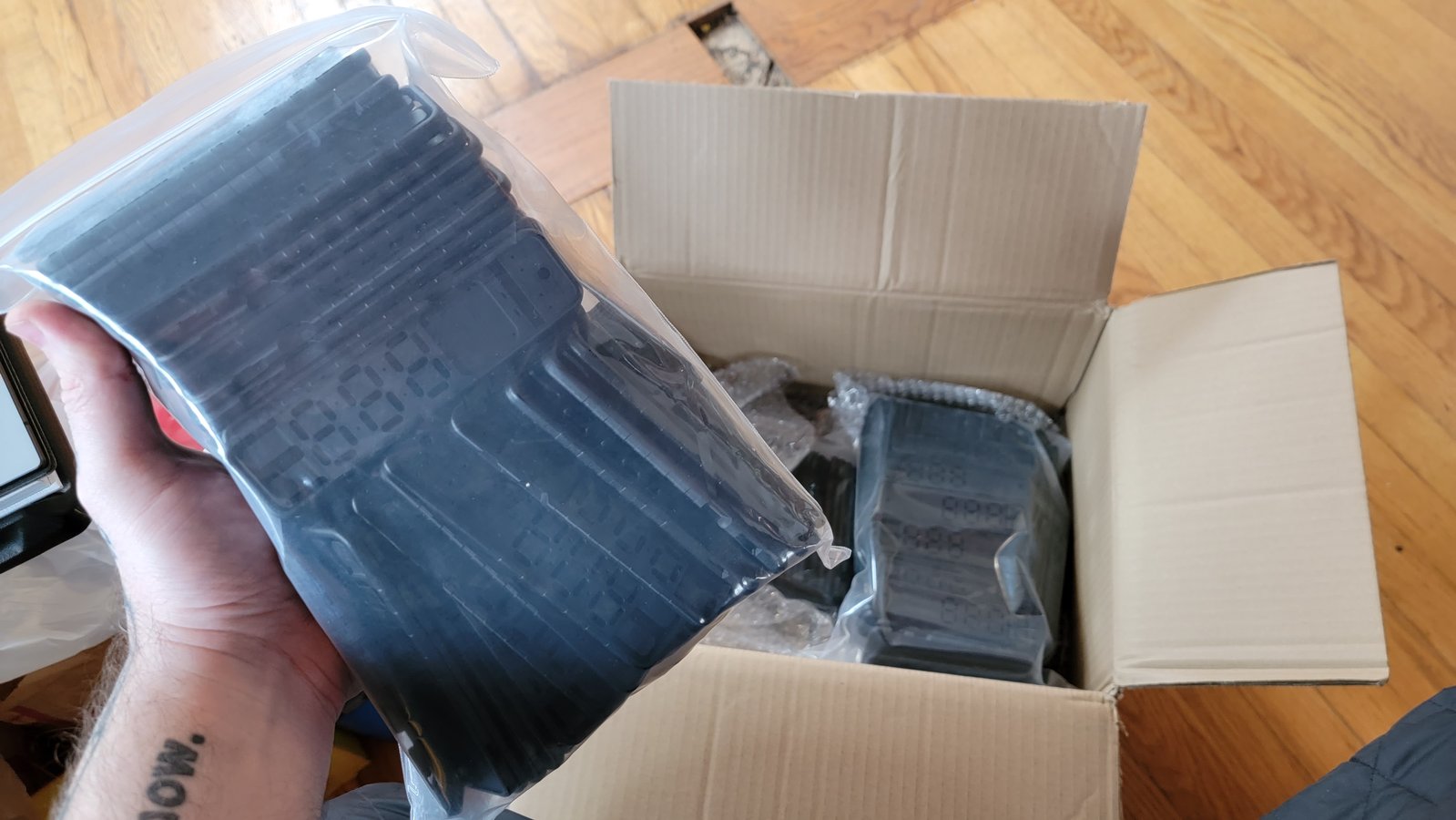 The question that gets asked the most about BeanCounter’s construction is "Why 3D Printing?" I think this question can be answered a few different ways. Firstly, why have a plastic chassis at all? The original prototype BeanCounter was made entirely out of PCBs, which was a fun challenge, but it presented a few obstacles. One problem with the all-PCB version was that the gaps between the PCBs, as well as the relative motion between them, would sometimes trap the carrier tape as it was pulled through the counter. This was only avoidable by very careful alignment of the layers and possibly even the use of adhesives to eliminate the inter-layer gaps. Not only would this have made manufacturing difficult, it would have broken one of my own design rules, which is to never permanently attach anything if you don’t have to. It’s nice to be able to open a thing to fix or modify it, if necessary. This leads us to the other problem with the all-PCB version, which is manufacturing. Originally, BeanCounter was going to be a DIY kit, so the idea of a tool that could be broken out of a single panel of FR4 and then soldered together was more practical. After deciding that it would be sold fully-assembled, I was staring down the possibility of doing that hundreds of times over… not as practical. The plastic chassis serves multiple roles in the BeanCounter: It’s a segment mask for the LED display, it forms the light-wells for the photointerruptors, it holds the two PCBs in alignment, it provides a grip surface, and it even forms the fingers that press the buttons on the bottom PCB when you press on the top of the assembly — saving me having to source very particularly shaped pushbutton switches.

Now it hopefully makes sense why I chose a plastic chassis to connect the two PCBs, but why not have them injection molded? Having designed injection molded parts in the past, I know that this design would be difficult to optimize for that process. The BeanCounter chassis features high aspect-ratio holes in two axes, which would require at least one side-action in the tooling. The more complex these tools get, the more expensive they are, and they don’t start out cheap. Injection molding really makes the most sense when you know that you’ll be pulling thousands of parts, so that the initial expense of the tooling can be effectively amortized over the unit cost of all the parts. If your tooling is simple, maybe this number is lower, because the tooling cost is lower — especially if you make your tooling from aluminum, anticipating a short run to begin with. Because of the complexity of the part and uncertainty about the demand, it didn’t make sense to invest in injection molding for the BeanCounter. On the other hand, commercial SLA printing has reached a point where it’s very cost-competitive! Our 3D Printing partner, Wenext, is currently able to provide us with resin BeanCounter chassis for under $3/unit, and it would cost less if we didn’t require a particular black resin. They’re also fast, it only takes about a week for them to print hundreds of the BeanCounter parts.

There are a lot of options on the market for commercial-scale 3D printing, but I specifically partnered with Wenext for a few reasons. First of all, they provide an instant online quote through the type of interface that feels instantly familiar if you’ve ordered PCBs online in the last few years. You just upload your STL file, select your material, and they spit out a price. Then you can add it to your cart and checkout. As a designer, an instant quote interface is a necessity, because I often want to quote multiple parts or iterations of a part for project-planning reasons, but I don’t want to have a discussion with a salesperson every single time. Another reason why I chose Wenext was their selection of resins. I had initially ordered prototypes from another company, but they weren’t able to provide them in black. Cosmetic considerations aside, the BeanCounter chassis needs to be as optically opaque as possible in order for the photointerruptor-based counting to work correctly. Finally, Wenext support has been absolutely stellar. Whenever I have a question about a design, they’re quick to answer, and they’re not shy about reaching out if they need clarification on a part. I like vendors that ask questions instead of just guessing.

After placing the order for 400 units of the BeanCounter design, it was only about 2.5 weeks before there was a big box on my doorstep full of parts. They were well-packaged for shipping, the box marked with instructions for reporting damage, and they appear to have all survived the journey from Shenzhen! Expect an update in January about receiving the PCBWay order. Until then, if you have any questions about BeanCounter or the campaign in general, you are always welcome to contact me at nick@greatbigfactory.com