The RGGBer campaign is off to a great start. We’ve made 90% of our goal already. Keep spreading the word! In this update, we’re going to look more closely at a common use case for RGGBer: HD camera machine vision. 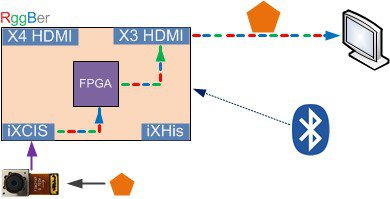 As explained in the OV5640 camera module’s Firmware User Guide, the embedded auto-focus functions are controlled by the built-in MCU of the OV5640, and have very fast auto-focus speed compared to external implementations. In the video demo below, you can see the AF speed is less than three seconds. RGGBer Dev Kit provides auto-focus firmware code that can be downloaded by RGGBer’s on-board MCU to the OV5640.

RGGBer provides the OV5640 initial setting code to make sure that the OV5640 ouputs 1080p video with the correct pixel format.

OV5640 receives setting date and AF firmware via Omnivison’s Serial Camera Control Bus(SCCB). It is quite similar to a general I2C bus. RGGBer provides an SCCB driver to user for all OV5640 setting tasks.

In rev.4 of the RGGBer Dev Kit, the FPGA will be able to directly configure the OV5640, leaving the on-board MCU available for other options. We will update the reference design to support the latest hardware before shipping.