In this update, we’ll provide an update on the progress of KrakenSDR that occurred throughout February.

Chinese New Year holidays ended around mid-Feb, and the factories involved are back into the production of the KrakenSDR!

Since the previous update, we’ve received the latest enclosure prototypes, tested them, found them to be great, and so we have locked them in for production. As mentioned previously, we have now included a fan which stops the KrakenSDR from getting too hot in very warm ambient environments or environments with totally stagnant airflow. 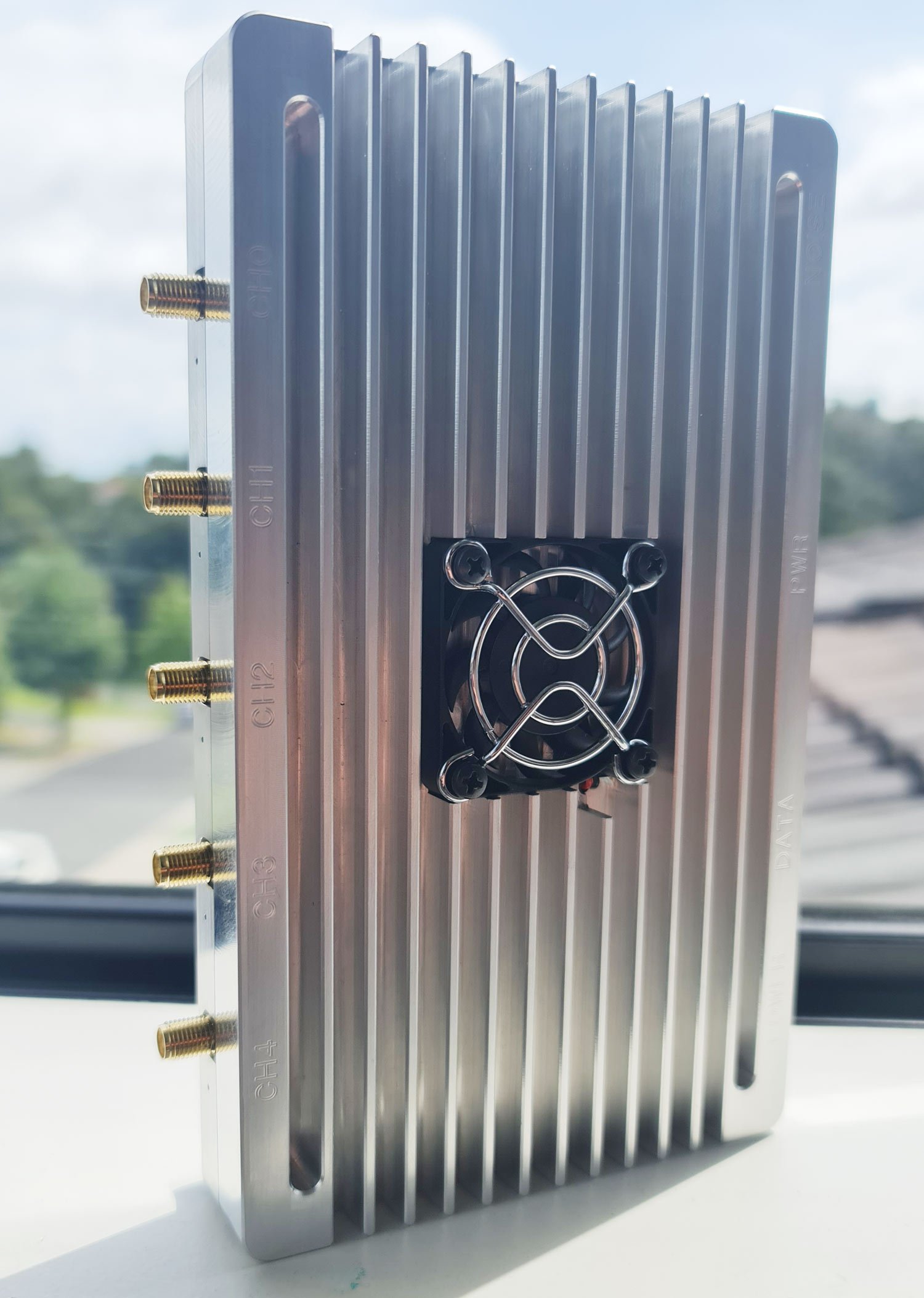 Please note that the prototype enclosure in the photo is missing some finishing touches. In the actual production batch, the enclosure will be black anodized, with the logo laser-etched on the USB port side. Black anodizing not only looks good, but it’s much cooler to the touch when hot, in comparison to a shiny metal color. One issue is that anodizing removes electrical conductivity, which is bad for shielding, but we will be ensuring that conductivity to the ground of the PCB is maintained via internal grounding screws. The grill will also be black, and the five SMA ports will have nuts.

Overall, things are progressing smoothly, but unfortunately we have experienced some unexpected delays that mean we are a little behind schedule. Apart from the Chinese New Year holidays knocking out two weeks of February, these additional delays include:

Despite these slowdowns, we’re making progress and are in the process of setting up the factory QC procedure ready for the testing of the first batch of 1000 units.

Assuming the components stuck with FedEx are not delayed further, we expect that we will be able to begin shipping small numbers to Mouser around the end of March, and units will be trickling in over a few weeks from then onward, as the enclosure takes time to produce. As Mouser receives them they will process and send them out to customers.

For customers who have ordered the antenna set, we have created a new type of magnetic whip which we think is better than any low cost antenna on the market for direction finding use cases. It consists of a strong rubberized magnetic base, a modified SMA tee adapter which screws into the base, a telescopic whip antenna, and 2M of removable LMR100 cable. Unlike some cheap antennas that have poor or even no ground connection, our magnetic base has a flanged metal base that is connected to the ground of the coax cable. This allows for a good capacitive ground plane connection to the roof of the car, whilst still protecting the car roof from scratches that a metal base could cause. The LMR100 cable is also going to be built to tolerance, and then a set of 5 cables will be phase matched via grouping, which improves direction finding accuracy.

We will have more updates and photos of the antennas within the next few weeks.

At the moment, our core software features are complete, and we are focusing hard on completing the hardware production. But when possible, we are still working on some more advanced features such as multi-channel tuning. We have found that this requires a change to the coherent calibration algorithm which is somewhat computationally intensive for a Pi 4. Fortunately, our DSP engineer does have some good ideas on how we can implement this much more efficiently and we hope to be implementing those ideas within the next few weeks. The multi-channel update will allow the user to ‘click to tune’ within the active maximum 2.56 MHz bandwidth via the spectrum display, as well being able to monitor bearings from multiple narrowband channels within that bandwidth at the same time. The multiplatform networked mapping software that we are working on will be designed to plot all those bearings at once.

We have also completed a preliminary investigation into the possibility of using the GPU on the Pi 4 to compute the FFTs required in our algorithms faster via Vulkan and VkFFT. Long story short, for larger FFTs it seems that the Pi 4 GPU is capable of about a 2x speedup. However, an issue is that the Pi 4 Vulkan implementation is very new, and in it’s current state is missing an important feature relating to memory transfer. Without this feature, there is a need to perform unnecessary memory transfers and this brings us back to a 1x speedup. But we have considered that even without any speedup, using the GPU essentially provides us with another computational core which may still be of use as it frees up the CPU cores for other tasks. We hope to put a Pi 4 GPU implementation into practice later this year, and we have heard that the memory extension is being worked on by the people behind the Pi 4 Vulkan driver. But for now, for demanding multi-channel or passive radar applications it may be preferable to consider alternative computing hardware like the Jetson Nano which has much better GPU support. We will be testing this hardware platform within the next few months as well.

We are also working on creating the paper manual which is a regulatory requirement for European customers. Once finished, we will also upload a PDF, however our main documentation will be uploaded either on the GitHub or over on our krakenrf.com website. The manual will include information about setting up the hardware, using the software, and setting up the antennas.