In the previous update, we noted how COVID lockdown in Shenzhen had halted our manufacturing. We’re happy to now say that lockdowns in the Shenzhen area have eased, and manufacturing is back in progress. There is still the risk that lockdowns could come back at any time, but for now we are able to continue making manufacturing progress. We’re also seeing possible ripple effect issues stemming from the ongoing Shanghai lockdown, but we are working around those.

Below are some shots of the PCBs in manufacturing. 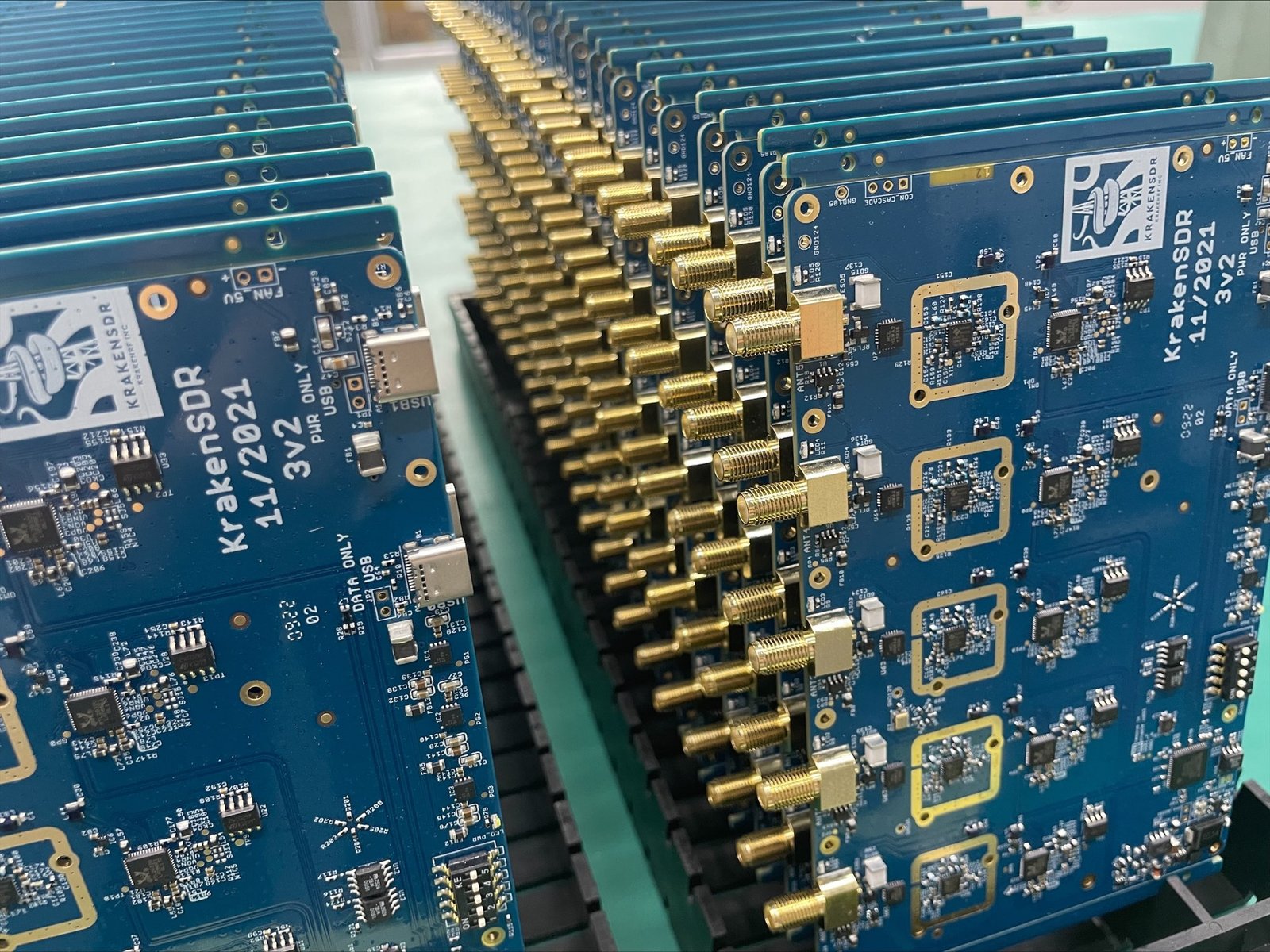 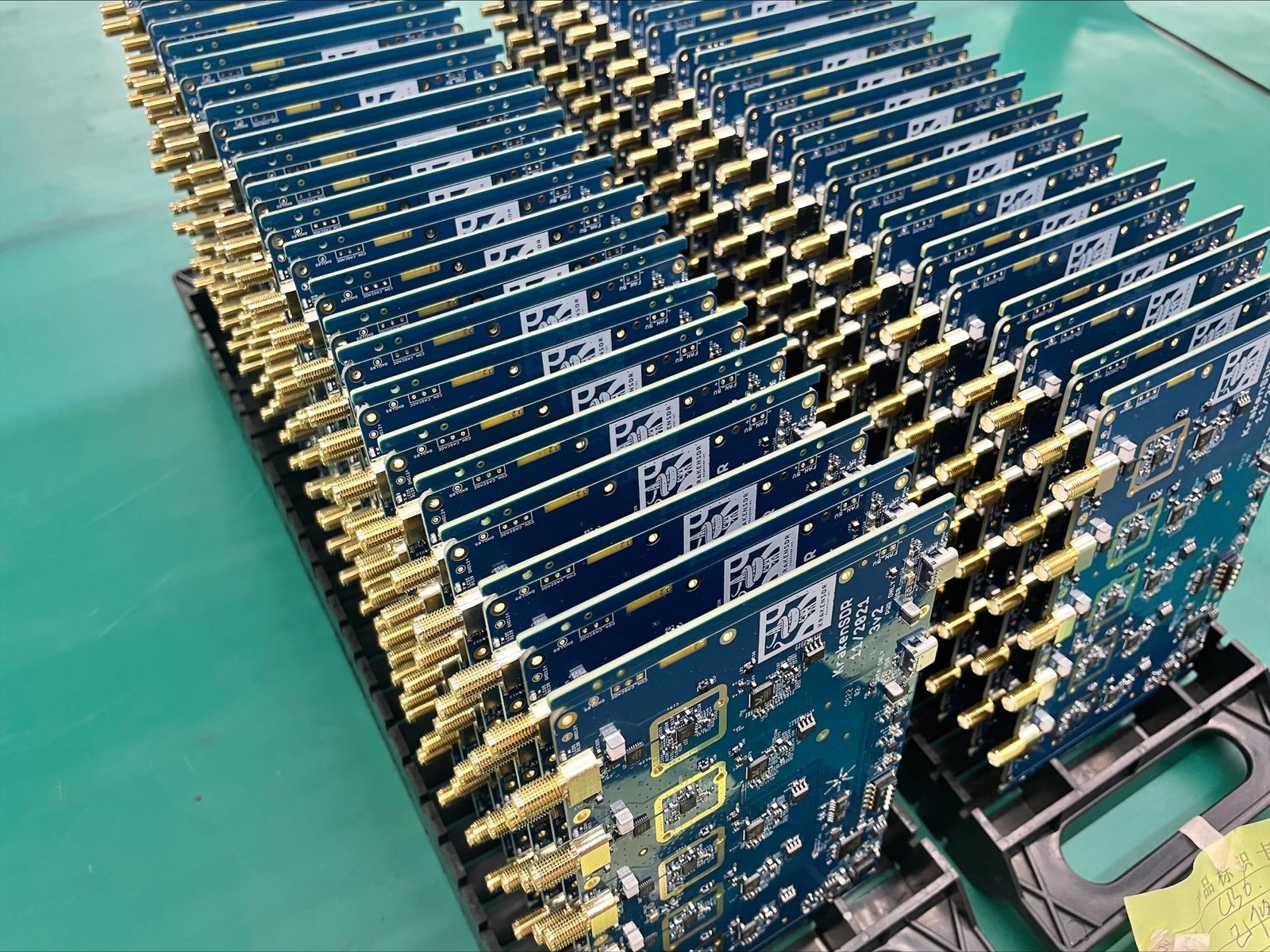 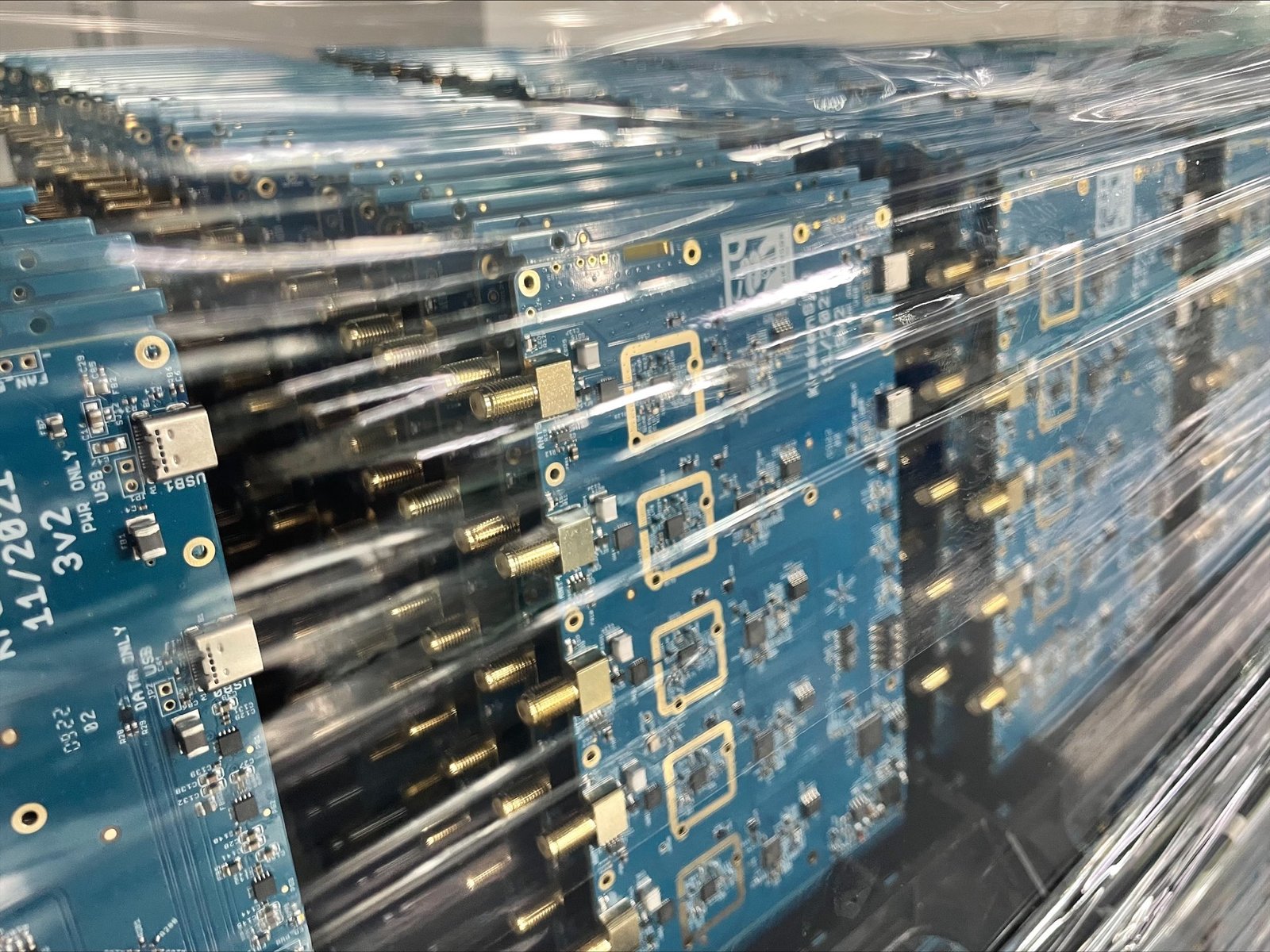 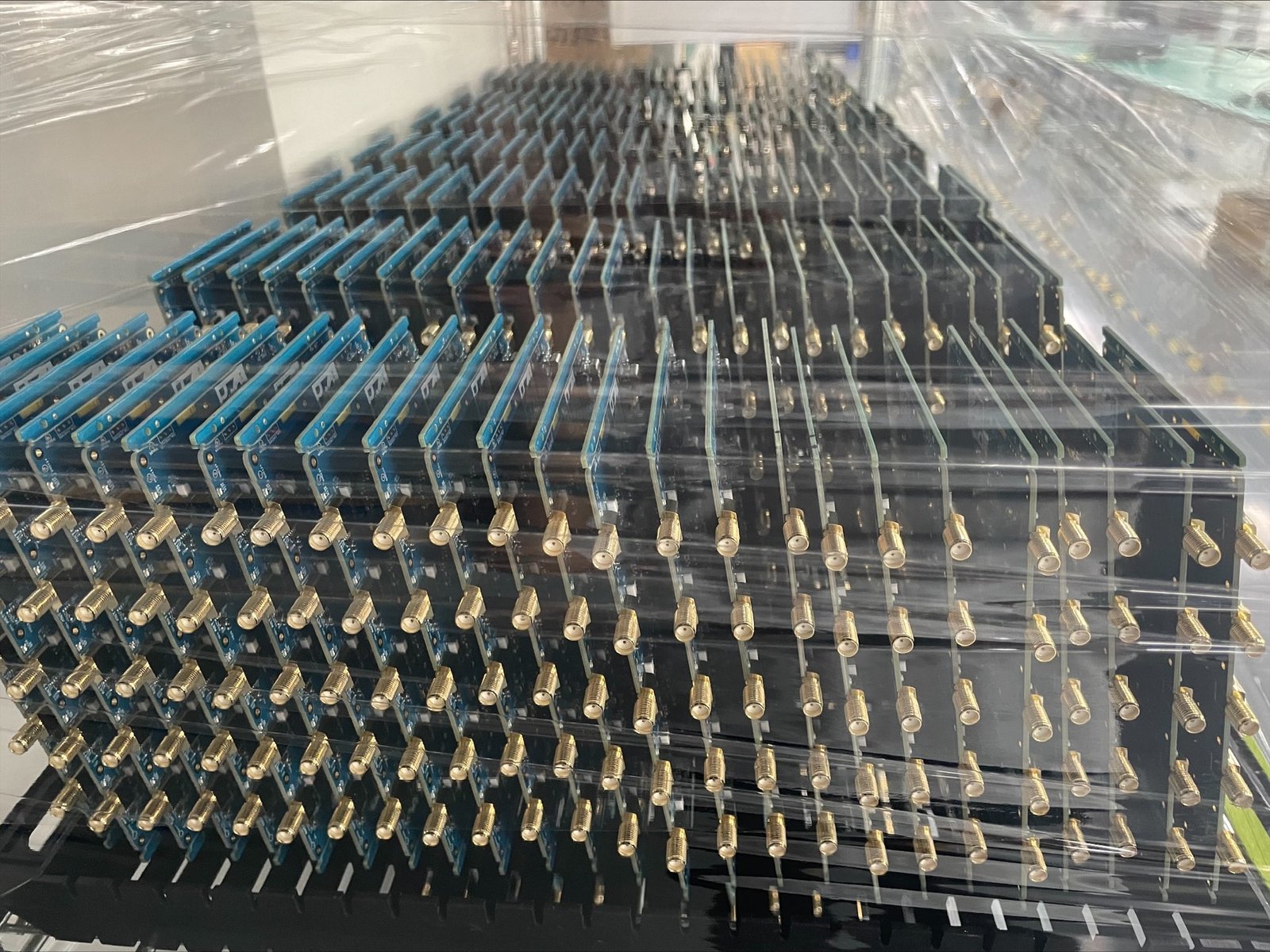 Below is a photo of the enclosures being produced. Manufacturing of the enclosures is a slow process as each one takes several hours on the CNC machine to be cut. In the future batches we will be able to move to a more efficient casting process. 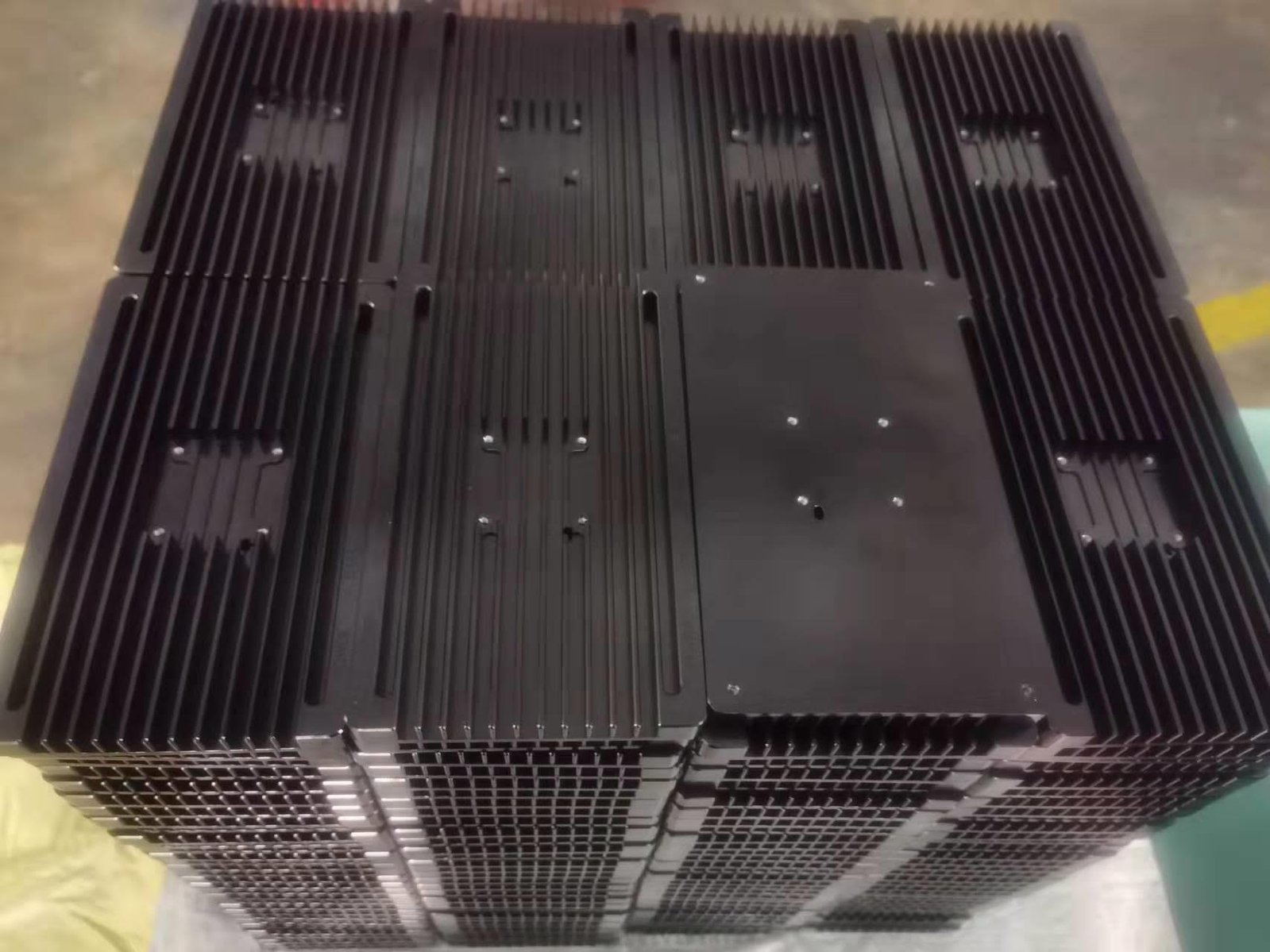 Due to the lockdowns and overall slow global shipping, we are still waiting on various bits of samples to arrive at our offices to be confirmed for production. But, for now, we have confirmed and already have on order the antenna base, tee connector and cable. It is likely that the antennas will finish production after the KrakenSDR units, so they may ship separately.

The base is a 45mm diameter metal disk with rubber sleeve and strong neodymium magnets. This is what is commonly used for photography and GoPro camera mounts on vehicles.

We have created a custom SMA tee that screws into the photography mount on the base.

Finally we have 2M of LMR100 cabling in phase grouped sets of 5.

The telescopic whip is the final part we are waiting on confirming manufacturing samples for. 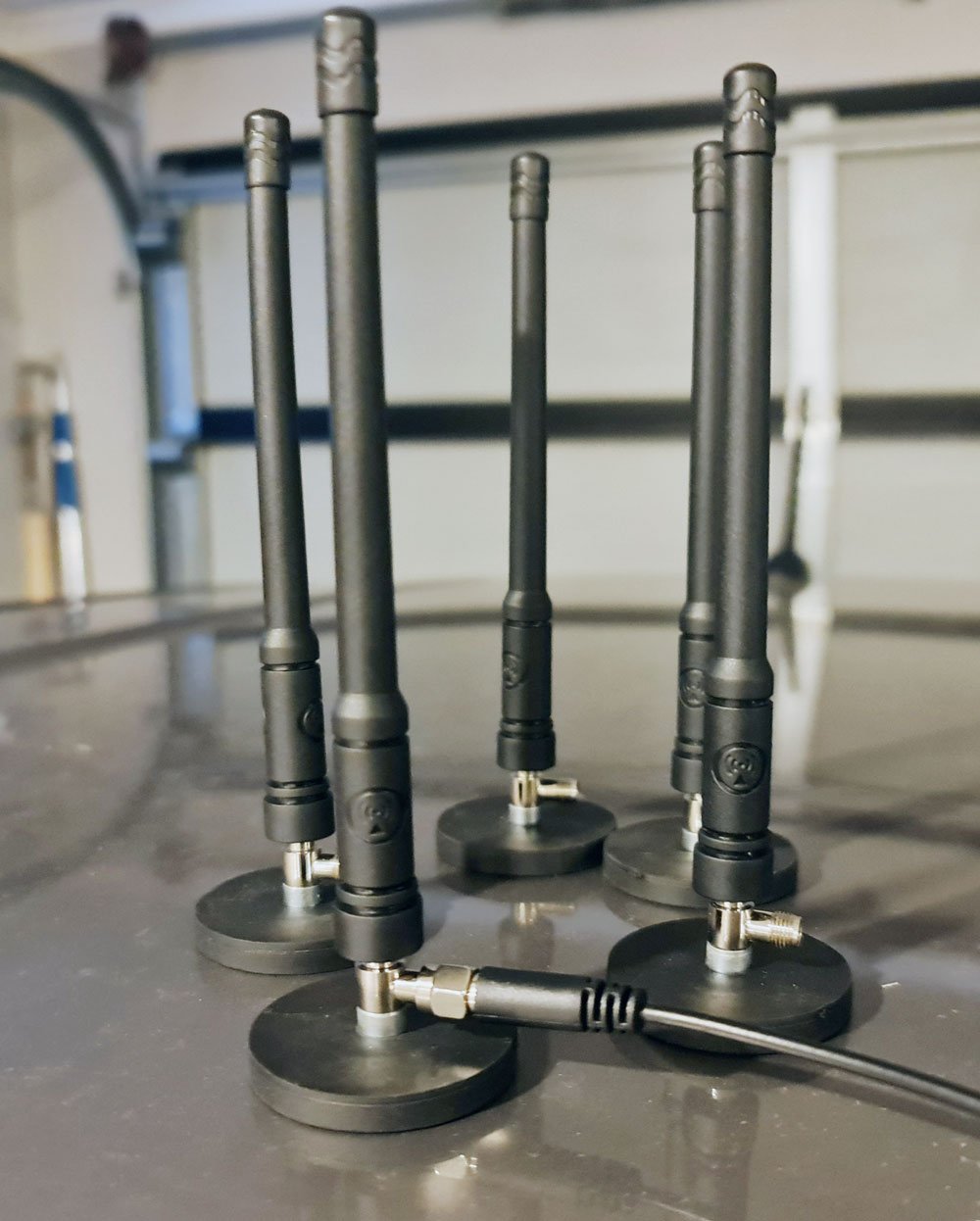 We chose this custom route for the antennas for a few reasons.

All the low cost commercial mag mount antennas we have seen are generally of poor quality with large precision tolerances in between units.

First, almost all of them used coax cable that is soldered directly to the antenna connection within the base. That type of construction can result in imprecise tolerance variances in how long the coax cable is, and how effective the antenna ends up being for each individual base. Instead, we are providing sets of five fixed length SMA male terminated LMR100 coax cabling, which can be constructed with much tighter tolerance, and then further measured and grouped into phase matched sets. This is important for optimal operation of the direction finding system.

Secondly, a lot of low cost magnetic mount bases do not provide any sort of ground coupling. Ground coupling is important as it improves the radiation pattern and SWR matching of the antenna. Without ground coupling, each antenna could end up having wildly different radiation patterns which could degrade results. The metal base in the photography mag mount is electrically connected to ground via the SMA tee, and is capacitively coupled to any larger ground plane.

Thirdly, many bases are metal, and can cause scratches to the paint of the vehicle. The rubberized sleeve on these bases ensures no damage.

Finally a lot of the bases we tested had issues with QC. Some had slanted antenna screws, others had weak magnets that fell off, and some had poor SMA crimping.

We wanted to note that CE and other compliance testing has now been completed successfully.

Further developments to the KrakenSDR core software have been made.

The image can be downloaded from https://drive.google.com/file/d/1JT41DfkaYNSgGlxqaAvUwHQO_NwXewRW/view?usp=sharing. More instructions on the GitHub at https://github.com/krakenrf/krakensdr_doa. KerberosSDR users, please note that you’ll need to first set the "KerberosSDR Default" preset under basic daq settings and click on Reconfigure as the first thing you do.

The code is also tested to run on Linux x86 machines, and due to the global Raspberry Pi 4 shortage, we are also looking at supporting other SBCs that are in stock such as Odroids.

We have also now officially released the KrakenSDR Android App on the Google Play store which can be found at https://play.google.com/store/apps/details?id=com.krakensdr.krakendoa

The core software now outputs data compatible with the KrakenSDR Android App by default, but it can be switched back to the Kerberos app data format too if you prefer the older app. Support for the third part DF Aggregator software has also been added thanks to third party source code contributors. 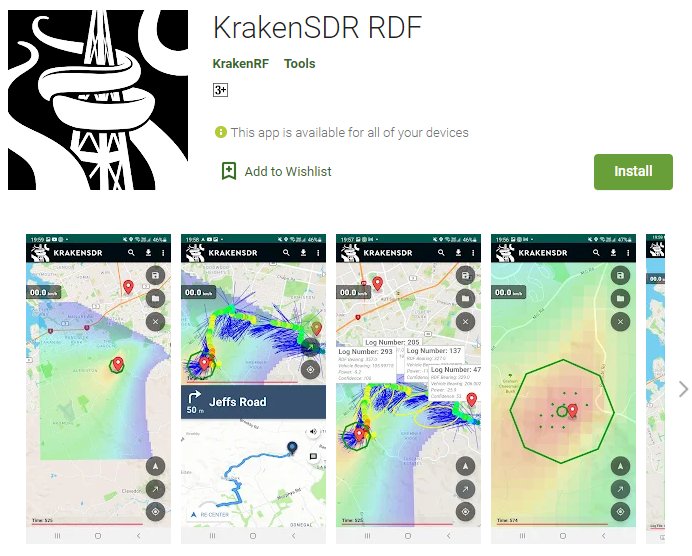