Medical imaging can actually be done with any form of energy. You could do it with sound waves - acoustic impedance tomography, or using alternating currents. Alternating currents are the most cost effective since acoustic transducers are still expensive. Microwaves and light could work too, but there are different scattering effects that need to be accounted for. The trick is to pick a form of energy that gives you the information you want.

Computed tomography, specifically back projection - is the most popular method for reconstructing an image from impedance data. In CATSCANs, the impedance data is measured by the attenuation of X-Rays, whereas in Spectra we use alternating current for the electrical impedance tomography technique. Alternating current at low levels has the advantage of being safe and non-ionizing compared to X-Rays, making it an ideal way to hack and experiment with medical imaging techniques.

The best way to understand what EIT can measure is to look at an individual cell as an electrical circuit made up of resistors and capacitors. The below diagram is a basic model of a cell. This basic electrical cell modelling is the fundamental element for the tomographic models, which are often oversimplified to be simple resistor networks to make computation easier.

The characteristics of the population’s plasma membranes, cell volumes, and intra and extracellular conductivities influence the impedance spectrum. The impedance spectrum is obtained by applying varying alternating currents from 100 Hz up to 80 kHz in the Spectra device to obtain dielectric properties between the emitting and receiving electrodes.

Electrical impedance model of a biological cell suspended in extracellular fluid with the equivalent electrical model.

In the above picture you can see how low frequencies (roughly below 1 kHz) go around the cell membrane, whereas higher frequencies can go straight though it. This information gives the bioimpedance spectrums shown below, from which we can determine subtle changes in the dielectric material. This is a powerful technique on its own, and can be used in conjunction with EIT to reveal even more information. 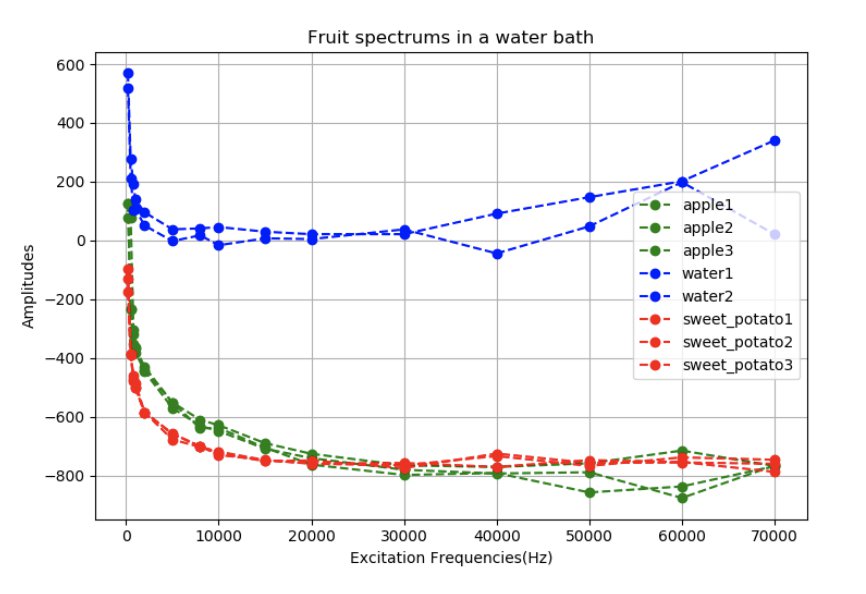 Dielectric spectrums obtrained at a single voxel in space over a frequency range between 100 Hz and 80 kHz using the Spectra EIT device. The spectrums of different materials can be clearly differentiated on a repeatable basis.

Moving up to the tomogram scale, EIT systems apply small alternating currents at a single frequency (EIT), or multiple frequencies (MFEIT) to obtain dielectric spectrums at localized points in space. Small alternating currents ranging from a few nA and up are applied, with the resulting equipotentials being recorded from the other electrodes. This process is then repeated for different electrode configurations and finally results in a two- or three-dimensional tomogram according to the image reconstruction algorithms incorporated.

Current stimulation and equipotential lines for a single measurement.

How do you reconstruct an image? 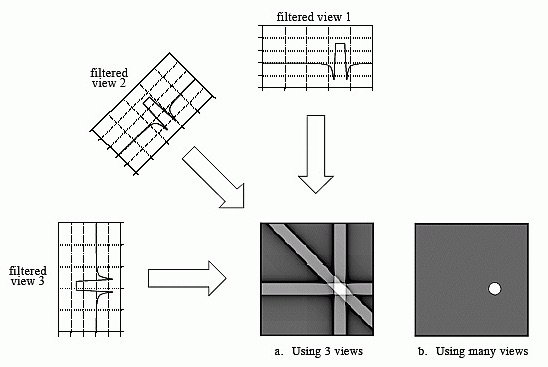 The basis for tomographic imaging was laid down by Johann Radon. By making many measurements between different sets of electrodes, we can infer what’s happening between them. The image reconstruction problem is then based on lining up these impedance measures - ‘projections’ - and performing an inverse Radon transform. The more measurements you are able to make, the better the spatial resolution will be. EIT’s maximum spatial resolution is approximately 15% of the electrode array spacing diameter, though it’s also dependent on the electrode geometry.

Spectra has 32 electrodes - enough to clearly see you are recreating the cross-section of the sample and to experiment with ideas of medical imaging, whereas a typical CATSCAN has an array of 256 which it rotates around your body to increase the number of measurements again. One limitation of the back projection algorithm is it assumes current flows in straight lines, which is incorrect. Spectra comes with a few other more advanced algorithm choices that make fewer assumptions and require finite element meshes, such as Gauss-Newton and Graz Consensus image reconstruction methods. They are all contained in the Open EIT GitHub repositories. We’d like to thank Ben Yuan Li for his excellent work making these algorithms available in Python, and Andy Adler for his original algorithm implementations in EIDORS. 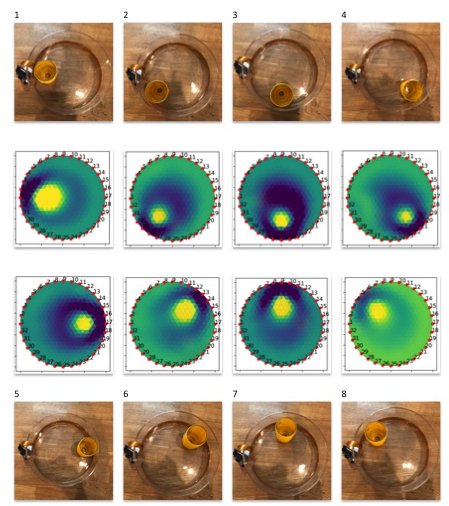 The precise location of the cup is reconstructed as it is moved anti-clockwise around the tank, purely from alternating current measures taken at 50 kHz.

Since EIT has been confined to big carts of expensive equipment in medical imaging labs, very little work has been done to use machine learning to improve image reconstruction - and we think this is a great hotspot for improvements. If we could combine EIT with deep learning algorithms, we could make excellent and cheap diagnostics sensors!

Those are the basics of how it works. Stay tuned for updates on lung expansion measures, gestural control, and more!