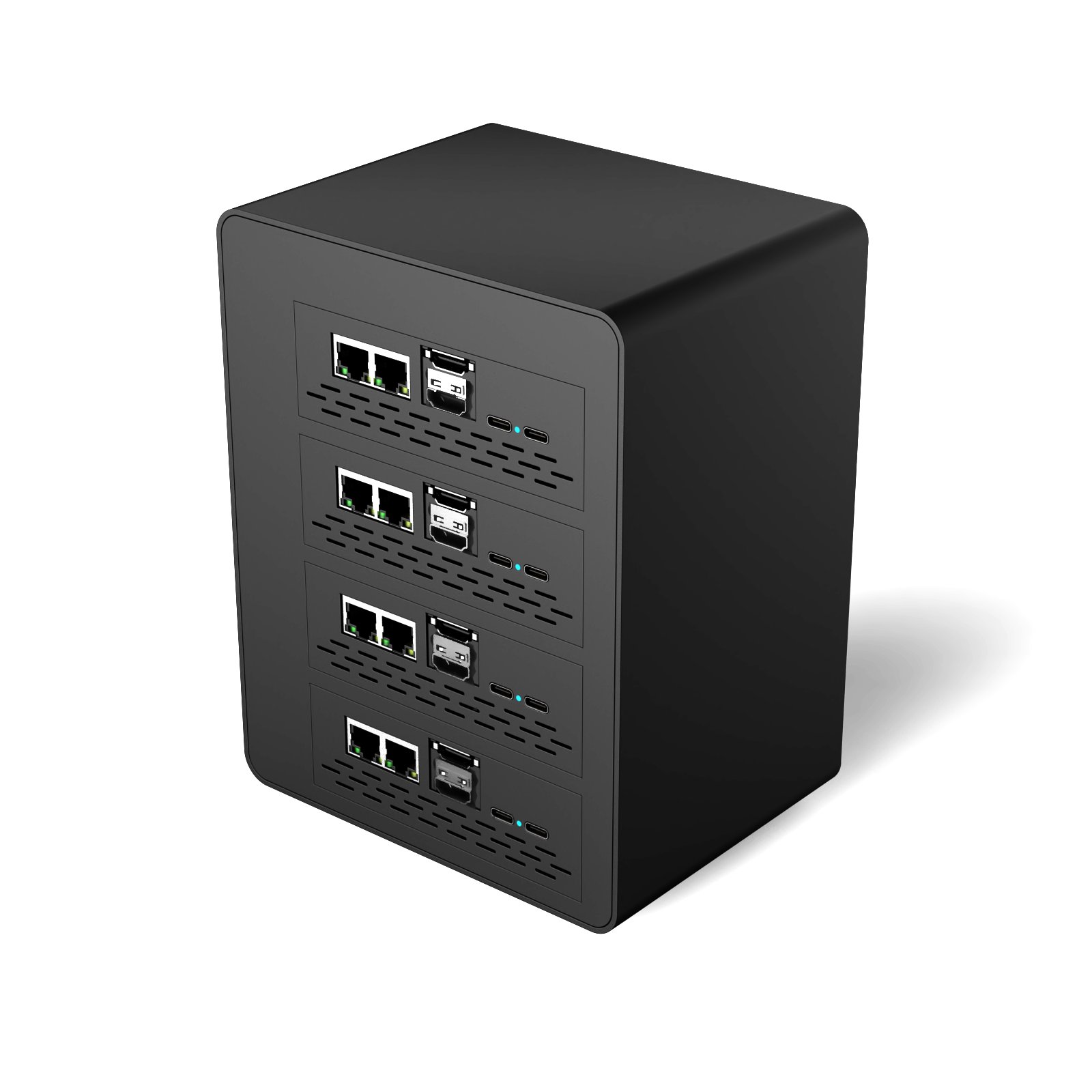 Mixtile Blade 3 is a cluster-oriented single board computer (SBC). It’s tiny, it’s powerful, and, most importantly, it has super-fast interfaces with convenient connectors that facilitate clustering. We have four topology plans for building a simple cluster with Mixtile Blade 3:

Using our ClusterBox With a Built-in PCIe Switch

The easiest and best performing solution is to build your cluster using our Four-Node ClusterBox, which includes a built-in PCIe Gen3 switch capable of connecting up to four Blade 3s and providing a 16 Gbps channel for each. When using Linux, each system on the board will simulate a 16 Gbps Ethernet interface that is already connected to the switch network. The switch offers an IP address to every system via DHCP.

It’s fast and inexpensive. Compared to a 5-port, 10-Gb Ethernet switch, a ClusterBox solution has a lower cost and better performance (16 Gbps vs. 10 Gbps).

A ClusterBox is an additional expense relative to either daisychain-based solution.

This may be the most balanced solution in terms of cost and performance. If you connect several Blade 3s in sequence with SFF-8643 cables and add a breakout board, each Blade 3 will lead out the following interfaces: two SFF-8643 (PCIe A and PCIe B), one SATA, and one 12 V DC-IN interfaces. When using Linux, each system on the board will simulate two 16 Gbps Ethernet interfaces. You will then need to set up a network bridge containing the two interfaces on every system to ensure that data packets can pass through them.

A lower cost for interconnection. Useful for developing an intuitive understanding of the daisychain topology.

Less available bandwidth and higher CPU usage. The PCIe daisychain solution also has a single point of failure: the whole cluster will go down if one node crashes.

Blade 3 has two 2.5-Gb Ethernet interfaces that we can use to form a daisychain via Ethernet. As with the PCIe daisychain plan, you will have to set up a network bridge in the system to exchange data packets.

This is the lowest-cost solution as it requires nothing but three CAT-6 Ethernet cables.

Only 2.5 Gbps of bandwidth and the same single-point-of-failure issue as a PCIe daisychain.

By using both 2.5-Gb Ethernet ports, you can provide 5 Gbps of bandwidth through a link-aggregation group if you have an LACP-supported Ethernet switch. 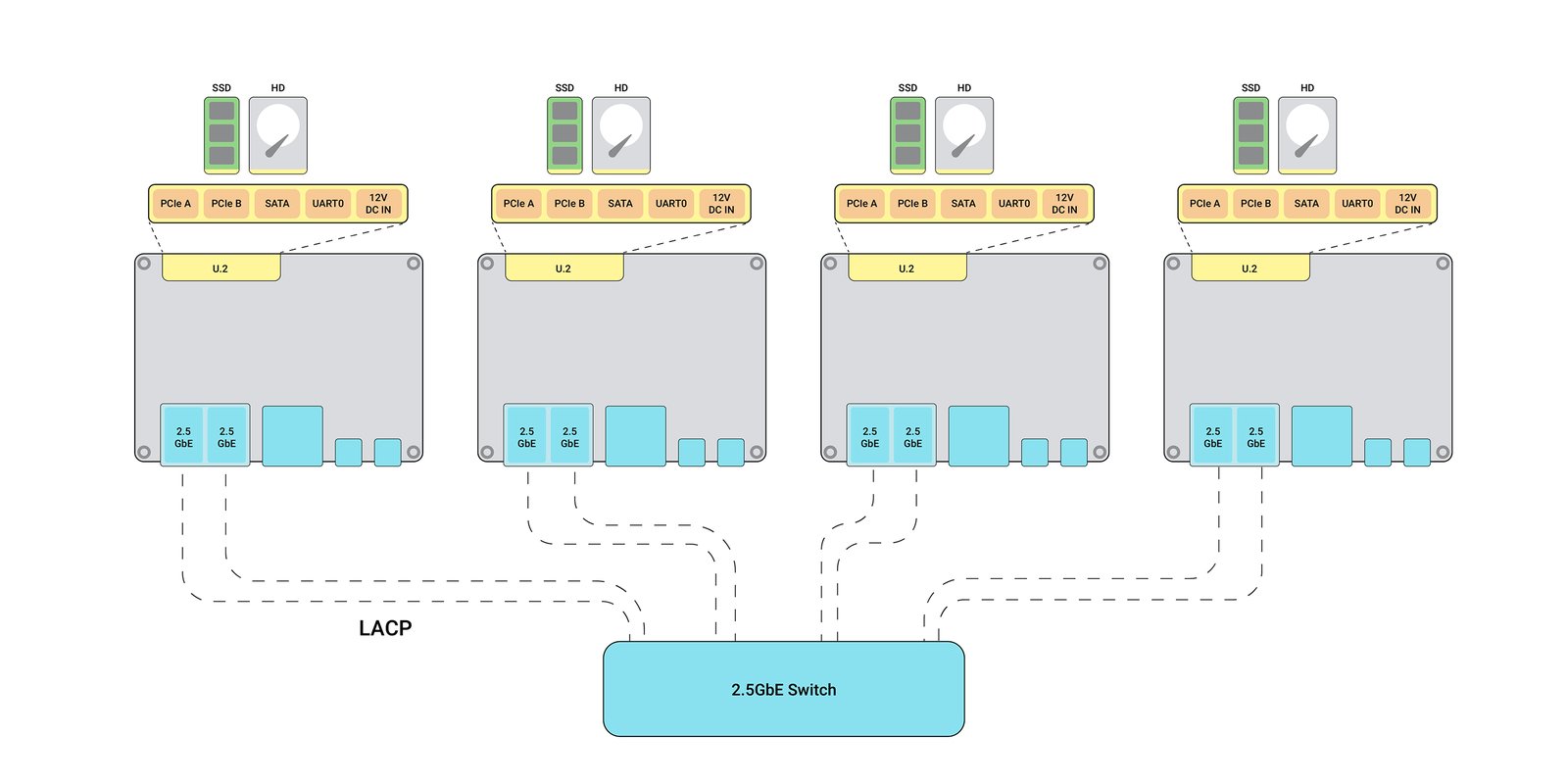 This is the most traditional solution and probably the easiest to understand.

A 10-port, LACP-supported, 2.5-Gb Ethernet switch is much more expensive than our Four-Node ClusterBox and provides less than one-third of the bandwidth.

Q: What is the operating system of Blade 3? A: Blade 3 ships with a customized version of Debian 11 and supports other Linux distributions as well as Android 12.

Q: Can Blade 3 run a discrete AI accelerator or leverage graphics-card-based AI acceleration? What are the flops of the board in AI workloads? A: The RK3588 has a built-in NPU with processing performance 6 TOPS. Supported deep learning frameworks include TensorFlow, Caffe, Tflite, Pytorch, Onnx NN, and Android NN, among others.

Q: Can I use it as a miner? A: Blade 3 can mine CPU-mineable cryptocurrencies such as Monero, VerusCoin, etc. (This is not investment advice.)

Q: Is the SATA power supply compatible with the physical U.2 port? A: Yes, Blade 3 supports 12V DC SATA power. You can use a breakout cable (like this one) to power it.

Q: Why is there no 32-GB option? A: We cannot currently manufacture an RK3588 board with 32 GB of RAM due to a global shortage of large-capacity LPDDR components. If the supply-chain situation improves in Q4 of this year, we will produce a 32-GB version.